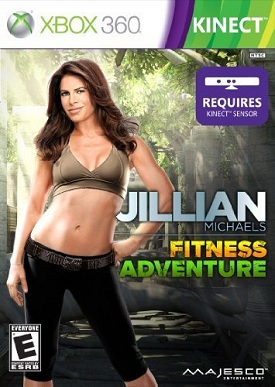 Overview:
With the advent of motion gaming, exercise groups quickly believed they could get gamers or more fitness oriented people to try a completely new aspect that was before unheard of. That of course, is to create a video game that will make people get off of their couch and exercise in the comfort of their own home. We’ve seen multiple titles take advantage of this on the Wii, and even more recently on the Kinect from Microsoft.

Now despite various exercise titles being released since the Kinect’s launch, most of them always shared one thing in common. The player would always be exercising either in a gym or a simple setting with little actual visual flair. Now we have Jillian Michaels’ Fitness Adventure, a title which focuses around exercise but will take players on an adventure through a jungle as well. With it of course is the relatively well known fitness instructor Jillian Michaels, but does her inclusion and unique environment make this exercise game worth your time?

Visuals:
One of the unique features about Jillian Michaels Fitness Adventure is that rather than work out in a gym environment or something similar, your workout environment, or at least the in-game environment I should say is actually outdoors and usually jungle themed. Thankfully the backgrounds are at least decent looking, though they don’t go above and beyond just providing a backdrop which is a shame, though the Adventure mode traps and environmental interactions are at least passable. 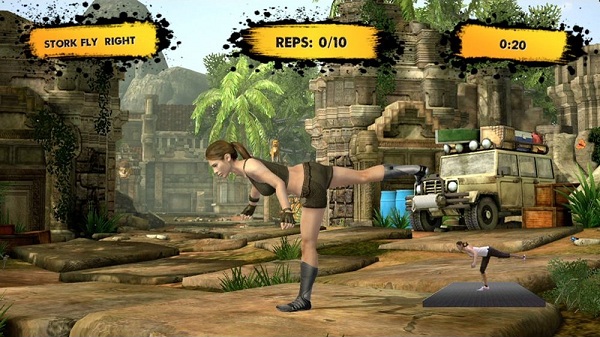 The only other thing you will be seeing is of course, Jillian Michael herself. Jillian is wearing the same outfit on the cover of the game and there are no customization options, nor does her facial expression ever change. You will just see constantly repeated moves as you watch her demonstrate an exercise in front of you that you are supposed to mimic. This grows to be quite boring after a short time as you are always forced to see the same exact motion with the same exact presentation again and again and again ad nauseum.

Being that this is a Kinect title; the Kinect will “scan” the player and place their image in the game’s lower right hand corner. Rather than provide a simple outline the game provides a full colored image of the player which is a nice touch, though the only demonstration of whether or not you are doing the exercise moves correctly are faint outlines that appear after you have already finished it.

Audio:
As you turn on the title you are cheerfully greeted by Jillian Michaels’ voice without actually seeing her of course. You best grow used to hearing that voice, as she is the only character in the entire game and you are going to be hearing plenty from her and while there is some minor repetitive jungle themed music with way too many monkey noises in the background that grows old very quickly. Jillian Michaels provides commentary on practically everything you do, if you are doing something wrong she will scold you mercilessly, if you do something right she’ll give you a minor compliment. 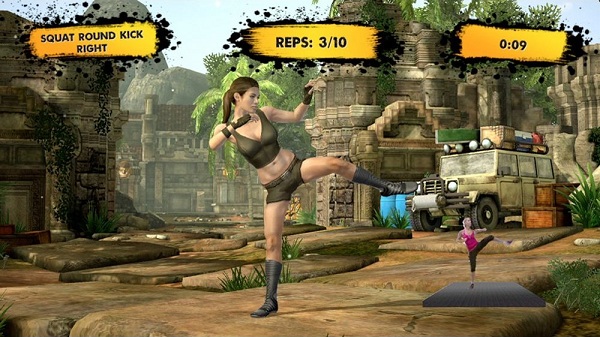 In the end it feels like her compliments are bare minimum to what you would usually hear, as Jillian Michaels seems to want to squash any motivation you’d have to even exercise as she constantly chastises the player with comments about their failures, while truth be told it is mostly the failures of the game itself that should be chastised.

Gameplay:
The first time that you start up the title and make it past the initial player scan, the game will ask that you set up your fitness profile so it can calculate your BMI (Body Mass Index). This includes putting in your age, your height, your weight and your gender with the end result being a BMI of some sort. Now while this sounds unique at first, I found no differences in the workout routines of someone who was malnourished, average or morbidly obese according to the BMI ratings.

Now one of the most important parts to most Kinect games is that they have a relatively easy to navigate menu system. Jillian Michaels’ Fitness Adventure’s menu is unfortunately a bit difficult to use due to poor detection of either lifting or lowering the right arm to move through the various options, most of the time moving far too fast to accurately select your choice the first time around.

Now on to the fitness, there are two separate modes you can choose to work out in with Jillian, Fitness Training and Fitness Adventure. The Fitness Training itself consists of two options which are either preset exercise circuits which Jillian herself has handpicked for the player to work out with which are named various things such as Fat Burner plus a number of circuits that allow you to create your own workout routine from the 49 exercises that are included in the game.

Besides that choice there is also the option to choose just a single exercise to work out whatever part of the body you feel like choosing to. All of the exercise moves are provided here so you can either choose your favorite or most challenging move depending on what you feel like doing. The player can then pick what difficulty level they want to select between, however the higher difficulty only increases the amount of reps that need to be performed. 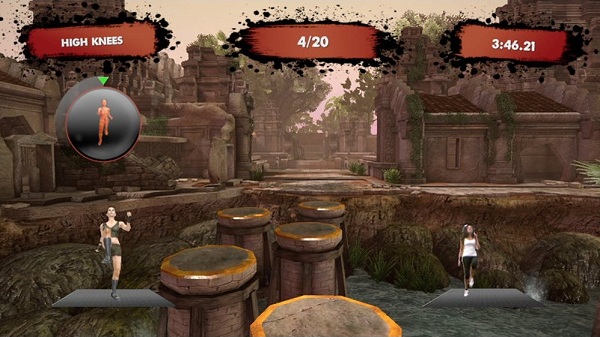 Besides this mode there is also the whole Adventure aspect to the Fitness Adventure and that is the Fitness Adventure mode. There are 58 levels of this mode that the player will be able to go through and can choose to do them at any time they wish to. The player is placed out in the wilderness, usually in a jungle ruin of some sort and must perform a number of different exercise movements to make it across obstacles while walking and collecting coins.

While the Fitness Adventure should be where this game shines, it is unfortunately one of the more annoying aspects of the title. The player is unable to move at any speed they choose to, in fact a slow walk by the player will be the same as a fast jog, though the game has difficulty picking up anything other than very high leg lifts so best get to high stepping to move further.

To make matters worse the player is forced to move along an on-rails path where they can extend their hands to either the left, right or above to collect green coins to reduce their time or if they grab the bad red coins they will gain time. The whole Fitness Adventure is portrayed in first person, however no control is given to the player, all you are allowed to do is move where they want to and if you feel like looking around at the jungle environment then you are out of luck.

As you make it through the adventure you will run into a number of obstacles which can only be avoided by performing a certain exercise motion to get past them. This is obviously where the exercise portion of the adventure comes in but also is where it can bring most people to a screeching halt due to very poor recognition from the Kinect. The only way to clear any obstacle is to do a certain number of reps for the shown exercise which usually at least make sense with the obstacle in your path. However that is ultimately all there is to the Fitness Adventure, walking in place and picking up easy to grab gems and performing exercise with the only difference between levels being the exercises and paths that are performed.

Now no matter which mode you choose to play, you are given three options to choose roughly how you want to start that exercise. You can either preview the exercise which will have Jillian’s in-game avatar (you never see a real video of Jillian ever in this title) perform the exercise while you watch, a warm up mode that is the same as the preview mode but allows the player to supposedly warm up to the exercise though unfortunately there is no way to tell if you are performing it the right way as the game chooses not to tell you, then of course starting the exercise itself. 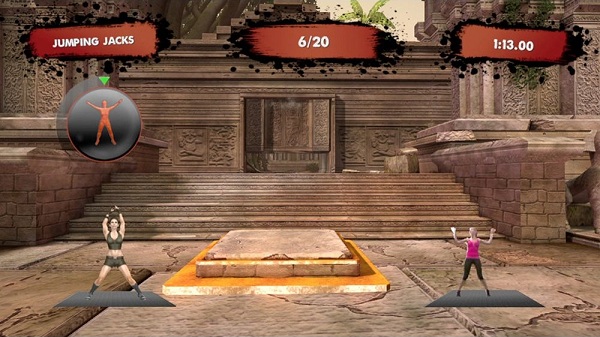 Now let me come out and say it here, Jillian Michaels’ Fitness Adventure will make you sweat and will give you a workout and a number of the exercises in this game are quite difficult to perform or at least taxing on the body. The title also requires much more room than an average Kinect title to work properly at all so it can pick up your various exercise motions, though it will often not even do that properly.

As you go through each exercise you will either perform them correctly or incorrectly, however there is absolutely no way to tell what you are doing wrong. The title does not inform you if a body part is out of place or anything else, simply all that is shown is a red outline and a verbal scolding from Jillian herself. There is no learning in this game and nothing is taught, you must either do them correct the first time or try to figure out what is going wrong yourself.

That is to say that the title itself isn’t what is going wrong however. The detection on the Kinect itself is just absolutely terrible, especially for floor exercises. While most exercise games have difficulty with floor exercises I have never experienced such inaccuracies as with Jillian Michaels Fitness Adventure. To make matters worse, the player must often readjust their Kinect simply so it will even register the player on the floor, but this usually turns into an issue when immediately after you are on the floor you have to perform some standing exercise which requires another fitness breaking Kinect adjustment.

Besides the floor exercises, the title does a poor job recognizing most standing exercises as well. I mentioned earlier that this title requires more room than your average Kinect title and that is due to most of the actions you will have to perform to make it through a routine. The detection however is so dodgy here that proper motions following Jillian’s example perfectly may not even be picked up or marked wrong, while performing something not even close may be seen as correct.

Overall:
In the end Jillian Michaels’ Fitness Adventure may provide a unique setting and a rather difficult workout for some, it also provides some of the most lackluster experiences you will find on the Kinect, exercise title or not. While Jillian Michaels fans may love this to death, her personality does not transfer well into a fitness video game. While some people may still enjoy exercising with the various flaws in the Kinect detection and just soldier through the workouts, the poor detection often makes Fitness Adventure and longer exercise circuits a frustrating and annoying chore with minimal reward.