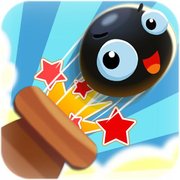 Jelly Cannon Reloaded, developed by Nickelodeon continues the quality of Chillingo Published games with fairly decent mechanics and good graphics for the platform, along with bang for buck. The concept of shooting Jelly out of a Cannon doesn’t really make sense to me, I thought a slingshot would make more sense, however the premise does make for an amusing experience. On a side-note, if you ever watched The Office, Jelly probably reminds you of that episode where Jim put Dwight’s stapler inside some Jelly. I think that’s another great idea for a game, pranks that involve using Jelly. 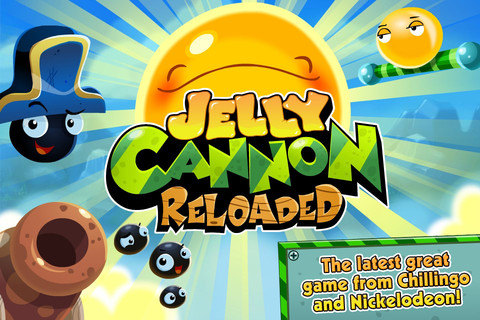 Jelly Cannon is a nice looking game for what it is, no doubt about that, it’s fairly similar to other Chillingo games I’ve reviewed but that’s not such a bad thing. Although the games character and influence is a little confusing, you wouldn’t know by looking at it that it’s a partnership between Nickelodeon and Chillingo and I suppose that takes away from the final product. The only thing that gave it away initially was the “more nick” option in the main menu, in saying that the animation is fantastic and so it should be, considering Nickelodeon is involved. Especially on the eyes/face of characters, where most of your attention tends to focus if you’re like me. Add to that the colourful, playful nature of the interface and vibrant textures, you’ve got one decent looking game that caters to it’s market (kids). The physics are really what make the game though, and they don’t disappoint in the way they convey the substance that is Jelly, unpredictably awesome and silly.

Sound design isn’t as impressive compared to the animated feats of Jelly, for the most part it’s fairly spot on with the theme of the game, however there are annoying traits here and there. For example the yawning of the Jelly when stationary, Jelly yawns!? Also the sound effect on the shooting of the cannon is pretty bland, but credit for the suspenseful music on more difficult levels even though it hardly changes. It’s not a total feast for the eyes and ears, you’re attention is more focused on the Jelly, which they’ve done right and that’s the most important part. 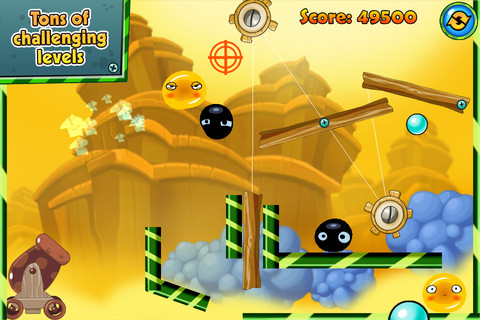 Most people have played physics slingers by now on a mobile platform (hello angry birds), so what sets Jelly Cannon Reloaded apart? Well for a start you have to make all the jelly blobs touch each to clear the levels, sounds sort of silly and creepy doesn’t it? Well it’s charming to watch all the jelly form to a larger piece, while none can be lost or it’s game over. You basically start with a cannon on the left and aim to shoot, the goal is to figure out the best way to get around all obstacles and effectively make all the Jelly fall on each other. Depending on how far from the cannon you touch the strength of the blast is determined, it’s pretty basic and similar to something like Ragdoll Blaster if you’ve played it.

Level design has good balance between power shots and the more precise lobs, but there are some rather annoying levels, like the final level in the first chapter. There’s basically a series of platforms that need to be tipped over, one after the other, so they all level out, but before you have to fire a cannon shot through the gap to tip a sunshine globule into play. It was really quite frustrating, stepping over the line to challenging and down right annoying. But here’s the kicker, there’s a way out of the more difficult levels and it’s quite a clever monetization ploy. It works in the form of a device that magically draws everything together in the level, each use of it costs $0.99, pretty evil when think about all the kids playing the game. For all the adults though, it can be quite fun or frustrating to get three stars on all levels, you’ll have to attempt more than twice atleast.

75 levels and probably more to come, it’s really quite a fun little game, despite the shortcomings of some frustrating level design. 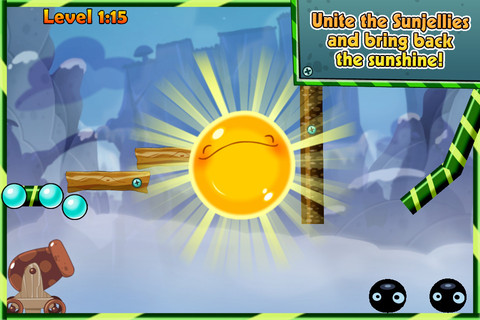