Overview
Incoboto is a one man video gaming project by Dane Carter, one of the co-founders of Big Blue Box Studios which created Fable for Xbox. Incoboto is described as an adventure-puzzler in the spirit of Portal and Ico. Does Incoboto stack up against the name dropping?

Story
Incoboto is incredibly depressing. A company named The Corporation causes all the suns to die out, killing almost everyone. A small boy named Inco seems to be the only one left. So he sets off with his friend Helios, a sun with speech difficulties, to go on the adventure of a lifetime to bring light to the skies once again. The story is told through narration and supported by notes left behind by the dead and creepy signs left by The Corporation. Themes of death and loneliness are pervasive. This is emotionally heavy stuff. 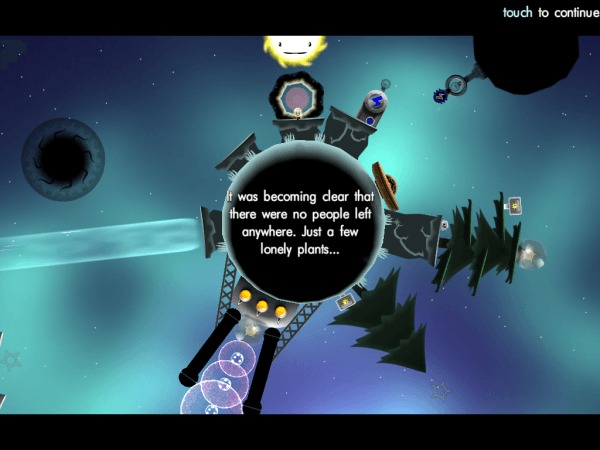 Even with the sun, Helios, as your constant traveling partner, Inco’s small size, and the sterile and vast landscape make it really easy to feel utterly alone. The Corporation’s signs are well written and incredibly funny in a dark Aperture Science like manner. This helps lighten up the mood of an otherwise depressing tale. Although rebirth is also an important theme in Incoboto, it is hard to not feel a little emotionally dragged down by the game. An engrossing and touching story like Incoboto does not come often on the iOS format and is a refreshing change.

Visuals
Incoboto is a gorgeous looking game. The visuals are sharp and well made. The visual style takes cues from Limbo, World of Goo, and Super Mario Galaxy. The camera is attached to the center of the planet Inco walks and pans from side to side as he moves. It is smooth and works well. There is a surprising amount of color in the game that is a sharp contrast to the heavy use of blacks. 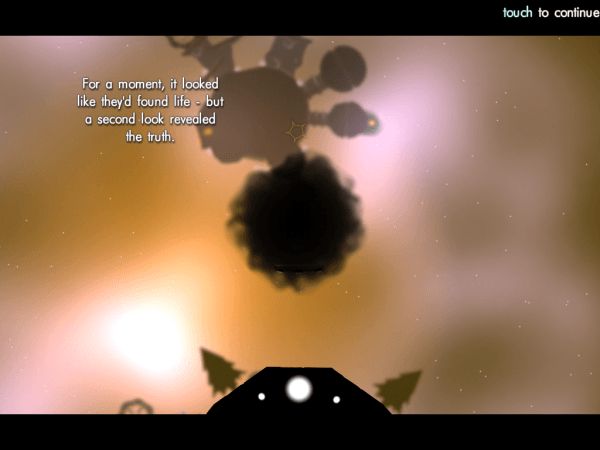 The splashes of color helps bring a little cheer and hope in a depressing and lonely experience. It helps fuel the themes of rebirth in Incoboto, keeping the game from being so sad and bleak you need to put down the game. Inco’s character model is extremely small and may be a challenge for those who are hard of sight.

Audio
The audio experience in Incoboto is an absolute joy. The background music is subtle yet moody. The game would not be nearly as depressing and lonely feeling without the soundtrack. The game’s soundtrack is available on Band Camp for 2 British Pounds and is absolutely worth a separate purchase.  The games audio leans heavily on the synthesizer which fits perfectly with the sci-fi theme of Incoboto.

The sound effects are perky and cheery in sharp contrast of the music. The sound effects of using puzzle mechanics and traveling from planet to plant made me feel like I was doing something to bring light and life back to the universe. Definitely plug in some headphones when you play Incoboto or risk losing a huge part of the experience.

Gameplay
Incoboto can be utterly fiendish at times. The puzzles are well thought out and range from simple to mind bending. Some require thinking out of the box; others are a matter of timing or agility. Prepare to be stuck at certain points. However, figuring out a puzzle that has stumped you for the last three hours is an incredibly rewarding experience. Puzzle mechanics take a few cues from Portal but adds enough twists to not feel like a mobile 2d version of the game. If you can persevere through some frustrating moments from being stuck by some fiendish puzzles, you are in for an amazing puzzle gaming experience. 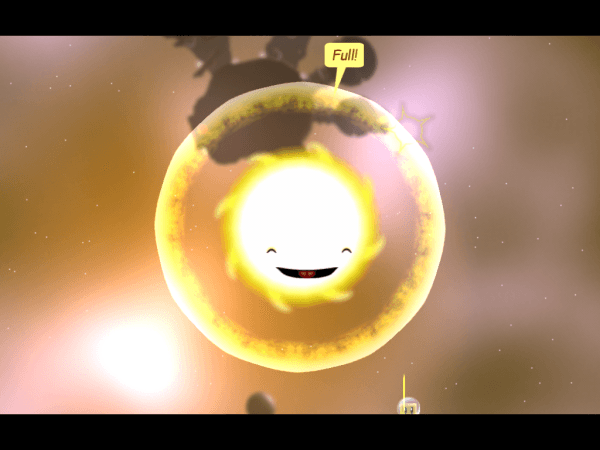 One mild annoyance with Incoboto I feel worth mentioning is the ever present tweet this button in The Corporation signs. Although The Corporation slogans are well written and extremely funny, the button feels utterly unnecessary and I personally found it to detract from the feel of the game. It is not really that intrusive but I would be happier if it was not there.

Incoboto has two control schemes, one utilizing the whole screen and the other feeling more like a controller. Most will want to use the default control setting as I found the controller type setting to be rather clumsy and inaccurate. There are several puzzles requiring accuracy and speed which makes the controller setting unusable at times. The default setting on the other hand is nearly perfect. It is responsive and incredibly accurate. However there is one thing I do not like about it. 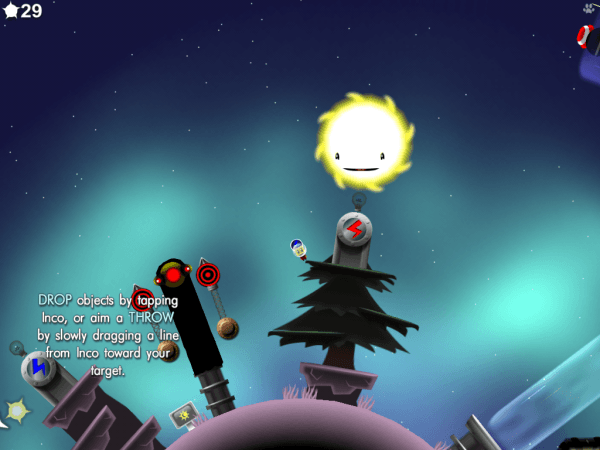 Because it requires the use of the whole screens, sometimes I found my hand covering up a portion of the screen. It is not a huge deal, but it feels like a shame to be covering up a game as good looking as Incoboto. There is one minor control annoyance that may plague gamers with larger fingers. Because many things are extremely small in the game, clicking on the small items or buttons can be difficult at times. Even with my small fingers, I found myself accidently clicking the wrong object at times. Overall, Incoboto makes great use of the iPads generous touch screen space.

Overall
Incoboto is a fantastic game that has earned its place in my must play list. I don’t think I have felt this emotionally moved by a game since the ending of Lunar: Silver Star Story. The audio, graphics, and storytelling come together perfectly to give depth to a surprisingly challenging adventure-puzzle game.  The incredible part about this is the fact one man did this all. Incoboto is worth the 2.99 price tag and is a must have for every single iPad game library.