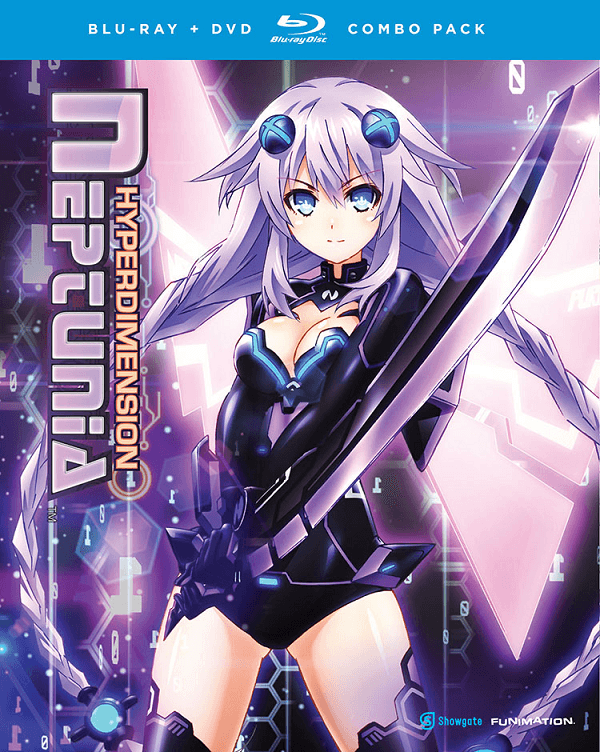 Overview
The Hyperdimension Neptunia video game franchise has been expanding into various genres over the last few years and the rush of games with the cast isn’t slowing down, with there already being three titles released in North America this year and three more being developed for release in Japan. As such it didn’t come as too much of a surprise back in 2013 when Hyperdimension Neptunia: The Animation debuted and now that the anime has been released in North America, how does this video gaming parody series translate into an anime?

Story
It is worth noting that for the most part, unless you have at least played one entry in the Hyperdimension Neptunia series, you will be fairly lost right off the bat as the anime only explains a little bit about the way the world of Gamindustri works. This is likely due to the fact that the series attempts to cram the three original games into one twelve episode season while tossing in some original elements to help spice things up for fans. 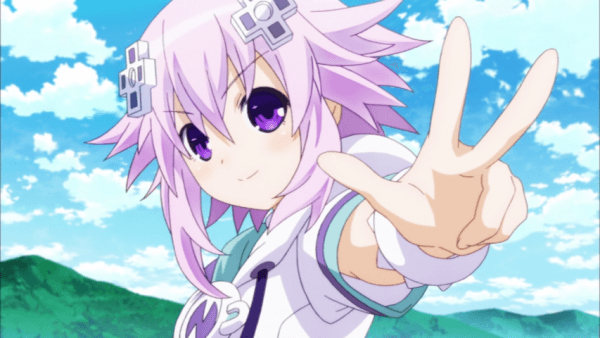 Anyways, Hyperdimension Neptunia: The Animation begins with the four CPU Goddesses, Purple Heart, Black Heart, White Heart, and Green Heart signing a friendship pact in order to put an end to the long violence between their nations of Planeptune, Lastation, Lowee, and Leanbox respectively as they have always previously fought one another in order to take Shares, the source of energy for a Goddess as it determines the populace’s belief in their CPUs, from one another.

Shortly after the four nation celebration, the CPUs revert to their human forms of Neptune, Noire, Blanc, and Vert before beginning to part ways as “friends.” Weeks pass and Neptune continues to laze around her Basilicom, she and her little sister Nepgear (a CPU Candidate), begin to visit the other nations in order to turn Neptune’s personality around but as the group grows larger and visits each nation, it becomes apparent that there are dark forces at work. To complicate things further, a stranger from another dimension appears and a force from the past begins to cause trouble for the newly bonded together CPUs. 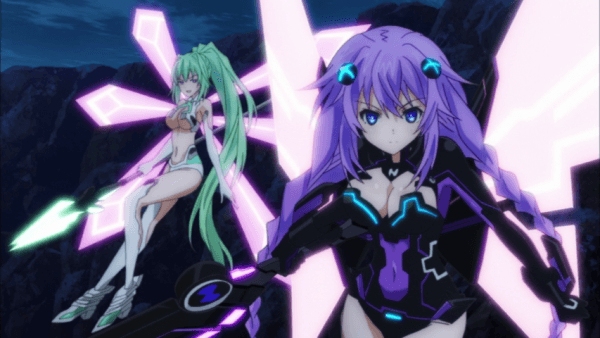 In case you missed the name references, the four girls and their respective nations represent the console industry, with Noire standing for PlayStation, Lowee for Wii, Leanbox for Xbox, and Neptune for if Sega had still managed to stick around in the industry. Hyperdimension Neptunia debuted back in 2010 and with the anime airing in 2013, the series blitzes past the story from the first game that underwent heavy re-writes when an enhanced version was released, and mostly focuses on the events from Mk2 and Victory.

This means that unless you’ve spent time with the series in the past, there will likely be some disconnect here and there as the series’ execution is primarily focused on the fluffy aspects of the character interactions with occasional issues rising up here and there. The common enemy throughout the early half of the series, Arfoire, regularly rears her head in order to take down the CPUs but the only time she really serves as any type of threat is quickly turned into a development device for Nepgear and her fellow CPU Candidates, Noire’s little sister Uni and Blanc’s twin little sister’s Ram and Rom, to transform into their CPU forms and break past their fears. 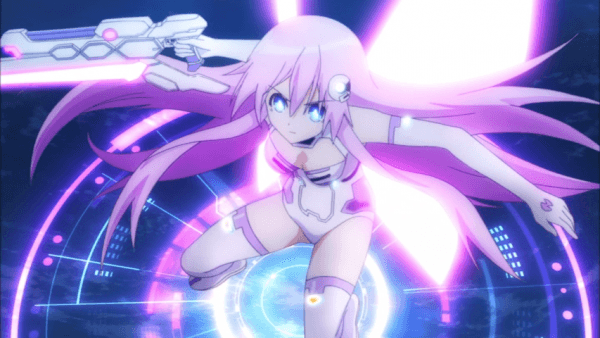 Various enemies quickly rise and fall throughout the course of the series, most given barely any screen time compared to the rolls they played in the original games and even the anime’s heaviest attempt at drama with a certain young girl fails to pack any real emotional punch due to the way it is handled. Thankfully the series’ humor managed to make the transition into the anime in all of its forms.

As mentioned earlier, the Neptunia series is known for being a parody of many elements of the gaming industry and the massive amount of jokes taking shots at games remains just as true in the anime as it was in the games. Characters will freely make references to well-known games and often quote lines from them as well. If you happen to be a gamer then this will leave you laughing quite often as there are plenty of jokes and gags here to keep you going, especially in regards to the R18 Island and the way mysterious beams of light are lampooned or Arfoire resorting to buying a eggplant farm to try and exploit a newfound weakness in Neptune. 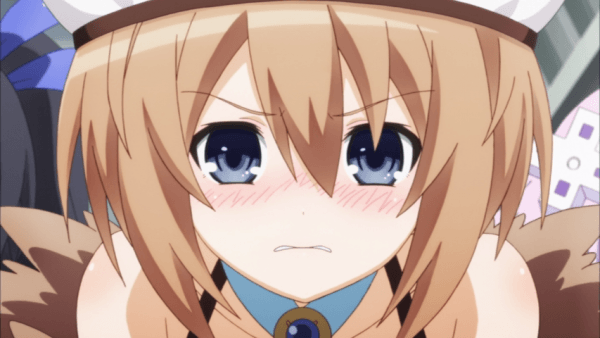 It always helps that the characters themselves remain as fluffy and lovable as ever with their personalities from the games translating quite well into the animated format. Although this may take away from the action scenes and does damage the drama element at times, some of the best moments come from the girls taking jabs at one another or messing around in some form. This means that while the series doesn’t really go to any deep or meaningful place, it still remains as fun as ever for fans while newcomers will likely feel quite lost due to the anime adaptation haphazardly plucking major events from Mk2 and Victory with very little explanation.

Visuals
The animation studio, David Productions, has done a great job bringing the cast into the new anime format which is a significant plus. The character designs are exactly as fans will remember and are fairly unique looking for those who aren’t familiar with the series. Whenever the girls transform into their CPU forms the transformation sequence is handled far better than the games have shown in the past, with many of the girls undergoing various physical changes due to their goddess forms being more adult versions of themselves, with the CPU Candidates and Vert being the exceptions. 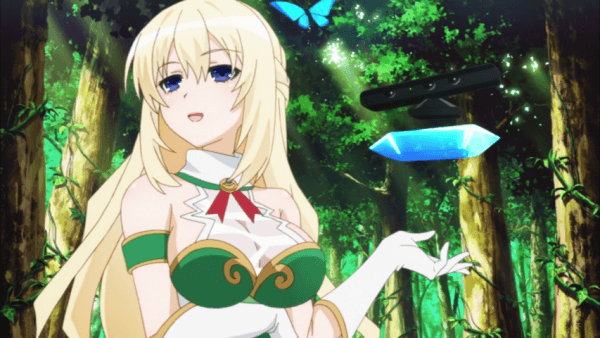 It is worth noting that there is a decent level of fan-service present in the series as the girls’ CPU forms all happen to be skin tight suits but it rarely goes above in that regard outside of a few jokes poking fun at how large Vert’s chest is or the tininess of Blanc’s. The various action sequences are nicely stylized with all of the characters making use of their signature attacks quite often in combat though I must say that despite the amount of effort put into a lot of these fights, there rarely is any feeling of danger due to the lighthearted nature of the series.

Audio
When it comes to putting together an English dub for a property that already features an English voice cast in other formats it usually is a toss-up on whether or not the publisher will try to bring in the original cast and thankfully FUNimation has managed to gather almost all of the original cast to reprise their roles in the English dub for the series while, of course, the Japanese track retains all of the same voice actors from the games. As mentioned before, the series is packed with plenty of gaming references in the dialogue and the cast really helps deliver on these jokes and many more. 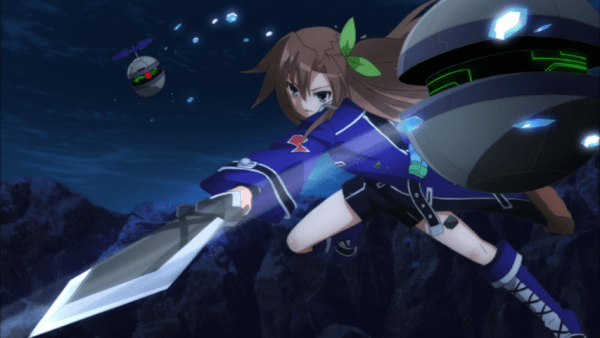 The standard background music throughout the series is fairly standard, with a few tracks sounding like they were pulled from the games, though I must say that there are a couple of vocal insert songs that were directly taken from either the opening themes or cutscenes in the games and these songs work wonders for the series, especially for fans who will appreciate the use of familiar music. The opening theme “Dimension Tripper!!!” is sung by Nao, the singer for most of the series’ music and is very fitting while there are a handful of different ending themes with “Love & Peace” by Ayane standing out the most, though the primary ending theme is “Neptune Sagashite” by Afilia Saga and, while catchy, pales compared to the temporary ending theme.

Extras
The bonus features contained on Hyperdimension Neptunia: The Animation’s discs are fairly standard with there being a clean version of the opening theme as well as all of the ending sequences. This is followed by promotional videos for the series, a three minute long compilation featuring all of the transformation sequences, and trailers for other FUNimation series. 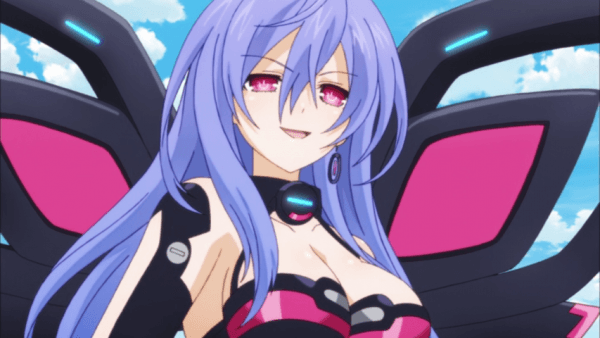 It is also worth noting that the series’ OVA is also included in this release though it is mostly treated as the thirteenth episode. The OVA explores the bad ending that players could potentially achieve in the game and Neptune and Vert’s efforts to reverse the changes that have occurred in the world by traveling to another dimension.

Overall
Hyperdimension Neptunia: The Animation manages to successfully re-produce the charming characters and oft hilarious dialogue that the series is known for but unfortunately attempts to cram too much into such a short time frame that any dramatic moments attempted end up falling flat as a result of poor build up and execution. This results in an enjoyable and fluffy show that fans of the series will likely enjoy despite its issues as a number of extra character interactions are included here while newcomers will probably want to turn to the Re;Birth releases for the real thing.