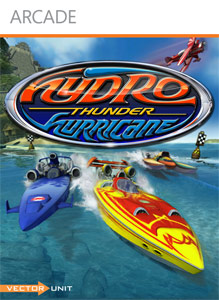 Story
“Hydro Thunder Hurricane™ is the all new, full-featured sequel to the legendary arcade racer. Featuring rocket-powered speedboats blasting across amazing dynamic water, gorgeous visuals, and interactive environments packed with shortcuts and surprises, this is the adrenaline-drenched sequel fans have been waiting for. Pit your rocket powered speedboat against 15 opponents in single-player races and championships. Hone your speedboat skills in the new Ring Master and Gauntlet modes. Dive into intense multiplayer races with up to eight players over Xbox LIVE, up to four players locally, or even mix local and online games!”

Hydro Thunder Hurricane doesn’t have much of a story. You race through the levels that aren’t connected, and you unlock a bunch of boats based on the points you collect. Hydro Thunder Hurricane is a time trial game at its heart. The leaderboards and attempting to get the best time is what this game is all about.

Gameplay
Initially Hydro Thunder Hurricane may seem like a standard arcade racing game, but it really isn’t just that. There are multiple modes, multiple unlockables, leaderboards, and an online mode. This game has a lot to offer, it just may not have what everyone wants.

Hydro Thunder Hurricane is still a racing game. The thing about this game though, is that you aren’t really racing the AI. Instead of racing the AI you race the clock. The AI don’t even all start at the same spot as you, a lot of them start way ahead of you within the race. While you technically are racing the people, you just need to beat the time that each person is going to make when they cross the finish line.

There are multiple modes in the game. The modes include: Race, Ring challenges, Gauntlets and Championships. Races are just straight up races to come in first place. Ring Challenges require you to drive through the rings and get the best time on the track possible. Gauntlets require you to go through the level without hitting any of the explosives (this is my favorite game mode). Finally, championships require you to do a series of races one after the other and get good positions in order to move on.

Throughout the game you can unlock more boats, tracks, and skins for the boats. The boats and tracks are unlocked by getting credits which gain by coming in first, second, or third. The better you place and the harder the mode the more credits you earn. Extra skins for the boats are unlocked by doing certain tasks, such as finding all the hidden packages on a level or completing a certain stage in first place.

The game also features multiplayer, where you race against people online. The nice bit about the multiplayer in this game is that it allows up to 4 players to split screen and go online against other players around the world. You don’t see this kind of support very often, and it is a nice touch for people with children or brothers.

Audio & Graphics
The audio is pretty bad. The theme song is repetitive, the announcer is annoying, and the sound effects sound oddly familiar from a really old game. I don’t know if the audio was the last thing on the developers list of things to update or what happened with it. There isn’t really anything good to say about the audio, because it flat out isn’t that good.

The Graphics are nice for a revived classic. The developers seem to have attempted to keep the graphics as true as possible to the original. The levels are pretty cool in design, and there are many routes through each level. As you speed up the world around you blurs and while this is nice to simulate speed, it impairs your vision and makes driving the boat pretty hard.

There are also 2 Avatar Awards. Check the video below for what they look like.

Overview
Hydro Thunder Hurricane brings back everything that was loved about the originals, while adding new levels, modes, and other extras. The game at heart is more of a time trial based game, where you are racing against the clock rather than the other racers. There are other racers in Race mode, but they just get in the way. The game is all about finding the quickest route through the level and getting the best time on the leaderboards. There are things within the game that people will enjoy without the use of the leaderboards, but you will enjoy Hydro Thunder Hurricane a lot more if you are the type that likes to compete for the best time. While many people will enjoy the game at first, the leaderboards are what will keep people coming back.
I give Hydro Thunder Hurricane