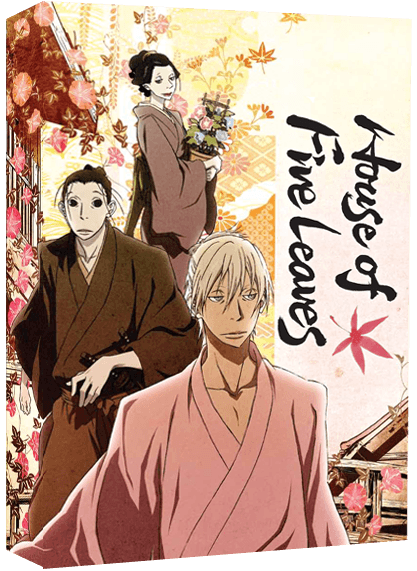 Overview:
We’ve all seen stories about samurai in the past. They’ve either been completely peerless in battle, or valiant warriors fighting for a noble cause, or men who respect honor above all else or even those with super human skills that make them impossible to defeat. However we rarely see an anime focus on a samurai that is just down on his luck and not as noble as one would believe. However NIS America has brought a series over to North America that features such a samurai… and that anime is House of Five Leaves. How does this new look at the story of a samurai turn out?

Story:
In the Edo period of Japan, law was enforced by the edge of a blade. Samurai were everywhere and obeyed their lords and performed various jobs and provide protection to whoever hires them. However there are also those who are simply Ronin samurai, those without a master.  House of Five Leaves follows the Ronin samurai Akitsu Masanosuke, whom while being a skilled swordsman, simply can’t hold onto a job. 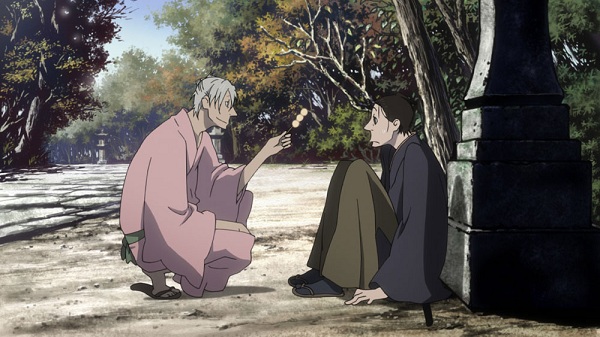 The reason for this is due to his shy personality and inability to stand up to crowds of any kind. However one day his luck changes when he is helped out by a mysterious man named Yaichi. Yaichi offers Akitsu a job as his bodyguard during a simple late night meeting. However this meeting isn’t your standard meet and greet. No, it is in fact to pick up a ransom that is being delivered to Yaichi from a rich family because Yaichi and his partners, Matsukichi, Umezou and Otake have kidnapped their son.

Rather than helping enforce the law, it turns out that Akitsu has joined up with the wrong side of the law and is protecting a gang known as the Five Leaves. This gang makes a living out of committing illegal acts and skirting around the law. After discovering their true purpose Akitsu says that he will never help the Five Leaves again despite Yaichi’s request that he stay. However despite his attempts to avoid the group and their illicit activities, the Five Leaves slowly begin to bring Akitsu into their fold as he begins to develop friendships within the group. What will happen to Akitsu now that he has been associated with the Five Leaves gang? 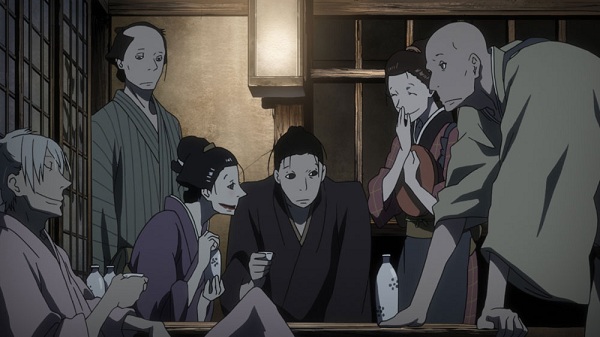 It can be seen that the show is a bit slow and this is in fact true. Rather than focus on action, most of what viewers are presented with is calm scenes as the characters talk with one another and organize their plans. This can make for a bit of a slow story; however there is still plenty of drama that will keep viewers interested as they make their way through each episode and see how Akitsu slowly becomes a member of the group and even overcomes some of his shyness along the way.

Visuals:
House of Five Leaves features a different type of character design that most people are used to and this can unfortunately cause a lot of people to pass up the title. It is difficult to describe what is unsettling about the way the characters’ faces are drawn, though perhaps their eyes would be a great start, but whether or not you embrace the character design will be a driving force for how well you appreciate the artwork of the entire show. While it may be difficult at first to adapt to this unusual character design, they seemed to grow on me as episodes passed. 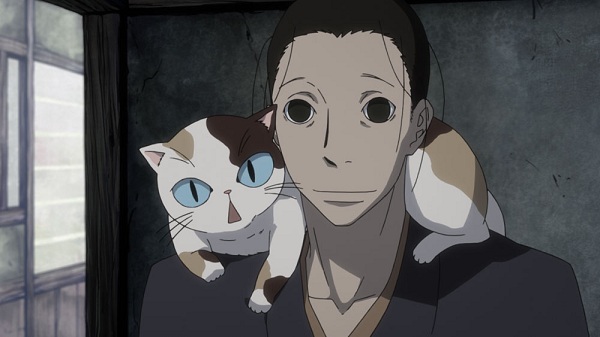 The amount of detail that can be found in the animation is quite impressive, as it helps bring the entire scene together with very simple inclusions that create a detailed presentation. Though with all this detail the series does use a very subdued color palette that tends to be a bit bland at time, keeping things as basic as possible, this includes the opening and ending animations which are basic in design and presentation.

Audio & Subtitles:
It is worth noting that NIS America has released the House of Five Leaves series with subtitles only, which means that viewers will only be able to listen to the original Japanese dub while reading what is going on via the English subtitles. These subtitles are accurate and help portray what is going on at any given time without being obtrusive to the show itself. 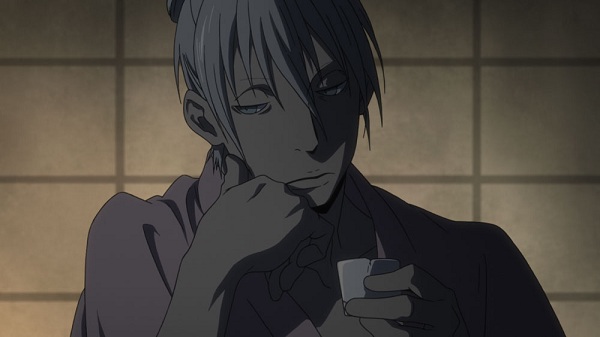 The Japanese voice cast itself does a well enough job portraying the characters and their, at times, dreary personalities. The anime’s background music is suitable enough, though what stands out drastically from the series is the opening song. “Sign of Love” by immi would best be categorized in the electronica genre and is very upbeat and provides a nice and enjoyable introduction to each episode. On the other hand the series’ ending song, “all I need is…” by Rake features a lot of English lyrics which aren’t handled well by the singer, making it something that viewers will gladly skip through. 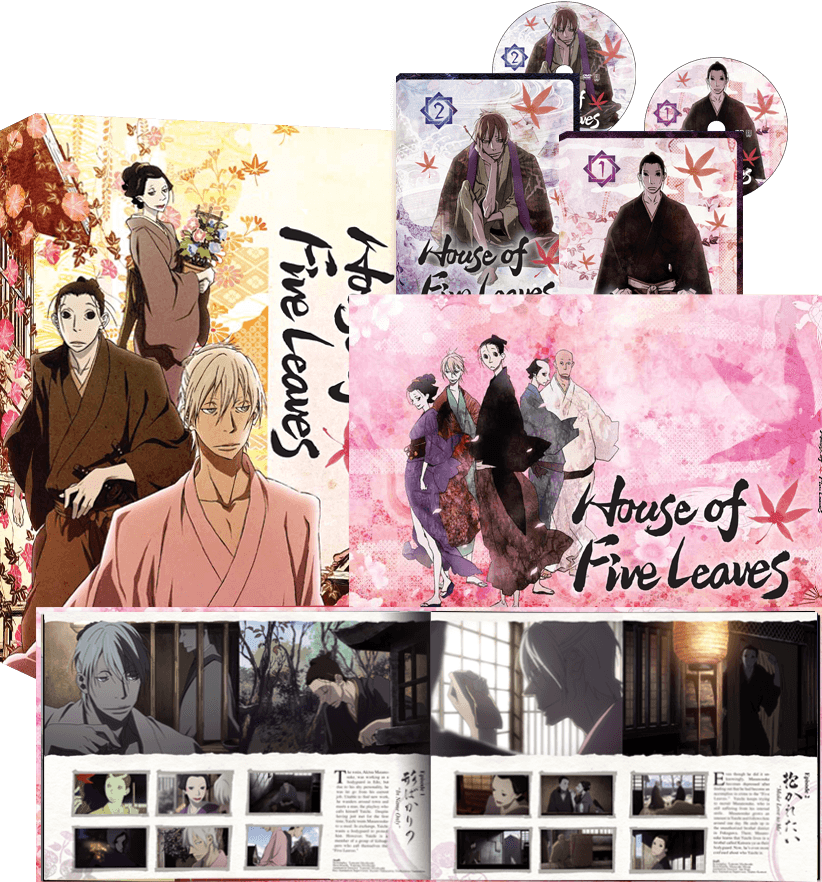 On the DVD discs for House of Five Leaves we see your standard bonus features such as trailers for other NIS America releases and a clean version of the opening and ending though, as said before, these feature basic animation and the clean versions don’t offer anything besides a quick way to listen to the songs if you enjoy them.

However, as standard with an NIS America release, House of Five Leaves has received the Premium Edition treatment. As such it comes with a collectible chipboard slip-case and a hardcover art book with fully colored artwork inside. Now while other collectible slip covers from NIS America usually feature a glossy finish or smooth material on the outside, House of Five Leaves is given a textured cover with no gloss. The textured slip-case provides a bit of a classic feel to the package, though I found the cover texture to be less enjoyable when compared to other releases from NIS America that feature a smooth cover.

Now the artbook itself contains a number of features, including character introductions for all of the main characters, summaries for each episode accompanied by multiple images from said episode and a few pieces of scenery artwork. Something new to NIS America’s art book is a set of early storyboards and sketches from various episodes that give us a small glimpse at how an anime scene looks before it is animated and is still in the planning stage.

Overall:
House of Five Leaves is something that isn’t seen often in anime nowadays. While most anime is tailored towards those who enjoy plenty of flashy action, colorful designs and moe characters, House of Five Leaves steps beyond that boundary and delivers a serious experience with plenty of drama and well developed characters.  Those who can look past the strange and unfamiliar art style will find a unique anime experience.