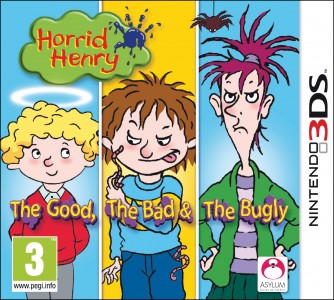 Overview:
I’ve never fully understood why Horrid Henry’s supposed to be cool to youngsters; he’s loud, rude to his parents, throws tantrums and chooses to listen to heavy metal full of guitar solos at his tender young age. In fact, I think I prefer ‘Perfect Peter’, his younger brother who he labels ‘the worm’. Then again, I’m too old to get the appeal. This game follows the art direction and personalities for the world of Horrid Henry created by Novel Entertainment when they made their CiTV animated series, rather than that of the books. With Asylum Entertainment developing, Horrid Henry: The Good, The Bad & The Bugly manages to capture the spirit of the CiTV series, with the same voicing, likenesses and those same guitar riffs that infuriate everyone but the kid who chose Horrid Henry. Oh yeah, and don’t ask me what ‘Bugly’ is. Even after completing the game I’m none the wiser – it must just be short for ‘Bloody Ugly’, Henry’s perception of ‘Moody Marget’ (though she doesn’t actually appear in the game, just the box art). 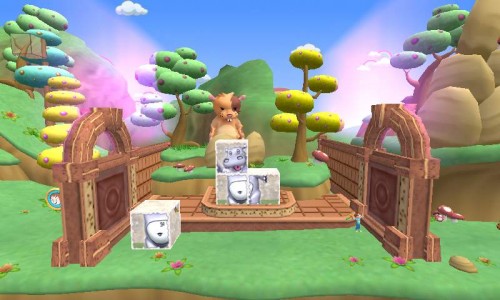 It’s a little bit thin on the story, with spoken-over static images acting as cut scenes. Theses ‘cut scenes’ aren’t even in 3D and are slow-paced where the talking and sound effects come to a standstill while the next image is put up on the screen. Not that it matters but there aren’t really ongoing links to finding the bunny; he simply turns up after you’ve went through the 11 levels leading up to the final boss showdown.

Gameplay:
The three worlds are each split into 4 levels, making for a rather short overall experience at 12 levels. The first two worlds have pitiable boss fights at the end of the last levels. While you can tell they have been geared towards youngsters well in that their health gauge doesn’t heal between your deaths, meaning anyone can take them down through a process of attrition, their make-up is just a stodgy as the rest of the enemies. It seems very buggy when blasting them with the goo shooter, to the point where it’s preferred just to jump over most enemies and carry on as normal to save yourself the hassle. That said, the final boss is more substantial, with more challenging, tactical battle that has you using the four different abilities acquired for your goo shooter, though for much younger players is could be a bit too confusing and they could instead prefer the simpler stuff. 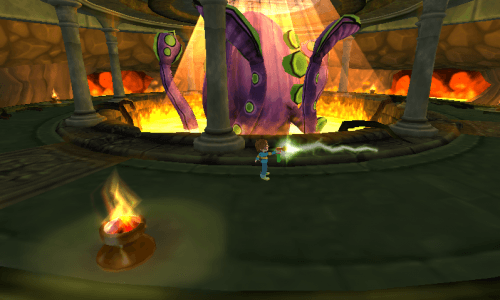 Although you do notice the levels get progressively harder, the levels are very samey. The framework remains the same throughout despite slightly modified backgrounds each time around, such as puzzles which use the touch-screen and feature a large hamster-type thing throwing puzzle pieces at you for you to organise. Of course this overgrown marmot probably means more to Horrid Henry fans, but to an outsider seems random. Nevertheless, whether you know who the hamster is or not, these puzzles get repetitive and have quite a few problems of their own where they’re fiddly to control on the touch screen and can easily to manipulated in a way that wasn’t intended (I.e. breaking through invisible walls to get jerky pieces of juxtaposed scenery).

One of the reasons levels get harder is a lack of control. The physics are floaty and Henry jumps very high, but you feel they are subject to strict programming. Changing direction in mid-air just isn’t possible and you never really have the feeling of total control over Henry’s movements. You can also get snagged where pieces of scenery are jagged and unfinished (in some instances even registering damage to your health, despite not doing anything wrong), and there was even one time where the checkpoint registered with me dangling in mid-air, so every time I respawned there and then I fell to the area below, therefore having to climb up again just to get to where I was. 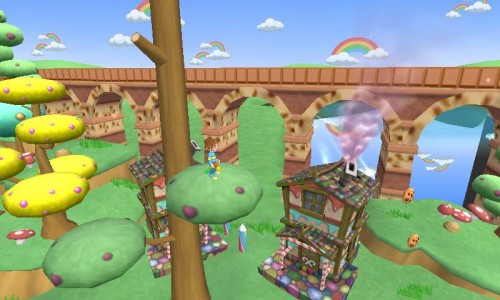 Visuals & Audio:
As I said, the cut scenes – if you can call them that – aren’t up to much, with some short lines voiced by the people from the cartoon played over some still images. During the gameplay though, the visuals are pretty colourful and, accompanied by the music, create the illusion of these distant worlds. The textures are a little grainy, a problem that tends to affect more that just the aesthetics, and the model of Horrid Henry himself is so small and blurry you don’t actually see that much of him despite the license. The 3D isn’t put to as bad use as expected, with depth evident during the levels and the final boss battle being rendered in 3D fairly well. Although it’s more a criticism of the 3DS than the game itself as many games have this problem, the effect quickly becomes sickening and it feels better with it off.

Overall:
Although it’s from a small team who were more than likely a little rushed to get it out in time for Christmas, Horrid Henry: The Good, The Bad & The Bugly isn’t a great experience. The fact that it’s a platformer makes it a lot more playable than it would be given the same attention to development in any other genre, but its problems are in clear view for all to see. A number of minor glitches are sure to crop up for anyone who plays it, but the important thing is that, although regular, these issues are all small. The low level count means it ends after only several hours of play, the stat-based completion percentages offer little incentive to replay levels, and even though overall it may be sufficient for Horrid Henry fans, the gameplay is unlikely to win it any new followers.