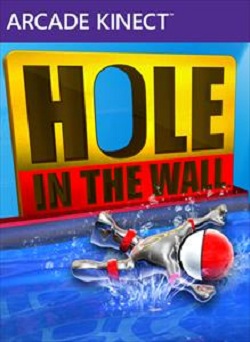 Overview:
With the release of Fruit Ninja Kinect, Microsoft launched their first ever Arcade title that would make exclusive use of the Kinect peripheral. Microsoft has since released yet another Kinect only title, Hole in the Wall. The game is based off of the TV Game Show for children which airs on Cartoon Network in North America, which itself is based off of a game show from Japan named Nōkabe. Hole in the Wall could be a fun game for the whole family, but by using the Kinect only, how does it perform?

Graphics:
The game makes use of the player’s avatar which means that however your avatar’s face and clothing look, they will be represented in the game as your player. However your clothing will be covered in a silver metallic jumpsuit similar to that of the show, and your shadowy silhouette will be displayed to show how close you are to fitting the hole or if you are nowhere near it. 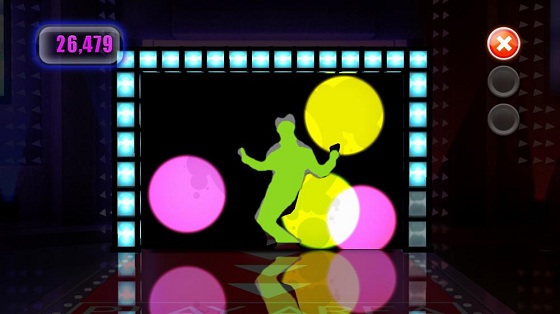 The set is a relatively good impersonation of the Cartoon Network version of the show’s set, and there is a pool of water which the wall will knock the player’s avatar in to as they make a mildly amusing pose. I wish there was more to mention but unfortunately there really isn’t. The set barely changes and that is all there is to it. The user interface is also very unfriendly and bland, the menu is boring to look at and is also unresponsive at times, feeling laggy whenever you try to select anything or switch between the two screens.

Audio:
Well, again there isn’t a lot to be said for the game’s sound. Players will be treated to a very limited voice over which will explain the rules, and when they fail they will be treated to a sound clip of people laughing in the audience. There is a little bit of music to be heard in the game, but most of it is relatively generic except for a few small pieces which may catch your attention for a brief moment.

Gameplay:
The central core of Hole in the Wall is making yourself fit through a hole… in a moving wall… Well it doesn’t get simpler than that right? Well unfortunately it is simple, way too simple. There are two gameplay modes that can be played, a survival mode which will place you up against an unlimited amount of walls that give you points for scoring and add up until you fail, then posting your final score to the leaderboards. The other mode of gameplay is the different shows which will put you up against five stages with the final stage having a twist. 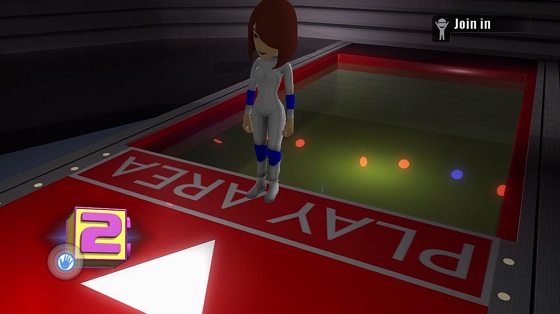 Players are meant to make their body into a shape that is similar to the hole in the wall, which can be anything from a boy about to swing a bat, to a frog on the ground. The player will get into position and the shadow outline will show how well they are fitting into the hole by either being green for perfect, to yellow for slightly inside, and red for failing with various colors in-between. The better you are fit into the hole, the faster the lights around the wall fill up, when you fill the lights up you finish the wall, fail and you get a strike against you, with three strikes causing failure and game over.

Now Hole in the Wall also has a mode which allows you to play with two people and this is very enjoyable, as it is always great to bring a buddy in and make various hilarious poses as you attempt to pass each wall, unfortunately this is only a small addition to what ultimately becomes a boring and occasionally broken experience. The only highlight is playing a final stage which will mix things up by making the wall harder to see, or mirror your movements or something similar, which can help break up the mundane activity that Hole in the Wall quickly becomes.

There is absolutely zero progression in Hole in the Wall. The best that you can do is unlocking new shows which change the themes of the walls. That is unfortunately it, there are no little additions to be achieved or anything to work towards besides the leaderboards which, let’s face it, provide little motivation to continue. The lack of enjoyability can make Hole in the Wall a faulty party game, simply because not only will it barely keep peoples’ attention for more than ten minutes, but a busy room is not the place to play this title. 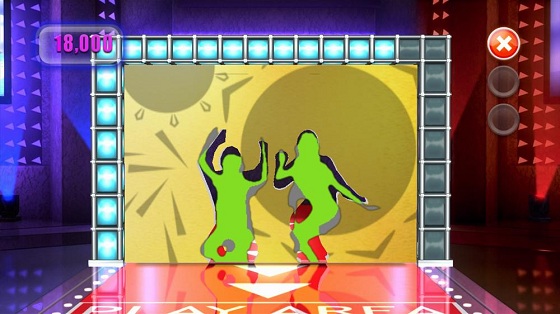 The Kinect can be a very sensitive system, picking up most objects in the room and displaying it when it wants to, however nearly all of the games make the Kinect focus perfectly on the motions of the player(s) and help eliminate the background movements of small inconsequential actions such as someone walking past in the background or, god forbid a cat.

Hole in the Wall has a tendency to pick up every little thing moving in the room, which immediately will cause you to fail every single wall that you come against. My cat jumped on the desk which was easily three feet behind where I was standing, but Hole in the Wall and the Kinect picked up the animal sitting there, barely moving, the entire time and because it apparently though this completely separate silhouette was part of my body, I failed even the simplest of walls I fit inside of. One point I literally could not understand why I was failing walls non-stop, until I took a closer look and realized that the game was picking up on the ceiling fan’s blades spinning barely at the top of the wall. If you live alone or shut yourself off from anyone else while you play, then Hole in the Wall may work flawlessly for you.

That is of course until it completely forgets who is playing at the time. Hole in the Wall has a mildly infuriating tendency to forget who exactly is playing at the time, which means it will either sign you off or take you off of Xbox Live. This is when no one was in the room and it simply forgot who I was, which caused the subsequent survival mode playthrough to be absolutely useless as the scores couldn’t be posted because apparently I wasn’t on my own profile anymore. 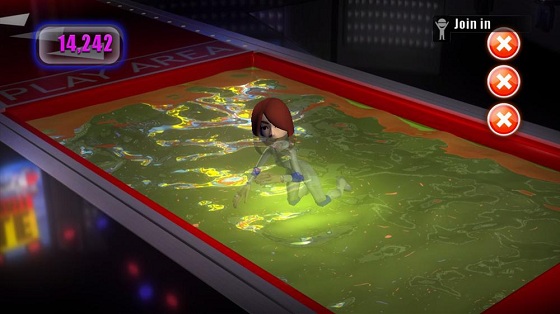 Overall:
Hole in the Wall had a decent amount of promise. The game itself is simple and could have been a great game for parties where people can sit, laugh and have a good time watching people make poses and compete with one another. The game is indeed fun when you are playing with a friend but it just doesn’t have any lasting appeal. The user interface is just plain bad, the game itself is poorly presented and the accuracy of the Kinect is something that would make Kinect defenders blush in embarrassment. It doesn’t help that the game’s 800 MSP price tag makes it a mildly expensive, inaccurate and only slightly enjoyable title.

I give Hole in the Wall