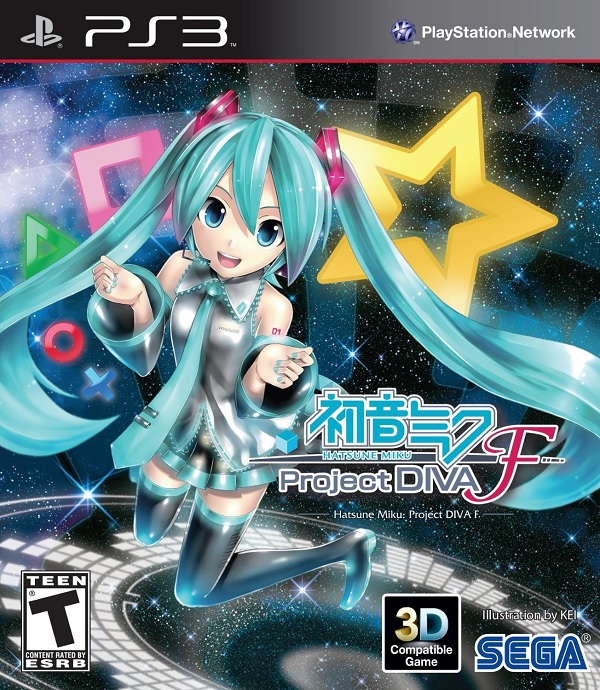 Overview
There exists a certain type of music in Japan that has slowly been gaining traction around the world. That would be music sung by synthetic programs known as Vocaloids, with Hatsune Miku always being the headliner. While fans the world over have been able to enjoy various songs created with these Vocaloid programs, seeing anything related to them in the West was simply a fever dream.

However not only has the most popular Vocaloid’s software been announced for release in North America, even Vocaloid games are making their way to the West. Where fans have always prepared to import past Hatsune Miku titles from Japan, Sega has chosen to bring Hatsune Miku: Project DIVA F to North America. Will the virtual idol and her friends make a successful landing in the West?

Gameplay
While there is more to Hatsune Miku: Project DIVA F than a music rhythm game, that is where the bulk of the title’s gameplay lies. When players first start the game they can, and probably should, go through the game’s brief tutorial session where a very basic song is used to teach players the ins and outs of playing their way through each song, such as what certain icons mean and special song segments that will appear. This is also the time to determine whether or not you will need to adjust the note delay to match any inconsistencies with your television set. Mine had no issue but it could affect some users and there is an option to adjust the timing to match your television. 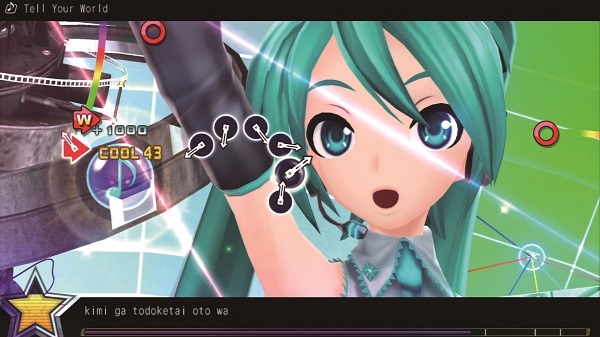 For the most part, playing through any song in the game is very basic. As the song plays and the animation plays in the background, various note outlines in the shape of the PS3 controller’s face buttons will appear and the player must press these buttons when the floating note lines up with the outline. These notes appear either as silhouettes which require one tap, or colored which require the player to press and hold the button for a set period of time.

There are a few other icons that will appear in each song, such as colored arrows. To successfully nail these notes, players must press not only the d-pad in the proper direction but also the face button that matches with that direction. For example, a blue down arrow requires the player to press down and X at the same time to succeed. Also implemented are Star notes that are completed by simply flicking an analog stick. Thanks to the less intuitive entering method for these notes, Star notes tend to always appear in long segments where they are the only notes played; making these segments usually the easiest to play through. 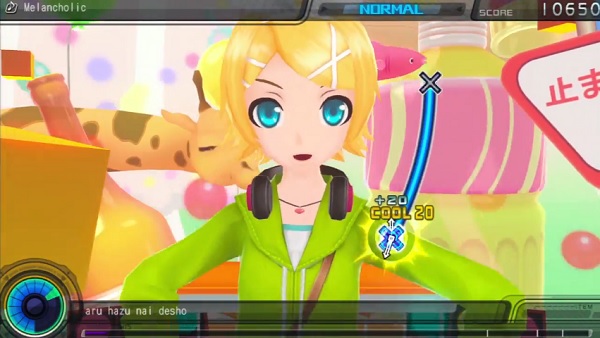 Every time that a note is played, the game will rank you depending on how accurate you were with each button press. Cool and Good presses add to the player’s score combo while Safe presses are also good, they break the players’ combo, and Bad and Awful presses not only break the combo but can lead to the player failing a song if the game’s meter falls too low. Now you may have noticed that I mentioned score a few times, and that is because the title rates every song you do on a scale from Standard to Perfect. It is possible to complete a song and actually fail the scoring procedure if you do poorly.

Throughout each song there are various special segments which will appear and these are the Technical Zone and Chance Time segments. Technical Zone tasks the player with hitting every note for a limited time with either Cool or Good precision and completing these segments provides a boost to your final score. As for Chance Time segments, they feature a Star meter in the corner that is filled up by successfully hitting notes with rainbow trails and if you manage to fill the Star up, not only is a bonus added to your score but a special event will occur in the music video. 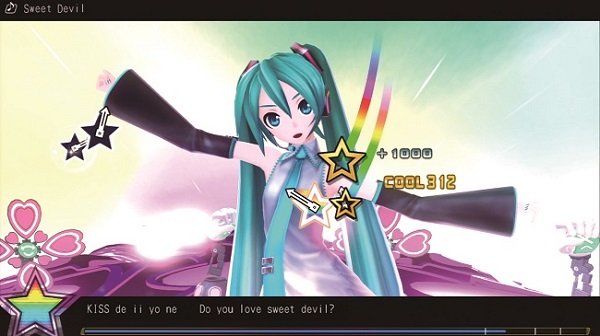 When the game begins, you are only given a number of songs to start with but every successful song completion will unlock another new song to be played. Each of the songs are playable on various difficulties, with Easy and Normal songs already available for use but these songs must be completed on Normal before moving on to the harder difficulties, with each difficulty increase seeing more variation in the notes that have to be pressed, more notes to hit and less time to do it in.

Completing a song not only rewards the player with more songs, but also Modules, which are costumes, and accessories for their favorite Vocaloid to wear. These unlocks are not immediately made available for use as they must be purchased with ‘Diva Points’ which are rewarded to the player for completing songs. Also whenever a song is completed, the player is given a chance to simply watch the music video without having to worry about playing the game at the same time. 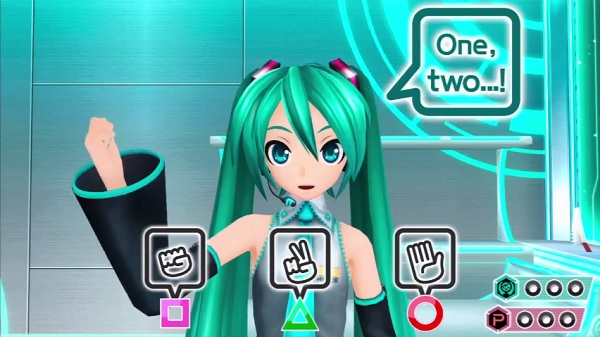 Now earlier I mentioned that there was more to Project DIVA F than simply a rhythm game and that is true. There is also the Edit Mode where you can actually create your own song and dance routine using the Vocaloids with MP3s from your system, a Studio which allows the player to watch specific, unplayable songs, performed on stage and a place where you can take pictures of your favorite Vocaloid posing and wearing Modules you’ve unlocked.

Finally there is the Diva Room which allows you to “interact” with the different Vocaloids in the game in a private room. These interactions are rather basic such as rubbing their hair, giving them food or gifts and playing games with them. The room is rather basic but does add a little something extra for fans of Vocaloids. Everything involving the rooms have to be purchased from an in-game store with the aforementioned Diva Points, making the game feel rather grinding at times as players save points to not only unlock costumes and accessories, but also buy items for their Vocaloids.

Visuals
Hatsune Miku: Project DIVA F doesn’t push the PlayStation 3 to its limits by any means, but it does give Vocaloid fans everything that they want. The game is brightly colored and there are numerous bits of fan-pleasing items included in the game, such as numerous pieces of artwork of each Vocaloid in the loading screens. Each Vocaloid looks wonderful and the character animation is nicely handled with every song.

As for the music videos, each song has a unique setting and choreography which is almost always colorful and flashy, though it can be rather distracting at times, causing the player to miss notes either due to the events happening on screen or the coloring of specific notes to specific sequences in a song. This makes the ability to watch songs without the need to play the game at the same time quite an enjoyable feature as it gives players a chance to enjoy the game’s gorgeous animation without worrying about matching notes. 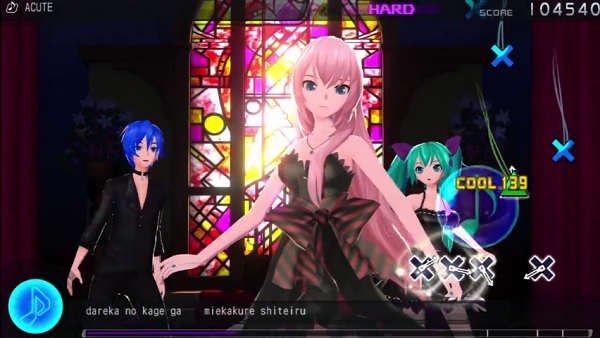 Since I haven’t mentioned it yet, Hatsune Miku, Megurine Luka , Kagamine Rin, Kagamine Len, MEIKO and KAITO are included in Project DIVA F and each one comes with a number of modules to dress them in and while each song has a specific theme, until players purchase the Module the character will wear their default attire. Though it is worth noting that any Module can be used in any song and even the characters that dance in the song can be changed, but the vocals do not match the character shift.

Audio
Being a music rhythm game, especially one based on such a devout fan base, the songs can make or break the game. Thankfully Hatsune Miku: Project DIVA F features numerous songs from each of the aforementioned Vocaloids, with most of the songs coming from Miku and the Kagamine twins, with MEIKO and KAITO ending up with the least. There are cutesy songs, dramatic ones, fast paced, slow paced and many others that change up as the player goes through them. While some fans may be disappointing that their favorite song isn’t in the game, with 38 playable songs and a few others hidden elsewhere in the game, there is more than enough to choose from. 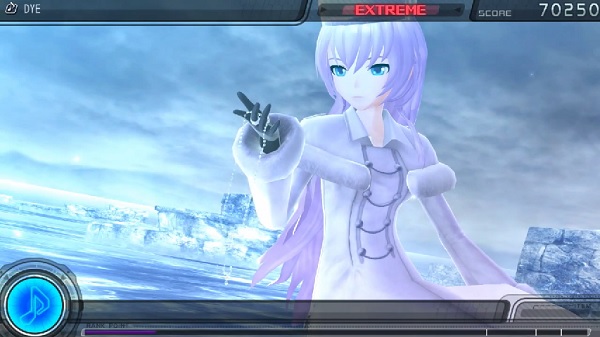 There is one thing of note however with the game’s music. The original lyrics of the songs were displayed with Japanese characters above the Energy meters and for the English release of the game; Sega has changed these characters into English letters. While this is nice for those who want to sing along to the music, it begs the question as to why the company did not go the extra step to provide actual English translation to the music being sung, minus one Luka song which is sung in English anyways. While gamers won’t be paying attention to the lyrics while playing a song, this would have been useful whenever the player chose to watch the music video or a stage performance, but unfortunately that option is not available.