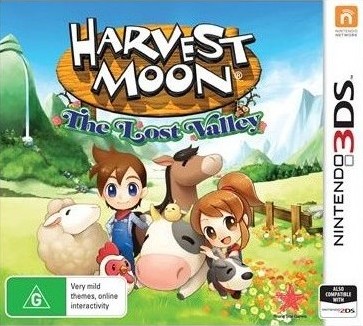 When Nintendo described this game as having “streamlined controls”, it seemed like a warning. Making things easier can be a great way to attract new players to a video game, but unless the controls are tweaked in just the right way, the game will end up being boring or even annoying. Is this game suitable for the ardent Harvest Moon fan and the newcomer alike, or is it simply tedious and lacking in entertainment value?

A severe snowstorm causes you to become lost. A voice beckons you into a house, and you sleep there for the night. Upon waking up, you hear a voice calling for help. While attempting to locate the source of the voice, you enter the snow-covered farm and discover a Harvest Sprite. This Sprite, Rowan, tells you that you are in the Lost Valley and that it is stuck in a perpetual winter. The Harvest Goddess is the one who is supposed to control the seasons, but she lost the bracelet that gave her her power. Rowan just so happens to have this bracelet, and immediately entrusts the task of delivering it to the Harvest Goddess to you. Your goal now is to build a farm, grow and harvest all kinds of plants and raise animals. 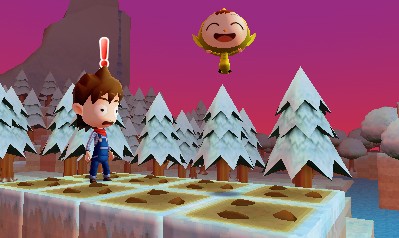 If this game is any indication, Natsume has not yet made the distinction between ‘easy’ and ‘fun’. Streamlining a game does not automatically mean the same thing as producing an entertaining and engaging game. You cannot dig in or raise the block you are standing on, meaning that you often have to create a new platform to be able to dig or fill in a certain spot. Digging or filling in blocks is otherwise easy enough with the game’s simple controls, but the system should be less restrictive. Players with plenty of patience may not have a bad time working on their farm, but the developers made other poor decisions when working on the gameplay. When a block of land dries out, you have to water each individual block one at a time. In other games that feature farming, you do not have to press the ‘A’ button to water every single block, which is not fun when there are dozens of dry blocks that need to be watered.

As you make progress in the game, more and more Harvest Sprites will wake up and offer to help you with various tasks. One Sprite, Dewy, is supposed to water your fields for you. He does do that, but only about 10 blocks at a time. If you watch him, you will see a few blocks get watered only to see an equal or greater amount of blocks dry out in the time it took him to water those few blocks. This means that it is actually more efficient to water each block of land one at a time, a monotonous task that can take up an entire in-game day. 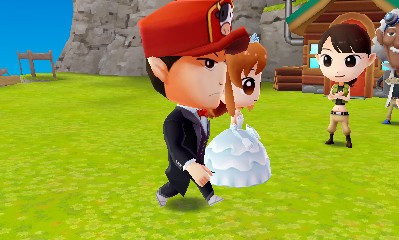 You can increase your friendship percentage with the people you meet by doing requests for them. There is almost no sense of fulfilment when doing these requests; completing them seems more like making a business transaction than making friends with people. It does not help that it takes hours for their dialogue options to change, and the random number generator has a tendency to pick the same line of dialogue several times in a row when you are talking to someone. There is a dating-sim element to this game, but there are only three archetypal characters to choose from as romantic partners. Furthermore, the interactions with them are extremely limited. There is apparently no same-sex dating option, giving less incentive for people to engage with the social features of the game.

There is another problem that can occur, to a certain extent, depending on how you play the game. Often, you will not have the items nor the means to grow or acquire the items that are requested. This means that requests might be left in your queue for many in-game weeks. Fortunately, if you already have the requested items in your bag, you can complete those requests in a matter of seconds. 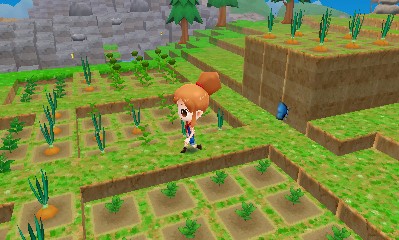 The 3D feature can only be turned on while the title screen is displayed. However, in this game, stereoscopic 3D would be a gimmick, not a genuinely useful or interesting feature. The tree textures are progressively rendered when the camera is panning across the farm during the opening scenes of the game, although this problem may not be present when the game is played using a New Nintendo 3DS. Either way, it really does not make for a good start to the game. Moving the camera into the right position is often a matter of precision, but this may vary for each player depending on the exact layout of your farm.

There are a few bugs that might entertain players for a few seconds. If you walk into a player from the right angle, you will walk straight through them. Your cow might get stuck and then go out of control as it walks to the troughs in your barn. Also, upon completing a quest, the hitboxes of NPCs often extend several blocks in front of them, meaning that you can talk to them even if you are four blocks away. There do not seem to be any glitches that can be exploited to make the game easier to finish, but one may still wonder whether or not there was some kind of selection bias when the QA team was selected. 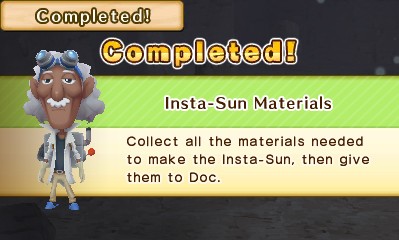 The character designs are passable but nothing special. It is disappointing that you cannot customise your avatar at the very beginning of the game, but you can eventually buy a wardrobe that will allow you to wear different clothes. Unfortunately, the wardrobe requires you to have a few types of materials and a lot of money. If you are strapped for cash, weekends are a great time to go fishing; fish can be sold at a decent price.

The soundtrack features just a few pieces of music, but the songs are not bad and a couple of tracks are even pleasant to listen to. The songs all loop after just 30-60 seconds, though, so you are going to have a problem if you get sick of any of the songs. The sound effects are nothing to write home about, but some of them sound as if they are being played through several audio channels. 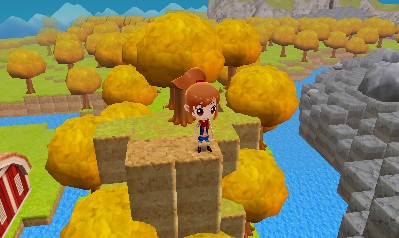 Harvest Moon: The Lost Valley has its moments, but playing it is a matter of patience. The challenge is not in defeating a boss several levels higher than you or completing a challenge in a limited time-frame, but in dealing with the boredom that will most likely creep up on you at some point and make you wonder what the point of doing anything in the game is. It does not offer anything that cannot be found anywhere else. This game may be suited only for those who can deal with dozens of hours of tedious and monotonous gameplay, and even then its appeal is extremely limited.