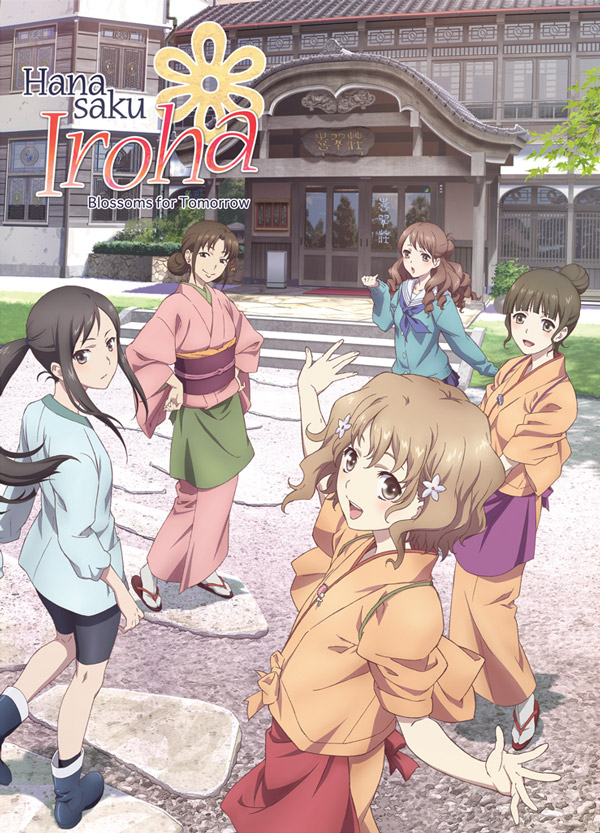 Overview:
Anime that tackle the issues teenagers go through while growing up are quite common in the industry but few of these manage to do so in such a way that doesn’t force the cast into combat or into an outlandish situation that they must work together to overcome. Hanasaku Iroha: Blossoms for Tomorrow originally aired back in 2011 and now that NIS America has brought the series to North America, will volume one deliver something memorable? 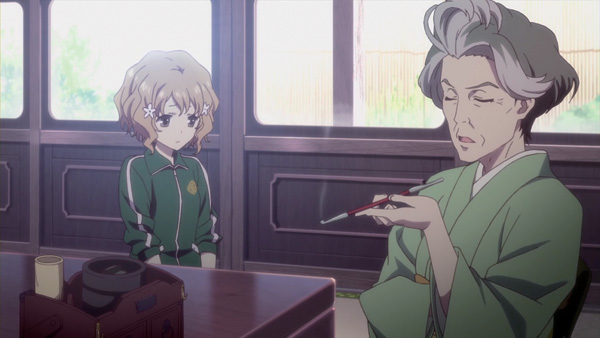 One night when Ohana learns that her mother is running away with her new boyfriend from creditors she believes that she may be able to reinvent herself. That is until she is told that she isn’t going to be taken with them and is instead going to be shipped off to the countryside to live with her grandmother which disowned the both of them long ago.

To make matters worse, before Ohana leaves for the countryside, her best friend Koichi confesses his love to her before running off. This is the least of Ohana’s worries though, because once she arrives at her grandmother’s place she learns that she must work to earn her keep at the Kissuiso Inn that her grandmother, Sui, owns. Being the newcomer to the inn, Ohana must not only work harder than ever to prove herself, she tries to get along with the rest of the staff all while trying to find who she is as a person. 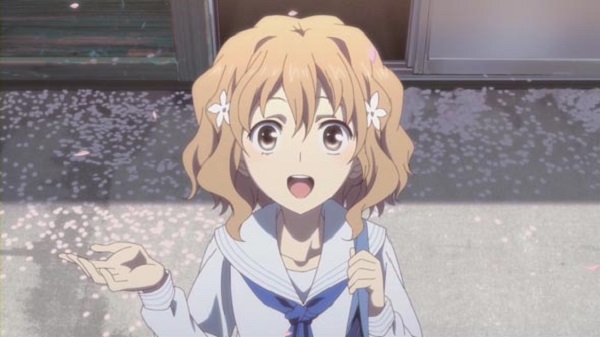 Hanasaku Iroha’s storyline is one that is focused entirely on the characters themselves and not on any extravagant plot outside of teenage city girl being forced into an unfamiliar and trying life in a new area. While some slice-of-life stories would falter or turn into something generic with a premise such as this, Hanasaku Iroha Volume 1 actually manages to pull it off quite well is thanks to the characters within the series, especially Ohana herself.

Ohana’s attitude towards her new situation does wonders for the series initially as she takes every adversity and challenge thrown her way as something that she can do to better herself. Even when she initially causes friction with her fellow co-worker Minchi, Ohana does her best to try to get closer with her and become friends with the rest of the girls her age at the inn. 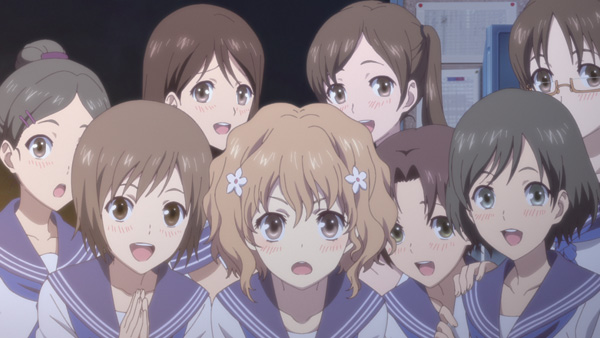 The supporting cast also plays a major role in making Hanasaku Iroha an enjoyable slice-of-life series. These characters are all unique in their own way, though a few do fall into your standard character parameters, such as the shy girl, tsundere girl, etc. However even with these stereotypical character archetypes, the cast is developed well enough that they are expanded past those initial impressions; because of this viewers will find themselves caring a bit more about the characters’ personalities and the issues that they are involved with.

It is worth noting however that Hanasaku Iroha is the definition of a slow-burn series. By focusing more on building up the characters of the series and making it that all story-arcs are based on these characters, there are a number of very long arcs that can take several episodes to conclude. Also, the series has an issue with introducing some plot points and then dropping them for a long period of time, though despite this problem volume one manages to wrap up a number of hanging plot points, though there is plenty left for the second volume. 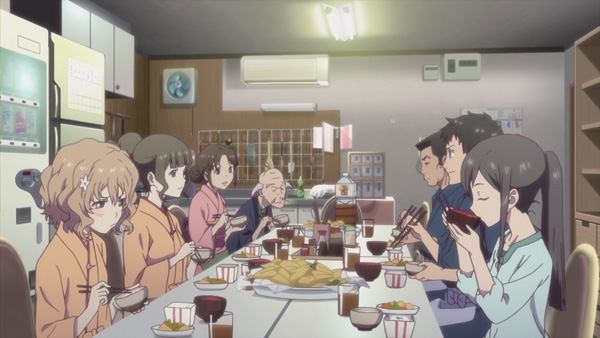 Ultimately Hanasaku Iroha: Blossoms for Tomorrow is a series that keeps to a slow pace with only minor pieces of drama that help develop the characters. This slow pace may be troublesome for some, but thanks to a lot of humorous moments, very light fan-service and a stellar cast of characters, this charming series will be hard to pass up.

Visuals:
If there was one word that could summarize Hanasaku Iroha it would be “gorgeous.” There is a stunning level of detail in almost every scene that viewers are presented with. While characters are always the highlight of a series, the environments and background scenery in Hansaku Iroha are presented in such detail that it is impossible to ignore, though it is a shame that this scenery isn’t shown off more often in the series since it focuses heavily on the events that occur within the inn. 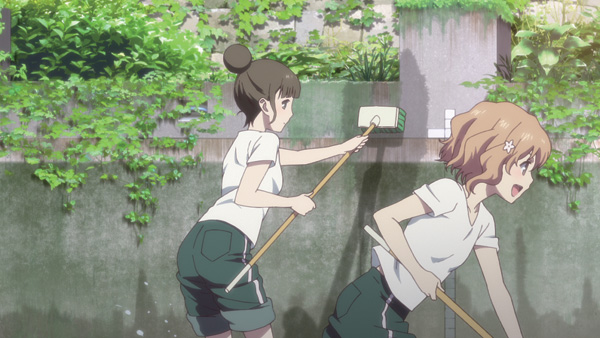 As for the characters themselves, those familiar with some of NIS America’s video game releases may feel like they recognize the art style, but more on that later. These characters are nicely detailed with a wide-range of facial expressions that help sell their emotions and for a series that relies heavily on how much a viewer likes the cast, this is essential.

Audio:
Now it is worth noting that since this is an NIS America release, Hansaku Iroha: Blossoms for Tomorrow Volume 1 only contains the original Japanese dub. This isn’t an issue however as the original voice cast has done a great job with these characters with believable voice work that matches their personalities. 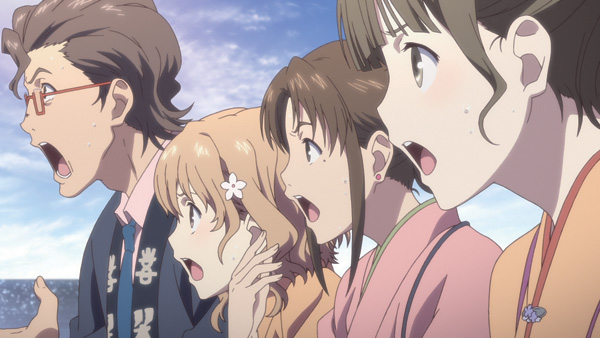 As far as the series soundtrack is concerned, there are a number of relaxing tracks that are very light on the ears and even a few songs featuring vocals scattered throughout volume one. The opening theme for volume one is “Hana no Iro” by Nano Ripe and the ending theme is “Hazy” by Sphere. Both of these themes are soft and light on the ears, which fits the nature of the series perfectly though viewers will likely find themselves skipping these themes due to the fact that they simply do not stand out in any significant way.

Extras:
NIS America has continued their tradition of providing excellent “Premium Edition” packaging for their initial anime releases and Hanasaku Iroha: Blossoms for Tomorrow Volume 1 is no different. The release contains an oversized chipboard slipcase featuring artwork on the cast on both sides, the cases for the Blu-rays and DVDs, which feature some minimal on-disc bonuses such as the clean opening and ending theme and the original Japanese trailers, and a large hardcover color artbook.

Earlier I mentioned that some may be familiar with the character designs in Hansaku and once they glance at the artbook or even the cover art on the slim cases, they may realize where they recognize it from. The character designer for this series is Mel Kishida, best known for his work on providing character design in the Arland video game series of Rorona, Totori and Meruru. 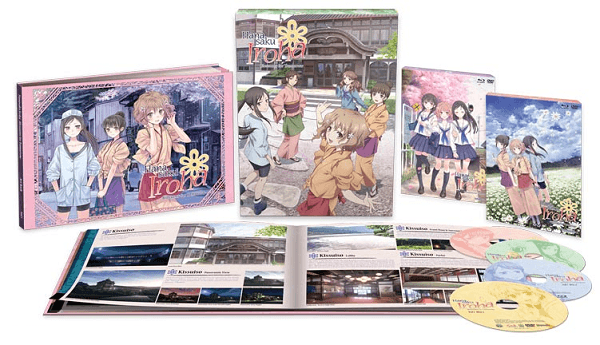 The artbook itself contains a number of character sketches including information about the characters introduced in the first half of the series, numerous images of the anime’s amazing background scenery and descriptions of the scenes, a number of staff interviews including one from Mel Kishida, and finally more character sketches with Kishida providing insight into why he designed the characters the way that he did.

Overall:
Hanasaku Iroha: Blossoms for Tomorrow Volume 1 is a memorable series in a number of ways. Despite rather slow pacing, the series is calming more than anything else. While there is drama here and there, it is usually rather light and the characters always end up growing because of it. Volume One excels at the basic principle of the slice-of-life genre by telling not only a charming character based story that is laced with comedy and character growth, but by doing it with such a stunning amount of artistic detail to not only the characters but the scenery as well. With  a second volume on the way, viewers who enjoy calming slice-of-life series such as this will be hard pressed not to continue following Ohana’s story as she grows accustomed to her new life.