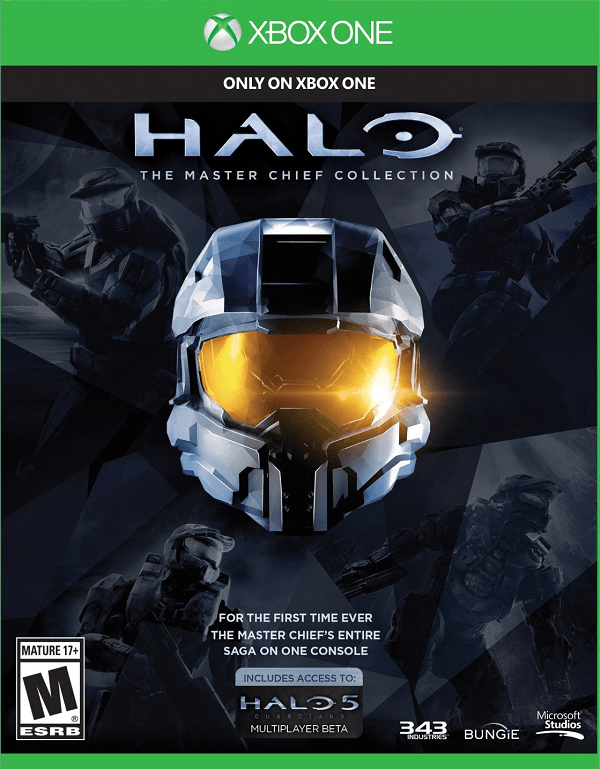 Overview
Ever since Halo: Combat Evolved was released in 2001, fans of the series have come to expect quality from each and every title and while the series may have had a few small disappointments so far, fans have followed the story of Master Chief and Cortana throughout the years and experienced great titles that delivered on most fronts. So now that Microsoft has not only remastered Halo 2 but released the first four Halo titles in Halo: The Master Chief Collection, does it warrant a purchase?

Story
After humanity began to colonize other planets; they encountered a powerful and advanced collection of alien races known as the Covenant. With the Covenant using their superior technology and cursing humanity as an affront to their gods, humans quickly were on the losing side of the war until the SPARTAN project began placing genetically enhanced super soldiers on the front lines and none of these SPARTANs is as skilled as Master Chief. 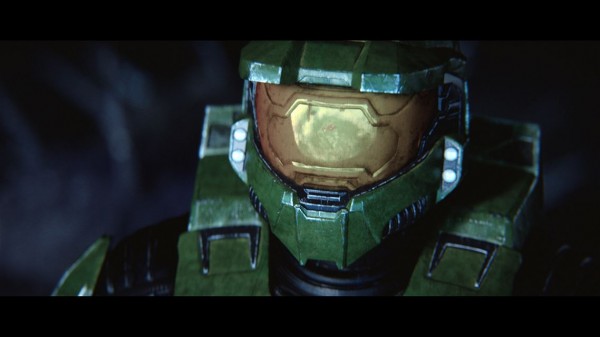 Throughout the course of the four games included in Halo: The Master Chief Collection players will be able to experience every high point of the series’ multi-title space opera as we follow Master Chief as he battles against the Covenant, uncovers an ancient threat that will destroy everything in its path if it is not stopped, teams up with former enemies, battles against yet another ancient race of beings and more.

It can be said that those who have somehow never managed to explore the world of Halo will find that this package contains everything you will need to experience the best that the story has to offer, which is a lot. As for those who are returning to the series you will be happy to learn that every story mission is unlocked immediately when you start the title, allowing you to jump around as you please, giving the player the option to play all of their favorite moments while skipping some of the lesser sequences. 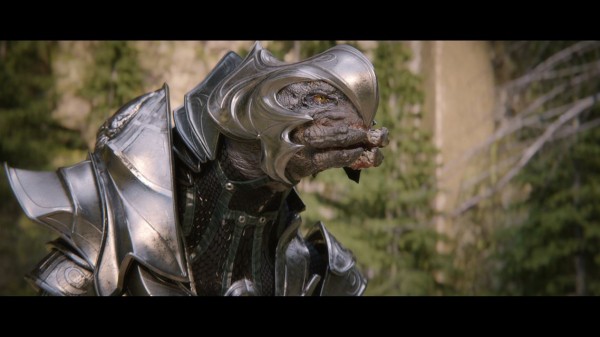 It really must be said that Halo 2: Anniversary is the real star of this collection as not only does it benefit the most from graphical enhancements and audio improvements that will be discussed later, it also features brand new snippets of storyline found in terminals as well as a number of new cutscenes that drop hints towards Halo 5: Guardians.

Gameplay
One of the best aspects of Halo has always been the way that it has handled its shooting mechanics and the intelligence of the enemy Covenant. Limited to a two weapon at a time system, players control a scientifically enhanced human that your enemies will fearfully and respectively call the Demon as he lays waste to their ranks in a series that remains one of the best designed first person shooters to date.

With your enemies varied to include weak and cowardly Grunts capable of suicide attacks and empowered by their brethren, Jackals that make use of shields formed of energy to protect their fragile frames, Elites capable of dishing out and receiving heavy punishment through the use of their recharging shields, and much more, players will always need to think on their feet to take out the numerous enemies they come across as entire areas will feature mixes of enemy types that fight intelligently and can be quite deadly on higher difficulties, especially with various modifiers on. 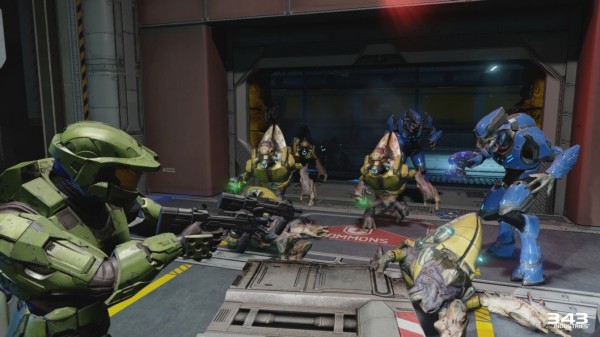 Throughout these games players will learn to master the Chief’s core combat mechanics as they make use of his firearms, various grenade types, powerful melee abilities, and skill with the various vehicles of war that humanity and the Covenenant have crafted to kill one another. With such a combination of weapons and tools at the player’s disposal, there are countless ways to tackle any situation no matter how daunting it may appear, and if you feel like it you can even bring an ally with, either online or locally, to help out.

As you progress throughout the four titles you will notice various changes to the way that Master Chief performs as well as the various abilities he is capable of using. In Halo: Anniversary players will need to be concerned about a health bar alongside their rechargeable shield where titles after that drop this function and focus entirely on the shield and regenerating health. He will also gain the ability to dual-wield certain weapons from game to game and once you make the jump to Halo 4 then you will be in for quite a different feel as not only does this title introduce a number of new mechanics to the game such as the ability to sprint, create bubble shields, turn invisible, and more, you will also need to face off against a different and far more challenging opponent than what was experienced in past games. 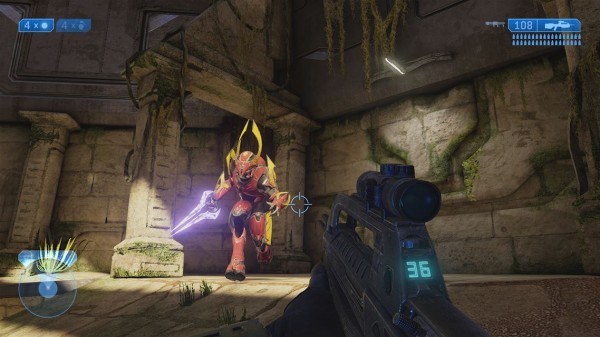 As I mentioned earlier, players can add various modifiers into every level of Halo: The Master Chief Collection to create a new experience. Since the core gameplay and various stages have remained virtually untouched, which is something of a testament to how great these mechanics really are, players will want to add various modifiers through skulls to really spice things up in the single player.

Now as for the multiplayer aspect of Halo: The Master Chief Collection, things are kind of a mixed bag. I say this because despite the multiplayer always being a key drawing point for the franchise, the competitive online play has been struggling to perform properly since the collection launched. These multiplayer modes, regardless of what title’s multiplayer you want to experience, generally always experience some sort of issue when it comes to trying to find a match. You can easily spend an hour trying to find a match even on suggested playlists only to be placed in a near empty lobby or even booted out of the game entirely. 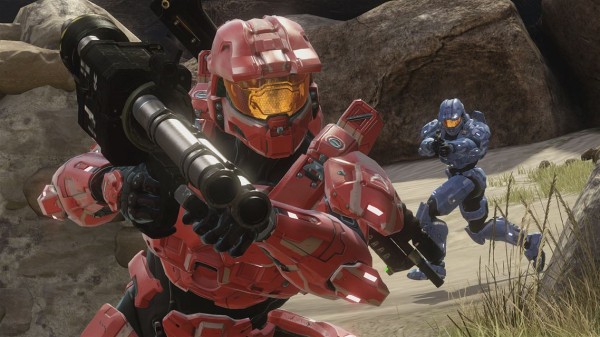 When you do manage to enter a game of multiplayer, you will find that the experience is just the same that you remember it, featuring various game modes such as standard team deathmatch, infection, oddball, capture the flag, and more, just better looking. Fighting once again on the nostalgic battlefields of Halo 2 is a major treat and now you will also have the option to play all of the other game’s various multiplayer modes as well, though you will need to once again be prepared for the various changes in style and mechanics that the series has went through. This is thanks to the fact that if you manage to secure a solid lobby, players can easily swap between maps from all four Halo games, so one match that took place on Halo 4 can be followed by a fight in Halo 2, meaning players will quickly need to remember various tactics and the changed mechanics between titles such as certain dual-wielding weapons being disabled, lowered weapon ability, using bubble shields or lockdown, and more all depend on what title’s multiplayer you are trying out.

Visuals
With the release of Halo: The Master Chief Collection, 343 Industries has brought all four titles up to support 1080p and 60 fps creating a fluid experience for the un-remastered titles, Halo 3 and 4, and making the enhanced Halo Anniversary and stunningly remade Halo 2 Anniversary look even better than fans could imagine. While the other three titles may look similar to how we remember them, Halo 2: Anniversary has been completely built from the ground up in certain areas and you can really tell the difference thanks to the ability to swap between classic and modern graphic styles instantly, even in cutscenes. The cutscenes handled by Blur are more than just stunning; they are everything that gamers should expect a modern gaming console to be able to deliver. 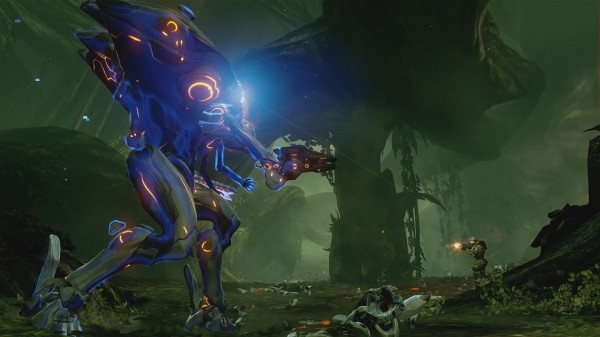 As I mentioned, the ability to swap between graphic styles returns in Halo 2 as well as Halo and while there might have been a small delay previously, the change is now instantaneous, making for a stark comparison to how things used to be over a decade ago in Halo 2 and how lush and detailed everything looks now.

Audio
Similar to the way the graphics have been overhauled in Halo 2, the title’s sound effects and dialogue have appeared to be remastered as well. A number of the game’s weaponry has been modified to sound a bit different, though players do not have an option to swap between the old sound effects and the new. As for the actual voice work, the characters sound similar to how one may remember, though the enhanced audio quality really helps make the various cutscenes deliver on presentation. 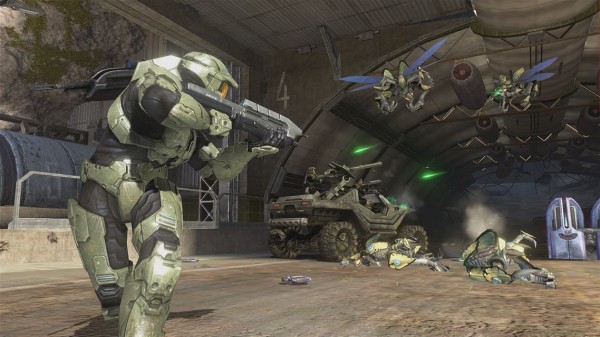 As for the soundtrack, the Halo series has always supported an amazing orchestral soundtrack and that remains true not only in the other three titles, but also in Halo 2 where every scene featuring a rising orchestral track in the background feels that much more important as you blast your way through enemy forces and try to put a stop to whatever threat is between the Chief and his objective.

Overall
Halo: The Master Chief Collection is a massive offering that not only gives players the best that the series has to offer, it also delivers on an unprecedented scale that gamers will find themselves delving into for months to come . With all four campaigns to play through, new hidden extras, a plethora of modifiers, playlists, and maps to experiment and mess with all contained on one disc with an easy to navigate menu, it will take quite some time before someone finds themselves lacking a new mode to try out. Although there are some matchmaking issues present in the title, each title’s multiplayer delivers on a scale that fans have been hoping for and newcomers will love, making Halo: The Master Chief Collection an essential title for anyone who owns an Xbox One.