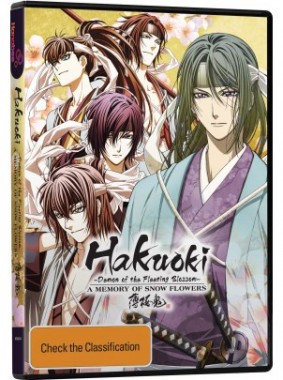 The Hakuoki series stretches a far ways back. It started out as an “Otome Game” then moved into “Otome” Anime, which seems to be a trend that I’ve only recently taken notice of. Set in Edo japan and based around the life of the Shinsengumi makes this anime seem really cool but something I stress shouldn’t be forgotten is that it’s very much for the ladies out there. Now I’m not too sure about Series 1 or Series 2, Record of The Jade Blood, but this little 6 episode OVA is very much in the “Otome” style. 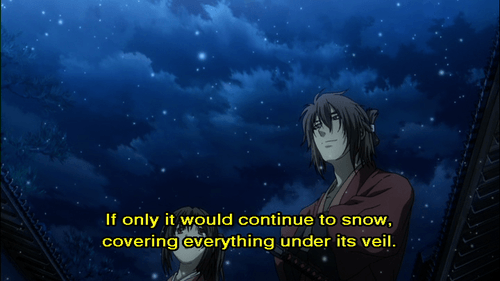 They seem to enjoy the snow in this OVA. Maybe a little too much…

The actual full back story for the entire series is basically a girl named Chizuru comes to the capital in search for her father, she gets taken in by the Shinsengumi who, after a few events transpire, now welcome her as a friend and, somewhat, part of the team. They, in turn, help her in her quest to find her father all the while making crack jokes about how cute she is and doing all they can to prove they are very attracted to her and not their cutesy, cutesy male counterparts. It’s very much your typical “Otome” style set up. The OVA doesn’t follow that exact story of the rest of the series though. While the characters are the same and the backstory is still there the OVA just focuses around a few days, maybe a week, in the life of the Shinsengumi and Chizuru. The team catches word of a bunch of Ronin who are planning an attack on the Shinsengumi base so what do they do? They dress the girl up like a beautiful geisha and send her in to the “Gentlemans Club” where the Ronin are chilling so she can gather info all the while exclaiming how cute, beautiful, pretty, lovely, [Insert Descriptive Word Here] she is in the costume. Now a lot of things progress and get interesting near the end but I didn’t feel like it was good enough for me to get sucked into it. Maybe it was the 2D character personalities, maybe it was the constant fan service (Flirting…for those girls out there) or maybe it was the fact that I couldn’t understand how such a powerful, historical group was portrayed. Let me say; If you’re going to add the Shinsengumi into a series at least have them be professional and honourable, don’t have them act like children that get starstruck over a young girl in make-up, but then again it is the “Otome” style and it is my own opinion. 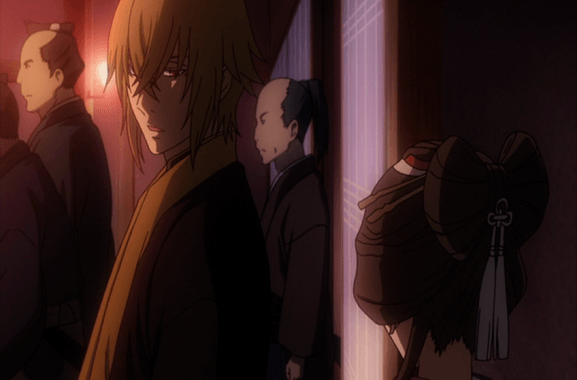 What I DID like about this little OVA was the way the story was told not the story itself. The characters seem to repeat themselves and you tend to hear a lot of muffled yells and dialogue this is because the story is set over a few days at most but it is told in a very “Pulp Fiction” like manner. Things that characters say in the first episode will be heard through the walls of another room in the fourth episode. That was just an example but you can see why exactly I liked that type of storytelling, it’s very interesting and by the last episode you know what’s going on and what happened in what order. If this show just ditched the “Otome” stuff and did more work on characters it would actually be an awesome series but that’s not something you can change at this point in time and, I suppose, that’s what made the series popular. Once again this is just MY opinion.

This series looked fairly nice. The backdrops were good, the characters had fairly good costumes, and the animation was “alright”. It was a very typically-made Anime to say the least. Apart from the fact that this show was almost entirely occupied by the “Pretty boy” Shinsengumi team the actual costuming was good. You got the vibe of historical accuracy and yet also the feel of some Anime flair. They did THAT well. What I didn’t like was the style the characters were drawn in; very pretty, very girlish, very much the fan service the series is known for. The animation was very typical, there was a great deal of talking so the series never got the chance to show any well-animated action scenes though that’s not to say they weren’t given the chance; a lot of the action scenes were shown, literally, behind closed doors. It made it feel lazy. 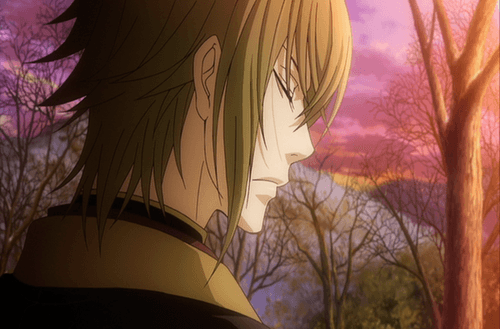 You’re in Edo, It’s time to brood over Edo stuff.

Another very basic part of this Anime. The music was traditional so it fit normally, there actually wasn’t a great deal of it though, definitely not enough of it for me to take away and rave about. The voice acting was, once again, “alright” I don’t blame the voice actors because the characters they were playing were fairly 2D, personality wise, so it’s just another case of “They had the chance, they didn’t take it”. The dialogue was very over played; sometimes a character would be too broody or too whiny and it really wasn’t good. I felt that there was no correlation between a characters personality and it’s dialogue. It just didn’t work. 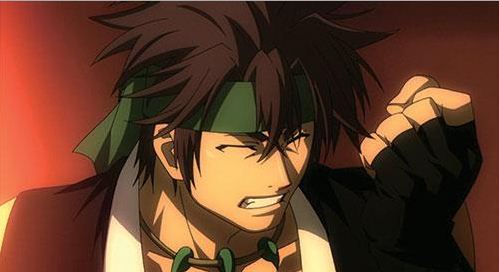 They love Sake and they love complaining. Is that an ancient Japanese thing?

This is a pretty standard, simple Anime release. The only extras on the discs were the clean opening and clean closing sequences. Kind of disappointing but on the same note I can’t honestly think of something I would’ve liked to see as an extra. There wasn’t even any nice artwork on the flip side of the cover. 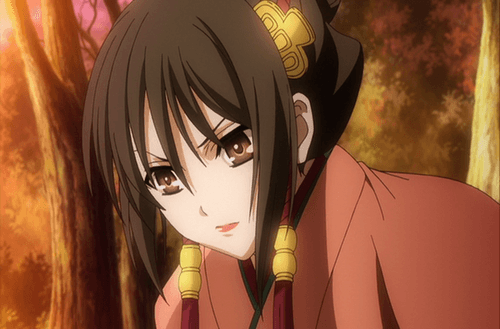 She’s cute which is great because she’s SURROUNDED by pretty boys to flirt with.

Like a lot of these types of Anime it is best suited to a particular audience. It has a lot of things that set it back and really could’ve been worked on BUT the way they told the story was enough for me to not totally hate this show. Some character designs were cool, if not too effeminate, and had flair. Look…watch this Anime if you like the “Otome” stuff, it really is not for everybody but it does have little things here and there that make it bearable. It’s just “One of those” Animes.