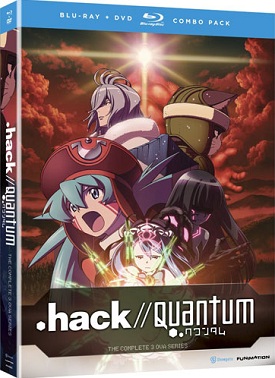 Overview:
The .hack series has been around for nearly a decade and over that time we have seen multiple video game series produced as well as a number of anime and OVA’s to provide original content and sometimes even follow the events of the video games. The three episode OVA .hack//Quantum is the latest addition to the franchise. Does .hack//Quantum live up to the franchise’s name or does it not have enough Chim Chims to get off the ground?

Story:
Many years in the future, an MMORPG (Massive Online Multiplayer Role Playing Game) has been developed that has engulfed the entire world with its popularity. The Cyberconnect Corporation has created The World R:X, a game that allows the use of face mounted displays that make the player feel like they are truly in the game by providing near virtual reality like displays. 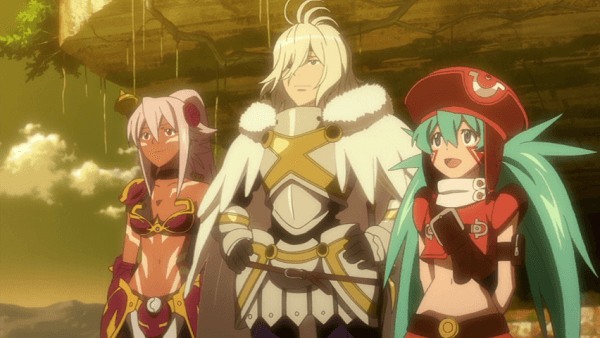 The story of .hack//Quantum follows three main characters who just happen to be friends in real life who attend the same high school as one another. The main lead is named Aida Asuma, also known by her in game character Sakuya, Ikuta Iori also known as Tobias online and finally Etou Eri who is also known as Mary in The World. These three girls have been playing The World for quite some time and love spending time adventuring and enjoying everything it has to offer.

However one day when the group attempts to sneak through a high level dungeon containing the most powerful boss in the game, Sakuya’s foolishness in wishing to catch the Yata Mirror guild’s battle against the final boss she triggers a trap that not only causes the death of nearly the entire guild but also draws the boss’ attention. Despite surviving the ensuing pursuit, Sakuya’s actions in the dungeon are not long forgotten and a bounty is soon placed on her head for malicious interference with the guild’s battle. 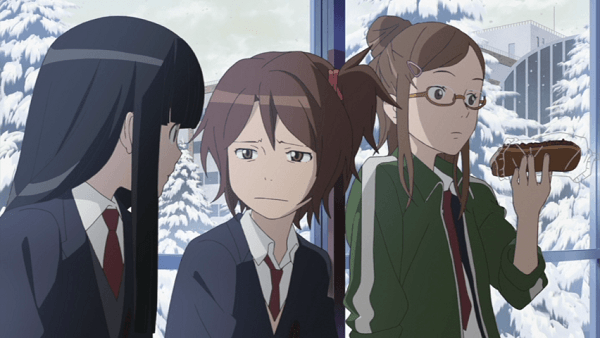 Besides Sakuya and the rest, there was one more character there however, a strange cat player known as Hermit who possesses strange powers. That happiness soon ends however as the ones who placed the bounty prepare to Player Kill their characters. Yet right at the height of the battle everything changes and The World as Sakuya and her friends know it changes forever. As darkness and mystery surrounds the group, Sakuya, Tobias and Mary find themselves in the middle of dangerous circumstances that cause anyone who is killed by certain monsters or in a certain area to fall into a coma and trap their bodies inside the game. With a friend seriously wounded and areas around The World appearing where pain is reality can Sakuya, Tobias and Mary find the truth and put a stop to it all?

With only three episodes in length, it may be better to think of .hack//Quantum as a movie more than anything else as each episode flows together at a fast pace with very little interruption from ending songs and recap. Being that the show is only a few episodes long there are it is quite surprising to see how quickly the characters can flesh themselves out emotionally. While there isn’t too much character development to speak of and only a few focused on, the short length never allows for any down time. Sakuya’s change from a careless and easygoing player into one that will do anything to save her friends is a great transition that shows how close knit the group is. Hermit is another highlight of the show who carries an interesting personality mixture of playful mystery. 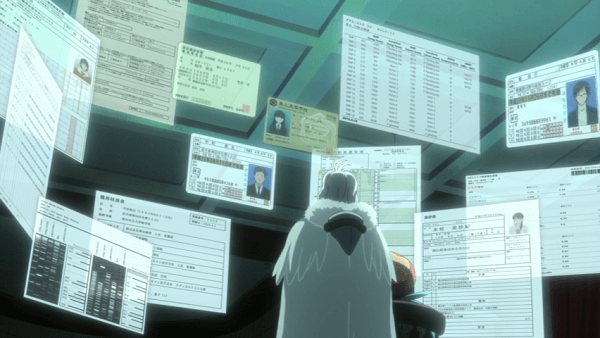 One thing that should also be touched upon is the amount of time that is spent on the outside of The World as well. Through nearly all of the .hack series we nearly spend all of our time watching the characters interact within The World itself and we rarely ever see real world counterparts to the characters and how they get along in the real world. While the bulk of the story still occurs within The World the times when Asuma, Iori and Eri are shown in the real world flesh out their personalities and provide an oft-unseen look at the effects of The World on those in the normal world.

Now for those unfamiliar with The World or any of the .hack series as a whole the show isn’t the most inviting however an uninformed viewer can still jump in and find enjoyment. They will however miss out on a number of references to past games, such as character’s from the past revealing themselves and especially a number of visual references and mentions of past occurrences within the series. Any newcomers will likely be able to still follow along however as nearly every mystery or technology is given explanation in a story that will leave you wanting more. .Hack//Quantum provides a compelling story full of mystery and likable characters that provides a gratifying narrative.

Visuals:
Being that this series is an OVA with only three episodes it is clear that the budget for the show was extremely high because the quality of the artwork the viewer is treated to is a treat for the eyes. The characters themselves are all references to past characters, such as Sakuya’s female Kite, Tobias’ take on Balmung and Mary who appears similar Blackrose. A number of other characters who stay true to the video game’s classes are there and each features the same level of detail and quality and long time fans will take pleasure picking out various background characters who look similar to main characters from past series. 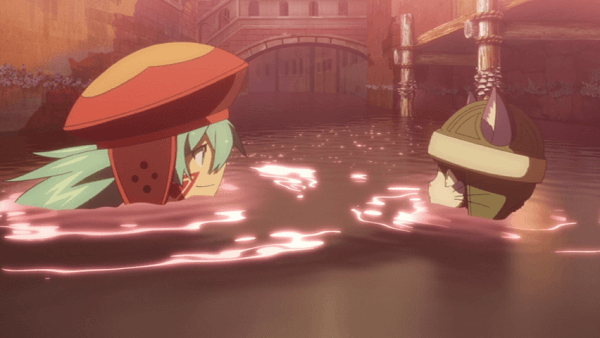 While the characters are impressive, the background detail is even more so. The World is a beautiful place full of adventure and although a number of areas are shown multiple times, the environments are high quality. Kinema Citrus, the studio who produced .hack//Quantum also did an amazing job mixing together standard animation with 3D CGI with barely any drop in the quality of the background characters or the monsters given such treatment.

Audio:
It is unfortunate that while the series is a treat for the eyes, the music as a whole is not. There is no opening song but there is an ending song called “Shizuku” by Yūka Nanri which is enjoyable to listen to and fitting for the theme of the series. It is disappointing however that the background music never takes the series to a higher level. At best the background music simply helps provide a better atmosphere for anything occurring on screen but never goes beyond that point. 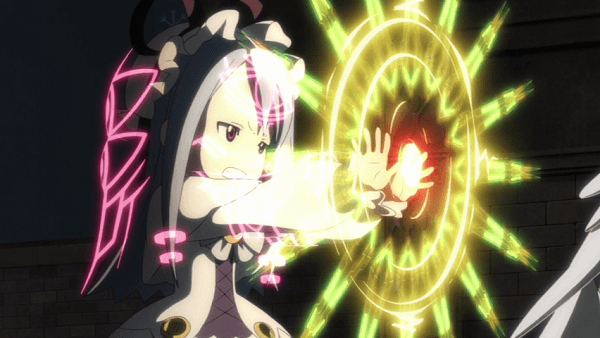 Both the Japanese and English voice tracks are provided with this release so that means viewers can choose their preferable track. The English voice actors perform their job admirably and features a few veteran voice talents. The fact that we are shown the characters outside of their player characters in The World is one of the biggest reasons that the English dub is preferential compared to the Japanese dub due to the personalities we see from the characters both in-game and outside of it.

Extras:
With this release of .hack//Quantum we see a plethora of bonus features. Unfortunately most of these special features may not be something one would be willing to sit through and watch for any given length of time. There are your more standard inclusions such as trailers for past and upcoming FUNimation releases as well as the Japanese commercials and promo videos for the title.

Also included is a three part series called Go, Our Chim Chims!! which range between two to three minutes long each and are very strange, as they feature chim chims from the show with the main characters hair styles. 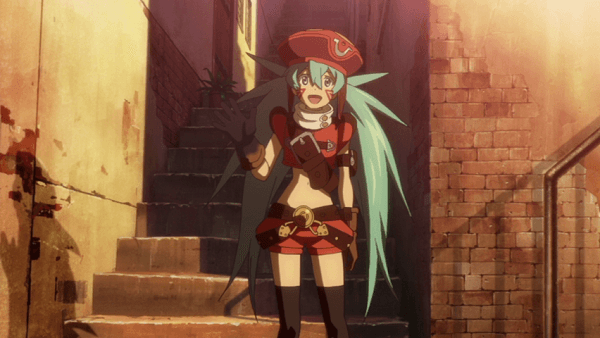 Also included is a series of longer videos featuring Yui Ogura, the Japanese voice actress for Hermit. We follow Yui as she takes cooking lessons and makes a Hermit styled bento In “Yui-Yui Cooking” as well as a club-like activity with “Yui-Yui Club” and finally a simple quiz show featuring Yui asking various obscure questions about things that occurred in the anime in “Yui-Yui Cult Quiz.” All of these specials are in Japanese and while Yui’s bonus features may be worth an extra half hour or so of your time, are not something most would wish to watch a second time.

Overall:
Now while I may not have mentioned it before, .hack//Quantum has a unique quality that none of the other series produced so far have had. That being that this is the first anime for the series that hasn’t been produced by studio Bee Train and directed by Kōichi Mashimo and perhaps it is a good thing that neither of these two things is involved with the series anymore as .hack//Quantum is probably the best part of the .hack anime franchise so far.

By showing us both the events in The World and the real world this anime has elevated the story telling by showing us that everything in the series has consequences to those in real life. This is especially true during the segment where players feel real life pain as they are injured in the game. Couple that with great artwork and animation and you have a highly enjoyable OVA worth every minute of your time.