SNK Playmore has released 8 classics onto the Playstation Network and so far, they have all been fairly decent games, although many of them desperately need a paint job and some updated gameplay. Nevertheless, for 20 year old games, they hold up on par with some of the games of today.

Guerrilla Wars is most likely the most popular of the 8 games released and it is available to Playstation Plus members for free. If you buy or receive one copy of the game, then it will be available to play on both the PSP and PS3, as is standard with all Minis on the Playstation Store. 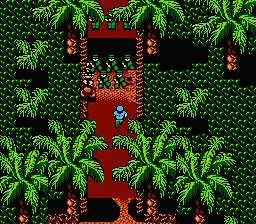 As with most games released in 1987 , Guerrilla Wars does very little to be praised in the graphical department. Everything is pixelated and the colors and textures are very basic. Nevertheless, this game’s graphics rise above those of Athena or HAL 21 (2 other games released by SNK on PSN). Character models especially look like they could, in some instances anyway, be substituted in iOS games or other modern games. 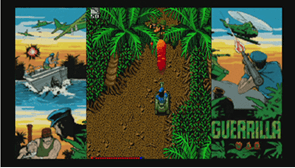 Unlike the previous arcade game that Guerrilla Wars originally was, this game only costs $2.99 and there is no quarter slot on the PS3 to continually feed it. Nevertheless, that doesn’t change anything in the gameplay department. This is a top down shooter where you must use your guns and grenades to fight a bevy of dangerous combatants. You will die, a lot. From the constant grenade spam (think World at War) to the awful boss fights, there will be a lot of cursing and raging as you play through this short little game. The “one hit and your dead” mechanic also seems a bit unfair, although the fact that you have unlimited continues and can up the lives counter to 5 does work in your favor. There is 2 player coop available if you need some help too. 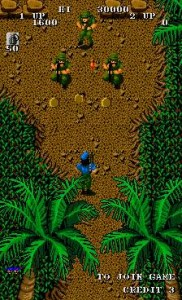 Although the game does have a super high difficulty curve, it does offer some fun and slight strategic gameplay for those willing to give it a try. As a matter of fact, I would say it is one of the better games released by SNK so far. You can pilot tanks, pick up enemy weapons (flame thrower for the win!) and wreak havok with the reliable control system. Featuring the ability to auto aim in the options menu, it is gratifying to mow enemies down as you liberate an island. Although the story is nearly invisible it is enjoyable to finally meet the final boss and have your revenge (after 8 million deaths anyway). 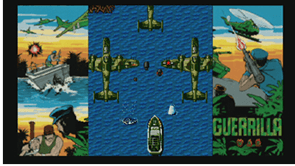 In conclusion, Guerrilla Wars is the classic game that many people remember and it is the highlight of the 8 games released so far on PSN. If you have Playstation Plus, it will offer a nice respite from all that modern stuff. For the price of a couple of candy bars, it may offer some delight to others who own a PSP or PS3 as well, especially seeing as how you can accomplish one good deed for the day by freeing some hostages throughout the game!