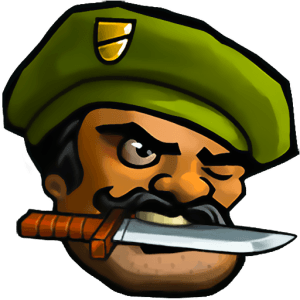 Guerilla Bob hit the iPhone in December last year gaining favourable reviews, and it well deserved it! It’s a fine example of addictive, arcade action. It’s full of colour and character, and it is well polished with easy to use pick up and play controls. Now Bob is also available in HD on the iPad iPod touch, MAC, PC and Android devices, and I must say they are even more enjoyable with a keyboard at hand. For those interested, you can check our iPhone review for Guerilla Bob here, but for the rest of you, this is Guerilla Bob from the Mac App store. 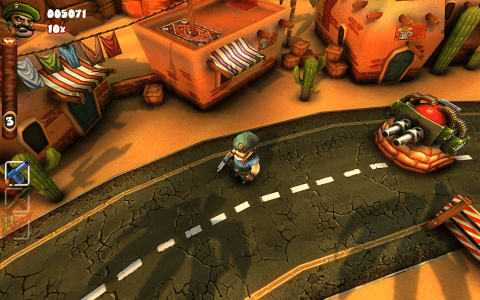 Guerilla Bob is bursting with character and is easily the greatest highlight of the game. Rocking a style-istic comic book feel to it, when introducing a new enemy, a cut scene will display, zooming in on them and revealing a humorous, cartoony name like ‘Johnny Boom’ or ‘Boris The Bullet’. Filled with bright colours and excellent character design, one can’t help but smile at Guerilla Bob’s adorable charm. While levels are pretty much straightforward, the design behind it all keeps it feeling fresh at all times, and the scenery looks brilliant. Menus and cut scenes also maintain the game’s high standards of graphics and presentation as well. Sound effects are decent, and the soundtrack is pretty impressive. Voice acting on the other hand, while decent, also sounds very cheesy, with even cheesier dialogue. It doesn’t ruin the game, but it certain is one of the game’s lowest points-which isn’t even that low! The music however does compliment the style of the game remarkably well and sets the mood going hand in hand with the graphics, everything. With all this in mind, it’s clear to see that Guerilla Bob is a truly well polished game, and Angry Mob should be commended on such a fine job. This applies to whole game itself, as while the presentation and charm of the game pulls the weight, all aspects of Guerilla Bob mix in well and rounds off the title to a must-have. 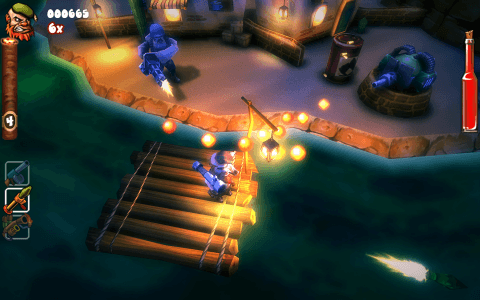 Gameplay is fast, frantic and just down right fun, firing guns with almost endless amounts of ammo that don’t need reloading against huge hordes of enemies. Players can choose between two control schemes, and having the option is a nice addition. Auto-aim will lock on to enemies automatically, with only movement and the holding of the spacebar to fire needed to play. This is a lot of fun, and provides a great feeling of face-paced, action-packed destruction. However, sometimes it may lock onto things you don’t want it too, so it isn’t always reliable, but it is most of the time. The alternative is turn off the auto-aim, using the mouse for aiming, requiring more from the player in terms of strategy, but faster reflexes are needed. Each style works great and really can change out the gameplay, and different gamers will enjoy different options, so it’s a great addition for the title. Along the way of countless enemies includes some barricades and tents that Bob will have to shoot down, which are a little annoying in the sense that it does slow down the gameplay a little bit, taking away from the fast, action packed gameplay, but again, it doesn’t take too much away from the experience and doesn’t really bring the game down. The title really has a little bit of a beat em up kind of feel to it, with only one direction able to walk in, and with the need to defeat enemies in a section before advancing, waiting on that ‘Go!’ sign. It really adds to the arcade feel of the game. What also adds to this arcade feel are the inclusion of power ups such as speed and damage. They can really give you that slight edge in combat, but more than anything it just adds to the frantic gameplay which makes Guerilla Bob a great time play. 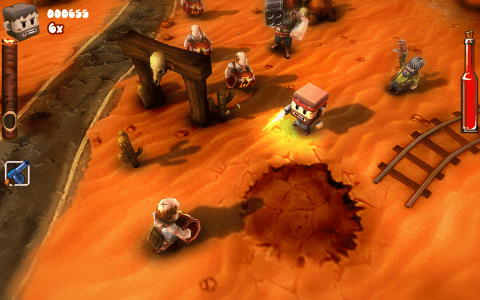 Guerilla Bob is filled with variety, with various costumes and weapons to be selected. The weapons admittedly all play pretty similar, but a few will change up your strategies and are welcome additions. Also welcome is the  cross multiplayer option which seems to run pretty smoothly, and I must say its  pretty cool you can play it on two different platforms! Really what makes Guerilla Bob such a blast to play is its simplicity. It’s very pick up and play, and it’s a great time waster for the casual gamer. The gameplay while simple is often kept fresh however which is what makes the game enjoyable, with levels and bosses such as out running a bulldozer that is chasing you. There are three (well technically four, but we’ll get into that) modes for gameplay, and each throw an interesting twist into the game. Arcade has you constantly racking up points in combat, competing for high scores, giving it a bit of a retro vibe. Mercenary is a bit more modernised with the addition of gaining cash instead of points for defeating enemies, and taking the cash to a shop for upgrades or weapons, really giving the play a sense of accomplishment. Survival is split into two modes: Classic and Wave Attack. Classic is pretty similar to Arcade as Wave Attack is similar to Mercenary. Classic will throw you in an arena and have bad guys attack you that get harder as you go along. That’s it. It’s really chaotic and again has an arcade feel to it, and is a great time waster. Wave Attack is equally as good, but has waves of enemies attack you, with cash for collection. In between waves you can spend that cash to upgrade and buy weapons as well. Survival mode is particularly fun to play as it really does test your skills and reflexes, however Story Modes Arcade and Mercenary modes have a lot more charm to them as well. All modes are really enjoyable and each in their own way throw a nice twist on the Guerilla Bob’s simple engine, really showing how polished off it is. However, it must be noted in auto-aim, they all share the same flaw in occasionally locking-on to irrelevant targets, which is particular bad in survival mode. If this was fixed, it would be very much more enjoyable. 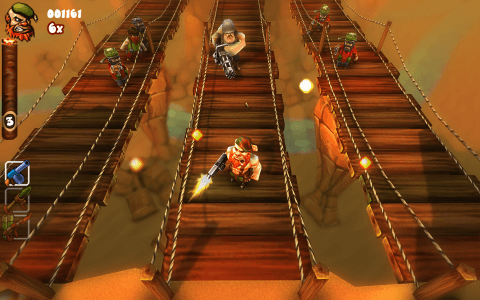 Guerilla Bob isn’t a perfect game, but for what it is, it comes damn near close. A great casual game that is well polished in almost every aspect. It’s a shame the auto aim isn’t always accurate, but its truly commendable how the simple ‘hold shoot and run’ aspect has been milked dry but still kept interesting. This is due to the great charm to the game via graphics, design, music and a nice variation of gameplay modes. Easily recommendable to any casual gamer, and for all you hardcore gamers out there who shun simple games, still check out Guerilla Bob: you might be surprised how much you end up liking it!