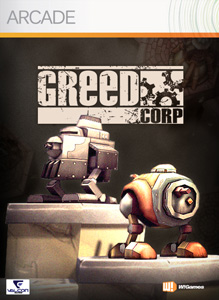 “Why share when you can have it all? Greed Corp is an online multiplayer strategy game in which you battle for dominance over a world once rich in resources. In order to prevail, exhaust all the remaining resources to build an army, and then use the depleted collapsing terrain to your advantage. An extensive campaign mode and multiple unlockables prepare you to take the battle online. Will you defend your territory or sacrifice it to keep it out of enemy hands? Manage the finite available resources to build your army and use the unique collapsing terrain mechanic to your advantage.” [Via Xbox.com]

The campaign has 4 different stories from 4 different perspectives, but the overall story is that you are trying to keep all the land for yourself. Other than that, there isn’t really much of a story. Does the game of Risk have a story? No, you just want to conquer the world. 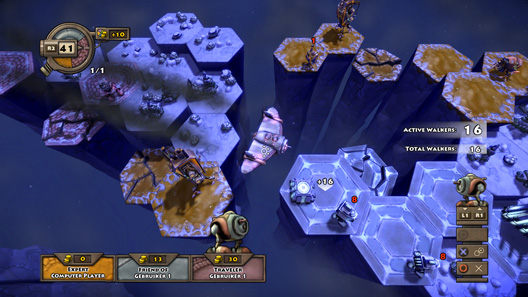 Greed Corp is a very interesting game. Its main focus is on turn based strategy and I am going to assume that everyone knows what that is. If not then go here. The aspect that sets this game apart from other strategy games is the “Don’t Break The Ice” feel, I included a link for the people out there who don’t know what “Don’t Break The Ice” is (I asked around, and a lot of people have never heard of the game).

Like most strategy game, you need resources to build buildings or units. To get these resources you must use harvesters. Harvesters slowly break apart the land that you are on. So as turns go by, the harvesters continue to break the land. The height of the land determines how many turns are left before that piece of land will completely disappear. A cracked piece of land only has one more turn before disappearing.

This adds more strategy since you need land to make armies and move around, but you must destroy land in order to make money to build the units. How much land are you willing to destroy? I have played a game where the people had to start using air transports in order to get to each other, because each player only had 3-4 blocks of land they were based on.

Units can pretty much move to any piece of land that you own and is connected to the current land by any number of other lands that you own; however, you must be adjacent to a spot in order to go into the spot that you don’t own. The only exception to this rule is when using a flying transportation vehicle, you can land what you are flying anywhere, but if the enemy can overpower you, you will just lose those units.

The video pretty much shows everything I just talk about, and it’s funny as well! Enjoy the Greed Corp Launch Trailer

The soundtrack is comprised of classical sounding music. But is not a huge focus within the game. The sound effects are the main focus. Everything makes some sort of noise that signifies that it has done something.

Such a huge focus was put into the sound effects that each of the 4 teams has separate sound effects. If you wanted to, you could look away from the TV and know exactly what your opponent moved, built, or added. Only thing you couldn’t tell is where they moved to.

The achievements are pretty straight forward, the first 4 are based off of the campaign, these rest can be gotten in any way.

The combination of real time strategy and Don’t Break the Ice leads to a very unique strategy game. The strategy no longer depends on your units alone, but now also on what land you destroy to build those units. Greed Corp is a new strategic experience that is welcomed to the strategy genre. I give Greed Corp 8 Capsules out of 10.