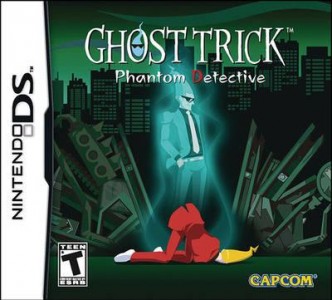 From the mind behind the famous “Ace Attorney” series, Shu Takumi, comes a brand new mystery solving puzzle title by the name of Ghost Trick: Phantom Detective. This title puts you in control of Sissel, the game’s main protagonist, who has been murdered and now must use his spirit body to possess objects for the means of travel to gather clues, find out who his killer is, and why he was killed off to start with. With complete touch control thanks to the Nintendo DS’ touch-screen, Ghost Trick is out to possess players in this brand new mystery. How does it stand up? Here is my review for Ghost Trick: Phantom Detective. 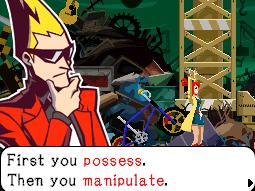 Story
There are a ton of mystery titles on the Nintendo DS, and while Ghost Trick’s story does fall into that genre, it completely stood out as original and a bit refreshing to myself. As I mentioned, you start the game off as a freshly dead Sissel, who soon learns that he has been murdered and has to find out who killed him off. There is only one problem though, Sissel has no memory of anything and must find out how he died before morning comes or he will disappear forever. On the way, Sissel soon discovers he can perform “Ghost Tricks” where is able to possess inanimate objects as well as turn back time for up to four minutes. With the assassins still at large, killing off certain targets one by one, Sissel sets out to use his new found powers to rewind time and save each victim as well as gather more valuable information for his own mystery along the way.

This may sound a tad typical for today’s standards plot wise, but it isn’t the main plot isn’t where Ghost Trick truly shines. Each character you meet within the game is rich in personality. That also includes Sissel himself who comes across as a bit cocky yet likable lead for the game with his tall hair-do and dashing red suit. As you progress in the story, you set out to save different characters over time and there is a ton of dialogue to read as you go through the game. That isn’t a problem though as all of the interaction between characters is brilliant due to some clever and humorous writing that made it impossible to ignore the story’s progression. Things like this make going through the game easy as half the fun of Ghost Trick is finding new and interesting people along the way. 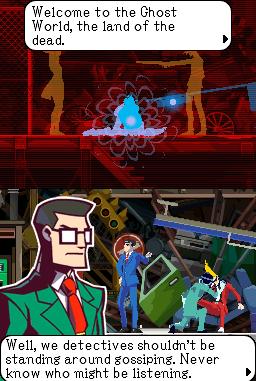 The game is divided into a chapter-based level format and as you progress there are plenty of interesting twists along the way. You would think with a game based around a topic such as death that the story would be a bit dark, but while the game does have some dark moments, it still maintains a positive and fun vibe the whole way through due to the humor and odd, yet truly interesting stories from everyone involved among the main plot.

Gameplay
While the setting in Ghost Trick is easy to become immersed in due to all of the colorful cast of characters, the odd take on gameplay is just as intriguing. The first thing you should know is that there are two worlds in Ghost Trick, a ghost world, and the land of the living. In the land of the living, time moves just as it should and ghost world lets time set still. These two worlds are the key to the way the game is played and you will find yourself switching between the two many times during one puzzle or “death” for that matter.

Since Sissel is dead, his only means of travel is by possessing certain objects in the ghost world. Sissel can only go a certain distance between objects though and only possess those items with a blue core, so you must use your stylus to drag his spirit from item to item along the environment. Certain items you will come across have an option to be manipulated, which is displayed on the top screen. For instance, you can open a fridge, turn appliances and lights on and off, move gates and ropes, and so on. This is done usually to make Sissel able to reach the next object, but it can also be used to interact with the characters in the environment. 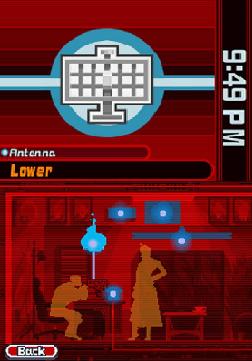 When you must rewind time to save a character, you must use the object manipulation to create a distraction or just flat out stop the assassin from killing their target. Jumping from one object to the next, each item you interact with can change up the whole scenario as simply turning on a light or flipping a switch can change the fate of a fallen character, which is of course the main objective throughout the game. Once you are in an item, flip the world back to the land of the living, manipulate it, then watch the results. Timing is also mixed into this equation as certain items in the environments must be possessed while moving to get you to your destination so a watchful eye is needed at all times. It isn’t as easy as it sounds though as the true challenge in the game is trial and error, but thankfully the game lets you go back and gives you hints to provide some better insight on what exactly needs to be done to stop certain actions from happening. This whole strategy can really test your observation skills as Ghost Trick’s puzzles are completely environment based and the slightest detail could be the pivotal piece into completing a goal.

Sissel can talk to any dead body that has a yellow core to gather clues for the overall mystery so interaction is another large part of gameplay. While you can’t just possess bodies and walk around, you can speak to the fallen victim’s spirit to gather clues on how to prevent their death from happening. After you gather all the information you need from one area, Sissel can get to the next via a telephone line, making area jumping easy (as long as you have the correct phone number). 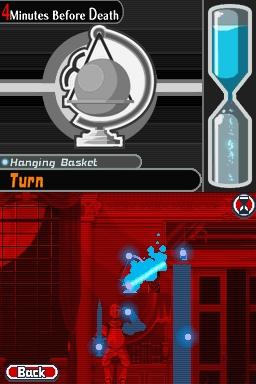 As a whole, each goal for whatever objective you have is pretty straight-forward and a bit linear, but it is so much fun to watch how the characters interact with all of your actions while manipulating objects that it never feels like a chore. The unique gameplay ties in perfectly with the quirky yet interesting plot and makes Ghost Trick hard to put down until it is finished. After you beat the game, there isn’t a whole lot left to do, but I can easily say I would mind spending another 10 hours or so going through this lively world to see it all again.

Graphics/Audio
The character models are the first thing that stands out in Ghost Trick as each are bright and vivid, boasting a cell-shaded cartoon-ish charm. Each character’s movement completely portrays their personality, and the animations brilliantly set the scene for each area you happen to be snooping for clues in. While you are conversing with characters, close up shots are used which give you a better look at the character’s expressions and the design work all came across great by the visual emotions that fit into the dialogue. Of course since the environment is key to solving these mysteries within the game, it is very important that each item looks the part, and thankfully every area is fully detailed to accomplish this. 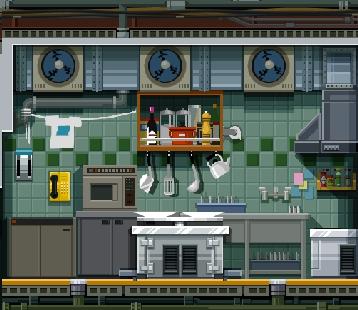 The music in Ghost Trick is all scored well enough, but some tracks are more memorable than others. Certain characters actually use their own tracks to better fit with their flamboyant or stiff personality, tying the whole experience together. Sound effects are also used to portray settings and expressions which was yet another home run in the game.

Overall
Ghost Trick has a unique concept and plot which tied together brilliantly bringing the DS something it needed, a refreshing gaming experience. The characters in Ghost Trick are worth the price of the title alone as from baffled detectives to a fiesty Pomeranian, you will find it hard to put down due to the heavy and rewarding interaction from one chapter to the next. Ghost Trick is a title that not only does a fantastic job with gameplay, but also created a new Mascot who is bound to etch his name among the greats such as Phoenix Wright and Professor Layton. Do yourself a favor and don’t let this mystery go unsolved.

I Give Ghost Trick Phantom Detective: