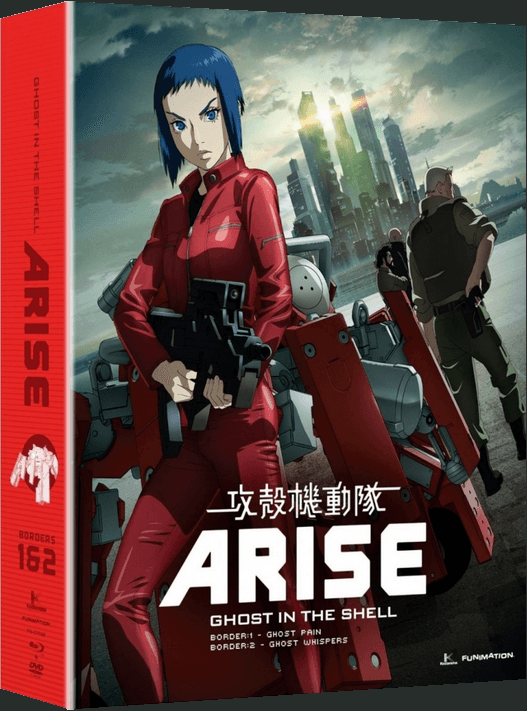 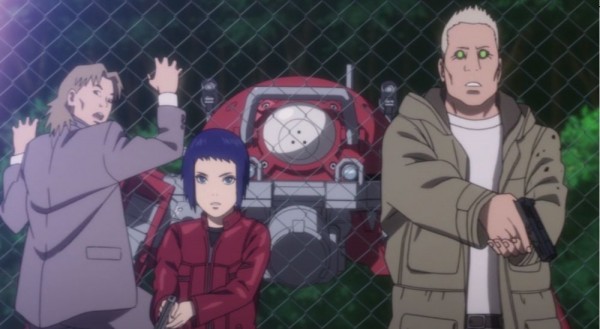 Ghost in the Shell: Arise is an OVA series telling the story of how Motoko Kusanagi, a military specialist cyborg, came to work for Public Security. The series is heavy on cyberpunk themes with a focus on transhumanism and what it means to be human. These episodes take place before the original manga and are a prequel of sorts. The story starts off before Major Kusanagi leaves the military, and the circumstances thereof. This set is a four-disc set of two OVA’s, with each OVA on two discs, Blu-Ray and DVD. We have also reviewed the first OVA, Ghost Pain, in it’s Australian release here. 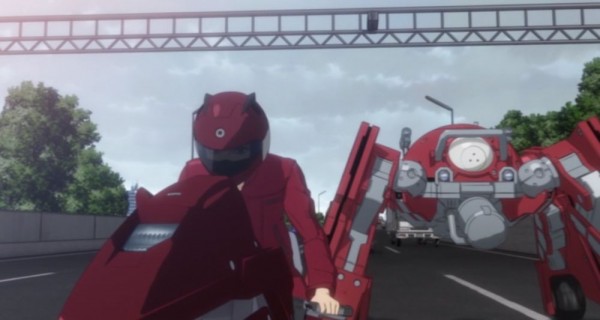 The story of Ghost in the Shell: Arise follows the overall series main protagonist army Major Motoko Kusanagi. In this iteration of the series we follow a young Katsuragi still working for the army in an investigative role. The ensemble cast of the main series hasn’t been assembled at the start of this OVA series, though that quickly changes as they all run into each other. The cast begins to fall into place during the investigation which takes place in the first OVA as an investigation brings them all together. This is more or less completed in the second OVA by the ending.

The actual stories of Arise are thrillers, but ultimately somewhat formulaic. In the first OVA Ghost Pain, the story follows a number of different individuals investigating the murder of a member of the military. Batou and Kusanagi investigate as well as a city detective. The plot goes through numerous twists and turns causing characters to question themselves and motives. As a cyberpunk story we’re led to question what is real and what is fake when all you have is a digital memory that can be hacked and altered. Ultimately the story brings everything full circle, but to me it was a bit of a letdown. It seems to have been needlessly complex in parts where simplicity would have sufficed. 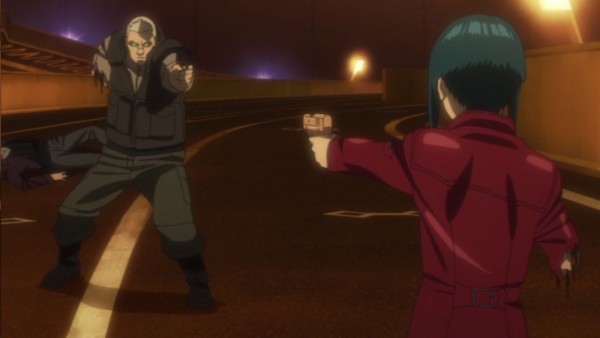 We see the same issue in the second story. In Ghost Whispers, the Major is investigating another crime, only this one is in progress. This episode of Arise features much more action, and to me felt like a better story. The first OVA struggled to get it’s pace down as it got hampered by the constant introduction of all the characters which the show needs us to meet. Ghost Whispers is able to trim much of that out and focus on the crime in progress which is a large scale hacking event that freezes the city in it’s tracks. Ultimately the hacking attack leads us again to question what is real and fake, which is somewhat disappointing that they would go for such similar storytelling two episodes in a row.

In these two OVA’s Arise  is still struggling to find it’s place and figure out what it wants to bring the viewer. The struggle of Kusanagi and the struggle to define what is real and what isn’t is done well. However, the lack of strong narrative to bind both OVA’s together is a flaw. It’s nice that the general thematic elements are present in both, but I felt that in Ghost Whispers this could have been handled better. If you slow down and stop trying to look for the deeper cyberpunk themes and questions of morality, it’s still a solid pair of OVA’s, though perhaps a bit slow for today’s thrill-seeking viewer. Ultimately I enjoyed the military complex themes and ideas, as well as Kusanagi’s struggle to find her place. 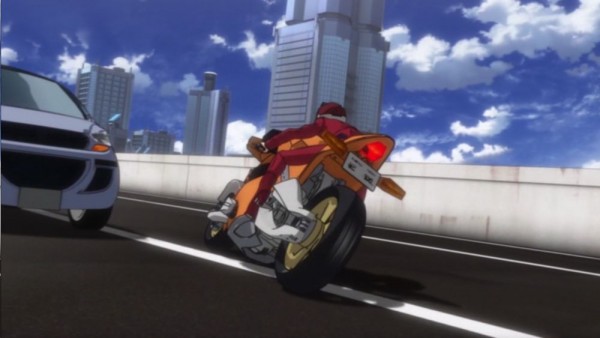 As with most Production I.G. works, the visuals of Ghost in the Shell: Arise are stunning. The title was released in Japan in theaters prior to it’s Blu-Ray release. Generally OVA’s tend to have much more put into anime, and watching Ghost in the Shell: Arise on Blu-Ray clearly demonstrates this. This isn’t to say that the DVD copy’s are bad, but they’re in no way as crisp and clear. Some parts of the OVA were a bit of a letdown in visual quality, but overall the artwork is excellent. Best of all are the action scenes, with crisp fluid movements. 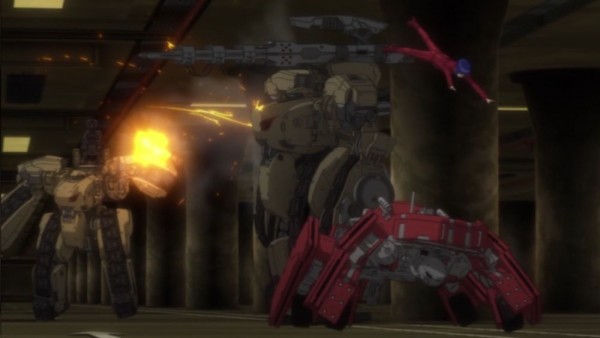 The majority of character designs and environment are beautifully done, with the environment feeling like a near-future metropolis. The mixture of scenes such as Motoko visiting a robotic hospital to viewing dirty back alley’s evokes the aesthetic of Ridley Scott’s Blade Runner. As is becoming typical in modern anime CG is mixed in with the more traditional artwork. It’s well-done in Ghost in the Shell: Arise, and the CG doesn’t feel intrusive to me. 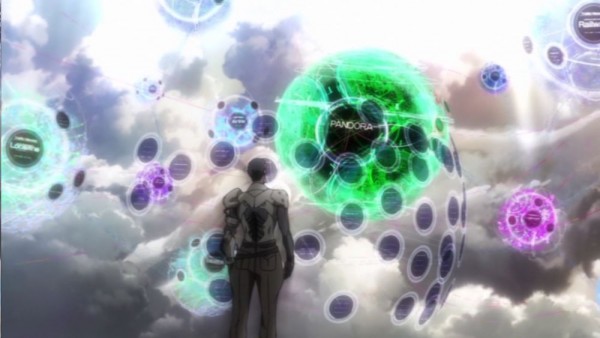 I don’t feel like these are movie quality OVA’s, but they’re still well-executed and drawn. I’d like to make a special note of the cyberspace scenes. I found the different natures and designs of different cyberspace areas to be quite beautifully done. Of note is the hacking of the primary antagonist in Ghost Whispers. I found his layered world and different areas to be excellently done and the visualization of his hacking of the city was quite nice.

The audio may come as a bit of a shock to long time Ghost in the Shell fans. Both the English and Japanese voice actors were recast for the series, bringing on new actors in place of longtime favorites. Regardless, the actors do a fine job bringing the characters to life on the screen. Personally while I don’t prefer English dubs the voice cast assembled by Funimation was well chosen. 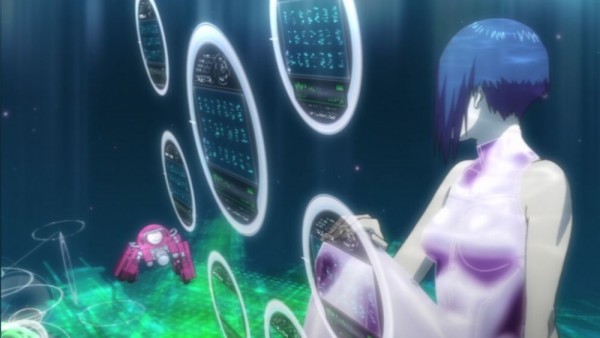 The music for the OVA’s is excellent. It’s very well composed, and I found myself enjoying all the various background tracks. The music during the fights is exceptional, and well worth listening to even beyond it’s role as background music. Both audio tracks were done in 5.1 surround, which is nice for people who have it and not really a detraction if you don’t.

For Ghost in the Shell Arise the extra’s are a bit of a letdown. While opening the extras menu gives the viewer a vast number of options many are ultimately pointless. The large majority are trailers and teasers as well as promotional videos. There are a couple of shorts which were nice to include, as well as a commentary track from the English cast and crew for Ghost Whispers. Additionally there is a featurette of the promotion for Ghost in the Shell: Arise from Anime Expo 2013. There are a couple of shorts from the production crew at I.G. talking about the film for the premieres as well. On this release as far as content goes, you don’t get too much beyond the actual OVA’s themselves. 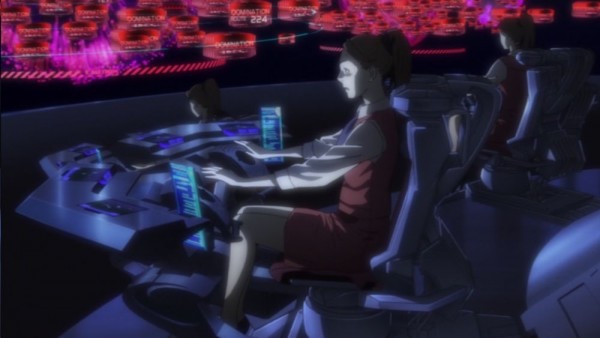