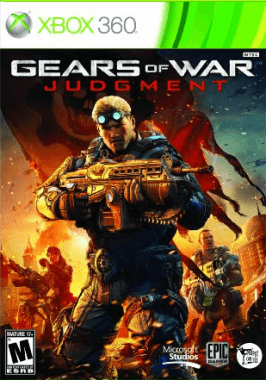 The Gears of War franchise has been around since 2006.In the last seven years, we’ve witnessed the epic struggle of a select few COGs as they fought, not only for their friends and family, but for the fate of the entire human race. Though the original trilogy has drawn to a close, there is still plenty of room left to discover how those heroes became who we’ve come to know. Gears of War: Judgment tells the story of Baird, Cole, and the rest of Kilo squad when the fight was brought to their doorstep. How does Judgment stack up? Does it earn its revered place in the Museum of Military Glory or should it be sentenced to solitary confinement for the rest of its days? Let’s find out. Judgment focuses on the story of Damon Baird. When the game first opens, we witness Baird, Cole, and the rest of Kilo Squad as they disembark from a helicopter, hands bound in blue, glowing cuffs. As the city of Halvo Bay burns around them, they’re taken before a tribunal and ordered to give their accounts of what happened in the hours leading up to their current state of bondage.

Players familiar with Gears games will quickly notice the streamlined inventory system. Instead of carrying two rifles, a pistol, and a grenade, all which required the D-pad to access, you now carry two firearms that you switch between with the ‘Y’ button. Grenades are now dedicated to the left bumper as well. This helps inject the pace and feel of combat with a much needed boost, keeping you in the action more instead of forcing you to stop, switch weapons, and continue.

Kilo squad is an eclectic troop. Damon Baird leads Kilo squad, sans the wisecracking attitude he was known for throughout the franchise’s history. Augustus Cole, Thrashball all-star, is present but he’s far less bombastic than the Cole Train we’ve all come to love. The two remaining members are Onyx Guard cadet Sofio Hendrik and Private Garron Paduk, a former UIR officer during the Pendulum Wars. The only real standout in the bunch is Paduk, who often clashes with his teammates due to his history as an enemy of the COG. The story is told over the course of several chapters, each broken into a series of missions. The idea that each chapter represents the testimony of a different member of Kilo squad is a fantastic storytelling tool. Playing through a chapter from the eyes of a different squad member functionally changes nothing, but seeing events through the eyes of the witness really lends itself well to the immersion of the story.

The mission structure of Judgment recharges and refreshes the franchise, truly setting it apart as a positive example of how to handle story moving forward. Instead of barreling your way from the beginning of a long mission to the end with multiple checkpoints in between, each mission focuses around a single battle or encounter, usually with a single checkpoint around halfway through. They also offer a good bit of variety, giving you the occasional wave-based defense mission or escort mission instead of perpetually running from A to B. They usually only take 10-15 minutes to complete, as well, giving players the freedom to play for just a little while and still feel like they’ve completed something significant.

Another significant feature added to Judgment is the introduction of “Declassified” missions. Represented by the classic “blood omen” (a COG symbol with a skull inside) spray-painted somewhere near a mission’s starting point, these present the player with a chance to earn some bonus points and give the unwritten account of what actually happened in a certain situation. These place extra constraints on the mission (such as “pistols only” or “enemies also attack from behind”) that increase the difficulty but offer a faster rate for earning the maximum rating on each mission. Judgment also introduces the “Smart Spawn System.” Much like the A.I. director in Left 4 Dead, the Smart Spawn System generates enemy spawn layout on the fly by looking at your performance and placement within a room. This will allow players to replay missions and experience a different encounter than they had the last time. It helps keep you on your toes and prevents things from being too predictable.

Multiplayer has traditionally been a huge part of the Gears experience, and that’s no different with Judgment. From the moment you enter the game, everything is set up to accommodate playing with friends, whether the campaign, competitive, or cooperative game modes.

Judgment offers four different competitive game modes to quell your craving for some online action. Overrun is a class-based mode that pits humans tasked with defending a point against Locust who must take take a series of points to win. This game type grants the locust access to different creatures, just like Gears of War 3‘s Beast Mode. This is arguably the best addition to Judgment‘s multiplayer and gives you a welcome break from the standard game types you’ve played so many times. Domination puts two teams of humans, red versus blue, into a level with three flags. Players must capture and hold these flags to earn points until the target score is reached. This can make for some hectic experiences as teams will swarm around, trying to capture and hold everything at once. The two remaining game modes are the standard Team Deathmatch and Free-For-All modes. The only truly noticeable difference between Judgment and prior Gears games is the complete absence of the Locust in Team Deathmatch and Domination.

One glaring omission from Judgment is the absence of Horde Mode, which allowed players to set up fortifications, taking on up to 50 waves of enemies with friends. Regarded as one of the franchise’s most well loved modes, it’s a little baffling that you would remove it. In its stead is the new Survival game mode, which cribs from the Overrun competitive mode. It sets four players up as Humans defending wave after wave of Locust as they try to reach a series of holes. It’s fun, but it feels lazily rehashed and is certainly no suitable substitute for Horde Mode. While it remains true to its predecessors, there are a few glaring issues with multiplayer design choices in Judgment. The game shipped with only four maps available to play in each mode. This feels woefully lacking and quickly feels unfair – especially when looking at the plan for upcoming DLC, which will give three maps per pack to gamers willing to shell out more money.

Microtransactions come more to the forefront in Gears of War: Judgment, too. Not only can you purchase new weapon and character skins, but you can also purchase Double XP Boosts that will last for a set number of games, effectively letting players pay to rank up faster online. This wouldn’t be an issue if the retail game didn’t feel like it were so lacking on content already. Judgment is easily the best looking game in the series. Several of the characters we’ve known for years have been overhauled to make them look both younger and cleaner. Though the game ultimately sticks to the gritty shades-of-brown motif it’s so well known for, the developers have done a good job showing that Unreal Engine 3 still has some real power.

The sound in the game is serviceable but nothing fantastic. Sound effects are reused from previous games. That’s not necessarily a bad thing, but there’s nothing fresh here. The voice work is well delivered, but apart from “gruff” and “angry”, very little emotion is ever conveyed. The tracks do well conveying a sense of how ominous the situation is, but every track sounds virtually the same and, unlike its contemporaries (such as Halo), no major theme can be synonymous with Gears of War: Judgment.

Overall, Gears of War: Judgment is a fantastic game. With one of the most solid, interesting campaigns in a third person shooter this generation, a few interesting new enemies and weapons, and some innovative systems for the campaign, Judgment earns its place in the Gears universe. It’s unfortunate that there were some missed steps with the multiplayer, causing it to feel as though it lacks map variety. At its core, there is still a fantastic multiplayer game with the potential for long legs. Though players familiar with the Gears franchise that aren’t interested in past titles will find nothing to change their minds here, Gears fans and folks looking for a great shooter should absolutely pick up this game.