Gangstar Vegas is the latest iteration of the longstanding Gangstar franchise on iOS. The series returns stateside, taking place in Sin City, aka Las Vegas. The game stars Jason Malone, a man who tried to escape his past life of crime by moving to Las Vegas and becoming an MMA fighter. Instead, he is thrust right back into the seedy underworld after a rigged fight goes wrong.

Jason Malone is instructed by the game’s villain, Frank Veliano, to take a dive in the fourth round of his fight. Instead, he accidentally knocks out his opponent in the third round. Now a man with a price on his head, Jason turns to Vera, the owner of the local strip club and the widow of Frank’s former boss. Together with Vera’s hardnosed accountant Karen, the three spark a turf war with Frank that will change the balance of power in Vegas. 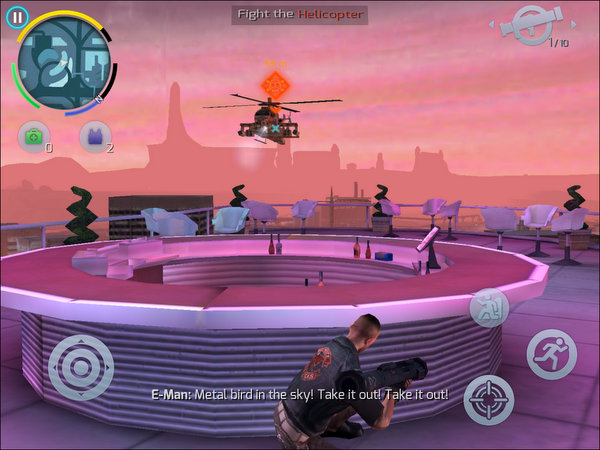 Gangstar Vegas’ writing is possibly the most impressive thing about the game. The plot line is interesting, well written, dramatic, and funny. Although a few genre tropes are used in the plotline, they are mixed in well with plot twists and turns. The plot moves at a quick pace, though there is a spot or two where I felt it jumped too fast. Games that deal with grittier topics like Gangstar Vegas does often falls victim of overusing profanity to the point it feels forced. Profanity and sexual content is used liberally in the script, but never feels overused or out of place. The characters are quirky and genuinely likeable. There are a few moments where the Jason and Karen say something so corny that I cringed, but overall Gangstar Vegas delivers a solid story, great characters, and excellent writing.

Gangstar Vegas is easily one of the largest open world games on iOS. Players can traverse Las Vegas and the surrounding desert by car, motorcycle, boat, plane, helicopter, or by foot. For those who need a little more bang in their lives, there are 21 weapons to equip along with a full upgrade system. Jason is also able to purchase a wide variety of clothing, including the bare chested MMA fighter look to the masked bank robber. 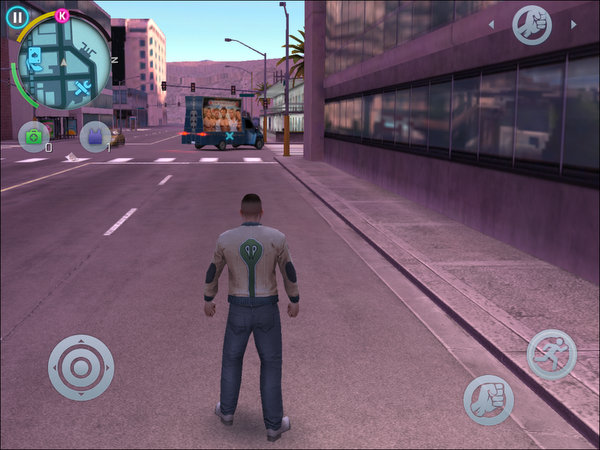 There are plenty of things to do in Vegas. There is a lengthy five chapter long story along with races, rampage missions, MMA fights, gambling games, and hidden collectables scattered around the city to find. Many of these side missions are have leaderboards, further extending the replayability of the game. There is definitely enough content in Gangstar Vegas to justify the hefty $6.99 USD price tag.

The game’s controls vary depending on the type of transportation Jason is using. For land and water based vehicles, players can choose between gyroscopic or touch screen controls. On foot and in the air, Jason must use the touch screen controls. I found the driving and flying controls to be spot on. The controls were responsive and accurate. However, the foot and boat controls to be painfully clumsy. Positioning Jason behind the appropriate cover in the middle of a gun fight was extremely difficult. Moving Jason out of cover often required standing still and out of cover for a few seconds while I bumbled around trying to get him over the piece of cover and safely behind the next piece of cover. Although there is enough health and armour to soak the abuse, I found myself completely eschewing cover by the end of the game. It ended up being easier to walk around and fire, Terminator style, than to fuss and fiddle with the cover system.  The boat controls were even worse. Boats seemed to only understand two levels of turning in gyroscope mode, slight turn and quite literally driving sideways. The touch controls were unfortunately only marginally better, providing at least a visual clue on exactly how far the controls were turned relative to the boat’s turning. 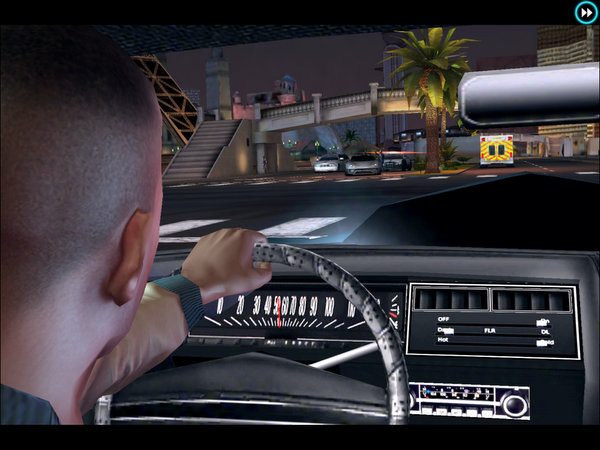 The gun play in Gangstar Vegas is well designed for the touch screen control. All weapons except the sniper rifles fire automatically by holding down the attack button. Players simple need to tap the desired target and open fire. If no target is selected, the game will automatically attempt to lock onto the closest available target. This system allows players to fire while on the move with ease. However, on the iPad there is a 8cm by 8cm dead zone on the bottom left corner reserved for movement controls. Attempting to tap on that area will move Jason instead of targeting the enemy. Thankfully enemies preferred taking pot shots from behind cover than making any real attempt to flank Jason in a gun fight. 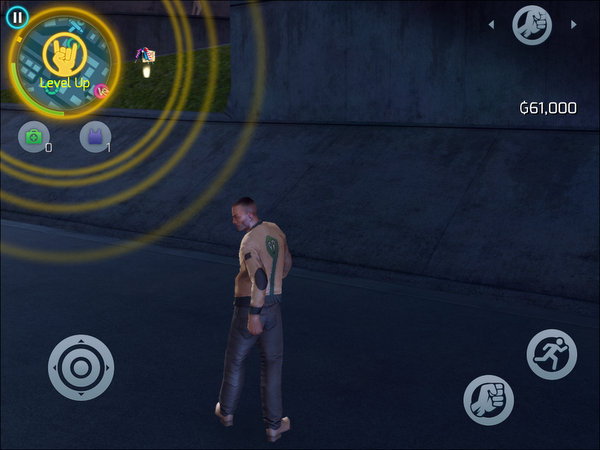 I enjoyed Gangstar Vegas’ property, upgrade and skills system. Properties around Vegas can be purchased to provide a steady income that can be collected after a certain period of time to augment income from completing missions, finding collectables, and bringing in cars to the chop shop. Completing missions also awards skill points that can be spent on a variety of skills, ranging from the traditional weapon and health bonuses to scavenger bonuses that provide better loot from fallen enemies. Occasionally, enemies will drop vehicle, weapon, and fashion items that can be traded in for more potent upgrades. Special VIP enemies randomly spawn in the world that are guaranteed to drop a lootable item, encouraging players to wander around.  Random loot boxes and keys are even rarer drops. The boxes provide players a chance to earn pre upgraded items based on the theme of the box. Keys can also be either purchased as an in app purchase and one is awarded for playing every day. Gangstar Vegas’ in app purchase system manages to stay unobtrusive, a rarity I am extremely thankful for. 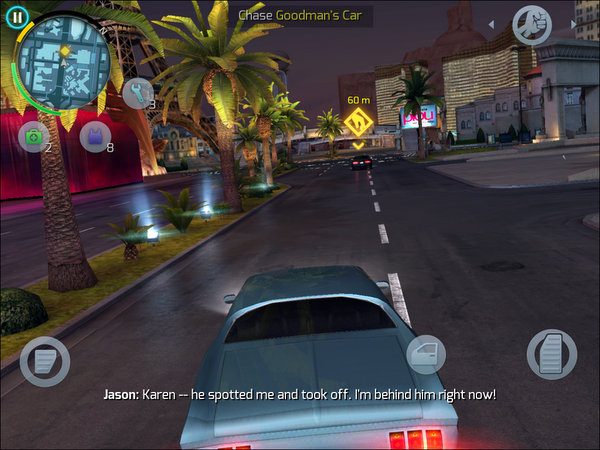 The travelling system in Gangstar Vegas is an example that should be followed by open world games. Players can simply click on the icon of a mission they wish to complete on the map and be instantly teleported to the starting area. This saves some long drives when completing a mission and discovering the next start point is literally across the map. Additionally, any property purchased can be used as a teleport time, further cutting down on travel time. In missions, vehicles can be delivered to a nearby spot for a small fee. This is handy since traffic is only dense in the downtown areas of the map. If Jason is stuck in the suburbs or the desert with no cash, he’s in for a long walk. 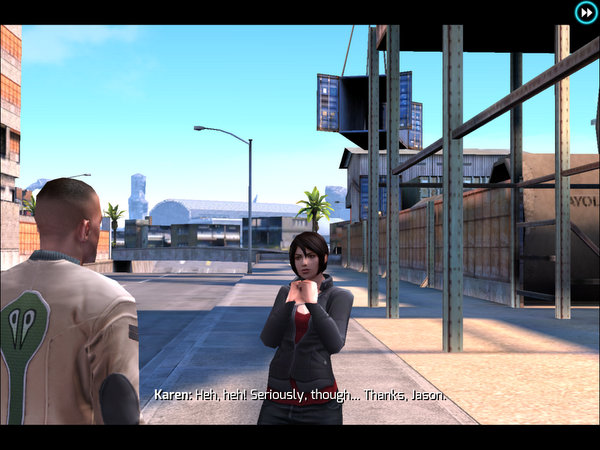 Gangstar Vegas is an impressive technical accomplishment. Considering the scope of Las Vegas and the level of life that walks the streets, models are detailed and animations are slick. This is definitely a game that taxes the graphic chip on iOS. Unfortunately, there is a bit of obvious texture and model popping. It is not too noticeable on foot as the most obvious sign is that at a distance, cars seem to almost float in the air. When they come close, wheels suddenly appear. The most noticeable is when Jason takes to the sky. There is a very obvious line usually near the bottom of the screen where the textures and models become sharper. I also noticed that not all of the cut scenes have animated mouths. Minor cuts scenes often have the models talking to each other with no movement of the mouths. 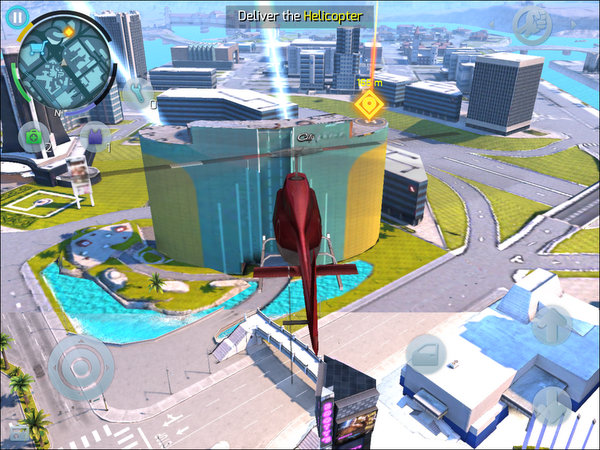 Gangstar Vegas is fully voice acted. The voice acting is excellent. I was particularly impressed with Frank, Vera, Karen, and E-man’s performances as I felt the actors did a fantastic job bringing life to their respective characters. Surprisingly, Jason had the weakest voice acting job, as often times I felt the delivery was rather flat. The sound effects were also excellent. The weapon sounds have plenty of oomph and variety while cars sounded appropriate to their type. Smaller dirt bikes provided a high pitch engine noise while muscle cars made a satisfyingly throaty noise. 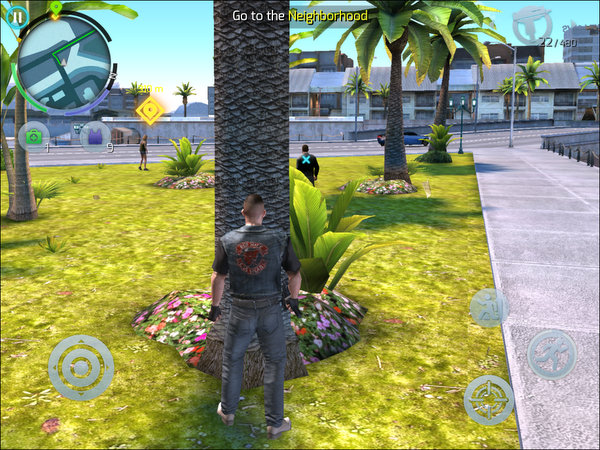 The soundtrack is always an important part of an open world game, and Gangstar Vegas delivers a lengthy soundtrack full of licensed artists. I was pleasantly surprised to find Skrillex’s Bangarang serves as the game’s theme song. There is also plenty of funny and quirky radio DJs and commercials to fill the airwaves between songs.

Gangstar Vegas is one of the better open world game on iTunes. It does struggle at times with clunky controls and obvious textural differences. However, the game also delivers a satisfying upgrade and loot system, a fantastic story, excellent voice acting, an incredibly large world, smartly designed gunplay, and an incredible amount of activities to complete. At $6.99, Gangstar Vegas is well worth the price.