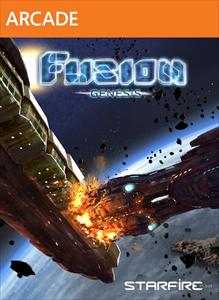 It’s not often developers from a blockbuster company such as Rare split off and settle down to make Indie games for XBLA, but that’s exactly what happened here. Fusion: Genesis, the first brain-child of Starfire Studios, is part twin-stick shooter, part role-playing game, and part MMO all at the same time, based in a quirky, self-referential science fiction universe.

If you think that’s a lot of genres to be packing into one game, you’re right; the ambition of this game is immense, the developers have really reached for the moon with this one. Has a pedigree in larger games given Fusion: Genesis the boost it needs, or does it all come crashing down? 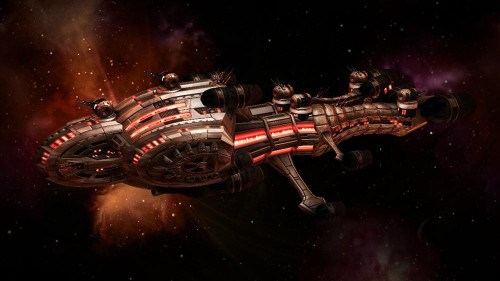 Fusion: Genesis starts players off in the not-so-glamorous shoes of a lab assistant to a researcher who’s discovered something big. As a tongue-in-cheek tutorial, where he tells you how dumb you are for needing help in the skills of basic navigation, progresses his discovery is made evident. He’s created a special Sentient, a little AI robot that accompanies your ship wherever you go (think Navi from Zelda, but actually helpful and minus the “hey, listen!”s). But there are a lot of people interested in this little piece of tech, and the researcher is killed while you escape with a crappy little ship, the sentient at your side.

You’re then told by Judah, a guy who looks remarkably like Jim Raynor, that you and that sentient have got work to do to help save the galaxy’s warring factions from the hidden evil menace, the Dark Legion. Sound familiar?

The catch is you’re going to need a better ship than your hunk of junk, so you’ll need to join one of the factions and ascend their ranks in order to upgrade to a war vessel you can be proud of. These factions are your typical sci fi stereotypes: Matriarchal zealots, a human Dominion, mercenaries, peace-keepers, and enforcers of the law. Each of these has its own unique storyline that runs alongside the events of the main story.

By this stage, you’re probably thinking how the game expects to be taken seriously when it riffs off so many genre tropes. Well, it doesn’t. The game’s quirky narrative and exposition makes it very clear that the plot is more to create a familiar envrionment in which to make constant, often obscure, references to the classics of the science fiction genre. And in that respect, the game succeeds. Never before have I felt like Han Solo racing to unite the galaxy against the Reapers while the Zerg and the Brotherhood of Nod hound me the whole way. The game brings out your favorite science fiction memories and it’s to be tremendously commended for that. 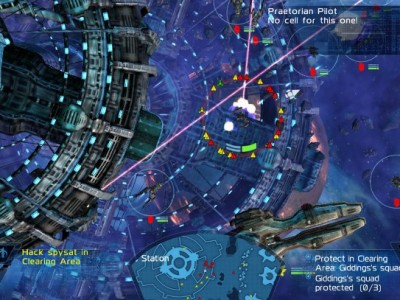 The game controls like your average twin-stick shooter, but the mechanics behind it go far deeper. When you level up you can upgrade your pilot stats, which affects how effective your ship is at damage or defence or what skills you unlock. On top of that, you can feed your sentient crystals so that it too can upgrade its statistics and abilities (though the game never really outlines what it is those crystals do). And on top of that, when your Faction level increases you can buy newer, more powerful ships which can then be upgraded with newer, more powerful weapons. The catch is, the larger your ship, the slower it is. So though large battleships can carry more cargo and use more weapons, they maneuver at preposterously slow rates. Piloting them made me feel like I was piloting a pirate ship agaisnt the wind. Though this unmaneuvarability is rewarded when you finally get to a combat zone and blast away with a ridiculous amount of weaponry and annhilate everything in sight.

The number of things to upgrade mean that the game is sublimely addictive, despite the fact that by the time you’re halfway to the level cap the game starts to get extremely repetitive; quests are even named “More Patrols” or “Lost Again”.

The repetitiveness is alleviated somewhat by the short length of individual missions, but it’s also hindered by the fact that to unlock new story missions, you have to grind through side quests which have little personality to them. Much like an MMO, you’re given a wall of quest text, which you’ll probably ignore, and then you’re off to do something you’ve already done twenty times.

To further the MMO feel, several players can jump in and out of your game world, and if you have PvP on, players from opposing factions can jump in and try to harass you. Each zone has enemies and resources that respawn over time, and as you level up and explore zones, you’ll unlock new zones with different asthetic looks and quests. There’s also PvP battlegrounds in which the Dominion and Revenant factions of the game fight to destory one another’s battleships, and can be helped or hindered by players from each of the factions. A survival type mode is also included, where players can team up to defend a base from Dark Legion attackers. Like everything else in the game, performing these modes gives you experience to upgrade pretty much everything you’d care to upgrade.

The mix of genres works well in favour of Fusion: Genesis, but it also succumbs to the major flaws of most those genres: repetitive like MMOs, difficult to understand mechanics like RPGs, and with the simplistic combat of twin-stick shooters. 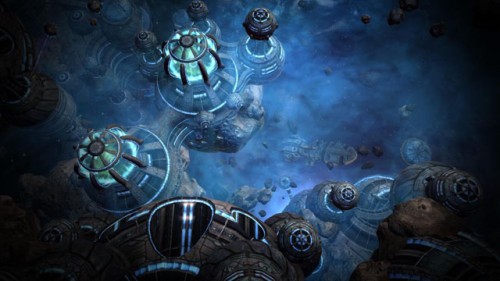 The game’s soundtrack is wonderful. The musical themes of the game provide a mood for every space setting imaginable, whether it’s the haunting sound of empty space, the wonder of exploring a massive space station, or the intensity of a battle anthem while in a dog fight. Much like the game’s story, the music will remind you of Star Wars, Starcraft, and all those space epics you’ve experienced in the past.

In terms of sound effects, lasers sound like lasers, and missiles sound like missiles. It’s not sound design you’ll be telling all your friends about, but it does a decent enough job of making you feel in the moment.

Fusion: Genesis is a looker. With a variety of environments and locations all beautifully rendered from the top-down point of view, the game really sparkles with it’s expansive backgrounds and the sheer amount of ships it can put on the screen. You’ll battle dozens of enemies while fighting amongst frozen wastes or in orbit over lava-covered planets. The larger, dreadnought-type ships definitely steal the show however. When you see a ship that takes half the screen, spitting lasers, missiles, and beam-weapons all over, it’s truly a sight to behold. 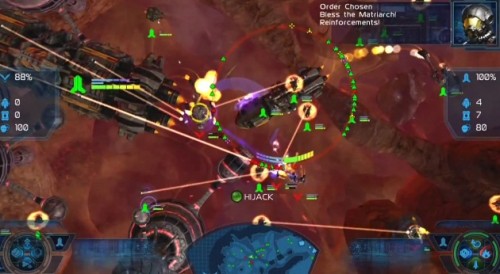 Starfire Studios set their sights high with Fusion: Genesis, attempting a game that can only be best described as an almost MMO, RPG, twin-stick shooter. The impressive thing is that they almost succeed, but the pitfalls of repetitve quests become the game’s major detractor. I’ve saved a Revenant scout named Sellen a good five times now, and she’s still getting lost. Sure, she gets lost in different locations, but that doesn’t really change the gameplay.

While it looks and sounds great, and the gameplay reaches addictiveness levels of Diablo, the game suffers through the shameful amount of mission variety. I could have done with one thing fewer to upgrade if it meant every mission in the game had a unique twist. Sadly, you’ll find your attention waning at about level 20, and the game struggles to recapture it from then on.

Regardless, this is a wonderful first effort from Starfire, and even if you don’t finish the game, you’ll get hours of addictive fun out of it, and a great nostalgia trip is just icing on the cake.