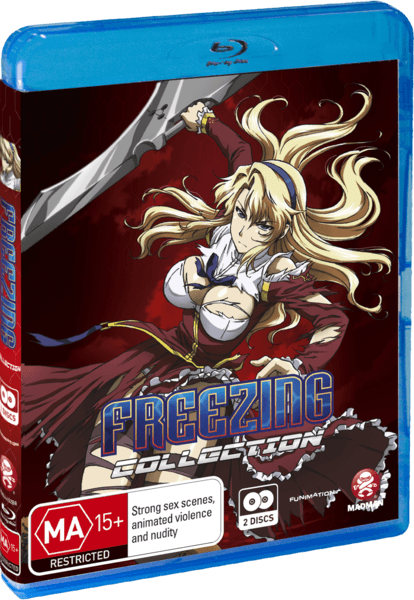 Overview:
Usually whenever one thinks about an anime that is action packed with characters battling against one another often or against other foes they begin to think about the shōnen genre as it tends to be the most popular amongst younger anime viewers. However there is also another type of action-based anime that focuses around an entirely different cast of fighters, a female based cast.

Over the last few years many anime have been released which blend high amounts of action, an attractively drawn female cast and plenty of fan service. This usually happens during battles where clothes are ripped and breasts are exposed. The most recent series of this type to make its way to North America is Freezing from FUNimation. While fan service is great, is there a decent storyline hidden beneath all of the cleavage and panty shots?

Story:
Sometime in the future, Earth has come under attack by creatures from another dimension called Nova. These creatures are completely unstoppable by normal means and the only way that humans have been able to fight them off is through the powers of young women who possess a special acceptance to genetic modifications allowing them to be implanted with Stigmata. These Stigmata provide them with inhuman levels of strength, the ability to summon a weapon at will and high levels of durability. 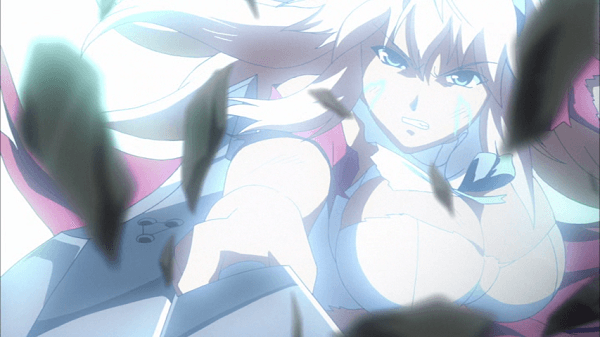 Each of these Pandora must find and choose a male partner to become their Limiter, who can create a special “Freezing” field that not only slows down the enemy but also counteracts the Nova’s own freezing field, allowing the Pandoras to fight on equal terms with these unstoppable creatures. The only thing is, when a Pandora and Limiter work together, their emotions and minds are shared with one another, creating a very personal connection between two bound people.

The story of Freezing follows a young man named Aoi Kazuya whose sister died during a battle against the last Nova to set foot on Earth. Upon joining a special academy for Pandoras and Limiters, he finds himself drawn to one of the most mysterious and powerful Pandoras in the entire school, Satellizer el Bridget… also known as “The Untouchable Queen” thanks to her cold attitude and outrage whenever someone even tries to touch her. 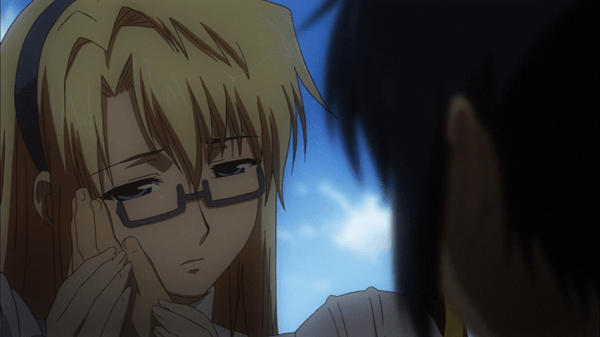 After a severe misunderstanding, Kazuya slowly begins to work his way through the thick shell Satellizer has built around her heart, though along the way they must overcome fellow classmates and seniors who find Satellizer’s arrogance and power a threat to the standard school structure.

Through their struggles Kazuya wishes to become Satellizer’s Limiter as he not only feels close to her, but he is also the only one whose touch doesn’t disgust Satellizer. Can these two work through their emotions and deal with their fellow classmates while the threat of the Nova hangs over everyone’s heads? 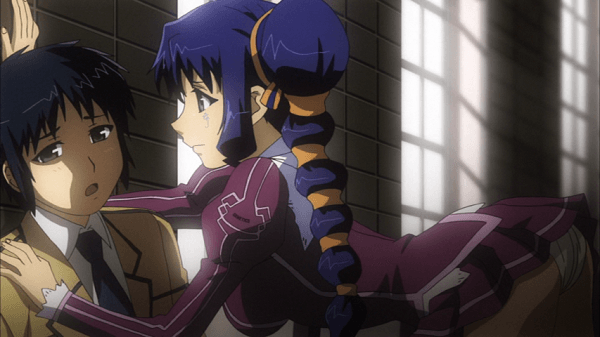 One of the biggest draws for Freezing’s storyline is the fact that the cold ice-queen that is Satellizer presents a perfect opportunity for character development. While viewers are first shown a character incapable of feelings and by all appearances a heartless killing machine, as her shell begins to crack, her emotions are available for everyone to see. With the assistance of her own dark backstory driving her forward, she stands up again and again no matter what the obstacle is.

Outside of Satellizer, the rest of the cast is well rounded and viewers are quickly introduced to a love rival who isn’t shy about trying to have Kazuya become her Limiter. This only helps expose her emotions further, but does lead to your standard misunderstandings which grow to be tiresome in a series like Freezing where there are heavy bouts of action where characters can literally have an arm torn off of their body. 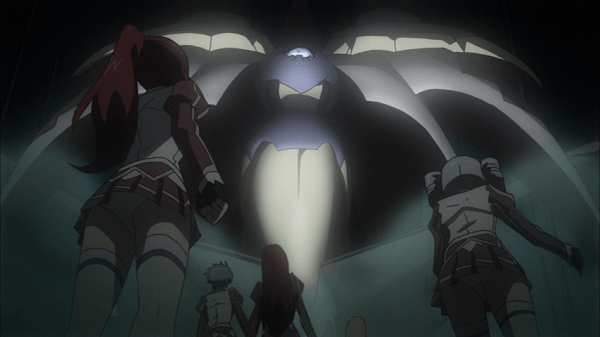 The only issue with the storyline is that perhaps too much time is spent trying to work on the main two characters as far as character development goes, since most of the other members of the cast see very little development and even then the true storyline only starts moving forward very late into the series, which may leave many viewers wanting more.

Visuals:
Those anticipating plenty of combat won’t be disappointed with the visual quality found during every battle in Freezing as each character not only has a unique weapon with almost no doubles, but plenty of flashy finishing attacks as well. These combat scenes are well animated with plenty of bright colors and powerful attacks that really drawn in the viewer.

Of course along those same lines, there are also breasts and fan service absolutely everywhere. While the characters themselves are designed well with a lot of attention to detail and their proportions, their clothing happens to be torn during every single fight, usually around the chest area. To put it simply, if there is a female character given even minor attention during an episode, their breasts will likely be exposed at least once. So if you happen to be a fan of exposed breasts, panty shots and plenty of fan service in your anime, such as myself, then Freezing is certainly the show for you. 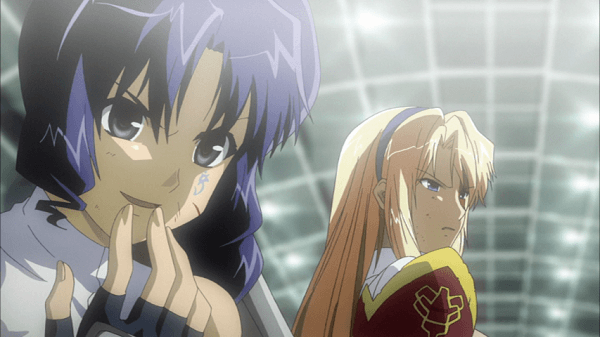 Interestingly enough however, there are only a few sequences where this is played off purely for fan service while the rest of the nudity usually only occurs in the heat of combat, usually accompanied by blood as Freezing features plenty of deep bloody wounds alongside clothing tears. It is also worth noting that, thanks to the Stigmata system, the female characters can even regenerate their clothing so it can be torn up a few times in a single fight.

Audio:
As one would expect, Freezing features both the English and Japanese voice work and both are of relatively impressive quality. It seems a bit strange however that most of the English members of the male cast however seem to have deeper voices that don’t seem to fit the appearance of the characters. On the other hand, Caitlin’s portrayal of Satellizer and Jamie’s handling of the strange speaking Rana are very impressive, with the two stealing the show anytime they happen to speak. 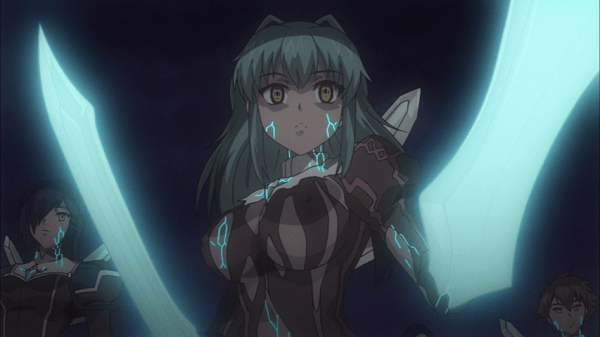 As for series’ soundtrack, the background music is usually suitable enough to provide a good atmosphere for battles and serious scenes, though it is largely unnoticeable compared to the action happening on screen at any given time. The opening theme for Freezing happens to be “Color” by MARiA while the closing theme is “Kimi wo Mamoritai” by Aika Kobayashi. Both of these songs are enjoyable to listen to but feature the same type of tone, making it a bit disappointing that the two songs weren’t varied more.

Extras:
Freezing comes with a number of special features alongside your standard inclusions of a clean opening and ending song, commercials, promos and trailers. These bonuses include Episode commentaries for Episode 6 and 11 and six short OVA episodes which take the fan service to an entirely new level.

Episode 6’s commentary features Josh Gelle who plays our male lead Kazuya Aoi and Jamie Marchi the voice of Rana Linchen. These two answer various questions from the other members of the cast which provides a few small laughs and they also reveal they have no issues with the shows high nudity content. Episode 11 features the other two members of the female cast including our female lead Satellizer’s voice actress Caitlin Glass and Luci Christian who voices Ganessa. These two spend most of the commentary joking around with each other and how they felt working on a “booby” show. 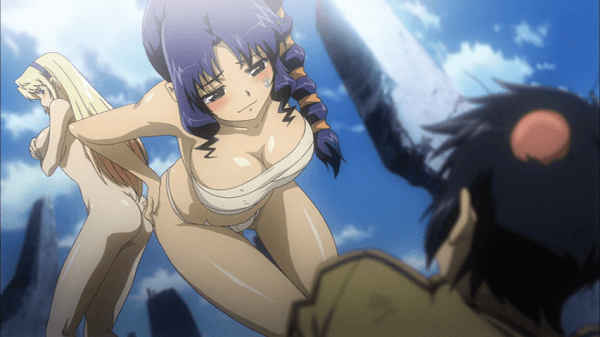 As for the OVA episodes, these are very short in length, usually only lasting a maximum of three minutes total. However if the viewer hasn’t seen enough of the female characters’ breasts then this will help satisfy their nudity quota as each of these feature the busty characters in a number of provocative situations, turning the fan service up to eleven.

Overall:
While many people can simply look at a show like Freezing and instantly pass it up because they don’t like fan service, they would still be missing out on a rather enjoyable storyline focused on a who has built a wall between her heart and everyone around her with high levels of action in every episode. Of course the fan service is very strong in this one so those who don’t appreciate lots of bare breasts in their anime may want to steer clear. For fan service fans however, this show is busting through its top with quality that shouldn’t be missed.