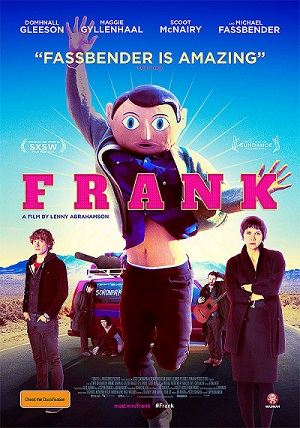 Where does one even begin to understand a movie like Lenny Abrahamson’s Frank? The answer is simple: you don’t. You simply sit back watching the insanity of the plot and its characters unfold. Made by the same guys who made Submarine and The Double and Inspired by Chris Sievey’s comical character (Frank Sidebottom), the film’s eponymous character wears an oversized paper-mache head. This absurd concept sets the tone for the rest of this black comedy film with an anarchic, indie punk rock feel. 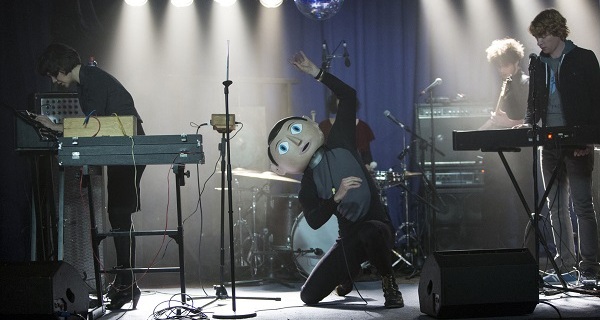 The film can largely be broken up into three acts, with the audience following the plot largely from the perspective of the timidly sweet, amateur musician, Jon (played by Domhnall Gleeson). We first find Jon in the middle of a creative rut. He believes he is unable to compose music due to his largely comfortable but uninspiring surroundings in the suburbs. Due to fate, and a nervous breakdown, Jon ends up being invited to play keyboard for a band called ‘Soronprfbs’ after only being asked if he can play some very basic notes. 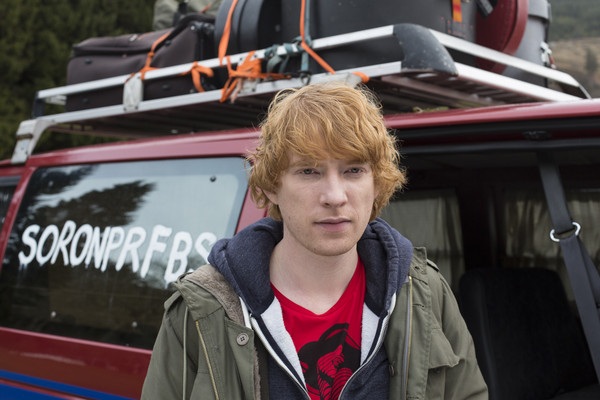 Following the performance, he is (essentially) kidnapped to a cabin retreat by the band in order to help them record their next album. Among his eccentric band mates is the sexually deviant manager Don (Scott McNairy), the aggressive theremin player Clara (Maggie Gyllenhaal), and the titular, paper-mache head-wearing Frank (Michael Fassbender). Jon does his best to try and fit in with his fellow band members but is largely met with hostility, which is repeatedly played for laughs throughout the movie.

Things escalate with the band due to Jon garnering social media coverage of Soronprfbs by recording and posting their rehearsals online. Their meagre online popularity leads to them being invited to play at the festival ‘South by South West’. Their limited success and fame does take their toll as underlying tensions surface. 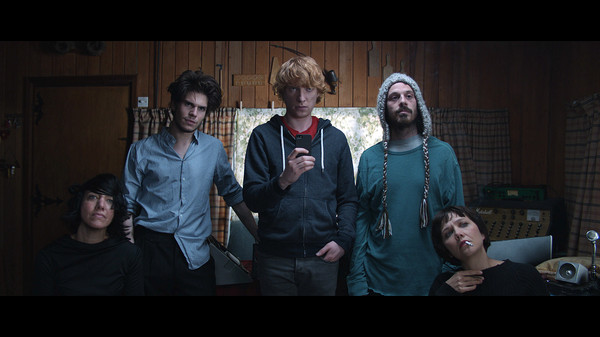 The narrative is largely minimalist with few set changes or character developments. Jon starts the movie as a talentless pop-musician wannabe and by the end he remains such. Although we, the audience, learn about the quirky characters which inhabit this film, we don’t get to see them develop or learn anything. In fact, I would go further and say that most of the characters are underdeveloped in a number of aspects and that a lot of the actions they take are not given any rhyme or reason (i.e. the irrational hatred of Jon by the rest of his bandmates). The film appears to pride itself on its zany, quirkiness which in turn means that it loses focus and goes from one disjointed event to another with the film’s third act providing somewhat of an anti-climax. 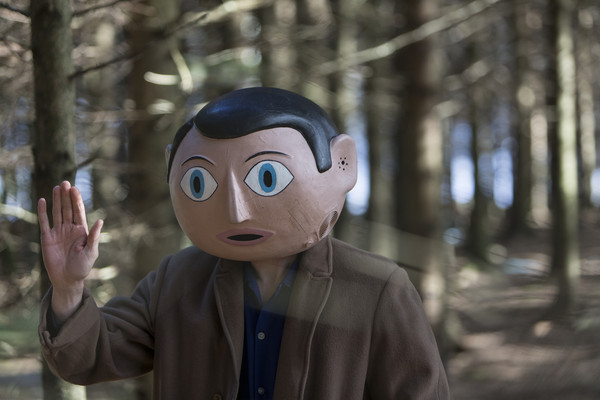 Gleeson is great in his performance and brings a timid charm to Jon as he wallows in his status as a fish-out-of-water in the band. Fassbender is similarly enjoyable in his portrayal of Frank as he gives a performance on expression through physicality to overcome the mask. I also believe that casting one of the (currently) biggest names in Hollywood to play a character whose face is covered throughout the film is comedic genius. Gyllenhal does an admirable job with Clara, but since the character appears to simply be a parody of the manic ‘pixie dream girl’ trope of so many Hollywood films of late, she doesn’t appear to have been given much to work with by the script.

The best way I can rationalise this film is as a parody, especially of the sub-genre of biopics focusing on the life and works of musicians. In particular, it takes aim at the common trope of musical genius going hand-in-hand with mental illness. Although there were several moments where the film enticed me to laugh out loud at several points, this aspect did make me squirm as the film repeatedly brushes off its lack of character motivation with explanations along the lines of “It’s a mental illness”. I would like to believe that this was largely done in parody of the trope from aforementioned biopics but I can’t shake the feeling that the writers relied on this punchline a bit too much in Frank.  The more I think about it, the less comfortable I am with this film. 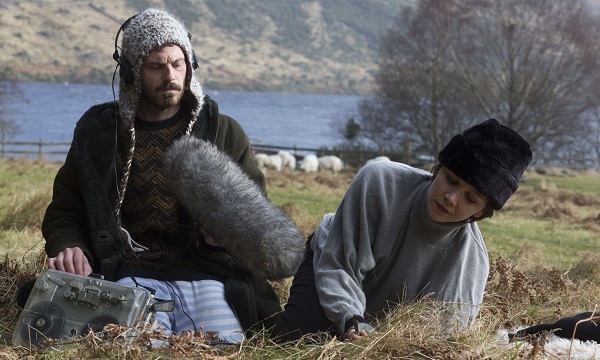 The visuals are quite pleasant through most of the film with the direction doing a capable job of showcasing scenery and at times setting up jokes. The cinematography gets to showcase some fairly breathtaking sites in both New Mexico and Ireland as the film moves through the plot. Shots of suburban England are suitably grey and drab in comparison to the green of Ireland and the yellow desert of Texas. Largely, this lies in the background as most of the scenes are shot in either interiors or urban environments. The actors are dressed in suitable hipster-chic fashion which, I dare say, is complimented by the addition of a giant paper-mache head. Occasional graphics of Jon tweeting the events of the plot also make an appearance and help to deliver a witty punch-line to keep you going. 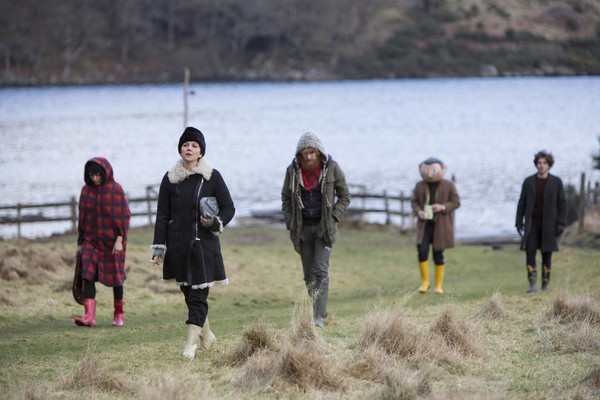 The music is a big part of this film (surprise, surprise). All the diagetic music was recorded on-set live by the cast at the same time as shooting. I can best describe it as indie industrial punk with a variety of unusual instruments and sound recordings combining to make what I assume is music. This is certainly not something you’d hear playing at club or requested on radio as it’s suitably abstract and avant-garde to match the unusual personalities of its creators. It’s difficult for me to give an objective view of the music within this film and due to my limited knowledge on this topic I can only give you this: When I first heard Soronprfbs play, I wanted to tear my ear drums out. By the closing credits, I had warmed up to their sound considerably. Whether they’re good or not is still a mystery to me… or maybe that’s the joke? 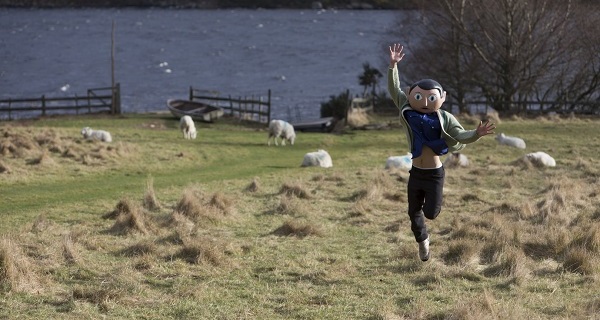 Overall, I feel like this film banks too much on the unusual nature of its characters and the absurdity of their actions. Sometimes, this hits the mark and tickles my funny bone, but by the end the laughs ran dry for me. This film does raise interesting questions about the nature of the creative process and the standards by which we measure artistic success, which certainly hit a note with me.

The hipster quirk can certainly be charming, but eccentric for the sake of eccentric does not create enough substance for an entire film but it might keep you entertained for a couple of hours. This movie still made laugh out loud (or “lol” as kids these days would say) at times, and it is certainly deserving of your attention… just be prepared for the rocky third act and perhaps some uncomfortable themes.