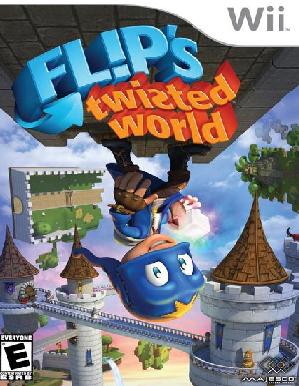 Flip’s Twisted World is a platform title which puts you in control of a young aspiring wizard named Flip. While a platformer at heart, Flip’s Twisted World brings some innovative controls to the genre with the simple twist of a WiiMote to flip the world allowing for a unique 3D experience. There is a lot to be said about this title as it does so much right but still comes up short overall, all of which I will cover. Here is my review.

Story
Flip’s Twisted World starts off by telling the story of Master Fulcrum, an older Wizard who ends up getting a baby dropped off at his doorstep. After taking the child who is later known as Flip in, and many years later, Flip starts to learn magic and has a powerful sense of curiosity that eventually gets the best of him which leads Flip to discovering a magic book. Doing this sends him to a topsy-turvy land where Flip must prove that he has the magical know-how to retrieve the six chapter stones. Flip is also joined by a magical cube with six personalities to guide him with tips and instructions along his journey. 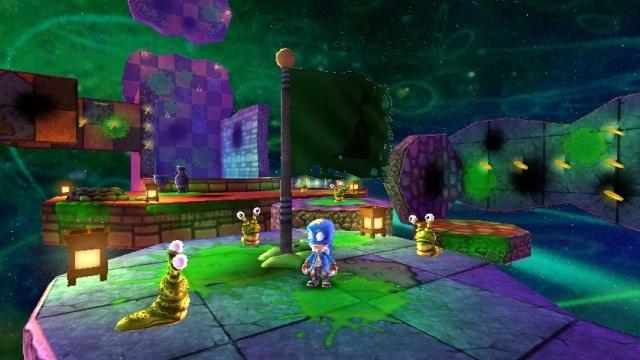 Now, while this story sounds appealing, there just is not enough character development to get much out of the experience story-wise. Each character looks charming and has personality in the visual aspect, but without voice acting aside from Master Fulcrum who is narrating the story, most characters come across as hollow and in need of depth. I didn’t dislike the way the story was told, I just felt like more could have went into it to fully make me want to progress and look forward to meeting each new boss. With the bosses and enemies being detailed and having sound effects to reflect their nature, there was simply no reason to really look forward to meeting any of these characters aside from appearance alone. In a way, it’s like having a really nicely wrapped present. You look forward to uncovering it’s mystery, but once unwrapped it is just an empty box. Sad to say as I felt so much potential was unused.

Gameplay
Flip’s main gimmick within the game is the ability to flip the screen instantly to explore new areas and reach certain items and doors that were otherwise unobtainable. Flip also can pull out a book to smash enemies which is his main attack in the game as he collects coins along paths and platforms set all over the various worlds. Controlling flip with the nunchuck and Wiimote is simple and if you have played any of the 3D Mario titles, it feels similar as walking, running, jumping all perform quite well for the most part. Now the general controls are solid, but the actual specialty controls are a bit of a mixed bag.

The first thing to talk about would be the flipping itself. This actually is pulled of without a problem as it really is as simple as just holding down the B button and twisting the Wii-Mote in the direction your wanting the world to flip. Let go and the world flips exactly like it sounds. There is a huge problem to this though, and that is how you fall.

You see, the rooms within the levels themselves are not properly equipped for you to flip at will which hurts the gameplay quite a bit. What I mean by this is that when you flip the screen, Flip falls to the platform on that side but the problem is usually there is nothing to fall on leading to a quick death. I even had many occasions where I fell to the platform I was supposed to land on and died instantly from the fall. It doesn’t happen everytime like that, but it happens enough to make this experience that should be fun a lot more frustrating. You have a set number of lives and while there is a checkpoint spot in each level, but it is very easy to run through lives due to the flipping deaths in the game which made me have to start over on areas constantly throughout my playthrough. 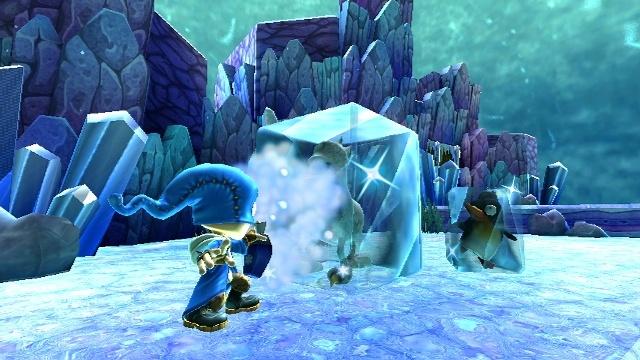 The standard attack with the book is pulled off by simply wagging the WiiMote and gets the job done fine on standard enemies. You can also perform a jump or double jump and land do a ground pound type attack with the book at your feet, smashing whatever poor foe that is below you. Bosses on the other hand can be a bit different though as while there are some creative ways to detroy them, collision detection can be off quite a bit. Simply hitting a large enemy can deal damage to Flip as attacking with the book is a bit to close ranged for these types of battles. The good part about boss fights is how they play out as strategy must be used to find the weak points for each boss.

While the main power Flip has is to twist the world, other useful techniques can be pulled of as well, such as freezing enemies and performing puzzles to get to certain keys and areas to progress further. The puzzle elements were actually all well done and well though out as well so I was happy with these and would have loved to seen more. Along with the fun boss battles, the puzzles were one of the most redeeming gameplay factors in the game.

Glitches also sadly show up quite a bit as well, and many of these come from the flipping option, but some happen by just moving in certain areas or performing general attacks. The main glitch I encountered was by flipping into platforms that lead to nothing, causing me to have to jump to my death to get off properly. There is also times when performing a ground-pound attack that I would fall through the level or fly forward and keep going until death occurred. The game isn’t totally plagued by these, but they are all fairly common in most levels.

Camera angles can also be frustrating. Most of the time, the camera follows Flip from a distance and is easily controlled allowing for zooming options if needed. When you really need a good camera angle, such as to get a view of what you are flipping into, the camera goes crazy some of the time and will zoom in without notice causing for limited sight and of course, another way to die.

If you read all of those as complaints, which yes, there are many flaws in this engine, you should also know that when the game isn’t providing any glitches or wonky camera work, the game can be fun and it is easy to see where the developer was taking it, it is just a bit of a disappointment that the gameplay doesn’t have any polish needed to let the game shine at it’s true potential. 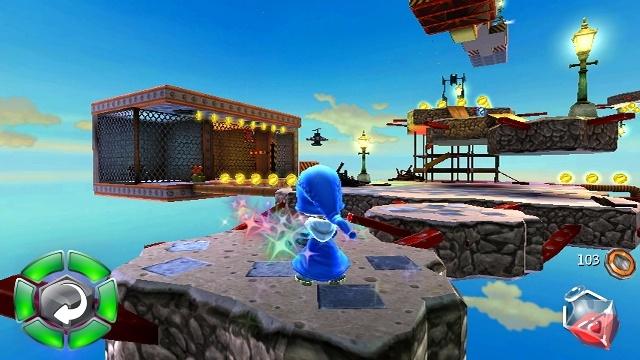 Graphics/Audio
As I mentioned, each character looks clever and unique in Flip’s Twisted World. The worlds are also made up with clever design and the crisp, bright colors make the environments have the same appeal and quality as many A-List platformers on the Wii. Flip is easy to like based on appearance alone, as well as the cube and all of the bosses within the game so this was definitely nice to see such a high presentation value applied.

The Audio in the game has a few different elements. Voice acting is limited to Master Fulcrum aside from enemy noises, and with Anthony Stewart Head (from Buffy fame) voicing this, this is another high point within the title. I still feel that voice acting or even just mumbles like the Sims titles or Animal Crossing could have given the game more life as the text alone leaves much to be desired. Tommy Tallarico, who created some of the most memorable soundtracks for video games in the past composed the full soundtrack and the quality does show throughout the game. In a way, the music is very reminiscent of a lot of the off beat titles from the 90’s. I enjoyed each melodies up until the end and everything fit within the bizarre world. Everything ties in nicely as for a budget title, production value was definitely a huge plus in Flip’s otherwise flawed first outing in the video game world.

Overall
When I first heard about this title, I was drawn in instantly as it reminded me of the platformers that made the Nintendo 64 so popular back when every title was trying to repeat the success of Mario 64 and we were getting one gem after the next. When it came to Flip’s Twisted World though, I left my experience feeling a bit disappointed and wanting more from the game overall. Flip’s Twisted World is a fun title, but glitches and other issues hold it back from the huge potential it carries to be truly great. The innovation Flip’s Twisted World presents is fresh and exciting for platformers, and it is a shame proper execution was not put into the final product. Flip may not be a hidden gem that it may appear to be on the outiside or quite worth the current pricetag, but I definitely recommend anyone wanting a unique experience to at least give it a try, as there is still a decent game buried underneath the flaws.

I give Flip’s Twisted World