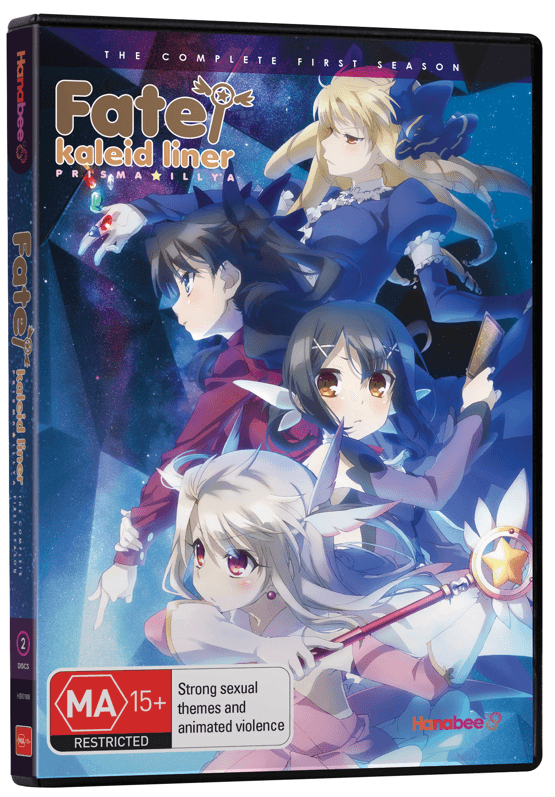 The magical girl genre is something that many anime fans are familiar with. Anime fans who grew up in the 1990s in particular will almost definitely have seen at least one certain influential magical girl series. Even so, recent series in the genre do not garner the same amount of attention as they used to. Some manage to become mainstream viewing within the western anime community, but others remain obscure and known only to a small group of anime fans. Fate/Kaleid Liner Prisma Illya is one such series and therefore less likely to become as popular as a shounen series, but at the same time, it is a spin-off of the increasingly popular Fate/Stay Night series. Does this magical girl series have enough going for it to warrant a purchase, or is this series best left as a title for only dedicated fans of the Fate series to collect? 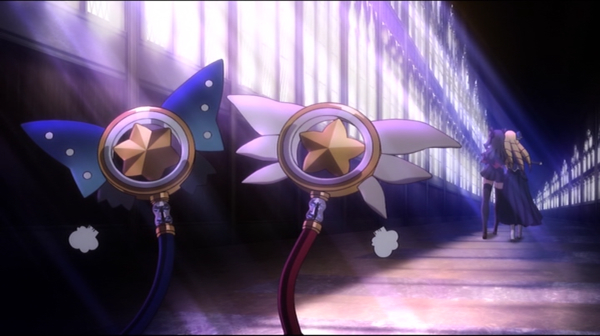 Illyasviel von Einzbern is a fifth-grader who wonders what it would be like to be a magical girl. Somehow hearing her talk about this, the magical Kaleidostick Ruby becomes interested in her and eventually convinces Illya to become her master after leaving the mage Rin Tousaka. Illya agrees to help Rin find the five Class Cards that still need to be found, after some inappropriate name calling, and the Kaleidostick Sapphire shows up with Miyu as her master soon after leaving the mage Luviagelita Edelfelt. Miyu then transfers into Illya’s class at school and just happens to move into a mansion that suddenly appears across from Illya’s house. This is only the beginning of this series’ bizarreness.

This series is extremely problematic at times. It depicts a group of fifth-grade students who for some reason have knowledge of sexual themes, and Illya is depicted as having an inappropriate sexual lust for her brother. Throughout the majority of these episodes, they are mostly presented as innocent characters who embody the sweet, adorable nature that children in real life have. There is also a lot of clean humour present in scenes set in the classroom; any scene involving Illya’s friend Tatsuko being nonsensical yet absolutely hilarious. However, class 5-1 teacher Taiga has some very clear anger management issues, another problematic element of this supposedly cute series and one that is played up in the dub.

Illya’s cuteness not only serves as a way of showing her innocent nature but as a foil to Miyu’s shy and seemingly cold nature. Miyu’s past is not discussed much in this season, and only towards the end of it are even the smallest of details about her actually mentioned. What is revealed about her is that she had no place to stay, suggesting that something happened to her parents in the past. Losing one’s parents would cause any child to feel lonely and find it difficult to open up to anyone, but Illya’s kind-hearted nature helps Miyu become close to her. This is one of the few things this series does well; it shows the power of friendship without coming across as overly contrived for dramatic purposes. 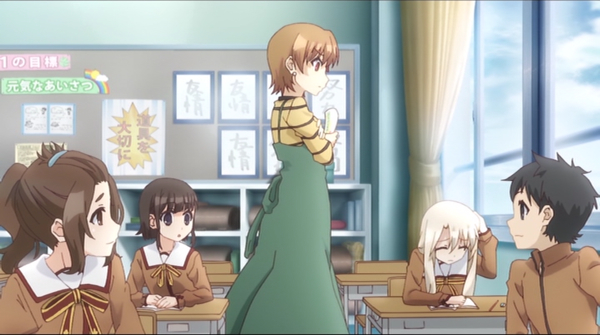 Silver Link has clearly put a great deal of effort into the animation of this series. The character designs are easy to distinguish, and many scenes are beautifully animated and great at showing off the cuteness of the characters. The backgrounds are relatively average, but the design of the mirror world is effective at evoking a sense of darkness and danger, a sense that Illya so clearly feels as the series progresses.

What is disappointing with the visuals are the scenes in which the cuteness is replaced by extremely inappropriate content. Illya is shown naked, albeit with hair and a bath toy acting as censorship. Some such scenes occur in the bath, although at one point she takes her top off and jumps on Miyu in her bedroom for no good reason. This scene could be interpreted in two different ways. It may simply be a representation of a child’s innocence causing them to be unaware of the issue with what they are doing, or it may be a deliberately perverted act. Either way, its presence in an anime is disturbing and calls into question just how cute and innocent these characters really are. 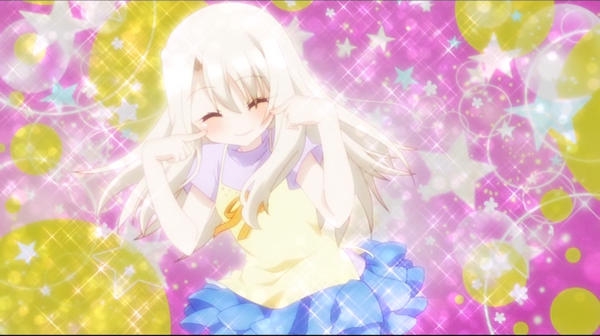 The audio is the best element of this series overall. Every last piece of background music composed by Tatsuya Katou is fantastic and perfectly suited to the series. The opening song, “Starlog” by ChouCho, is one of the best anime songs in recent years, as is the insert song from episode nine, “Kagami” (“Mirror”), also by ChouCho. Both “Prism Sympathy” and “Tsunagu Kizuna – Tsutsumu Kodoku” by StylipS are average pop songs, however.

The English dubbed version is almost perfect, a pleasant surprise given the amount of terrible or average English dubs out there. Cynthia Martinez gives a standout performance as Illya, managing to capture her supposed innocence, cuteness, sweetness and fear perfectly. Brittney Karbowski also puts a lot of energy and effort into her performance as Illya’s classmate Tatsuko, a hyperactive girl who spouts random nonsense whenever she appears. As is typical with English dubs, Japanese names are consistently mispronounced. However, all other names, including the long names that some characters have, are pronounced without any apparent issues. 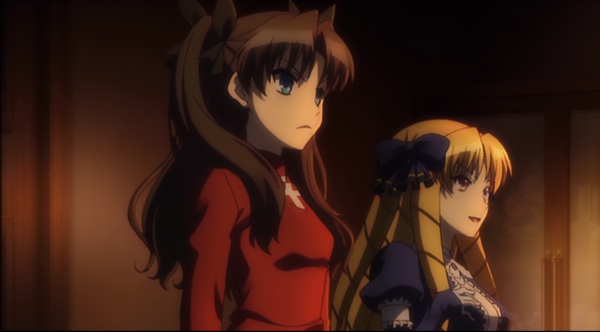 This release comes with a few on-disc extras that are worth checking out. As well as the textless opening animation sequence and the three textless ending animation sequences, the OVA episode “Sports Day” is included. As is expected with OVAs, this episode does not exist for plot purposes. It simply allows viewers to see the characters they like having a good time doing something mostly harmless, with emphasis on ‘mostly’.

The episode follows Illya and her friends as they prepare for their upcoming sports day, and in particular as they train for the dancing component of it. Unfortunately, more of the series’ disturbing ‘humour’ returns here as Illya’s friends discuss the sexual connotations of the word ‘meat’. The supposed innocence of the fifth-graders is one of the better elements of this series, making their knowledge of such a thing seem unrealistic and clearly contrived by a person with a perverted sense of humour. If nothing else, fans of the hyperactive Tatsuko will enjoy the slightly increased screen-time she receives in this OVA. 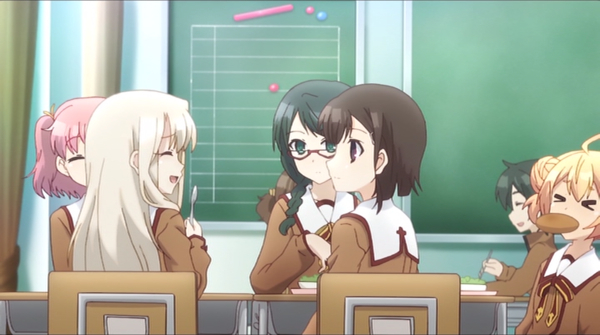 Fate/Kaleid Liner Prisma Illya is about a sweet child who wants to be a magical girl, only to discover that being one actually requires an immense amount of energy, concentration, bravery and resolve. It delivers important messages about what friendship means and how one should treat their friends. The one major strike against it is the sexual themes, and the inappropriate sexual behaviour of Illya, which is most prominently featured in episodes one, seven and ten. All of this unfortunately makes it impossible to be able to genuinely recommend that it be watched by anyone. The sexualisation of the young characters is simply too disturbing. Furthermore, it is jarring compared to the otherwise cute nature of the show, and it will likely only get worse from here.