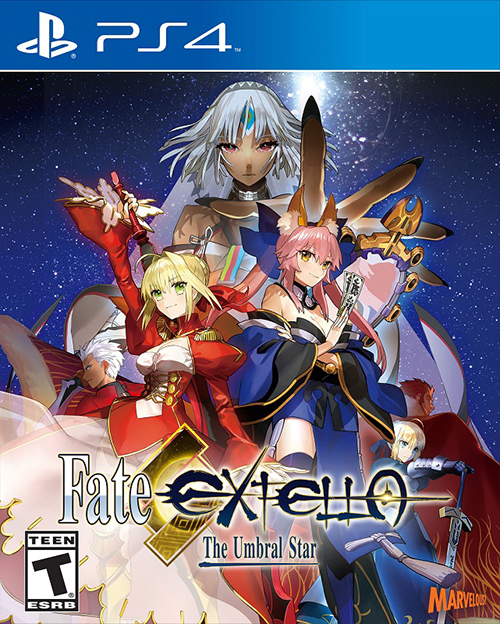 Few would have guessed that when Fate/stay night was released as an adult visual novel over a decade ago that the series would expand as far as it has today. What originally was a Japanese exclusive series, and still is in many ways thanks to numerous games, anime, manga adaptations, and more, has made its mark in the West over the last few years and now XSEED Games has brought Fate/Extella: The Umbral Star to fans eager for more. With a different playstyle from previous Fate games, is this entry worth picking up?

Fate/Extella: The Umbral Star begins after the Holy Grail War has come to an end with Saber Nero and her master (praetor as they are called) being the victors. With players taking the role of her nameable master, the pair are given full control over the Moon Cell Automation computer and as proof of their victory Nero is given the Regalia ring that allows her to command former enemy servants, the spirits of heroes throughout the ages, as her own. 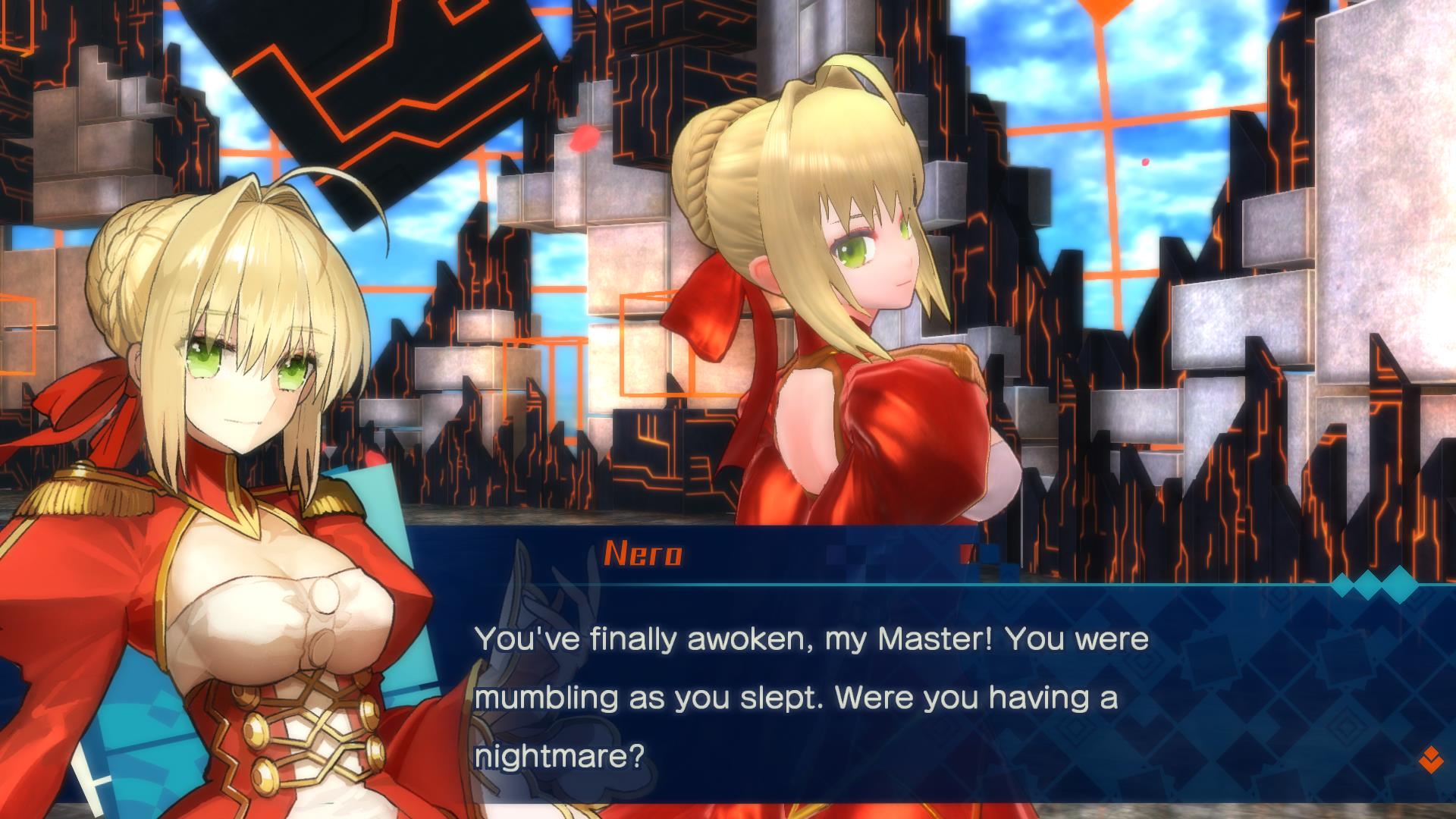 Unfortunately for Nero, her and her master barely have a chance to examine their new realm when they learn that the digital world of SE.RA.PH created by the Moon Cell Automation has been intruded upon by others that also possess Regalia Rings. As such it is up to Nero, paired with her master, and the few Servants that still obey her to take to the battlefield and conquer what is rightfully theirs.

In context the events described make a decent amount of sense and even if you aren’t completely familiar with the aspects of the story, Nero attempts to provide some background information at the start but that doesn’t meant that those unfamiliar with the Fate series, or those that never touched Fate/Extra on the PSP, will be able to immediately grasp some of the finer parts of the story here and this can lead to a bit of confusion and unfortunately the title does little to really explain these elements to newcomers who will initially be put off by the many unfamiliar terms that are easily tossed around. 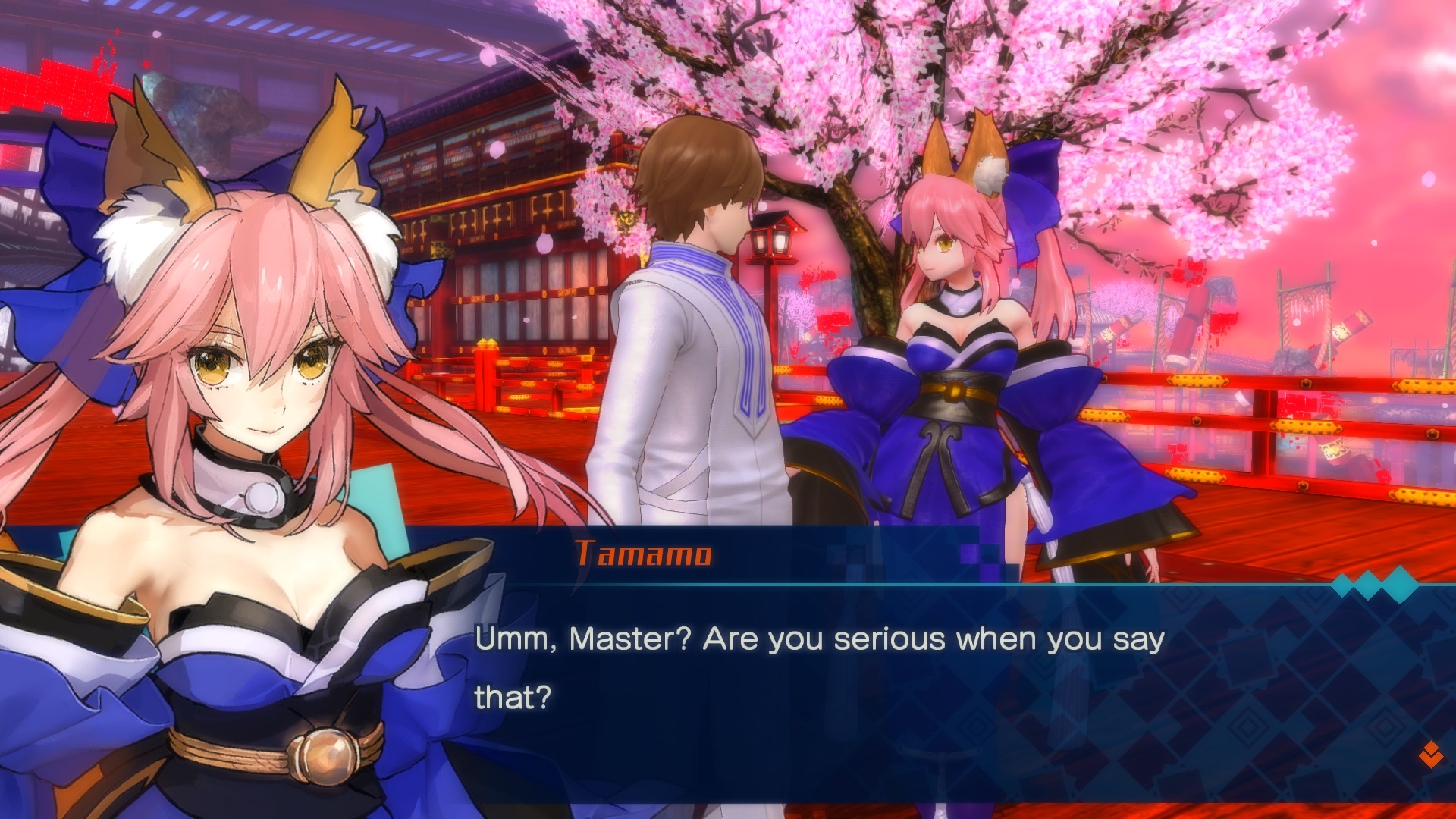 That being said, Fate/Extella: The Umbral Star’s storyline is very enjoyable once it gets going as this is a game that is something of a split between action game and visual novel. This means between every battle section there is quite a bit of dialogue as the story unfolds and the player interacts with their current Servant in order to grow their bond level by selecting various dialogue choices. Higher bond levels allow players to equip them with more passive boosts as well as the potential to unlock special unique scenes. The story features quite a bit of explanation as you progress through it so things that may catch familiar fans off guard is generally explained over time and considering players unlock additional full storylines following the viewpoints of a certain tailed Caster class and white haired Saber class, as well as small side-stories for the lesser featured Servants, and you’ll  find that there is quite a lot of content to enjoy here for fans of the series’ lore and characters.

Once you get through the various visual novel segments that split up the game’s action, players will find that Fate/Extella: The Umbral Star is quite similar to many other Musou styled titles. By selecting a mission they wish to partake in, the difficulty of said mission which also presents players with a recommended character level, and opting to take on various side-missions to raise your bond with the Servants in your group, players will eventually find themselves on a battlefield controlling their main Servant and tasked with, almost always, controlling most of the areas on the map. 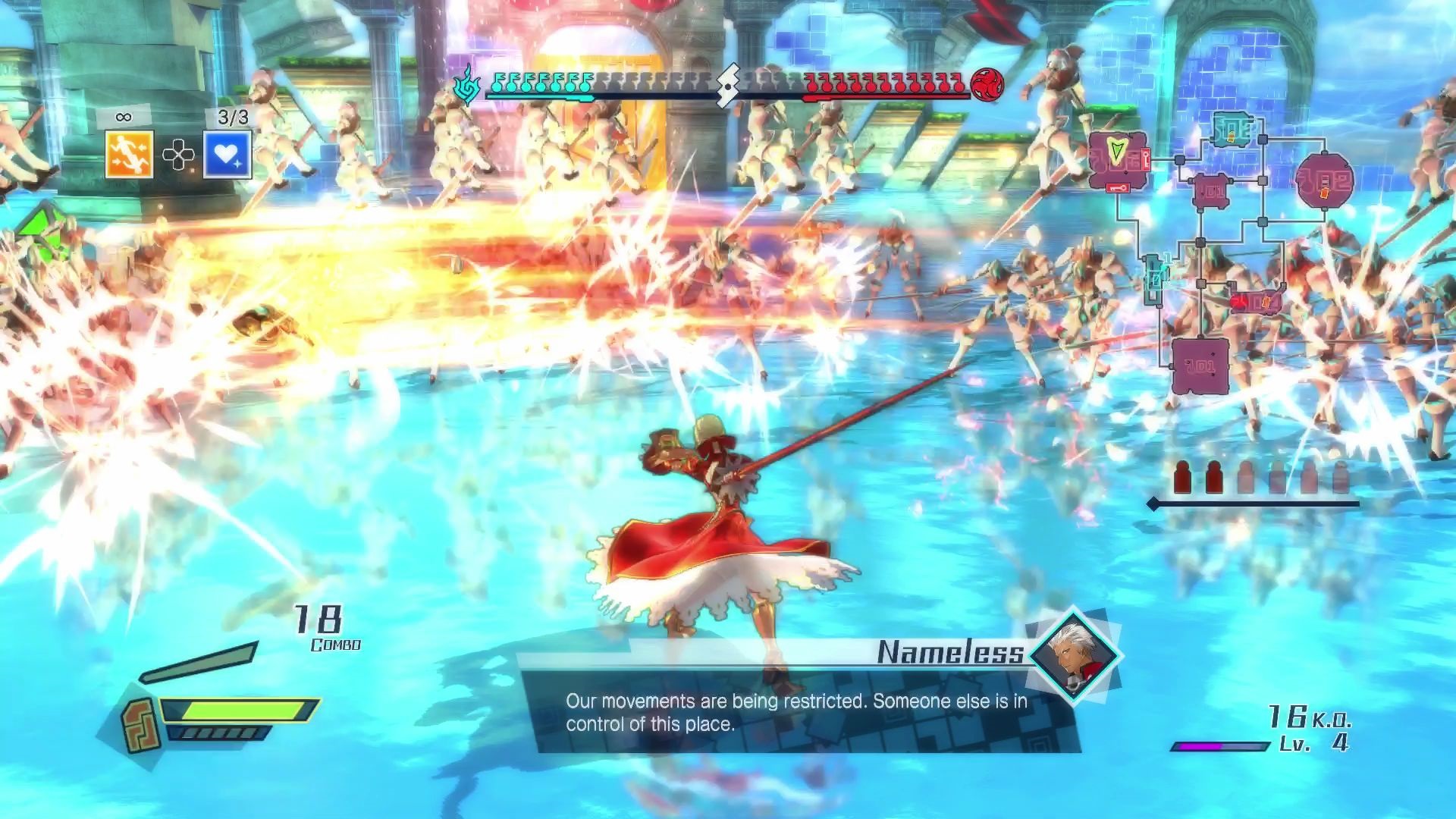 You see, each area in a battlefield contains a certain number of keys that are used to eventually conquer an area in SE.RA.PH and generally the final boss (enemy general) won’t make an appearance until you’ve obtained a certain number of keys. This means that taking a certain area might provide the player with only one and another could gift them with five. The problem is that thanks to some fairly poor ally AI, the battlefield never feels entirely safe for the player despite the actual combat being simple to understand.

I say this because thanks to “Plants” that send enemy forces to invade friendly areas your own allies will almost always fall to an invasion unless you intervene. This means that not only must players often prioritize capturing high rated areas by defeating the “Agressors” that spawn once a certain number of fodder soldiers are defeated in the area, but also take out the Plants because areas that are being invaded do not count to your total, often leading to warning messages that the enemy is about to complete the Regime Matrice, all while making sure to avoid certain traps that tend to be laid out, though the player is often warned beforehand about such traps. 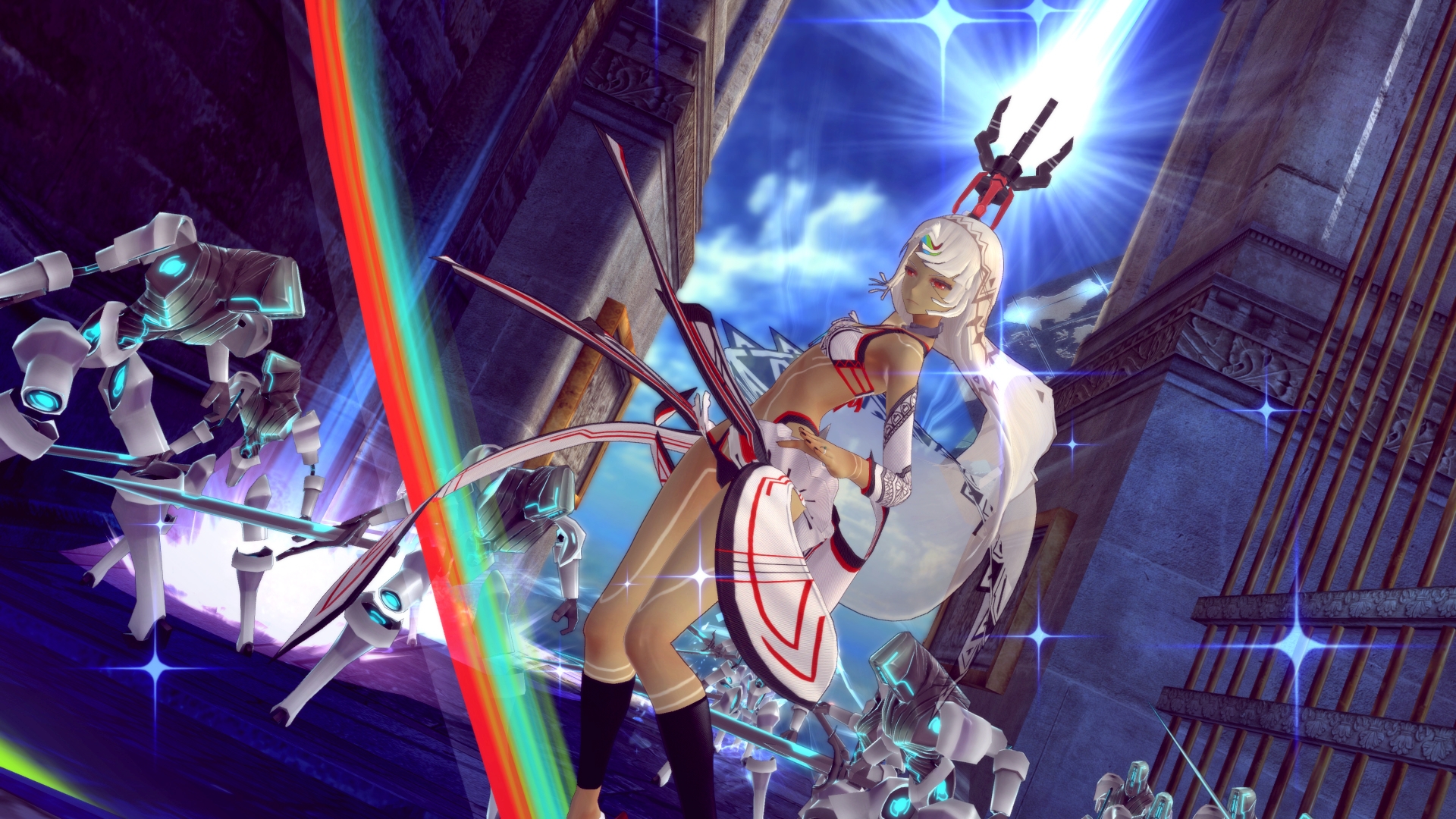 Combat in the game, as mentioned before, is incredibly easy to understand and master as players will find that each character has light attacks and heavy attacks that can be combed together into different move strings, special moves that take up parts of a refillable gauge, and even certain characters (the ones that players will likely be controlling the most) have the ability to transform into Moon Crux forms that increases their stats, changes up their attack strings, and makes their attacks nigh unblockable. This makes for an easy to learn and master combat system that is incredibly fast feeling with enemies spawning in quick enough and in enough number that combos over 2,000 are quite frequent and kill counts over 10,000 are more than feasible.

In fact, an ultimate move that has the ability to nearly clear an entire area is also available, but while extremely powerful it has a drawback. Not only is the Noble Phantasm move only available once per battle, players must gather three items around the stage before it can be unleashed and while it is certainly possible to dash from area to area while dodging enemies, its generally not worth the extra effort unless you begin to really struggle and as mentioned before, this is entirely possible if you don’t manage the battlefield well enough. 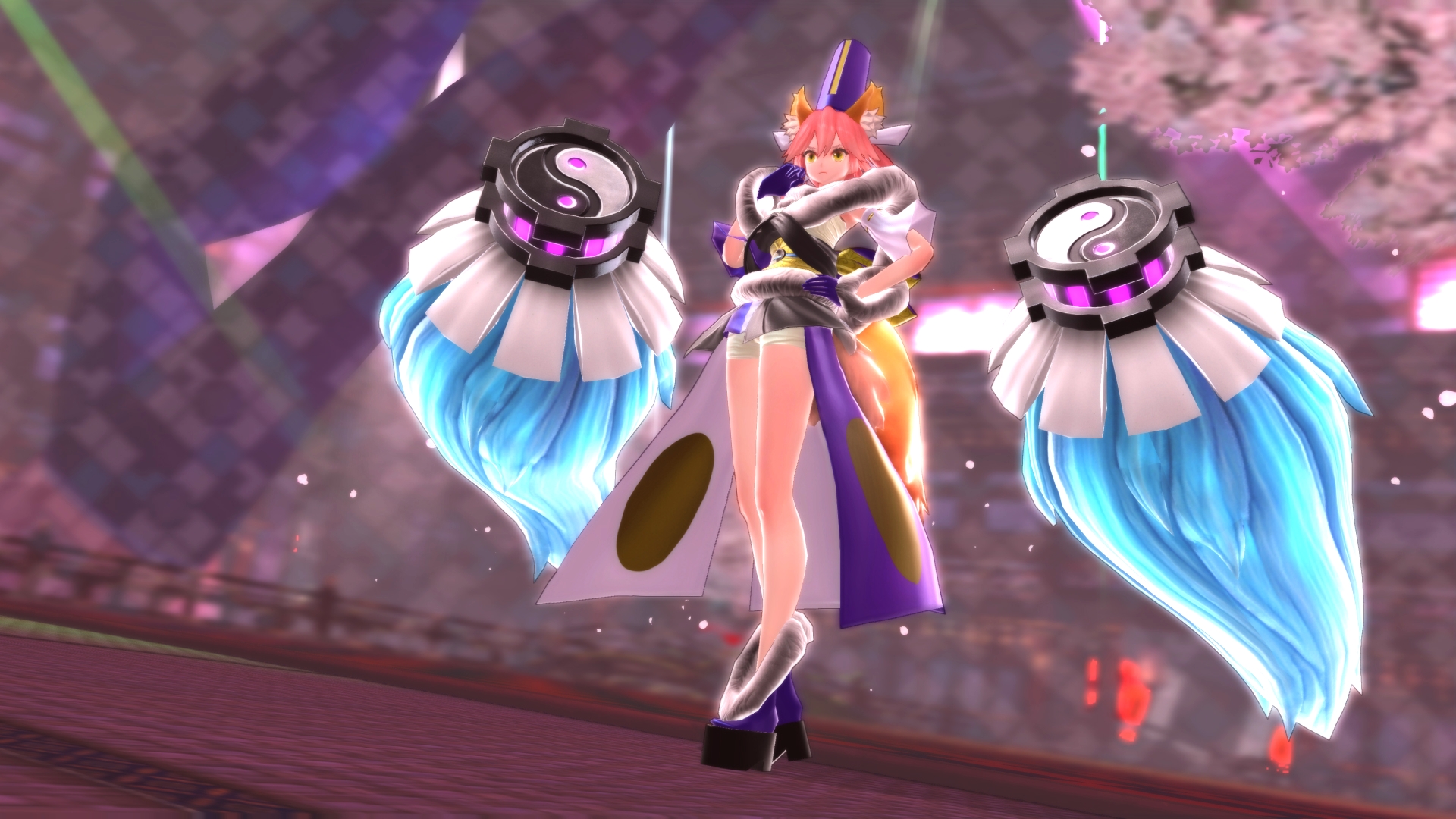 The generic enemies you battle against often offer very little challenge but facing off against enemy Servants is another story. They often have special quirks about them and can utilize some incredibly devastating skills that may leave the player backpedaling a bit to use an item from their raiment. These battles tend to be quite rewarding and are often the highlight of any stage. As for the raiment, players will unlock various materials and in-game currency that can be equipped to give the player various boosts that can be used in battle ranging from healing, boosting stats, swapping to an ally, or even creating decoys though since players are not able to select specific skills when creating a piece of equipment, sometimes it is best to choose what fits your playstyle or a stage even if it may not be the best available at the time.

Outside of the main story mode there are side-quests that place the player in the shoes of the other Servants to experience a personal story for them and try out their special moves, a Free Battle mode that simply allows you to choose to fight as whoever you wish, and that is unfortunately about it outside of plenty of bonus lore material to delve into for fans of the series.

While Fate/Extella: The Umbral Star always runs at a fast pace and the action is quite impressive to see thanks to the flashy moves that the Servants are capable of unleashing, the biggest issue players will encounter happens to be how repetitive many aspects of the game feel. Thanks to the very small number of stages available and their, for the most part, uninspired designs many of the battlefields will feel incredibly similar to one another and it doesn’t help that outside of a few later instances, the generic enemy types tend to be incredibly bland in nature and are rarely a threat. 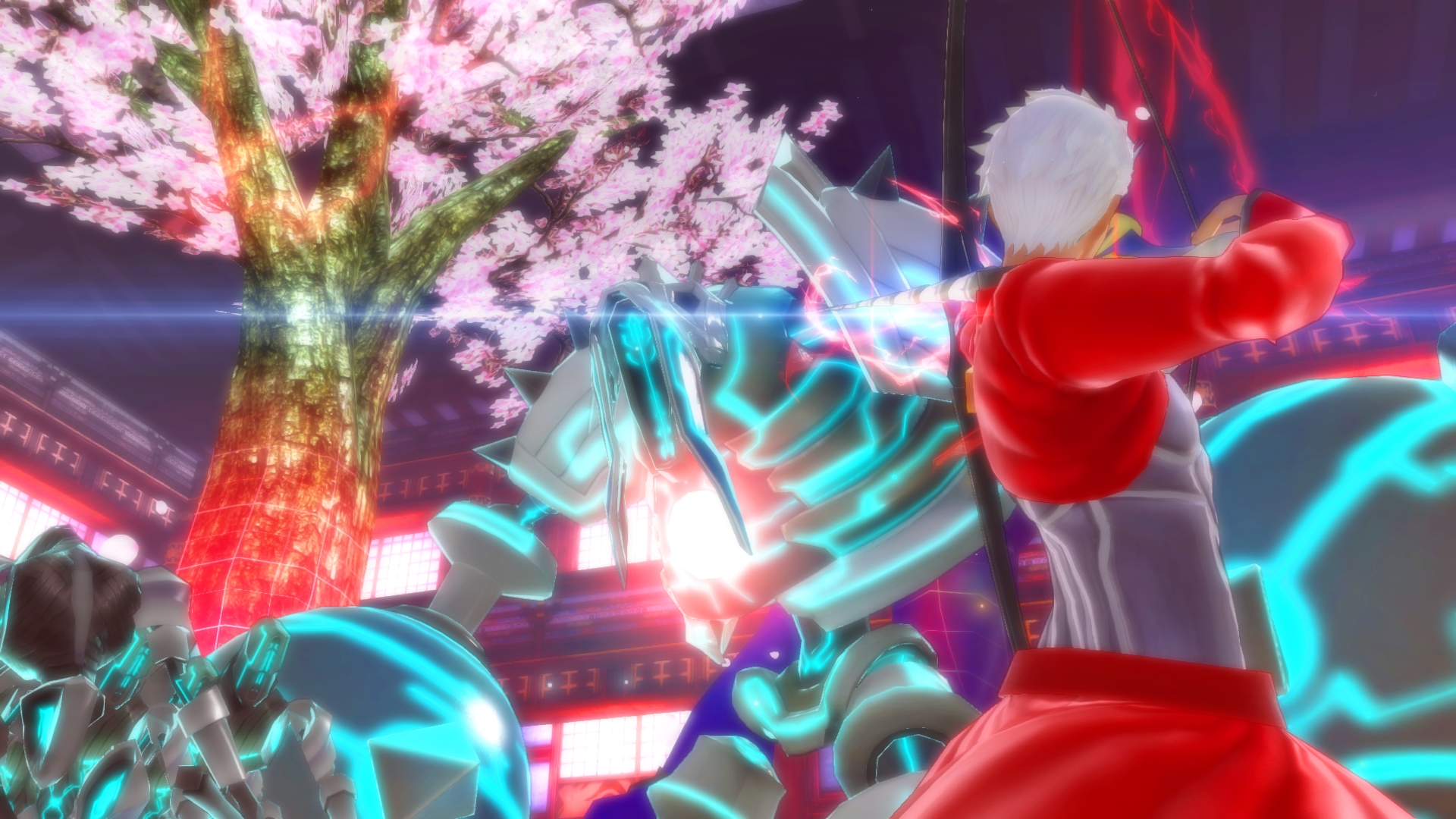 Thankfully thanks to the style of the main characters and the artwork used in visual novel segments, players will still find quite a bit to enjoy in the core aspect. As for the soundtrack and voice work, it is worth noting that almost everything in the game is voiced in Japanese with English subtitles as only the player character is left unvoiced. The soundtrack features quite an array of memorable sounding tunes that fit well with the fast paced action of the battlefield as well as the more dramatic moments of the story.

Fate/Extella: The Umbral Star’s fast-paced combat controls incredibly well and makes your Servant feel like a real devastating force on the battlefield combined with an interesting story that will delight fans delivers an incredibly satisfying experience. Unfortunately it tends to be dragged down by poor allied AI, repetitive battlefields, and bland standard enemies that rarely change up the nature of combat outside of a few key moments of the game and during Servant encounters.

Fate/Extella: The Umbral Star’s storyline and combat make it a great title for fans of the Fate franchise but even for a Musou title the repetitive nature and monotonous feel of standard enemies and stages wears the joy down quickly, leaving it as a title that is best played in small bursts.
7