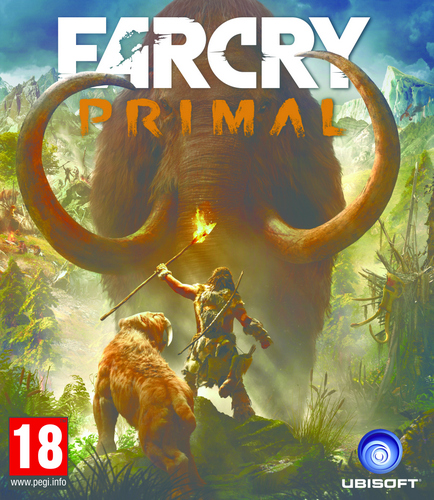 Far Cry Primal takes the series to a brand new setting rarely touched by modern gaming, the Mesolithic period. The clock gets cranked back to 10,000 BCE in Central Europe where three tribes of humans are moving into the fictional Oros Valley to take advantage of the lush environment previously hidden away by the glaciers during the last ice age. Here, our hero Takkar will rise from a lowly hunter to become the Beast Master and save the Wenja tribe from destruction. 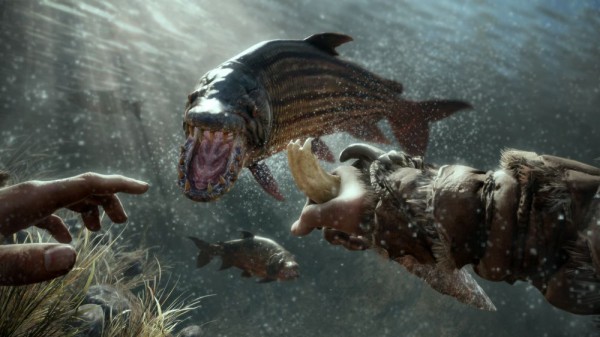 Upon hearing that the writers at Ubisoft Montreal brought anthropologists from University of McGill and linguists from the University of Kentucky to create a Far Cry game set in the Mesolithic, the nerd in me became really excited. Archaeology is one of those fields that really get butchered in popular media, such as our favourite bull whip wielding professor Indiana Jones and the tomb raiding antiquarian Lara Croft. So the thought of playing in a time period I have spent hours studying was a pretty enticing proposition. While no one expects a 100% realistic setting as it would make for dull gameplay, I have to say Ubisoft Montreal did a pretty good job bringing the Mesolithic to life. The most obvious ting is the complete lack of English in the game. Instead, all of the lines are spoken in a form of Proto-Indo-European language developed specially for the game. Then there are smaller touches that most people are likely to miss, like the fact that each tribe speaks a slightly different dialect or that the villages reflect the egalitarian social structure of the time. It all adds up to an incredibly immersive world that really deserves to be experience. 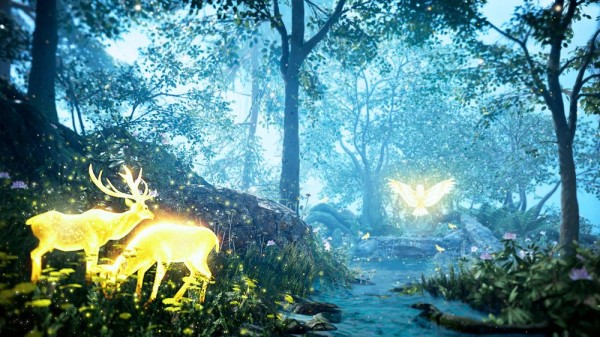 On the flip side, the game’s plot is pretty bland. Three tribes have begun settling in Oros, the brutish Udam, the fire worshipping Izila, and the scattered Wenja. After being repeatedly raided by both the Udam and the Izila, the Wenja are scattered across the land and are about to disappear. A group of Wenja hunters from the Wenja homeland are attacked on their way to Oros, leaving Takkar as the only survivor. Once in Oros, he finds Sayla, a forager likely plagued with post-traumatic stress disorder after witnessing the slaughter of many Wenja at the hands of the Udam. Starting with Sayla, Takkar begins gathering the scattered Wenja in a new village as they head towards the inevitable war with the Udam and the Izila. Unfortunately, the overall plot is pretty boring and predictable, which is worsened by the fact the main plot line is pretty short to begin with. 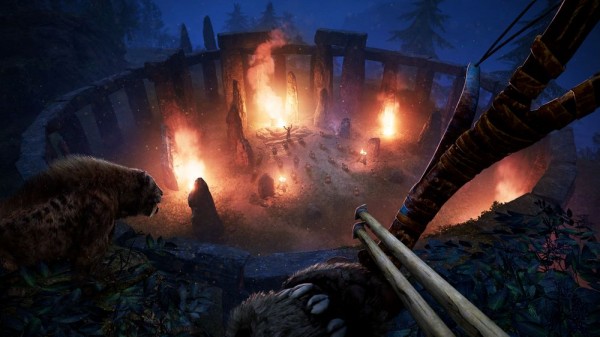 Far Cry Primal is built on top of Far Cry 4. There is quite a bit of recycling going on, with things like the wildlife and the overall map getting a prehistoric make over to fit the setting. At the same time, there are some major mechanical changes. The village is the central focus of the game. This little corner of Oros serves as the only hub for main missions and its growth is directly tied to Takkar’s growth as a character. The hunter-gatherer lifestyle is heavily emphasized in the game, which means Takkar will need to gather all the materials to upgrade huts in the village, improve his gear, and make new tools; no money involved. As the village grows, the Wenja tribe members will pitch into the effort, depositing more and more resources into Takkar’s cache as their population swells. Takkar’s skills and equipment are tied to specific villagers in the game. Once a villager is brought back, they will unlock most if not all of their associated skill tree and some equipment recipes for Takkar. I really like this villager system. Although it isn’t much difference in practice from Far Cry 4 skill tree and equipment crafting, there is a stronger attachment to the village and its occupants because of how Far Cry Primal handles things. 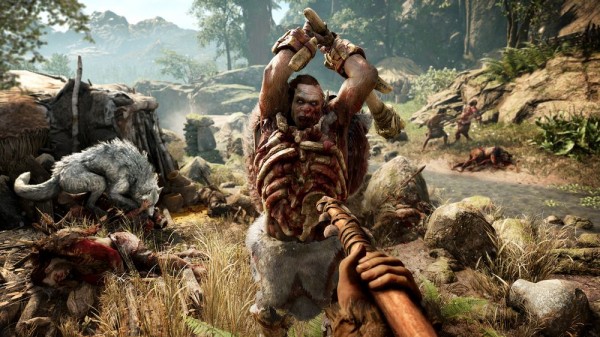 One of the biggest changes to Far Cry Primal is the weapons, as guns are a definite no go. The ever popular Far Cry bow makes its return, but instead of one single bow repeatedly upgraded over time, we get three different bows, each filling a specific purpose. Melee combat plays a much larger role in the game, with a variety of clubs and spears to smash or stab enemies with. Takkar carries stacks of arrows, clubs, and spears, providing him plenty of ammunition to rain down arrows from a distance, hurl spears as he closes the gap, bash in heads with his club in melee combat, and then toss a few clubs at the enemy as a last ditch weapon while he beats a hasty escape. The grenades are a little low tech, but they work the same for the most part. The weapons are balanced well, though the melee system is a pretty simple affair. 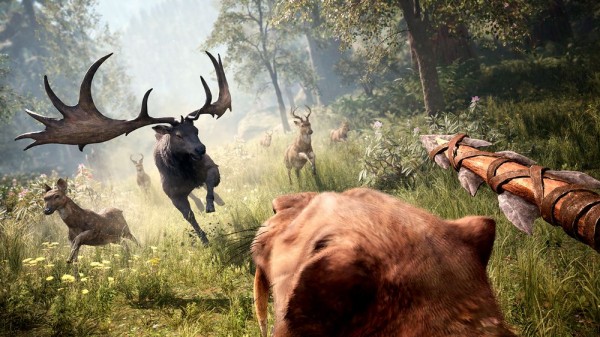 The Beast Master skills provide Takkar with a companion that helps balance the difficulty a bit, especially for melee players. Different wild animals can be tamed, with each species having different stats and special abilities. I found some of the resource collection abilities were a bit flaky at times, but it really isn’t an actual problem in practice, as those animals tend to be low tier creatures that don’t see much use. Takkar actually has two companions, an owl that can scout ahead of Takkar and attack the enemy to loosen up resistance and some sort of land-based animal that will follow Takkar around. The animals are fed meat to keep their health up and can be revived with a piece of meat during a short window after the beast initially goes down or with some red leaves from the Beast menu. 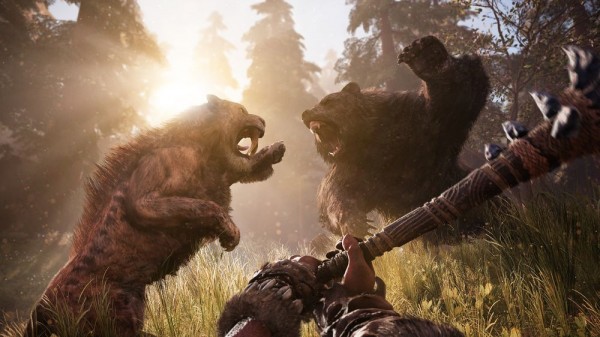 The A.I. is pretty good in Far Cry Primal, which makes it all the more jarring when it goes wrong. Human enemies will make an attempt to flank you and they tend to work together rather well. The animal kingdom behaves realistically, and it’s quite amazing to just crouch quietly in a bush watch a pack of wolves chase down their prey. Unfortunately, the A.I. has some pathing issues at times, causing animals to look dumbly at Takkar when he’s perched on a boulder or NPCs to run into tree trunks. The A.I. glitches aren’t that common, but they do happen from time to time. 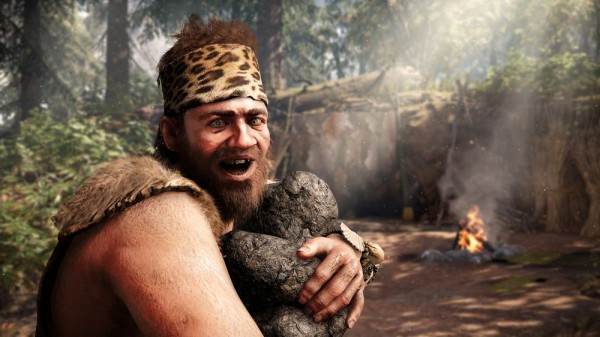 The controls are mostly the same as Far Cry 4 with the addition of melee combat. It is definitely a case of if it ain’t broke, don’t fix it, as the controls are easy to use and intuitive. The melee is very simple, as tapping the attack button triggers a light attack and holding down the button winds up for a hard attack. The only beef I have with the controls is the fact you need to zoom in before commands can be issued to the pet, which makes issuing commands in a frantic melee quite annoying.

Far Cry Primal is a great game, but it is short. There are only a small handful of real story missions, with the other main missions feeling like filler thrown in to pad the game’s length. Add the usual array of open world side quests and Far Cry Primal starts to feel like it began its life as an expansion pack that was turned into a full retail release at the last minute. 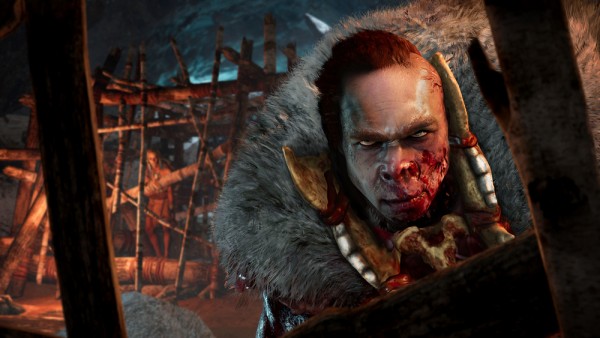 Far Cry Primal uses the same engine as Far Cry 4, which has aged very well. The world is bright, colourful, and lush with life. The animations are excellent for the most part, though feeding pets is a very obvious exception. Often times the meat will clip or miss the animal’s mouth completely. Since Far Cry 4 was built with last generation consoles in mind, the hardware requirements on the PC aren’t too taxing. The game ran smoothly, though the FPS tends to get butchered during cut scenes.

The audio in Far Cry Primal is excellent. The sound effects are spot on. The music fits the Mesolithic setting well with heavy use of drums and chanting. The voice acting is spectacular. The actors do a great job of channeling their performance, even though they are speaking in a partially made up language. 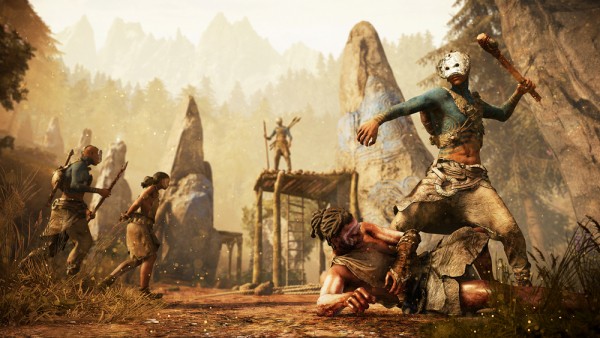 Far Cry Primal is a great game that is way too short. It boasts a well crafted setting, enjoyable gameplay, solid audio, and strong visuals, but it’s hard to shake off the price tag for what amounts to a handful of real story missions and a ton of filler. Visit Oros for the story, stay for the atmosphere.

Far Cry Primal is a short, but wonderful experience that probably should not have been priced as a full console release.
7.5