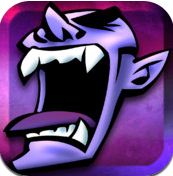 Love vampires but hate Twilight? Are you a fan of gore and humour? What do you prefer; big guns or bigger guns? Depending on how you answered Fangz might be the game for you! 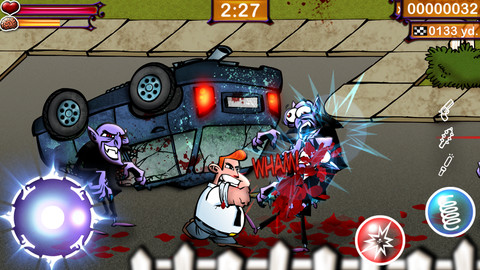 The story is very basic, very simple, almost non-existent; you’re Frank and basically you’re “just a guy” who’s found himself in this Vampire Apocalypse who’s looking for his family and really just trying to survive. It’s generic and simple but you really don’t play this game for the story, the story is just there as a set-up for what the game has in store. Really the only thing that is constant, story-wise, would be the quirky characters you meet along the way, mostly end up being enemies to kill or bosses to fight anyway but add comedic value to the game and makes you want to actually read the crappy dialogue in every tiny cut-scene, and the little premise for each level like having to look for your family in a certain area or having to kill a particular vampire to do a particular thing. Simple stuff that really doesn’t take away from the game at all, it’s just kind of there and it suits. 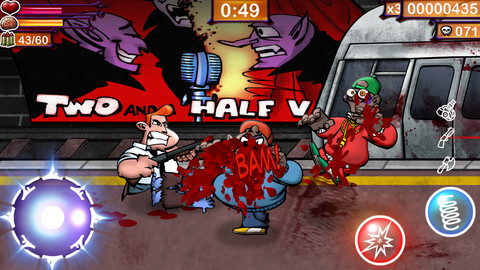 These are great, very vibrant, very colourful, very quirky but, I found, too cluttered. I love games that have their own style and this is one of them. The way that the devs mixed the old-school, cartoon-style vibe with the gore of blowing a Vamps head off with a shotgun was extremely effective because both added and took away something from the other; the childish colours and style mad this game feel nice, like you weren’t playing this game for any other reason apart from “I’m gonna just muck around with this game” and the blood and guts made it so you wanted to continue playing the game because even though you’ve been killed 8 times seeing their entrails blown out of their stomachs gave you some real satisfaction. All the characters and enemies are drawn and animated well and very stylized each with their comedic and annoying perks. Not only were the enemies good but Frank himself was probably the quirkiest of all, let me give you one example; Frank is a heavy set man, as you run and begin to fight he has his teeth clenched and is looking pretty angry but as you continue running and fighting he stars to breath heavy, it’s just something small that adds up to something big in the grand scheme of this game. Now to the part I found troubling: Although the actual gameplay visuals, like the health bar and the jump and shoot buttons, looked nice and is well suited I found it to really clutter up the game. I found myself covering a great deal of the screen just using my thumbs to actually hit the buttons. Now I DID review this on the iPhone and while doing so I couldn’t help but think that this game would be better played on the iPad considering it has a bigger screen and would be more stretched out in terms of clutter. One thing I was a bit disappointed with is that Frank never changed, even after making use of the upgrade and level up systems within the game, visually he stayed the same ‘ol Frank. 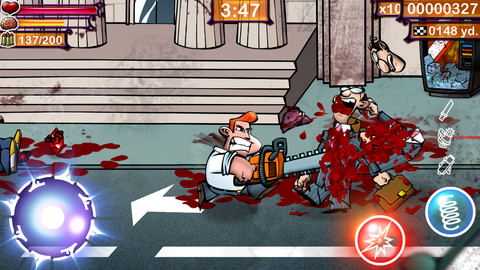 The Audio is exactly what you expect from a game like this; the music varies depending on that stage you’re in and what enemies you’re fighting and is kind of standard to say the least. It does a good job at mixing it up, I’ll use the first two levels as an example; during the first level you’re in suburbia just kind of figuring out what’s what and getting your feet set firmly on the ground so the music is very much like a tip-toe, great use of xylophone I have to say,  and it makes you feel a bit weary and anxious. Now in the second level you’re based in the inner city and you’re most fought enemies are Vampire Rappers so as you could image the music is very Hip-Hop, RnB sounding and, once again, it suits well.

The gameplay is your standard side-scrolling, shoot em ups (Beat em ups) that has you put up against hordes and hordes of vampires of different sizes and types (original, female, midget, rappers, mums, etc). Initially you are given three weapons; a pistol, a shotgun and a baseball bat, pretty standard, and you can switch between them mid-fight, this was cool until they become obsolete and that’s pretty early on, luckily the weapons and Frank himself can be upgraded using money and skill points from leveling up which, obviously, you do by killing Vamps. You’ll find yourself level grinding a bunch in this game and it does get hard, it’s not so much that the enemies are hard it’s more so that you have a whole lot of leveling up choices. I chose to level up Franks stamina, speed, power and his starting weapons and I still found it very hard to complete a level without rushing and getting frustrated. Another thing you will find is that each level has a timer and most of the time a big horde has to be taken down before you can resume traveling through the level, THIS can get frustrating. There are a whole bunch of weapons to unlock and upgrade from a Katana to a Laser Canon so there’s plenty to choose from. 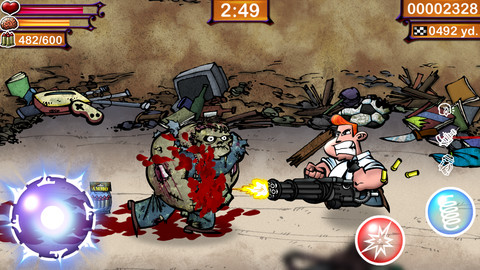 This game is great if you want to kill some time or just play something in between doing other things. It’s great and it can get really addictive yet at the same time it can get extremely frustrating. There really isn’t anything wrong with this game, at least nothing big enough to give i crap for. It’s just your typical, well-rounded, iOS game that you’ll go back and forth with; playing it all day one day, then not for a week, then a little bit on the train, then maybe all day again. It’s cheap and it’s good fun so if you’re looking for a game you can muck around with go and grab yourself Fangz