Endless runner apps are quite popular in the App store, and for good reason. They’re fun, quick and an easy solve to a spell of boredom. In order to set an app apart from the others the app needs to be well designed, easy to learn but hard to master, and have that special little quality that sets itself apart from the rest of the pack. Escape from Age of Monsters is the second in the Age of Monsters series, and the big question is – is this the kind of app that you’ll keep on your iOS device, or is this something that leave an impression?

The controls for Escape are, like most endless runners, quite simple. You are a hero who controls two different coloured gloves, a red and blue one, which are capable of breaking walls and taking down monsters. The things you have to take down are colour coded, so quick reactions are required as you choose which glove to take down the obstacles that face you. Picking which glove to use is as simple as left or right corner of the screen. These obstacles are randomly generated, so you can’t simply learn the pattern of the levels. Other than that, the only other controls you will need is swiping for bonuses. Bonuses can be point multipliers or coins, which can be used to buy items such as an extra life. 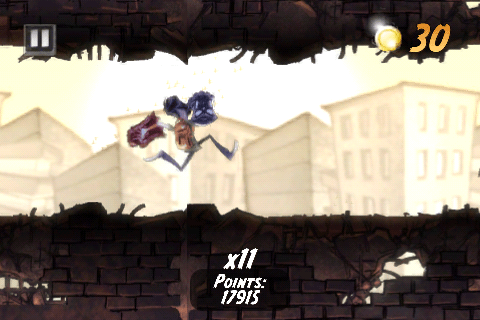 Each level is a different building, which you storm through with monsters snapping at your heels. The obstacles change according to which building you are in, and each level transfer happens in a pretty sweet building leap. You gotta feel sorry for this guy, he’s just continuously being chased down despite all of his kickass building leaps. 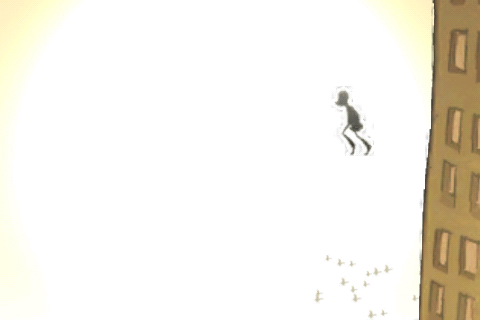 You have three lives, with two of them being represented by young children tagging along at your heels. Whenever you miss hitting an obstacle and end up having the monsters catching up with you, they snack on one of your kids, until they’ve run out of bite-sized appetisers and move onto the main course. The main course being you. It is a little disturbing that you sacrifice small children to survive, not really what I’d say heroes are made out of, but that’s the sort of different humour that this app contains. 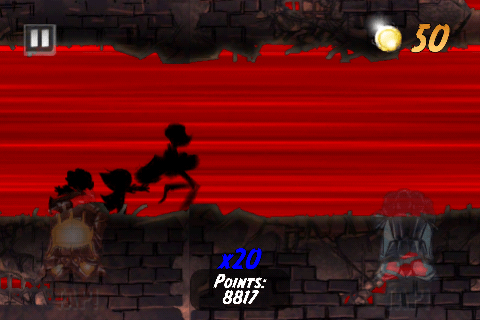 This app can lead to something like what is often experienced in Guitar Hero, you go into a trance where everything goes well, until you suffer from a brain freeze and all of a sudden everything falls apart. That isn’t a negative reflection on the app at all, just a warning to those of you who haven’t got a great attention span or the quickest reactions. 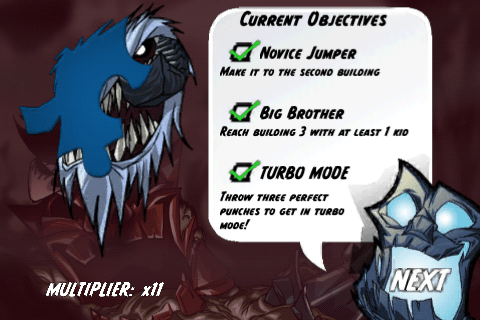 You will also need to get the timing down, as a ‘perfect’ strike will afford you double points, as well as three in a row giving you Turbo mode. In Turbo mode you get even more points and the longer you can stay in it by continuing to make perfect punches.

There are objectives to be completed, such as achieving a certain amount of perfect punches, or getting past certain bosses. Finishing these objectives allow you to gain items that can be used in your gloves Stash House. 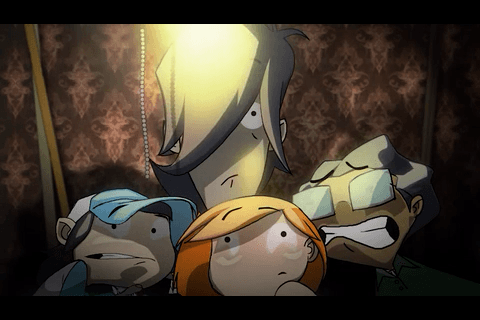 The graphic stylings of the game are something that I’m a little in love with. They’re quirky, fun, and colourful and sort of remind me of Scott Pilgrim vs the World. Which, considering that it’s an app about running away from legions of monsters, is a great little stylistic contrast.

It manages to pull off both creepy looking and cartoon-y monsters, so those little ones won’t get too freaked out. The graphics are definitely one of the things that make the app stand out from other endless runners. 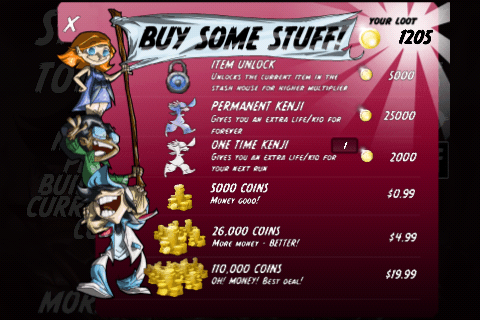 The game says that it is better with headphones in, but unless you want to burst your eardrums with guitars rocking out, or monsters growling at you, you probably won’t need them. The soundtrack is a pretty kick ass rock track and it keeps you all pumped up for your monster escaping goodness.

Escape from the Age of Monsters is a fun little endless runner app, with a cool quirky twist. The controls are easy to learn, with the levels becoming increasingly more difficult and offering enough of a challenge to keep you interested. The humour and stylised graphics of the app are, what I believe, most sets it apart from what is usually seen in endless runner games.

This is an entertaining, and cool, little app and I believe it’ll make a fine addition to anyone’s iOS device.