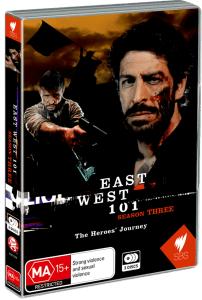 When it comes to Australian film and television, I will be the first to admit that the calibre should be higher. I have been countlessly disappointed time and time again by series made Down Under, which I suppose accounts for my lack of trust when it comes to a new Australian show…actually, it’s more surprising to me if a homegrown show is good than if it is bad.

It’s safe to say, then, that my expectations of Australian television are very minimal. Upon initially picking up East West 101, it’s hard to say if I had any expectations other than “I’m not going to enjoy this”. However, whether it was my expectations or the quality of the show itself, I found myself genuinely surprised by this series – in fact, I even found myself enjoying it. From the fast-paced action to a visual style I would not anticipate from a crime show, it seems that East West 101 Season Three has exceeded my expectations in more than one sense.

If there is one piece of information that sums up East West 101, it’s that it takes a very new stance on a television series which wouldn’t ordinarily be covered in Australian television. From the first season, the show not only deals with issues of crime and terrorism, but also the conflict of religion in a time where Muslims are largely discriminated against around the world. 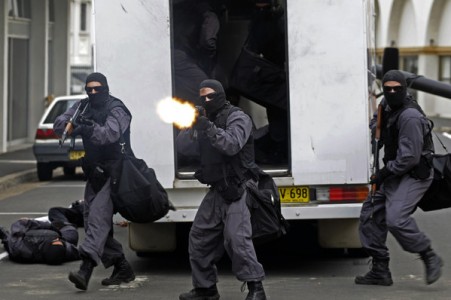 And so Season Three begins…

In Season Three, there is a 36 million dollar armed robbery that occurs on the road in Sydney. As a result, men wind up dead and, around the same time, there are murders of 17 people in Afghanistan. Who committed the crime and who murdered the people in Afghanistan? Is this the work of terrorists, or is there something more sinister afoot? Are the two, in fact, inextricably linked? The Major Crime Squad investigates this mystery, but while investigating the crime becomes personal for Detective Zane Malik (Don Hany).

I suppose the overarching concept of the series is what threw me off from my “this is terrible Australian television” frame of mind. Australia’s television is often so caught up in the nets of suburbia and in the drama genre (a la Home and Away and Neighbours) that it was surprising to see something that didn’t conform to the moulds of television. Instead, East West 101 Season 3 really deals with the suburban, family side of Australia without compromising action and originality and presented a show that was familiar and fresh at the same time. The show – and this season in particular – deals with the hardships of stereotypes in society as well as the hardships of the home. The other great thing was that anyone could jump straight into the series without any prior knowledge and feel just as taken in by the narrative without any back story. In fact, as far as I’m concerned, with a few tweaks the first episode of Season Three could have been a modified pilot episode.

The characters in the third season really show a strong amount of personal development – largely due to how close to home the crime ends up becoming. In fact, the title of Season Three – and the name of the first episode in the season – is “The Heroes’ Journey”, which is a clear indicator that the show will deal with the exposure of the man beneath the title of ‘hero’. 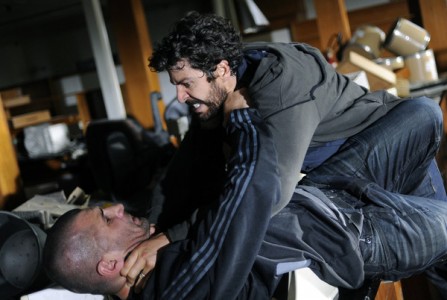 Detective Zane Malik…he’s a bit of an intense fellow.

The main character throughout the series is Detective Zane Malik, a Muslim who has overcome conflict within the Major Crime Squad and settled in as a respected detective. He works alongside Inspector Patricia Wright (Susie Porter), Detective Sonny Koa (Aaron Fa’aoso), Detective Helen Callas (Daniela Farinacci), Constable Jung Lim (Renee Lim) and Detective Neil Travis (Matthew Nable). All of the characters, aside from Neil Travis, have been with the show from the beginning and Travis joined in Season Three.

Throughout this season, I’d have to say that Malik grew on me. I’ve often found him to be irritating and slightly bogan – although in Australian television, everyone sounds like a bogan – but as his character grew and developed with the personal circumstances I’d have to say he became more respectable, particularly in this season. However, sometimes I really felt as though Hany’s acting was contrived and slightly too exaggerated at times. Perhaps this was a result of the high focus on emotional drama within his character’s life, but when someone’s screams of anguish sound like a crazy 30-year-old man who just hit his foot, there’s something wrong.

Aside from Malik (and Travis, but he was just irritating overall), I found I actually loved the rest of the characters. Lim was a great comedic relief from some of the tense action, and Wright was really the stand out female character for me: she’s an unwavering voice of reason and Porter’s acting was genuinely believable. With all that being sad, the best character throughout the entire series – and even more so in the third season – is Sonny Koa. He’s like that cool big brother or friend you wish you had; he says very little, but exudes awesomeness and always has your back when you need it, and his character really was expanded upon as he was faced with the confrontation of personal dilemmas within the season.

But, no matter how intriguing the plot or how likeable the characters, I’d have to say that the number one standout aspect of East West 101 Season Three is still its visuals. From the very first episode of Season One, the series has established itself as a forerunner for cinematography in Australian police drama, and the visuals in this season are brilliant. There is almost a CSI style of mystery to a lot of the film’s visuals, and the action scenes are littered with fast-paced shots to make up for the lack of budget that the series has. With that being said, the special effects were not as impressive and it was evident that they were just that: effects. 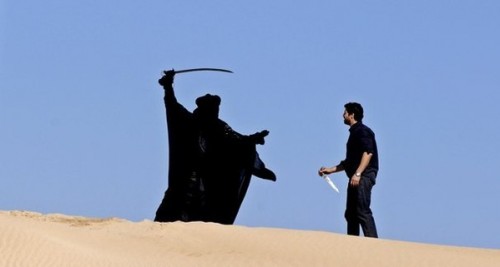 In terms of soundtrack and audio, I found East West 101 Season Three to be average: nothing bad, but nothing that truly stood out. The sound effects were fine, the soundtrack was fine, and everything was just…fine. Unlike the visual elements, I could find nothing that amazed me in the soundtrack. East West 101 Season Three did, however, manage to mesh up the audio to suit the visual quite nicely, and there were moments of silence that truly rang out and complemented what was happening on screen – in the end, that’s all you can really ask for with audio, especially for a show that focuses more upon its cinematography.

The DVD comes with a whole 20 minutes of behind the scenes footage…yeah. It’s a let-down. I thought with how visually and narratively rich the footage was throughout the season, there would have been more extras available on DVD to whet the appetite. But alas, to no avail: the ‘behind the scenes’ feature is really just the standard stuff you would expect. There’s nothing to get excited about, but at least SBS threw in something for those who bought the season.

Overall, I’d have to say I was genuinely surprised and impressed by East West 101 Season Three. The series continues its great visual legacy while adding to the wonderful foundations of narrative and character that Season One and Two laid out. East West 101 Season Three is great for both veterans and newbies to the series, and it is definitely worth checking out at least one episode…but chances are, you’ll watch the entire thing, just like me.

I give East West 101 Season Three