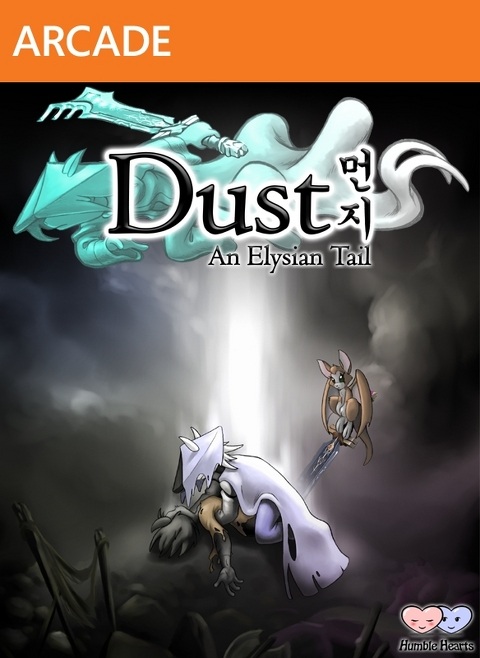 Overview:
Practically every major video game that is released to the public, either physically or digitally, is the product of hard work by a studio full of people. However what happens when one man with a lot of ambition decides to make a game of his own? Well, most of these one man projects either become small favorites for a time or are barely given the time of day.

What began as a beautiful looking indie game shown off to the public back in 2009 has spent three more years in development, becoming much more impressive than its original showing.  Now, Humble Hearts and Dean Dodrill are ready to release Dust: An Elysian Tail to the public and with it, they will be ushering in a new level of quality rarely seen on the Xbox Live Arcade.

Story:
Players take on the role of a young fox-like man who has lost all memory of who he was, including his name. This mysterious man suddenly meets with a magical talking sword and a flying creature named Fidget who was tasked with guarding the sword. The sword, the Blade of Ahrah as it is called, informs this man that his name is Dust, as such Dust ventures forth on a quest to answer multiple questions, such as who he is, why this magical talking sword has come to him and who has unleashed so many monsters upon the world. 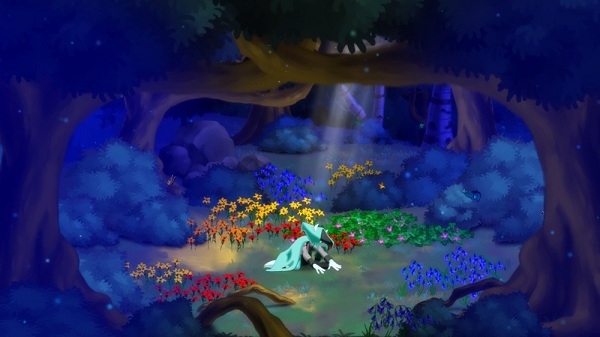 While the basic storyline of Elysian Tail may not be your most original sounding at first, the way that it is handled is impressive as Dust slowly begins to find out details about his past while trying to save the innocents of the world from an overwhelming force destroying the land and wreaking havoc. Thanks to the compelling way that the storyline is handled and the likable cast of characters, players will quickly find themselves invested in An Elysian Tail’s storyline and eager to learn more about our mysterious protagonist and his fate.

Visuals:
While great visuals don’t always equal a great game, if they did then the visual splendor that is Dust: An Elysian Tail would be a shoo-in for Game of the Year. Dust: An Elysian Tail will likely awe the player the first time they start moving through the land as not only does the title feature a vibrant color scheme that looks absolutely amazing on television screen, but the amount of detail in most areas is quite stunning. In fact, describing the environments within An Elysian Tail as beautiful is an understatement. 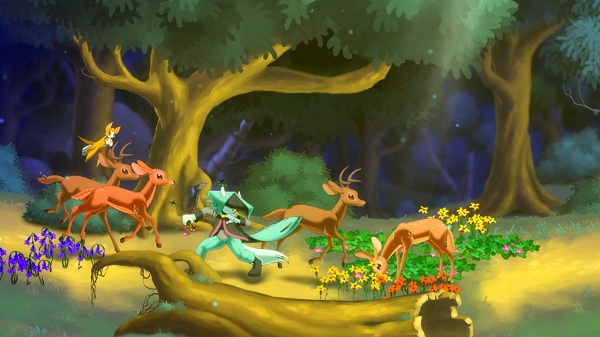 To make things even more impressive, the environments the player traverses while playing Elysian Tail are well varied and range from snowy wonderlands to underground caves. Both characters and enemies alike are given high levels of detail and design and anytime the player speaks to another character they are treated to a beautifully animated representation of the character they are speaking with.

Audio:
To go along with the impressive visuals that Dust: An Elysian Tail shows off at every turn, the title also features an impressive soundtrack with absolutely gorgeous background music to accompany the scenery the player is walking through. Unfortunately when it comes to the title’s voice acting, things become a bit hit and miss with some characters, such as Dust and Fidget voiced well enough, to rather poorly handled characters that can be grating to listen to.

Gameplay:
At its core Dust: An Elysian Tail is a side-scrolling action platformer that sees the player venturing through an environment that is broken up into “rooms” that the player will pass through as they make their way to their objective. It is worth noting that exploration is key in Elysian Tail and along the way through most areas, the player will encounter various obstacles that they simply cannot pass at that given time. These obstacles include small tunnels too tiny to crawl through, vines, high cliffs and more. 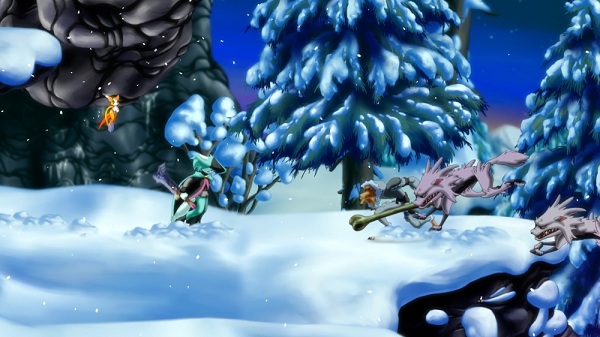 Only upon acquiring various abilities later in the game can the player pass these obstacles and usually find the goodies hidden behind them in the form of keys, locked treasure chests bursting with money and equipment and even some interesting character cameos from other XBLA games. The use of this mechanic may force the player to backtrack, but it is a tactic often used in other action platformers such as Castlevania and Elysian Tail never makes these obstacles feel like a chore to surpass.

As the player ventures through the environment they will often have to complete various platforming sections which are well designed and I never encountered a frustrating section, even when hazards such as spikes and avalanches were introduced. Most jumps, even hidden jumps which reward the player with treasures, can be accomplished with minor planning, allowing a fast and fluid experience. Things get more hectic however when you factor in the amount of enemies you will have to be taking on. 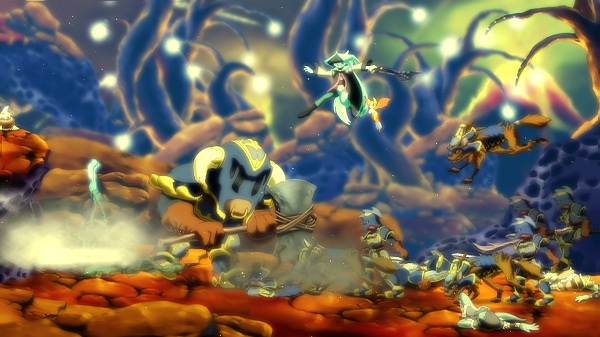 As you venture from area to area the player will run into a large amount of enemies, with a gradual incline in enemy difficult and amount as the player progresses. Eventually the player will be battling against massive amounts of enemies while pulling off some crazy high combo numbers with the title’s fluid and fast paced combat system.

When Dust first gains his sword he only knows a few basic attacks and combinations, however he quickly gains the ability to pull off most of the offensive moves the player will be using for the rest of the game. Basic sword attacks can be performed with X and Y while dodging is handled by the shoulder buttons or right joystick. One of the most useful moves in Dust’s repertoire is his Dust Storm ability which allows him to twirl his sword so fast it starts to create a whirlwind. Eventually the player can even perform this attack in mid-air, allowing Dust to slice through enemies like a whirlwind. 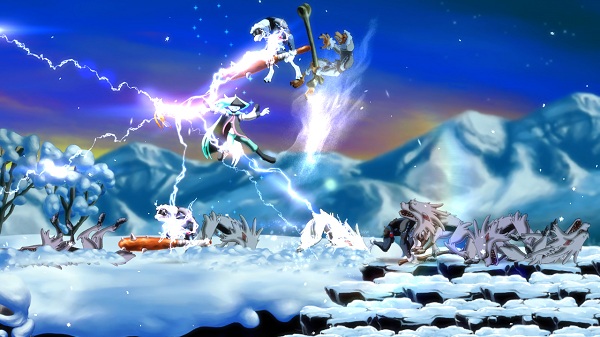 Combat gets even faster paced when Dust works with his partner Fidget. Fidget, the nimbat, happens to possess some magical abilities and players will be able to use her magic in combination with the Dust Storm to cause massive amounts of damage to enemies by not only multiplying her magical projectiles (with later abilities creating giant fire pillars and electric storms) but enhancing their damage greatly.

The entire time the player takes on the many opponents they face, the game never feels like it is going to overwhelm the player. Maybe this can be contributed to the outstanding visuals of the title but taking down massive amounts of enemies with a high hit count while only receiving minimal to no damage will provide the player with a rush unlike they’ve felt in a game of the same type. This feeling is accentuated thanks to the fact that everything just seems to flow together perfectly with tight combat, impressive visuals and outstanding combo system. 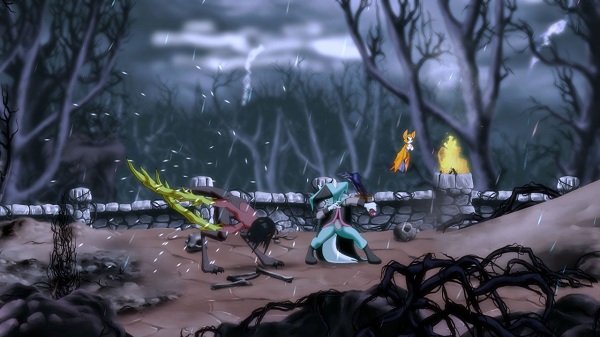 That being said, An Elysian Tail can become a bit repetitive in some areas and even a bit easier as the game goes on, as players can easily over level Dust from the experience points gained from kills and high combo counts. Add this together with the fact that crafting equipment from discovered blueprints is easy to perform at any given time, and some challenge is removed from the title, even on some of the harder difficulties. This is especially true once the player finds a combo that works well for them or any specific enemy, allowing for their quick departure every time.

Overall:
Dust: An Elysian Tail is the sort of game that only comes around every so often. It combines excellent, though slightly repetitive, combat mechanics with fluid and enjoyable platforming all while providing players with the most beautiful visual presentation possible. To top it off, while An Elysian Tail can be completed in around nine hours, there are plenty of side-quests, challenge arenas and other secrets to discover that will expand players’ game time beyond what one would expect for a digital game. In the end, Dust: An Elysian Tail is a must-have game and is a perfect example of what an action platformer should be like.