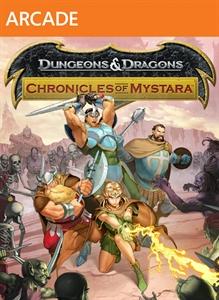 Overview
Arcades have been making revivals as of late, and while the boom is still rather broken up and isolated, many have been craving to get their hands on those classics of yore – looking to game publishers for their fix. Capcom of course know a thing or two about making classic quarter munchers, and have bundled together Dungeons & Dragons: Tower of Doom and Dungeons & Dragons: Shadow over Mystara into one digital package, appropriately titled Dungeons & Dragons: Chronicles of Mystara. Now, unless you are an importer, there is a good chance you have missed out on these classics or have yet to play one of the most overlooked arcade duos to date. This little collection is here to fix that, but does it bring back good memories, or have these two titles aged far beyond repair? Let’s find out.

Story
I am honestly surprised I am even writing a story portion to this review – as normally, beat-em ups are very light on dialogue, offering a small plotline of “save this!” as incentive to get the player to continue on. Dungeons & Dragons: Chronicles of Mystara has two titles jam-packed with story however, putting players into the roles of four to six heroes that all have special abilities as a Dungeon Master of sorts delivers options for forking paths and multiple outcomes to overcome along the way. 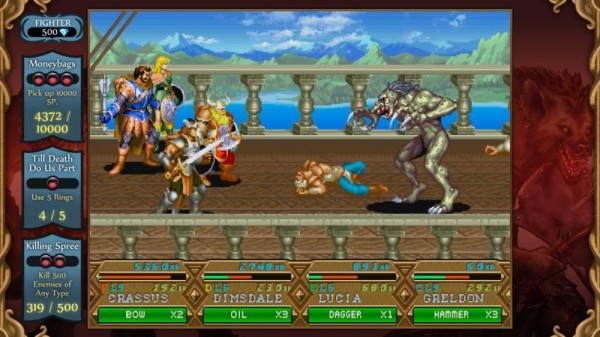 Dungeons & Dragons: Tower of Doom – the first in the series, features a Cleric, Elf, Fighter, and a Cleric coming together to take on an evil sorcerer. Sure, it isn’t much – but the way the story is told makes it feel like a much grander experience, with elements taken from the original Dungeons & Dragons coming in play during several levels to set the mood. For instance, and the finish of many stages, the player will have a choice to take a longer path that is safe, or take a short road that features more danger. The sequel, Dungeons & Dragons: Shadow over Mystara directly continues the plot with the addition of the Thief and the Magic User, but adds much more with more meaningful choices and outcomes. These choices include allowing the player to take time out to save a gnome in need, or to take on one evil threat over the next. Sure, it is rather generic fantasy fare, but I was into the plot throughout both games due to the role-playing feel that these two titles have, and while Shadows over Mystara comes with more depth and greater replay value, both are perfect for hardcore D&D fans and newbies to the franchise alike.

Gameplay
We hear the word “role-playing” attached to many genres these days – as if adding the term to a box adds some kind of credibility. Sports games now use it, as well as first-person shooters, fighting titles, and so-on, so it can be hard to tell just how much of an RPG a game actually is based on looks alone. These two 90’s classics are based on D&D though, so players are already promised some role-playing on that alone, with the side scrolling beat-em up fare fronting the gameplay experience to make one very unique pair of titles. Unfortunately, there is far less of these elements found within Tower of Doom, but that doesn’t harm the experience. 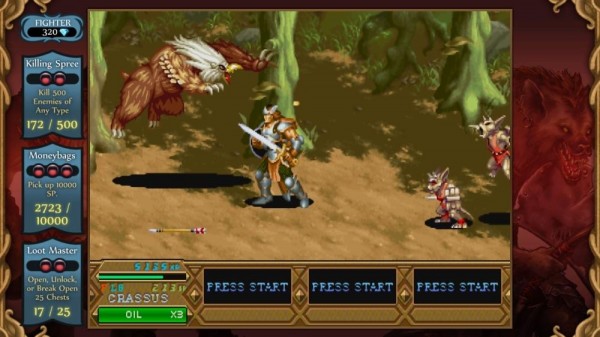 Players start out by selecting a character within Tower of Doom, and will be tasked with a different quest of sorts with each stage. Trolls, goblins, and other fantasy-stylized foes run a muck, so you must seek your sword or bow to attack. Now, this is a beat-em up at heart, so that feel is still in full effect, bringing the the player a simplistic arsenal of button-mashing techniques to take down their enemies with. In addition to the combat however comes loot. After you smash a foe, gold, oil, and other goods are dropped that can be picked up on the fly. Gold can be used to purchase throwing daggers, hammers, and axes, as well as potions and other items that offer some much needed assistance during the more intense sections of combat from a merchant that appears during specific stages. While traversing a level, the player can hit the top face button to change their special ability, allowing them to throw flaming bottles of oil, use a magic attack, or chuck an arrow or dagger at opponents from a distance.

While it is pretty basic, these mechanics come well-oiled with a tight control scheme in tow, meaning that the arcade emulation was left relatively untouched and all of the gameplay is as smooth as it was in the arcades. The balancing act comes in during multiplayer, where up to four can go out on this epic quest together. You see, each character – despite playing similar to the next, features their own unique playstyle that balances the weaknesses of others. The Fighter is equipped with powerful attacks and the most HP, the Elf has speed on her side and can cast spells at the tap of a button to take out multiple targets at once, the Cleric has healing abilities as well as some defensive abilities, and the Dwarf is able to chain together combos and has great strength. 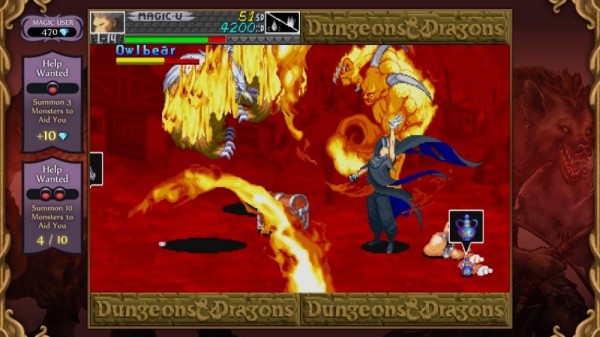 Dungeons & Dragons: Shadow over Mystara was quite a sequel as it adds a ton to the experience and brings us one of the first examples of an “ability wheel” that can be used to easily access a great number of special attacks and extra weaponry. Instead of just tapping a button and waiting for the appropriate action to come up, the player can bring up the wheel and select a spell or item to use while in combat. The downside of this is that your character is vulnerable during this state, so it must be used with quickness in order to not be harmed with a foe’s attack. Shadow over Mystara also features two new character classes that bring some further substance to the table, which are the Thief (who specializes at looting and is as quick as a cat) and the Magic User (the most powerful character in the game, featuring devastating spells at the cost of defense), along with small upgrades the the previous quartet of heroes. 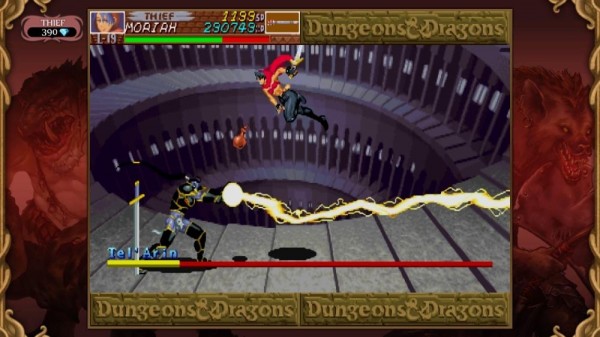 The combat has changed for the better, with far more upgrades and experience to be gained during the course of the game. Much like we see in titles such as Street Fighter, special moves can be performed with a combination of quick button inputs. We don’t always see these kind of techniques outside of fighting titles, but in these two titles – their presence is more than welcome as they alone help to keep the game’s combat from ever coming off as repetitive or boring. By selecting the combat wheel more than once, extra options also appear to allow the player to access a greater movepool. For example, the Elf (my character of choice) has one wheel for magic, one for abilities such as invisibility, and one to access her bow and other pick-up weapons found as loot. Sure, Tower of Doom had enough to come off as an enjoyable beat-em up, but Shadow of Mystara took it one step further, adding a coat of polish and depth and arguably creating one of the most broad beat-em ups to date. 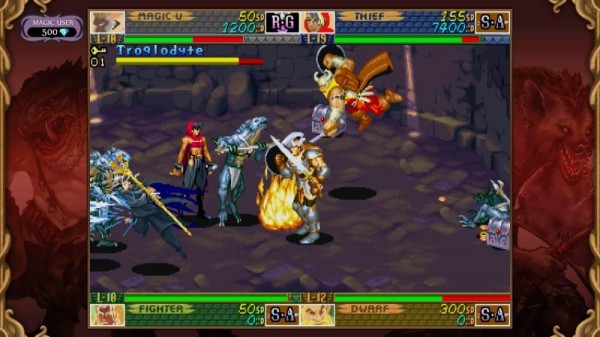 As the player runs the course of both games, the experience points gained and time spent with each character are tracked, with “Vault Points” coming off as a nice extra. After tackling challenges or just playing through each title, these points are awarded to the player and unlock special goodies such as a credit sequence, concept art for both games, and house rules that alter the difficulty to the player’s liking. Sure, it isn’t the most complex list of extras, but its something that both those looking for a challenge and completionists are sure to enjoy. Players can also hop online in a drop-in/drop-out format, and from what I played with a few others online, the servers seem to be rather stable with a seamless connection at all times.

Visuals and Audio
Like all ports of retro arcade classics, the visuals are what they are. By that I mean while the game is in “HD” so to speak, the hand-drawn art style is still in effect and is a bit dated by more modern beat-em ups such as Double Dragon Neon. That is not a bad thing in the least however, as Capcom were going for nostalgia and hit the mark by keeping both titles true to their original design. Even with the dated graphics, each character design features a good amount of detail, with worlds filled with color and a darker feel that fits in perfectly with the D&D universe. Animations are also top-shelf, as there is never any slowdown during combat, no matter how hectic or how many enemies are on the screen at once. If I had any gripe it would be that this port didn’t happen sooner, as my high opinion of the small compilation here would still be just as high due to the love and quality that went into the wonderful art design. 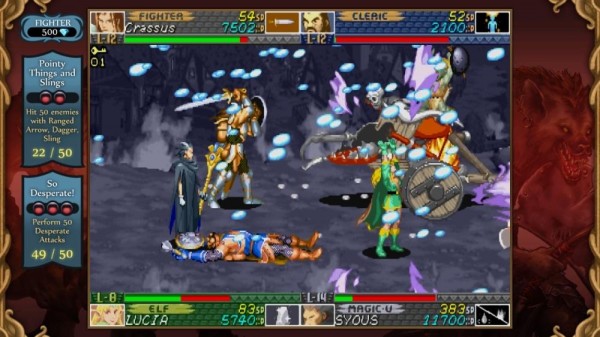 Soundtrack wise, Chronicles comes with two diverse sets of tunes that capture the fantasy setting well, but remain on track with other arcade classics that Capcom have releases over the years in terms of quality. Even with the great music – and trust me, most will love what they hear, I couldn’t help but respect the effort put into the sound effects. The character rosters have light voice-work, and while most of it is just grunts and spell chants, it is still enough to make each class feel distinct. Enemies and bosses also sound as different as they look, and considering the large variety of foes that are in both games and the age of each, you could easily say that this little franchise was ahead of its time back in the 90’s. Sound effects are equally pleasing, with bottles shattering across the ground as oil is cast, swords clanking as they slash down on enemies, and arrows whisking across the sky.

Overall
Dungeons & Dragons: Chronicles of Mystara may be one of Capcom’s best revivals to date. With a deep yet simplistic gameplay design attached to both arcade favorites – following the most famous role-playing game in history, Chronicles of Mystara brings with it a refreshing and unique take on two genres. Sure, we have seen these titles before, but having them both together, fully translated, and modernized with both extras and online drop-in/drop-out play makes for one incredible value that will keep any Elf busy for hours on end. Arcades may be a rarity, but Capcom have been doing wondrous things on consoles in the past few years for our old quarter-munching pastime. Dungeons & Dragons: Chronicles of Mystara is yet another sign that there is still more to come from the old cabinets of yore, rolling a D20 for both nostalgia and enjoyment in yet another high quality port.