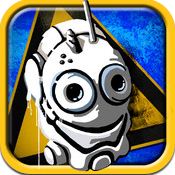 With the large amount of puzzle and strategy games out there on the market I tend to see myself begging new developers to please add more to a game than just plain, boring puzzles, they get old and they get boring and there are so many of them that now there’s an overpopulation, well, it seems like someone out there heard by metaphorical prayers and they went ahead and made Droidscape Basilica. While not being exactly the type of puzzle game that I enjoy, it is still a great game with a lot of lasting features. 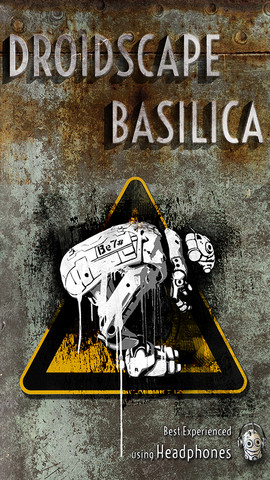 There actually is a story to this game even though it’s just an action-puzzle game. Basically the story revolves around a group of people that call themselves Chronomancers, they can control the flow of time. These Chronomancers were sought after and wiped out because of their incredible power, it was mostly due to jealousy and a religious group but let’s not get into that. Now there’s one left, that’s you, and he’s been taken into custody by the opposing force yet just before they locked him away he managed to sneak a remote control device into the cell, this remote control device controls the robot Bishop 7 who you will manuever through all the puzzles and obstacles throughout the game. The end game is that you guide this robot through all of the security and to your cell where he will set you free but considering the dev team havn’t finished creating levels; that may never happen. There is a rich story behind it, there are tribes who wear animal masks (I believe they are the Chronomancers), there are religious groups who dislike the mancers, there’s a war and it all took place in space. 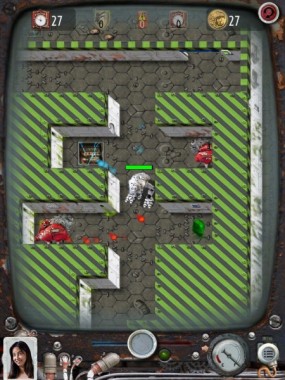 Now while there is this deep background story I have to take points away because the entirety of it is told in an opening cutscene which you can skip through just by tapping the screen. This cut scene pops up every time you start the game but I feel like it’s too skipable and it kind of rushes through what I think can be an incredible story. It tells such a vast history in no more than thirty seconds and I thought that was a bit of a wasted chance to bring more depth to this game. Droidscape Basilica needs some sort of easily-digestible, small comic that just explains more of the story. I know it’s just a puzzle game and half of you out there won’t even worry about the story but I just feel that if you’re going to do something do it as good as you possibly can because then all that is left is wasted potential. 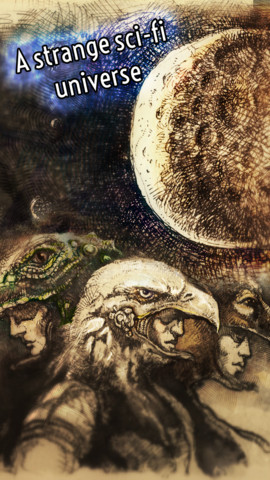 This game is quite nice when it comes to the visuals. I would say it’s nice to look at but it really isn’t…and that’s great! Your screen is meant to resemble the screen of the controller that you’re using from the jail cell so it’s rusted, it’s gritty, it’s dirty and it fits like a glove. The fact that all, or most, of the animation is actually done through “Stop motion animation” is incredible. It’s something that isn’t often done but it shows the amount of effort the development team put in and that;s admirable. It’s very rustic, very steampunk-ish and very suited to the game. 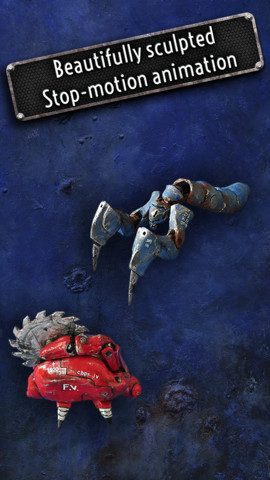 When starting the game there’s a little notice in the right-hand corner that says “better experienced with headphones” and they’re not wrong there, while playing the game without them is still real nice, playing with them is definitely the better alternative. You just hear a lot more of the environment and the entire game just seems so much more crisp and clear. The audio itself is nice on it’s own, apart from small things like the robot screaming when he is killed which was fairly annoying because it just added to your frustration when you can’t pass a level. The music is creepy and suspenseful, even though it’s the same track repeated most of the time I didn’t find myself getting annoyed because I was too busy concentrating on the actual level. 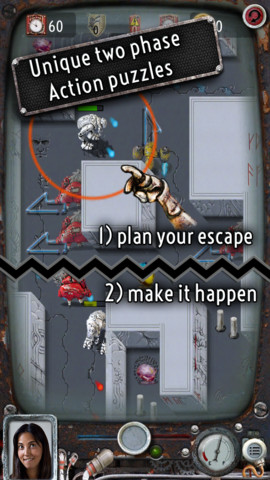 The gameplay works in two different parts but first let me explain the layout. It’s a birds eye view of the entire stage where you can see obstacles and enemies to dodge, it’s set out like a small maze. there are crystals to get for points and key cards to get for opening doors and completing the level, to complete the level you NEED the yellow key card. Simple as that. Now part one of gameplay is you setting out what path the robot should take, so you draw a line from the robot to the door while collecting everything and anticipating where enemies will be moving. Part two is you watching it play out and determining whether Bishop 7 goes fast, slow, forwards or backwards or just straight out stops. You must keep an eye on your energy bar though, it forces you to choose where you move wisely. The layout of the gameplay is great, it’s easy to grasp, it’s actually different from other puzzle games and it just feels nice, it seems to flow. I really have no complaints when it comes to gameplay, maybe apart form the fact that it’s a hard game, or maybe I’m just a crappy puzzle game player. There’s also a different way to control Bishop 7 which is with the movement of your head, leaning to the right will make him faster and leaning to the left will make him slower, I didn’t find this too fun or as even a good way to play so I kind of stood clear of it once I tried it. It was awkward to use and it kind of makes your neck hurt a bit. 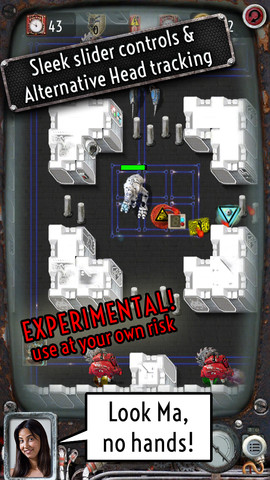 In end I like this game, I think it’s a cool little action-puzzler that you can play anywhere at anytime considering there’s really only two things for you to do in order to start a level, it looks good, it plays good, the only problem I have with it was the story, well, lack there of. It’s a big thing for me because I feel like it gives the play a purpose to actually play the game and, honestly, I just liked the idea of the story and want to snag more information about it. It’s still a great game at the end of the day and puzzle-lovers will go nuts over it.