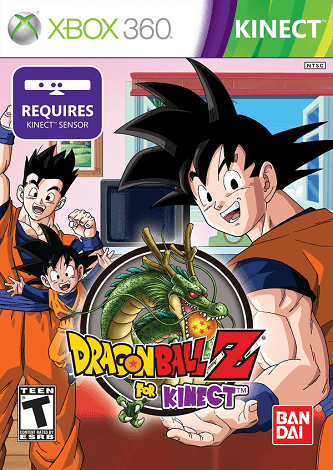 Overview:
Dragon Ball Z is probably one of the most famous anime series in the West and you would be hard pressed in finding a person who hasn’t seen at least a part of this legendary series. Over the years Namco Bandai has brought us a number of Dragon Ball Z fighting games and now the company has chosen to take advantage of the Kinect’s unique capabilities. I mean, who hasn’t pretend they could shoot a kamehameha? The question is, does the Kinect work well with this game or has it become something that should be erased with the Dragon Balls?

Story:
Now while fans of the Dragon Ball Z series probably could recite the entire story of the series by heart at this point, there are a number of disappointing issues with the way Dragon Ball Z for Kinect handles its story arcs. Now players will be happy to hear that the game does cover everything from when Raditz lands on planet Earth, to the Freiza saga, the Android and Cell battles and the finale with Majiin Buu. 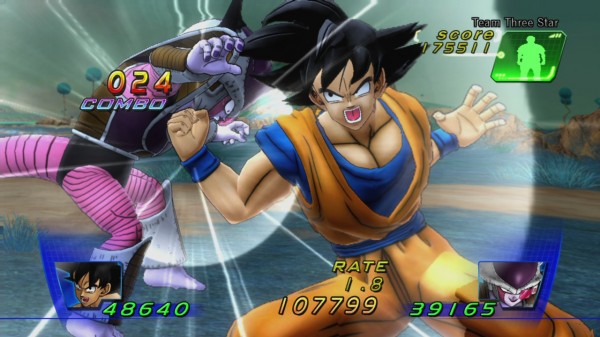 Unfortunately while the game does include all of these major story arcs, the term “arc” should be used very loosely with what is presented in the game. While players will be able to experience every key battle in the each story arc there is practically nothing done to flesh out these storylines and even with the focus solely on major battles, gamers are given only  a small glimpse of the each battle, with only one or two brief cut scenes displayed before a battle.

As such this game’s storyline is at its best only when those playing it simply want to fight the major battles in the series and simply want a no nonsense fight with almost no storytelling whatsoever or even a set up for some battles. The fact that the series’ memorable storyline has been reduced to such a simple stub of what it used to be will be a major disappointment to fans of the series and anyone who may be introduced to the series through this game.

Visuals:
It is interesting to note that Dragon Ball Z for Kinect is an absolutely gorgeous game as far as graphics are concerned.  The cel-shading in the game is absolutely great as the characters have never looked better. The same can be said for the environments you will be duking it out in. 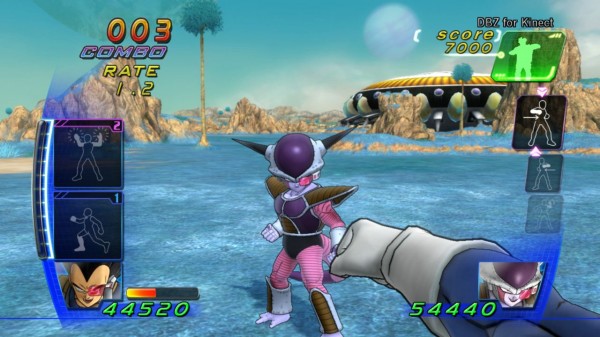 While players do miss out on how great their fighter looks during combat it is interesting to see how these fights occur from a first person angle. Various punches and kicks will be thrown from this view and impact your opponent, while you will have to defend standard attacks with block or swaying motions. This new perspective is certainly a nice take on the fighting found in DBZ, though players will often be thrown out of first person mode for any combo attacks or special moves which will then be relegated to simple quick time event motions, which is sad as the various attacks would look very interesting from this new perspective.

Audio:
Considering the wide reach that Dragon Ball Z has had and how the English dub for the anime series has become something that almost every anime fan in North America has seen at this point, many fans of the series will be disappointed to hear that a large number of the original voice actors do not return to reprise their roles in Dragon Ball Z for Kinect. 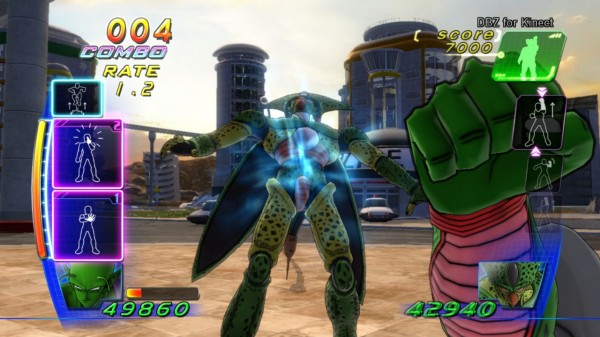 The various characters that have had their voice actors replaced are still voiced well and are mostly close to the originals, meaning newcomers may not notice anything different. That being said, the game does feature some decent sound effects to go along with all of the fighting and explosions that occur within each battle.

Gameplay:
Dragon Ball Z for Kinect allows the player to step into the shoes of some of their favorite fighters through only two gameplay modes; a story mode and a simple score attack mode where you try to top your score from the story mode in each fight. As such, anyone hoping to fight side-by-side with another member of the household will be disheartened to hear that there is no such option in the game. 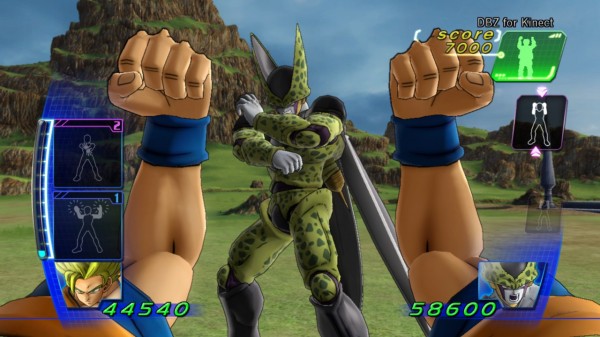 Now battles are fought in a first person perspective and the way to win is simply to drop your opponents health number down to zero. This can be done through a variety of different attacks that all must be performed using the Kinect. When the player is within strike range they can throw punches and uppercuts as well as kicks to the enemy and whenever they are out of your range you can perform ki blasts that fly towards the enemy simply by punching.

You won’t always be on the offensive however as you will also have to use your arms to block incoming attacks and sway forwards, backwards, left or right to dodge certain attacks as well. You can even jump in separate from an up-close battle and move into ki-blast range. It is worth noting that as you perform standard punches and kicks, you will raise a small combo meter that, when filled, will enter a quick time event sequence where the player must rapidly punch forwards to perform a string of combo hits. 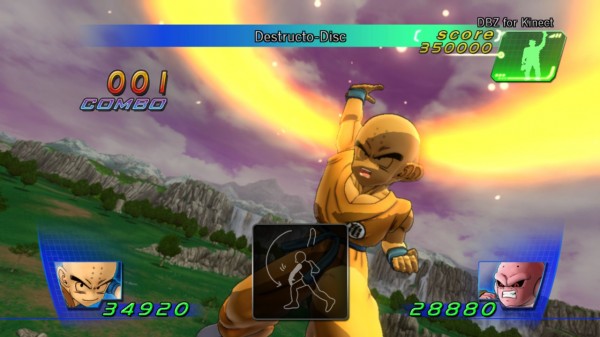 Now while basic attacks may work fine, there are some issues with your super attacks. Anything done with the Kinect boils down to how well it can read the player’s motions and while basic attacks and dodging work well enough, performing a super attack can be hit and miss with the way the Kinect tracks the player. Some super moves such as Goku’s signature kamehameha or Krillin’s Destructo Disc work well enough, while other special moves are nearly impossible to perform thanks to the fact that the Kinect has issues recognizing some of the poses. It is also worth noting that actions that require rapid punching, such as combo attacks or pulling away/defending from incoming opponents, often fail simply due to the Kinect not picking up the rapid motions.

Though you shouldn’t be too concerned about how the Kinect picks up your motions as simply performing the most basic of punches and kicks is pretty much what Dragon Ball Z for Kinect boils down to. The fights are very repetitive and often extremely easy to win as your opponents are not only hesitant to defend themselves but any of their attacks are easy to block or dodge. Meaning that for nearly all of the fights you will play will simply involve constant punching, a few kicks, a few blocks and maybe a special attack if you want to spice things up. This quickly becomes repetitive and bland with barely any challenge. 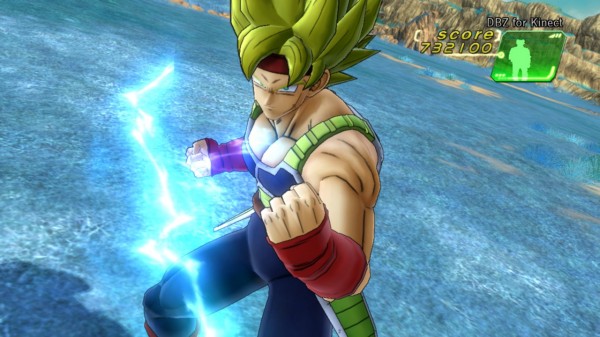 As mentioned earlier, the game’s story mode is very short thanks to the fact that it lacks substance; players will find themselves a rather short game here. While there is some replay value to be found in the Time Attack mode as you try to best your scores, these are rather anemic inclusions. It is worth noting that there is an anime OVA included on-disc with this release in the form of the never before released in America Episode of Bardock. The episode is twenty minutes long and deals with a what-if scenario involving Bardock. This is a nice inclusion but one that barely pads out the games limited play time.

Overall:
On paper Dragon Ball Z for Kinect sounds like it may be one of the best Kinect experiences you may find outside of a dance game. However it simply boils down to being a bare-bones offering that provides simplistic and repetitive fights against some of the biggest opponents in Dragon Ball Z with absolutely zero build-up. To top that off, anything that spices up the action usually is met with the Kinect failing to recognize your motions. Dragon Ball Z for Kinect could have been something great, but ultimately is something that should be passed up unless you are dying to see how Episode of Bardock turns out.