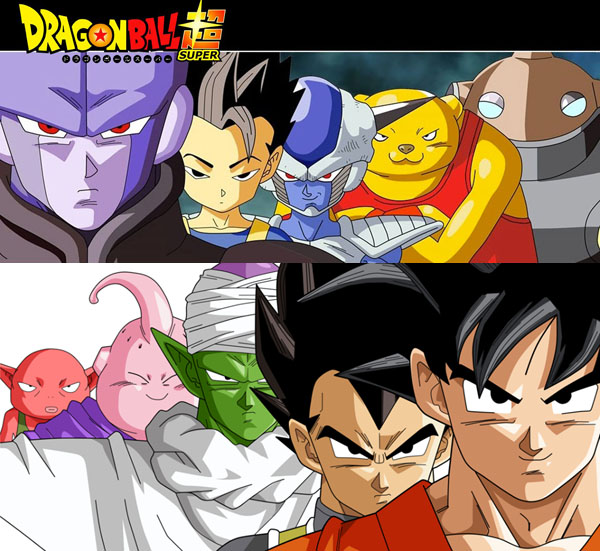 While there were a few moments of new material in between the retellings of the Battle of Gods and Resurrection ‘F’ movies, the Universe 6 arc of Dragon Ball Super is the first to contain entirely new material, with a plot outline provided by series original author Akira Toriyama. Running for 15 episodes, the ‘Universe 6’ arc pits five fighters from Universe 7 (the universe we all know and the home of the main protagonists) against its twin universe of Universe 6 in a tournament organized by both Universe’s God of Destruction. We get new characters, new transformations and if you can believe it, even more Dragon Ball World expansion.

I considered making this review spoiler free but as this is all new content and basically everything new is a spoiler this will be a pretty spoiler heavy review. If you want to come in fresh when you watch the first new Dragon Ball serialized material in about 20 years then please stop reading now, or quickly jump to the end, see the score I give and then leave. 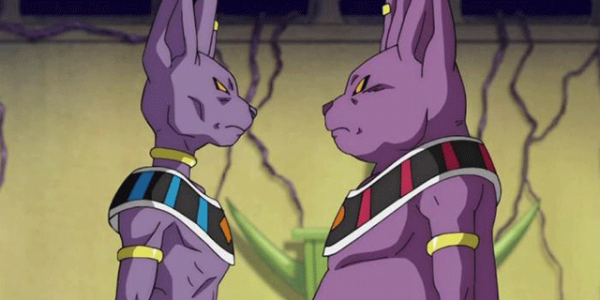 The plot of this arc revolves around a trivial feud between Beerus and his larger twin brother Champa who like Beerus, is another great addition to the Dragon Ball world along with his female assistant Vados. Both new characters have terrific traits, with Vados witty and uncaring nature often clashing with that of the boisterous Champa who is more often than not selfish in his motivations. Champa has collected 6 of the Super Dragon Balls and is willing to wage them against Beerus in exchange for him swapping the Earth from Universe 6 for the Earth in Universe 7, which in a sneaky self-referential history fact has been destroyed by internal war. Thus, the Universe 6 vs Universe 7 tournament is created.

The great thing about having all new material is all the speculation that comes with that. Dragon Ball has been around so long that most fans have memorised the events of the series, so it is incredibly refreshing to have a plot where you don’t know what is coming next (outside of horribly spoiler filled titles). While the fights themselves range from average to spectacular, not knowing the result of each fight allows for some great tension and twists. From Goku’s surprise loss to Frost to Vegeta’s ring out being voided because he stood on some rubble that still counts as the ring made for some fun what the f**k moments. 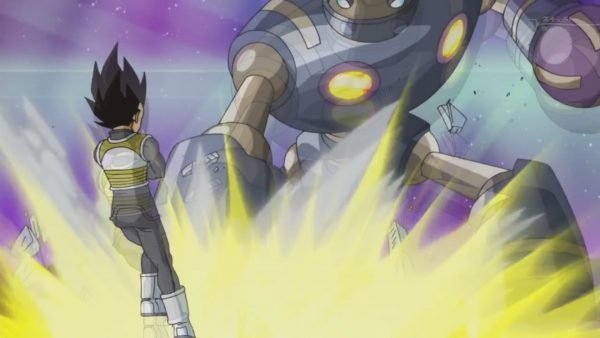 The community discussion around Frost’s win on Goku was great, with people analyzing the scene frame by frame and coming up with all sorts of interesting theories. It may not be a comment on the show’s quality, but I think it’s a testament of any medium to get so many people discussing certain plot points.

One could easily argue that the tournament centered way too much on Goku and Vegeta, but Piccolo was really the only other fighter on that team thanks to Buu’s rather hilarious disqualification and Monaka’s complete lack of fighting experience or any hidden strength. It would have been nice to see Piccolo get at least one win for the team,  but seeing him in action with some new techniques and his trademark strategy was reward enough. The mystery surrounding Monaka was great addition to have lingering in the background, even though there wasn’t much to his reveal. 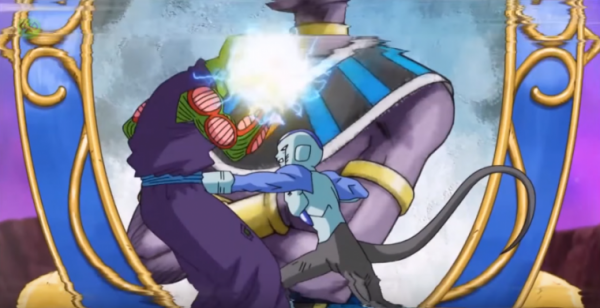 Each unique character from Universe 6 and their abilities added something more to each fight as opposed to each bout going to whoever was superior in battle strength. Botamo, Frost, Magetta, Cabba and Hit all had something unique up their sleeve and while not all their personalities or techniques were equally developed or interesting, what we did see was great and bought more depth to each fight as well as forced the Z-Warriors to find new strategies instead of relying on brute force. As expected, there were also a fair few nostalgia call backs such as Goku referencing how he had never seen Frieza’s third form or all the dialogue between Saiyan’s Cabba and Vegeta.

That being said, the new arc did a good job of paving out new plot and history details without relying too much on the past. Sure Frost and Cabba were from races we had seen before but their stories were very different. The Saiyan race in Universe 6 is one that is hired to fight for good as opposed to the planet conquering Saiyans we know of Universe 7. Frost turns out to be just as conniving as Frieza but in a different way. We even get to see what the Kais from Universe 6 look like. I really enjoyed seeing both familiar themes with a new twist alongside entirely new races such as Magetta of the Metal Men (I really loved their weakness to insults as well). 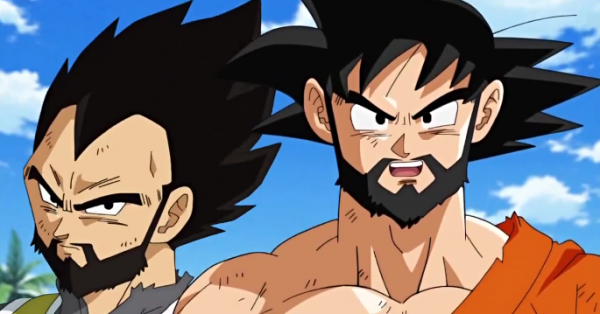 The Arc also contained some great humour, mostly in the way of visual gags and one liners. From Goku and Vegeta emerging from the time chamber with beards, to Buu failing the written exam to Goku grabbing the Galactic King’s private parts by mistake, light hearted and fun moments were scattered throughout the arc and always kept it from getting to serious except for when the plot really called for it. 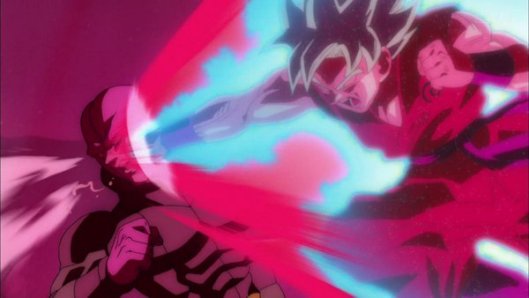 And when things did get serious the epicness was certainly turned up. Strong examples include Goku and Hit glaring down Champa and Champa threatening to destroy his entire team. The Goku vs Hit match is another example and probably one of the defining moments of Super so far. Goku bringing back the Kaioken was amazing as was Goku’s reason for using it. We even got an explanation as to why Goku had not used the technique in such a long time which I certainly didn’t expect after the complete lack of further explanation on similar items such as how Vegeta attained the Super Saiyan Blue transformation. The artwork, animation and choreography were at their best in this pivotal match as two of the strongest fighters portrayed in the show came to blows with one another. 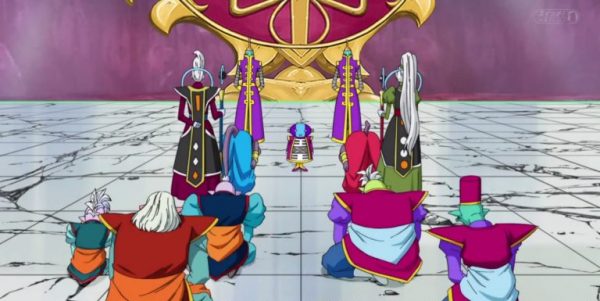 At the very end of the tournament we get yet another tier of gods with the King of All, who can seemingly wipe out all 12 universes in the blink of an eye. I’m always up for expanding the mythos of a series so it will be interesting to see what relevance the King of All plays in the story. He has already proposed yet another tournament which I was a bit apprehensive about as I feel Dragon Ball relies on tournaments too much (Cell Games, Buu Saga Tournament and now these two tournaments in Super), but hopefully as the participants will be from all 12 universes there will be some unexpected twists. 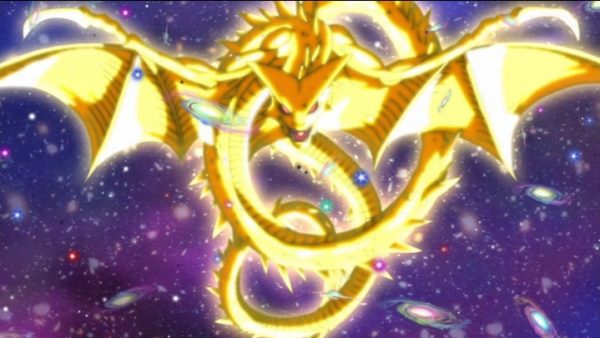 We also got to see the king of all Shenrons, a giant yellow Dragon who I can’t deny reminded me of a yellow Blue Eyes White Dragon from Yu-Gi-Oh!. Seeing Super Shenron in all his gigantic scale was a site to behold and again another level to the legend of the Dragon Balls which have remained such a pivotal detail throughout the entire series run. Beerus’ wish was a nice surprise look at his softer side which expanded his character nicely and may even have some interesting ramifications down the line if Toriyama revisits that concept.

The artwork and animation varied wildly throughout the arc. We got some times where it was a shining example of what Toei can do do and then other times that were just incredibly average with lack of detail, lack of animation and just off model characters all over the place. It’s hard to give the visuals a solid rating with the wild fluctuations in quality, but I feel it was a small improvement on average over Resurrection F arc, with emphasis on the small. I did feel both the soundtrack and sound in general were used better here, except for the instance of the theme song playing over the Hit vs Goku fight which didn’t feel right to me at all. 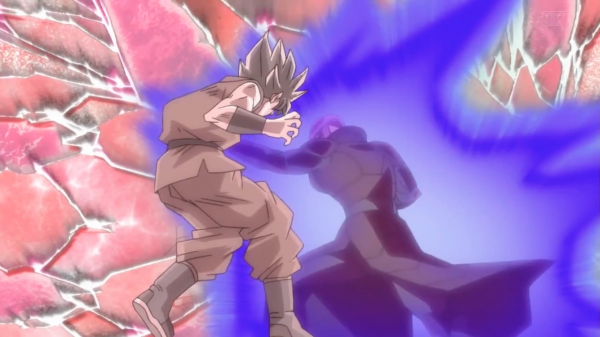 Overall the Universe 6 vs Universe 7 arc was a roller coaster ride of fun, tension, mystery and lore expansion. While the arc was perhaps stifled slightly by the tournament format and repetitive scenery, the new characters introduced with their unique abilities and personalities kept the arc moving at a good pace. While there is definitely room for improvement in terms of visuals, audio and fight choreography, the decent plot, crazy events and strong character interaction continue to save the series from being mediocre.

I definitely had a fun time with the tournament arc but am eagerly anticipating the upcoming Future Trunks arc, which is promising to bring back a much loved character rarely used outside of video games in the last 20 years. Be sure to check back here when that arc is completed for our full review on the arc and of course keep looking with us for all your timely Dragon Ball news.