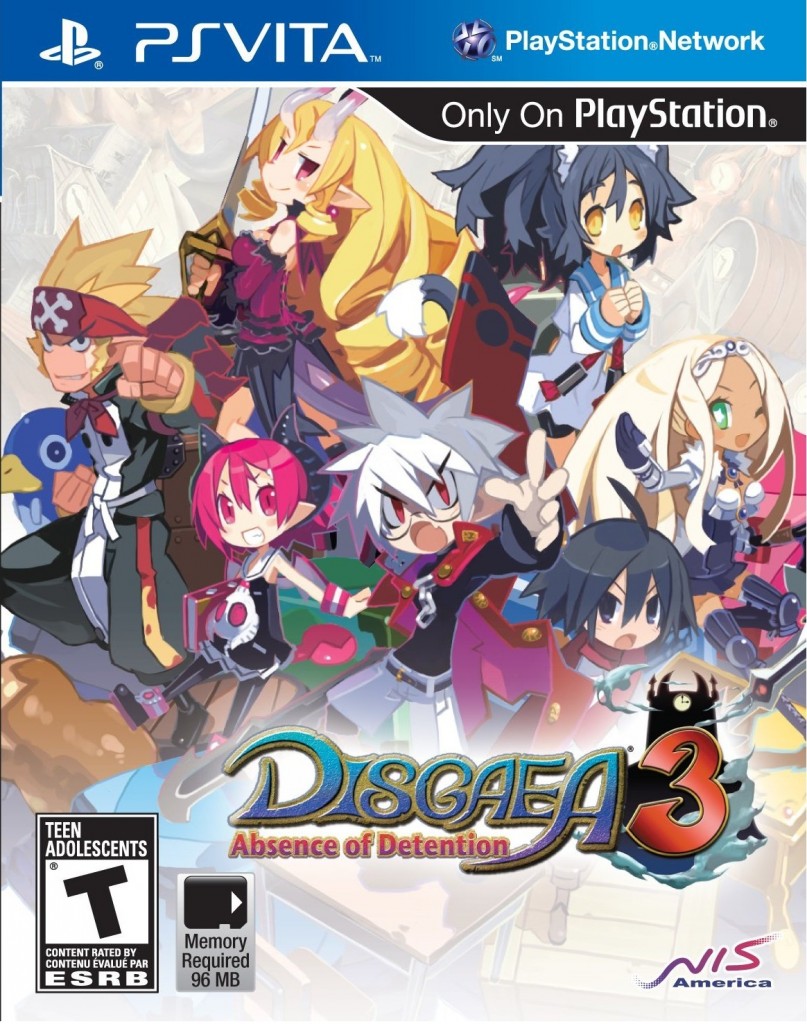 Overview:
While the RPG genre is flourishing in the video game world, there is a certain branch of said genre which has seen nearly zero games over the past few years. In fact, despite there now being two brand new portable gaming platforms available, there are no Strategy RPGs on either system. In fact, there are barely any RPGs for either system but that is another story entirely. With the PlayStation Vita’s release a few months ago, a slew of new possibilities opened up for developers and NIS America has stepped up to the plate with an RPG for a new generation of portable gaming.

Originally released on the PlayStation 3 back in 2008 as Disgaea 3: Absence of Justice, NIS America has ported the title over to the PlayStation Vita as Disgaea 3: Absence of Detention. With brand new content exclusive to the Vita version of the game, all previously released DLC included at no cost added onto what was originally a massive experience, how does this return to the Netherworld Evil Academy turn out?

Story:
In the Netherworld Evil Academy there is only one student who can be called the #1 honor student and that is a boy named Mao. However an honor student in the Netherworld is the polar opposite of an honor student on Earth. In fact, those who actually attend class like normal students are considered delinquents! The reason Mao is such a great honor student is because he never goes to class, never does his homework and spends all his time cooped up in his room playing games and doing research of his own. 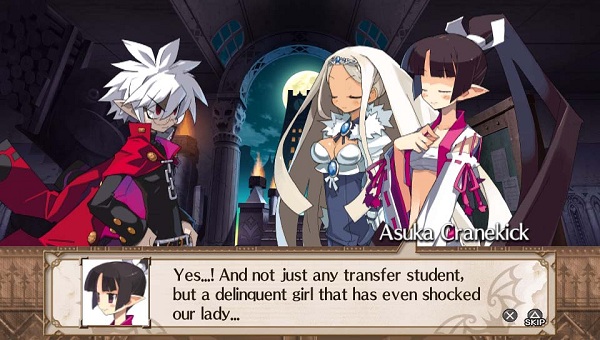 That all changes when Mao chooses that he must overthrow his father, the evil overlord and Dean of Evil Academy after his father deleted his video game save containing over a four million hours of gameplay.  To do this not only must he seek out a hero (to steal the hero’s title from), he must fight against countless opponents while trying to overthrow his father in what begins as a selfish kids rebellious act and evolves into a journey for the ages.

Now while Disgaea 3: Absence of Justice’s plot may sound like it is full of clichés, it sort of is. What truly sells the game’s storyline is the personalities of practically every single character in the game itself. Each character has a peculiar and enjoyable personality, and this doesn’t just include the main characters either. Small conversations can still be held with your random team-mates who all have a different personality depending on what character class they are, making for a story that will leave you laughing often with its off the wall and light-hearted humor.

Now it is worth noting that nearly all of the additional content that has been packed into Disgaea 3: Absence of Detention is end game content which means that you will need to be spending a lot of time playing through the main story mode just to access the brand new chapters included in the Vita version of the title as well as the extra content which was previously DLC. 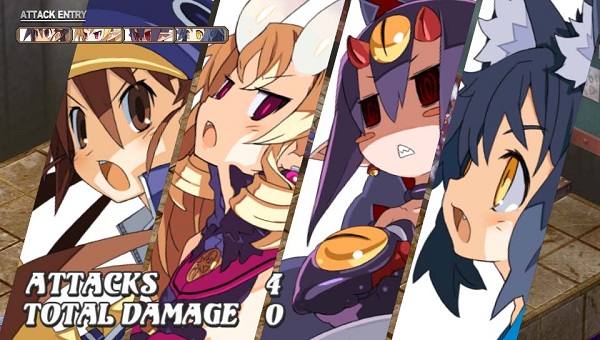 Obviously this is detrimental to those who have already played the original Disgaea 3 release as they will need to spend hours replaying story battles just to access this content. Then again, with a story mode as interesting as the one found in Disgaea 3 and gameplay to back it up, a few extra playthroughs can’t hurt.

Visuals:
Considering Disgaea 3 has already been released once on a home console, it is pleasantly surprising to see that Disgaea 3 on the PlayStation Vita is presented with the same quality found in previous releases, it actually seems to surpass it. Nearly every element of this game is presented in sharp quality, and that isn’t just when players choose to use crisp or smooth sprites.

The game itself still uses the same styled sprites as seen in past Disgaea games, though they appear to be slightly touched up for this version of the title. This is especially true whenever players enter battle and begin to use special skills, outlandish as they usually are. Another highlight of the title’s visuals are any segments where the characters are speaking to one another in visual novel styled format. Every main character is given a waist-high portrait of themselves which is animated to represent the character’s emotions in each conversation. These character portraits rival what would be seen in most anime series today, which is impressive to say the least. 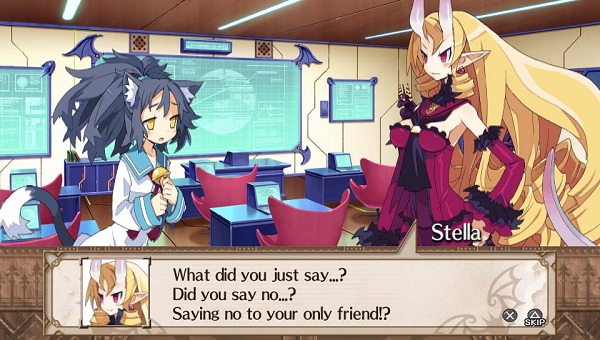 Audio:
One of the biggest concern a gamer can have when they see a portable version of a game they love being developed is that the game’s voice acting will either be removed or chopped up  to fit on the new platform. Thankfully that is not the case as every single cut-scene, previously voiced in-game dialogue and music is intact with this release.

This includes a Japanese voice track for the purists out there, but those who choose this option will miss out on the enjoyable English voice track. The rest of the game has adequate background music, though the main piece of music gamers will listen to in the main hub can grow to be annoying after a short while.

Gameplay:
For anyone who is familiar with the Disgaea franchise, you already know what you are in for. For everyone else, Disgaea 3: Absence of Detention is an SRPG down to the core. Players will fight battles via a turn based system on a battleground with a movement grid. In battle players must command each unit separately and tell them where to move, what attacks or abilities to move and more. In fact, the battle system itself is rather simplistic at first glance; however it is much deeper than it seems. 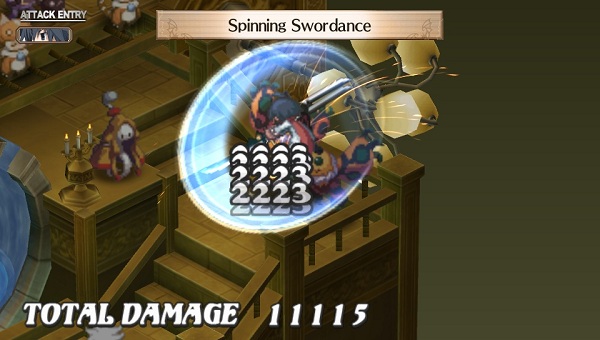 While not an overly difficult game, Disgaea 3 will punish players for idiocy and basic battle strategies. As such, players will quickly need to learn the use of geo-block to swing the battles in their favor by boosting or lowering ally/enemy abilities, aligning their characters properly to unleash powerful combo attacks, throwing your enemies and even your allies and more.

Before you become too worried however, there are handy tutorials scattered throughout the beginning of the title which explain most of the ins and outs of combat, making Disgaea 3 accessible to those who want to simply enjoy themselves. Though gamer’s shouldn’t take ease of access as a sign of simplicity, as it can take many hours of constant fighting to truly master the combat system found in Disgaea 3: Absence of Detention.

It is worth noting that the transfer to the portable PlayStation Vita actually seems to benefit Disgaea 3’s gameplay style. Although some battles can reach upwards of a half hour in length if you struggle to defeat your opponents, most battles will last under ten minutes. While this isn’t anything special for a standard RPG, Disgaea 3 always places players back in a central hub which serves as a main town. 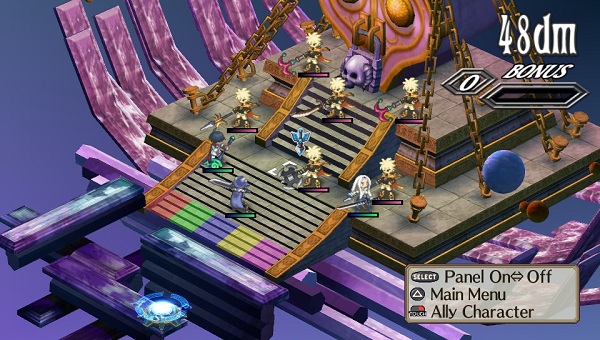 This main town offers all of the different item shops you will need, as well as a place to heal/revive your characters but also an easy to access save option that allows you to save the game whenever you are in the main town. This makes Disgaea 3 a perfect game to pull out of your pocket, fight one or two battles, save and put away for later with no harm or foul.

It is great that the title has made a flawless portable transition to the Vita as it still offers an absolutely massive amount of content. Disgaea 3: Absence of Detention’s main story is lengthy to say the least, but the amount of end-game content is absolutely immense. Players can take on random dungeons, try out brand new content exclusive to the PlayStation Vita and indulge in all of the DLC that was originally released for the PS3 version of the game. The sheer amount of content found in Disgaea 3: Absence of Detention is unlike anything else you will probably ever see on the Vita… unless of course another Disgaea title graces the system.

Now given the fact that the game is now on the Vita, there are various uses for the front touchscreen, the rear touchpad and the GPS feature as well. Unfortunately all of these mechanics are poorly handled and feel unnecessary. The GPS feature is used to raise the player’s “Honor Quotient” faster than normal. The Honor Quotient can be raised in-game through standard means, but considering it offers various in-game bonuses and other things, those who only possess a Wi-Fi version of the game will find this feature lackluster. 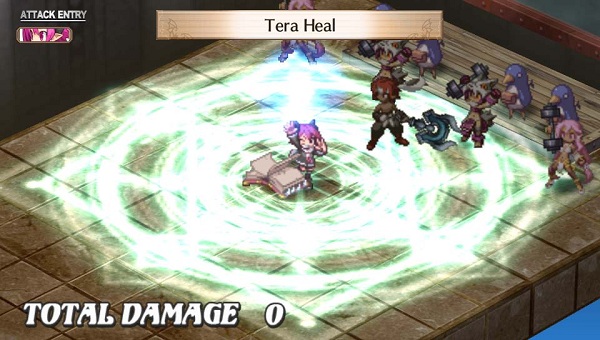 The touch screens themselves can be problematic at the best of times as a few errant presses of the back touchpad can cause the camera to go out of control (which is an issue considering the camera itself can be problematic on populated battlefields). In fact, it is easier to simply ignore the fact that there are touch controls altogether as everything can still be controlled via the face buttons on the Vita. Long time Disgaea fans and newcomers will likely be choosing to use this classic control scheme thanks to its ease of use and friendly design compared to what the touchscreen controls of the Vita offer.

Overall:
There is one thing that the Vita was missing before Disgaea 3: Absence of Detention was released, and that was a true lengthy title that offered boundless amounts of content that can be returned to again and again. The title may have a few small issues with the camera and poorly integrated touch controls and those who have already played the original release will be replaying most of the title over again. Despite this however, Absence of Detention is a must have title for any Vita owner with its flawless transition into the portable gaming world.