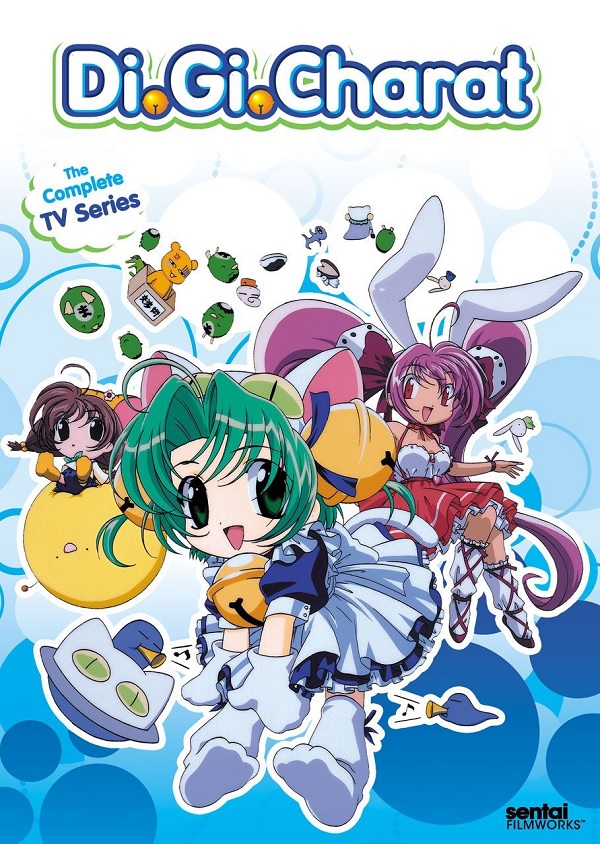 Overview
While it seems like everything has a mascot nowadays, especially in Japan where even Microsoft has employed the use of anime mascots to sell operating systems, back in 1999 this was still a fresh idea. As such, when Di Gi Charat was produced to advertise a store in Akihabara, it might have seemed like a silly idea but it turned out to be popular enough to be given a number of spin-offs and adaptations. After the license vanished for a few years in North America, Sentai Filmworks has returned with the original sixteen episodes of Di Gi Charat in one package. Question is, was this license one that needed to be rescued or should it have been left in the past?

Story
In Di Gi Charat an alien catgirl named Dejiko, her sidekick/friend Puchiko and a strange floating orb named Gema have landed in the Akihabara area of Japan. Dejiko has a simple goal for an alien, to become the best idol the nation has ever seen. However the road to becoming an idol is one that is paved with hardships, especially since the three of them have no money and nowhere to stay. 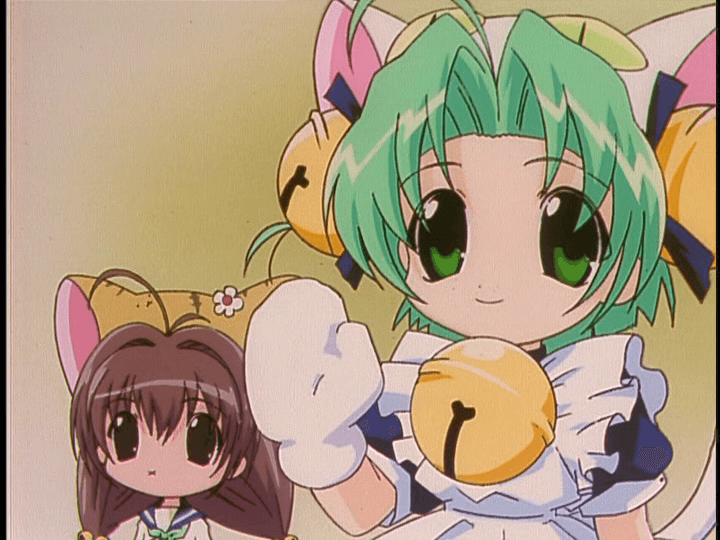 After accepting a job and a place to stay working at a game store in Akihabara, Dejiko encounters a rival named Rabi-en-Rose, whose real name happens to be Usada, that also wants to become the best idol in the nation. Despite their rivalry, the Rabi-en-Rose also starts to work at the game store as the group goes through their odd little lives.

Now it is interesting to note that Di Gi Charat is simply a series of shorts which means that there really isn’t any story to speak of and the aforementioned plot is simply a set-up to place the characters in their current positions with no development on any front. What it lacks in story and well, coherence, it makes up for with charm and plenty of humor that runs the gambit from simple gags to watching Dejiko abuse characters with her mean nature. 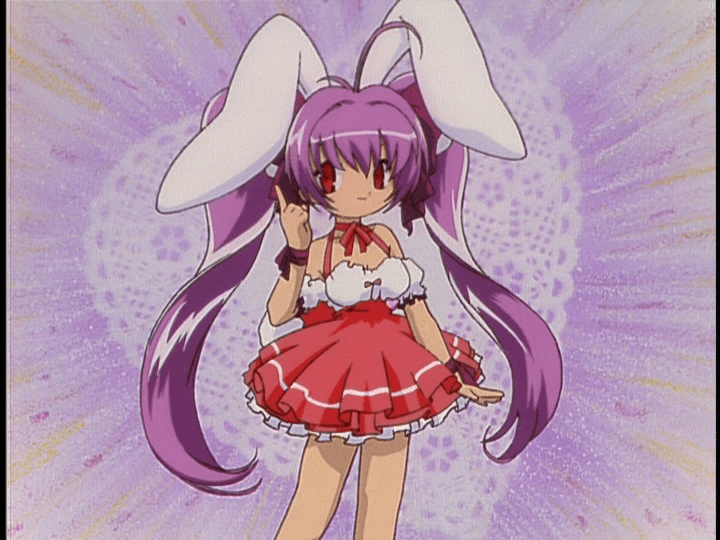 Since every episode is less than five minutes in length when you factor in the opening sequence, each episode works as a standalone gag that sees Dejiko and the rest go through a situation which can be anything from trying to sleep through a noisy night, deal with a guy who has issues about how they talk, singing a song, to fighting off a monster using garbage and a creepy looking bear.

Oddly enough, with Sentai Filmworks’ release of the series states on the back of the case that it includes the appearance of Piyoko and her plan to oppose Dejiko. However this does not occur during the original TV series and is part of a four episode OVA special that is not included in this release which only contains the original sixteen shorts. 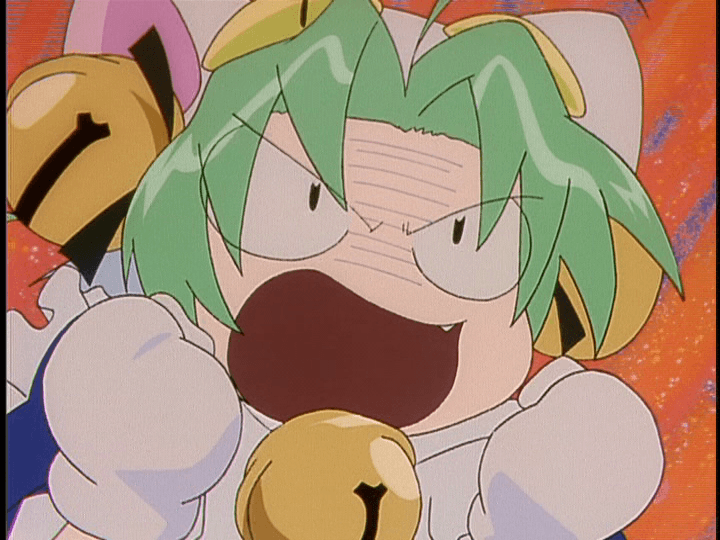 All in all Di Gi Charat makes for a rather humorous series that lacks any real depth outside of a couple of very minor developments that show that Dejiko might not be such a terrible person and some minor backstory for Rabi-en-Rose, both of which are still used for the sake of humor. As such, Di Gi Charat is a simple turn off your brain and laugh series with little else to it.

Visuals
Even for a series from 1999 Di Gi Charat was clearly produced with some very low budget animation techniques, with background characters literally looking like outlined fingers. That being said, the chibi deformed look that most of the series sports has its own certain charm and the expressions that a lot of the characters make at times helps make a lot of the humor work.

Audio
Now while English dubs usually are an alright way to watch a series, the dub for Di Gi Charat was produced by Synch Point many years ago and to put it simply the dub is really bad. While a few of the side characters have some decent voice work, Dejiko speaks in a monotone voice with barely any of the charm that the Japanese voice actress for the character exudes. 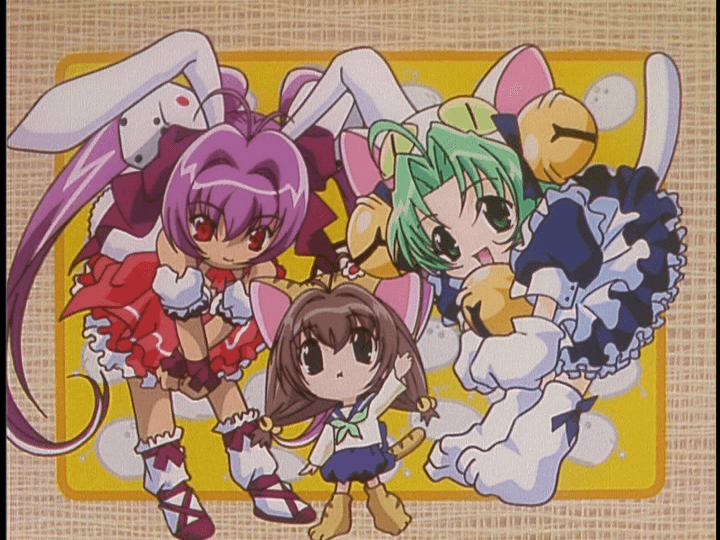 In almost every regard the Japanese cast is superior to the English cast, so although viewers may need to read the subtitles to understand what is going on, they will be able to enjoy the series a lot more. There is an entire episode devoted to a song “Party Night” that is highly enjoyable and as for the opening and ending theme, the opening theme “Only One No. 1” by Masami Okui is short but catchy while the ending theme “Happy Day” by the Japanese voice actresses appears only twice but is still mildly enjoyable.

Extras
This release of Di Gi Charat comes with no real special features as the only extra on-disc content are some trailers for other Sentai Filmworks anime and the disc credits.

Overall
Di Gi Charat: TV Series offers the original sixteen episodes and although the packaging does say that it includes the Piyoko arc, it does not. Outside of that strange advertising for something that doesn’t come with the release, Di Gi Charat offers a nice dose of humor in an hour long package. Even with extremely dated visuals and a bad English dub, the series still has a lot of charm fourteen years later and for the current asking price it helps make up for a few of Di Gi Charat’s issues.