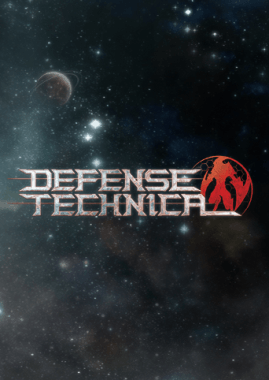 Overview
Originally launched on iOS devices, Defense Technica gained attention for being similar to another RTS title called Defense Grid. The main draws to Defense Technica were that it had sleek 3D environments as well as mobile availability. Now indie developer Kuno Interactive has created a PC/Mac edition on Steam to unleash their child. Since the mobile draw has been removed, will Defense Technica stand a fair fight against other tower defense titles? Let’s take a look…

Story
Perhaps one of the lagging characteristics of this tower defense title is an uninvolved storyline. The developers tried to incorporate meaning into the storyline by instilling mission briefings prior to entering a level and by forcing the backstory down our throats at the start-up menu. However, the backstory can be easily skipped by pressing (ESC), and mission briefings are unsubstantial text. If you are one to enjoy a good story, Defense Technica forgot to charge up their power cores. 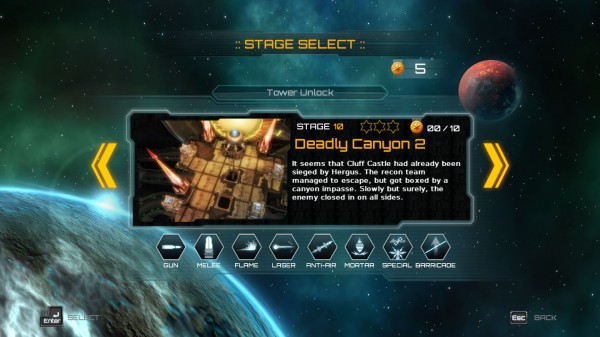 What could have made the game even better would be an interactive storyline that instilled the mixed emotions of this rag tag group of survivors facing extinction. Cinematic videos are also a great way to garner attention, but low budget indie projects do not necessarily get that luxury. Involving a mission debriefing for the first time run through – like StarCraft – would make the story more visible and appealing.

Gameplay
Defense Technica’s strongest value lies in a solid foundation that has complimentary supporting assets. The foundation stands firm because the focus remains that the player must defend the base core at all costs. Mechanisms like enemy spawn rate, gameplay speed, difficulty, and tower cost all assist in capturing the fun aspects that make tower defense titles addictive.

Dynamically changing environments takes the title’s difficulty to another level. Placing a towers along a path can easily deter enemies from the ‘closer’ route, but what happens when the scene physically shifts? Such environments incorporate pulley systems to unlock new pathways as more enemies spawn. In these occasions you may have to build some blockades to create longer routes, but some instances you just have to deal a ton of damage to get by. 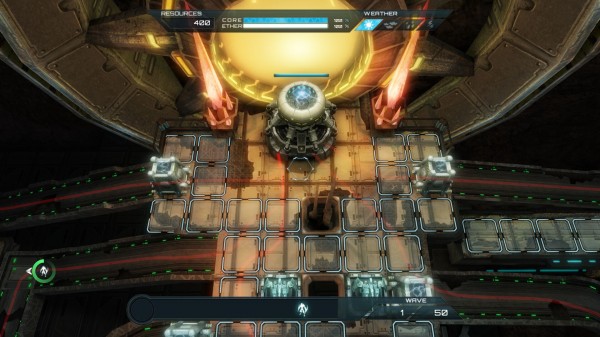 In order to explain tower customization, the acquisition of medals must be explained. For the first couple stages you may become skilled enough to take 0% damage to your power core. In these instances you would gain the full amount of medals available for that stage (i.e. 3 medals for the lesser stages). Upon reaching latter stages, you have the ability to level up individual towers. However, you must have earned enough medals from your previous winnings to allocate points into upgraded/new towers. Once negative attribute about switching between normal and hardcore difficulty is that you do not gain more medals by completing hardcore modes. If the developers balanced out medals according to completion/difficulty, it would be more engaging to earn the medals from a hardcore stage. Perhaps if you decided to play hardcore only, you would gain the hardcore and normal amount of medals to be used in customizing towers.

Choosing your tower customization guarantees a whole new ball game, but the right upgrade might be crucial for your next stage. One such tower customization can be noticed with upgrading the ‘Stabber’ tower. This little guy stabs melee units and can be more useful against heavy armored foes. Once upgraded, this tower packs a punch as the damage output is significantly increased by electric swords attached to the Stabber’s arms. Further down the road you can attach a hammer to really dish out some heavy hits. 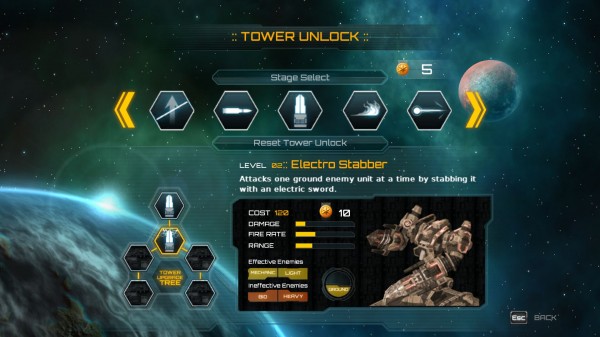 Audio/Visual
Audio has the potential to greatly affect the game environment whether its by sounding off an alarm or having a computer system detect abnormal readings. This tower defense title can easily be played on mute because the player can base tower placement and bombs purely by visuals. If the story was incorporated more into the mix, I could see more necessary involvement with dialogue and perhaps mission briefs.

Some titles are purely crafted to for the look and feel for iOS devices, but Defense Technica holds to its beautiful 3D quality on PC. While I do not encourage new players to play with the camera zoomed in, you will get to take a closer glimpse at your enemies ugly faces. Not only that but the environments are classy as well providing dynamic shifting battlefields and weather systems. Homing rocket launchers receive less visibility on a cloudy day, and fire turrets have a damage reduction during the rain. With visuals like weather factoring into gameplay, you cannot deny depth in game mechanics. 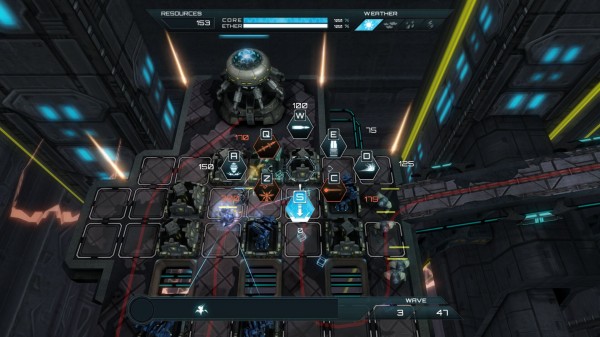 User interface is huge when dealing with events in real time. For the most part I think Defense Technica provides a sleek interface ready to take on the challenge of another wave of enemies. A combination of mouse and keyboard shortcuts should make upgrading and adding towers less challenging – unless you prefer keyboard only like myself. For a real challenge select hardcore and jack up the game speed. Let’s see how fast those fingers move!

Overall
Spawning from an iOS title, the PC version performs as instructed and does so without requiring you to purchase upgrades. What lacks in the storyline is made up in the functionally sound gameplay that proves to be addictive at each passing victory or abysmal defeat.

However, this title would be more attractive at a lower price. The iOS version sold for a margin of the cost yet required in game purchases for additional content. I would keep a close eye on the indie radar for any price reduction on Defense Technica.