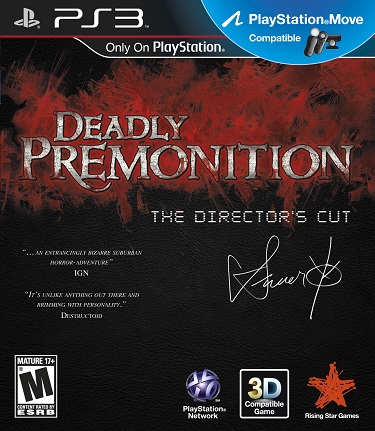 Overview:
There are many great games in the industry but simply creating a great video game doesn’t automatically make the title memorable. In fact many stellar games are so run of the mill that they are quickly buried under other titles despite being remarkable in many regards. Only a few games can stick with players in such a way that they remember them in years to come and one of these happened to be Deadly Premonition.

When it was first released on the Xbox 360 for only $20 in 2010, many people experienced a game unlike anything they had ever played before and while it had a handful of issues, many of them were overlooked in favor of everything else the game had going for it. With a price tag double of the original but a number of enhancements made to the game, Deadly Premonition: The Director’s Cut has hit store shelves, but is it worth picking up?

Story:
Players step into the shoes of FBI agent Francis York Morgan, or as he prefers to be called, York. They are tasked with investigating a strange murder mystery where a young woman has been killed and her body left attached to a tree in the middle of the woods. Upon entering the town of Greenvale, York quickly finds that not everything is as it seems at and with supernatural events occurring left and right and mysterious red seeds appearing at each crime scene, something is very strange in the country town of Greenvale. 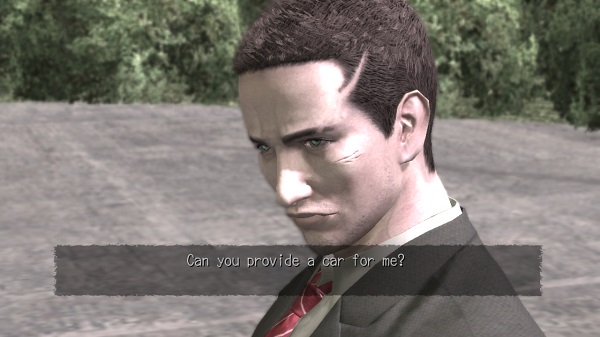 It is worth noting right off the bat here that anyone who plays Deadly Premonition: The Director’s Cut or even the original Deadly Premonition should enter the game with an open mind because at its very basic, the game’s storyline can be a bit convoluted and some of the strange twists that occur throughout the storyline’s progression come straight out of left field. You see, it is the world itself and the characters that occupy it that make Deadly Premonition the memorable game that it is.

Everyone in the town of Greenvale has a personality of their own and while some of them are obvious eccentrics designed for comedic purposes, they each are given some form of development and a number of side-missions can be done for each of these characters if the player chooses to pursue them. It also helps that, thanks to the game’s adherence to a real world schedule, each of the characters follows a daily routine as if they were living out their lives.

Tracking down an NPC may mean keeping an eye out for them at work, waiting for them to come home or seeing where they like to hang out in their down time. Each of these characters has a life of their own and one that they have lived for many years before York appeared and because of this we have an endearing set of characters that make even the most obscure NPCs worth remembering. 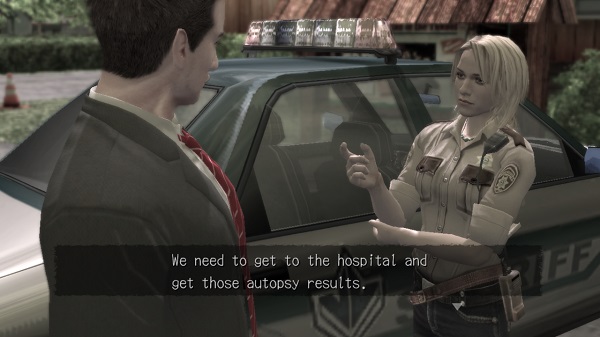 On the other hand, the eccentric Francis York Morgan is the true gem of this game. Practically everything about York makes the character impossible to forget. He is eccentric at times, makes multiple references to pop culture and even speaks to a mysterious Zach that no one can see. In a town full of strange occurrences, York may be the strangest of them all but in the end he also makes Deadly Premonition the memorable game that it is.

Visuals:
One of the bigger selling points in Deadly Premonition: The Director’s Cut is the fact that the game’s graphics have been given an overhaul and anyone familiar with the original will know that it certainly could have used a new coat of paint. However this coat of paint might have had a bit too much lead in it because while the world of Deadly Premonition does look a bit better than before, with better coloration and smoother textures, the game suffers from terrible frame rate issues. 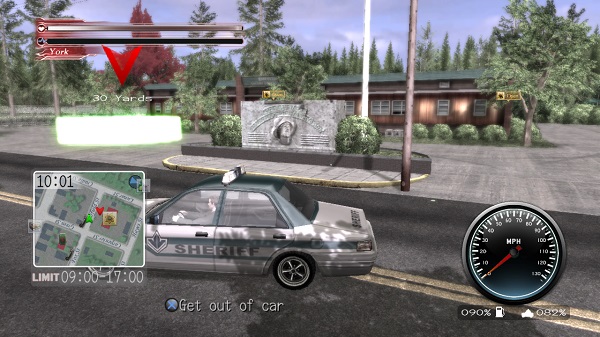 While the original 360 version of the game had a few problems with frame rate dips, The Director’s Cut becomes practically unplayable at times thanks to the fact that the game will slow down to a crawl in areas with a lot of characters or anytime rain begins to fall. There are times when the game does run at a normal pace but unfortunately these frame rate issues persist throughout the game to such a degree they become impossible to overlook.

Audio:
Outside of the quirky cast of characters, one of the most memorable things that Deadly Premonition had going for it was it’s amazing soundtrack and thankfully, that soundtrack remains as amazing as ever in The Director’s Cut. There are numerous background tracks which are just wonderful to listen to and even if they are played non-stop they never become annoying. These aren’t even your standard background tracks either, since many of them sound a bit strange at first but one can’t help but fall in love with them. 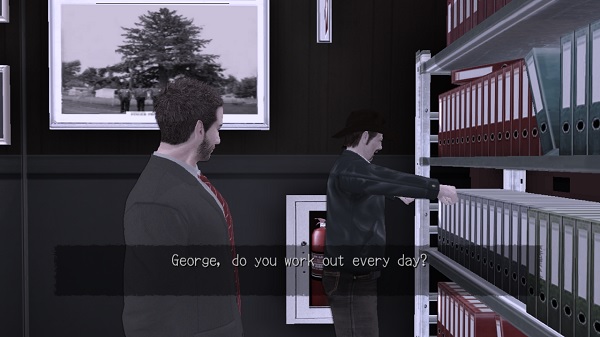 As for the voice acting in the game, the characters voice work ranges from great to terrible depending on the speaking character. Monster dialogue is still rather terrible with moans of “I don’t want to die” being very repetitive.

Gameplay:
Deadly Premonition: The Director’s Cut promised more than just a new coat of paint on the game’s dated graphics, it also promised a few gameplay adjustments and while a few of these may be a bit annoying to some, they ultimately create a better experience overall. This is thanks to the fact that the biggest change made to the game is how the game handles combat. 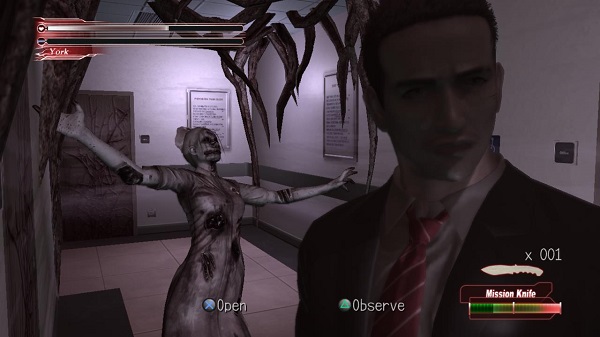 Taking down enemies in the original Deadly Premonition was a chore and a half thanks to poor controls and bullet sponge enemies which created parts of the game that dragged on and kept the player from some of the more enjoyable aspects of the game. Thankfully both of these issues have been addressed this time around thanks to the fact that enemies not only die easier, York handles better when shooting or swinging weapons around.

It is also worth noting that while a few additions to the game have been made, these additions are only extra cutscenes here and there. Nothing new gameplay wise has been added to the experience outside of PlayStation Move support, which many will just want to avoid, and 3D support which, if you have a television that supports it, should also be avoided thanks to the game’s framerate issues. 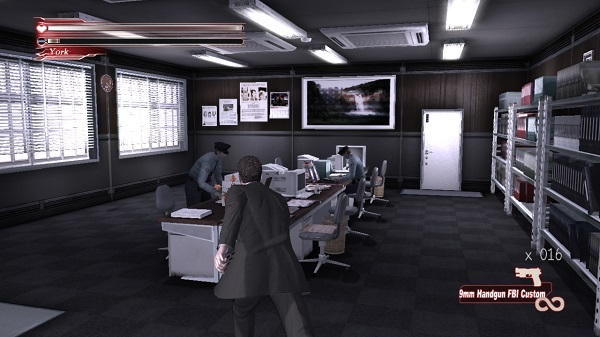 That being said, there isn’t much that really had to be added in to Deadly Premonition because really, what more could there be to add? The game takes place in what feels like a living and breathing open world. As mentioned before, every NPC has a routine of their own and players are free to explore the town however they wish. Don’t feel like tracking down the next clue in the case? Then you can do a few side-quests for the eccentric population for some great rewards, go fishing, and more. There are even elements that allow York to grow a beard if he doesn’t shave often enough or wash his clothes so he doesn’t become a “stinky agent” with flies buzzing around him.

Overall:
Deadly Premonition: The Director’s Cut remains quite a unique and memorable experience that offers a storyline unlike anything a gamer has experienced before and thankfully none of the core gameplay features have been touched and the game’s combat system has seen a nice improvement. Unfortunately frame rate issues plague this slightly better looking version of the game and none of the new additions really add much to the experience. However while those who have already entered the town of Greenvale may not find much new to see here, Deadly Premonition: The Director’s Cut is without a doubt worth picking up for the uninitiated and open minded.