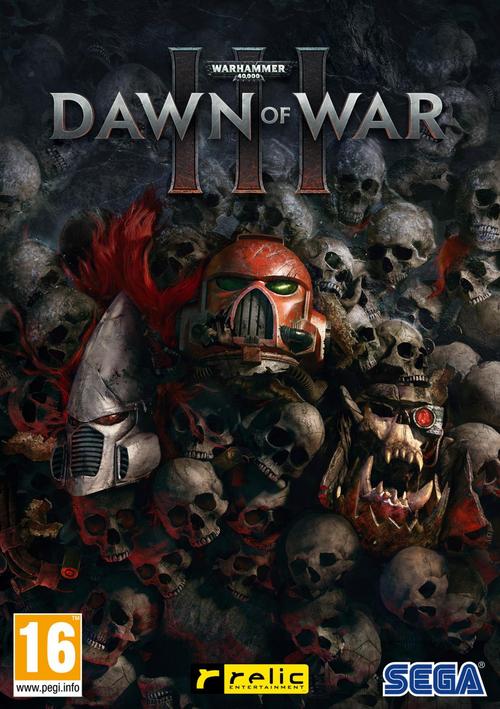 If you have been a regular reader here at Capsule Computers, you may have noticed that I have a special place in my heart for all the games and media based on the Warhammer and Warhammer 40,000 universes. My first foray into the digital adaptions of the 40K universe was actually the first Dawn of War. I remember it blew my mind to see the tiny, digital versions of the miniatures I was collecting move and fight on my computer screen. It was the first game I had ever been a fanboy over and it is rightfully a classic of the Real-time strategy genre. When I was offered to review the newest installment, I was eager for the chance. 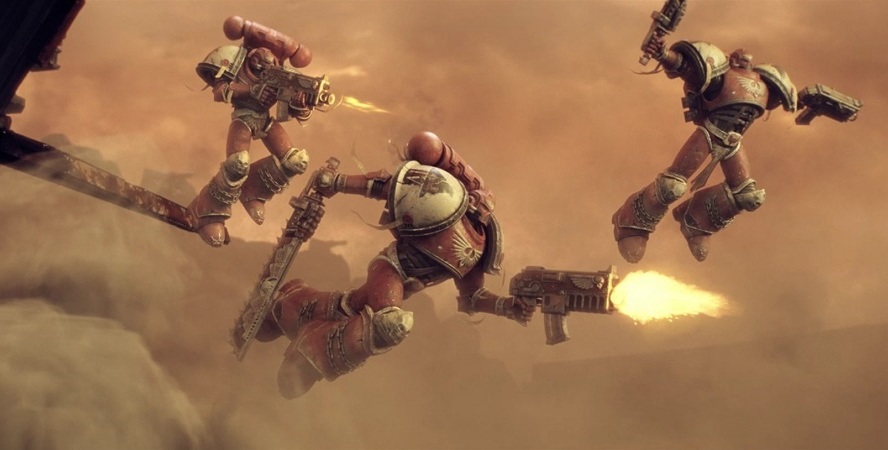 The plot for the game revolves around the three different factions (Orks, Space Marines, and Eldar) fighting over an Imperial controlled planet. The Orks are led by Warboss Gorgutz and are largely there because “smashin’ ‘umie stuff is fun”. The Space Marines, led by Chapter Master Gabriel Angelos, are there to answer the call for aid by the Imperial forces on the planet. The Eldar, led by Farseer Macha, are there largely to await the presence of a prophesised wander planet, Acheron, which is said to hold a weapon of immense power. Each of the factions have their goals shift and change with the arrival of the wandering planet which promises great reward for whomever might win its prize. 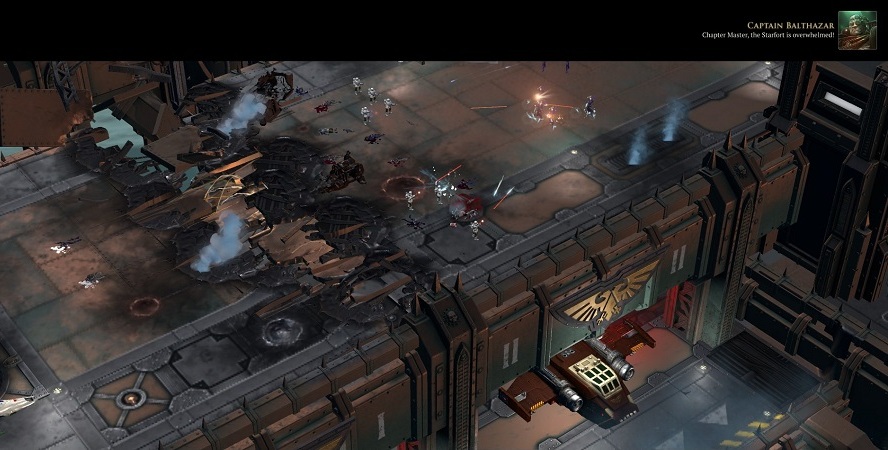 Despite what other, non-capsule-related, publications may write about in regards to the game’s narrative being ridiculous; I can largely attest that the game sticks within the canon of the 40K universe. Nothing here is too far-fetched within the established universe and, I would suggest, there is nothing here that is too egregious that would upset established 40K orthodoxy. My qualms with this story largely lie in its execution…

The writer for this game’s dialogue should be purged for heresy. I don’t think I’ve ever heard dialogue from 40K characters which has missed the mark just as much as the words I heard and read in this game. The Eldar sound like simpletons, the Orks sound far too gentle, and the Space Marines sound like they’re voxxing it in. Considering how often the tone and style of the universe is parodied in other places I’ve seen, I always assumed that it would be near impossible to get it wrong. This game proved to me otherwise but, credit where it’s due, there is some ambient propaganda dialogue in a couple of the singleplayer missions which is pretty spot on in recreating the much beloved grim dark of the 40K universe with very dry humour. Besides that mission, I really cannot recommend the writing in this game for anyone; not even die hard fans of the universe. 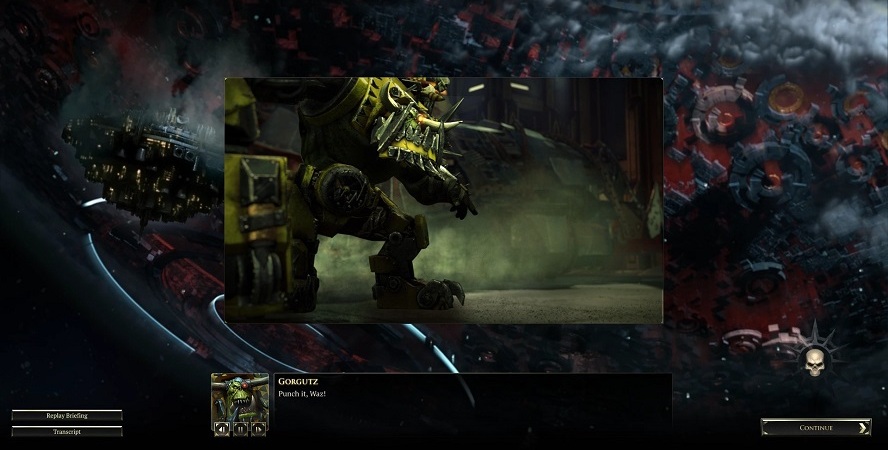 The gameplay largely follows along with the design of a more traditional real-time strategy game. You have a base with which you build up your army and go on the offensive which is a step away from Dawn of War II’s streamlined base building but more in line with the original Dawn of War. The resource streamlining has also been carried over from previous installments in the series with the player only needing to manage power and requisition points. These points are gained at a steady rate which can be increased by capturing and upgrading resource points on the map.

The new additions in this installment largely factor in around the addition of Multiplayer Online Battle Arena elements to the game proper. The game now features units which are categorised as either line or elite units. Your line units make up the bulk of your army and are made up of generally squads of troops or single vehicles. The elite units are generally very powerful named heroes or upgraded versions of line units. The elite units require a new resource called “elite points” which are the slowest resource to collect in the game as it steadily climbs. In multiplayer matches, you can capture points to increase this rate of collection but you’re stuck with a slow increase in singleplayer. 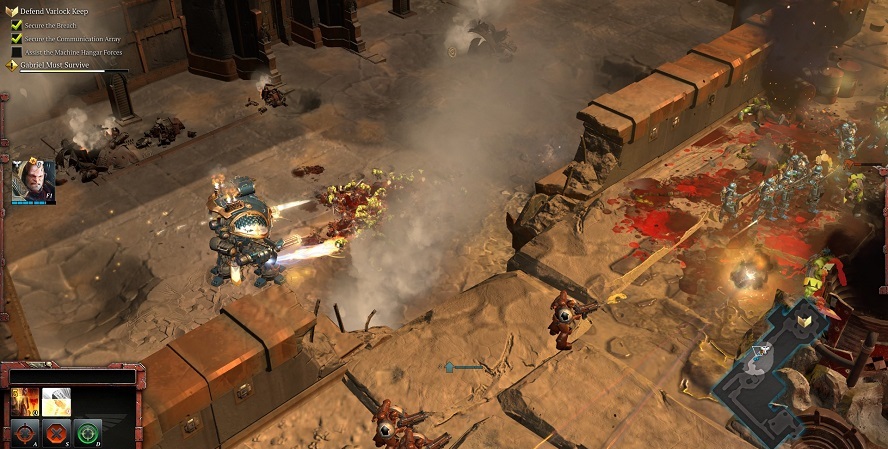 These elite units are generally the most easily identified element of MOBA games added to the Dawn of War mix. They have a number of special abilities to activate and deploy which generally make them incredibly agile and deadly. These abilities are generally quite powerful and help set them out as a cut above the regular line units.

My biggest gripe with this installment in the franchise, in gameplay terms, is the absolute fragility of the line units. Perhaps I’m more used to strategy games which allow me more time to micro-manage the units I control but I had great difficulty finding any use for the line units I built. I’ve never really gotten into the MOBA gaming scene, despite it’s popularity, but even accounting for players who are more suited to a faster clicks-per-minute playstyle, I’d say that there is too much micromanagement required here. For one thing, line units generally have a preferred method of engaging an enemy at either ranged or close combat. The rate at which line units can get mown down when they’re not fighting in their preferred engagement style essentially means I would spend a lot of battle just making sure my units were either running from or into the fray.

I am perfectly happy with Dawn of War playing around with MOBA mechanics in the series. In fact, I was quite impressed with the work that THQ did in Dawn of War II’s ‘Last Stand’ mode which was essentially a wave defence MOBA game. In that mode you managed only one unit, as you generally do for most MOBA games, which allows you to micro-manage the heck out of their abilities. In Dawn of War III, my focus is split between so many different units that every battle begins to feel like a chore to orchestrate. I feel that the game would have worked better if it had chosen to do more with less. 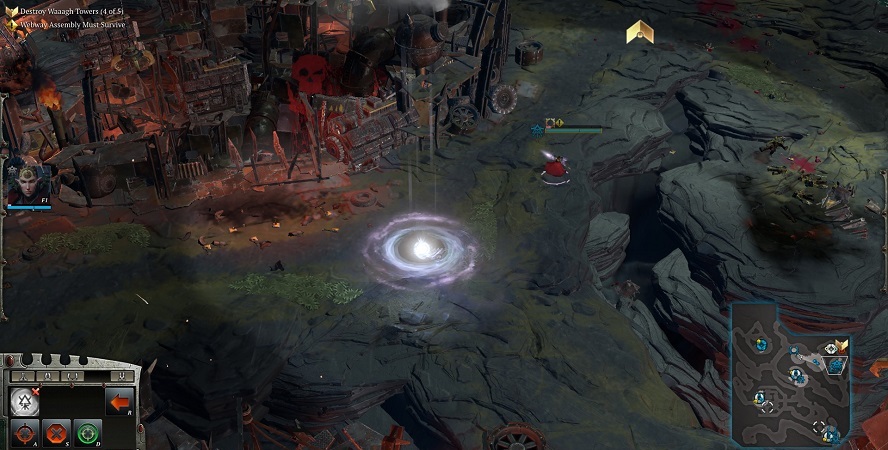 When I first saw the character design and animation in the reveal trailer for this game however far back, I was very excited by the approach taken in this game. The texturing, especially, on the howling banshee’s armour looked like an interesting cross between an artificial and an organic material. It seemed like an interesting way to visually compose the organic/inorganic wraithbone which the Eldar use in canon as their construction material for pretty much everything. It’s a shame that this level of detail doesn’t quite appear in the visual design of the units themselves on the battlefield.

The kill animations also don’t appear to make an appearance in the game anymore and it’s sad to see a unique and proud feature of this series go on its way. In fact, there appears to have been very little money left over for an animation budget at all as the singleplayer campaign narrative is largely told through expository dialogue over (largely) still images. Sure, these stills looked pretty cool and I understand resources were probably directed elsewhere but it would have been pretty awesome to see cutscenes play out in at least unit animation. 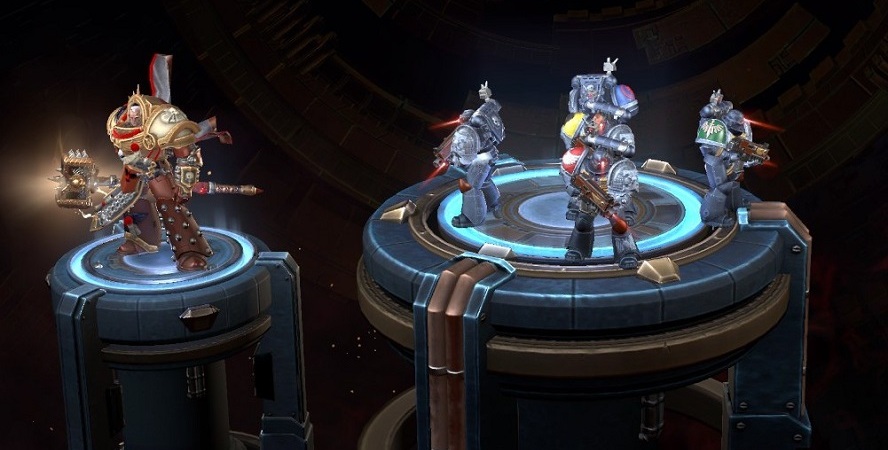 The soundtrack is fairly run of the mill, orchestral work which does a good job of being ambient sound design. There is however one exception: I absolutely love the soundtrack for the Orks. The heavy metal which plays whenever one of their waaagh! towers activate is perhaps the best and most in-character thing I’ve found in the entire game. Maybe it’s simply because it suits my tastes but I felt that the sound design in this regard really helped get me into the mindset and amped me up, as the Orks would say, “for a scrap!”. 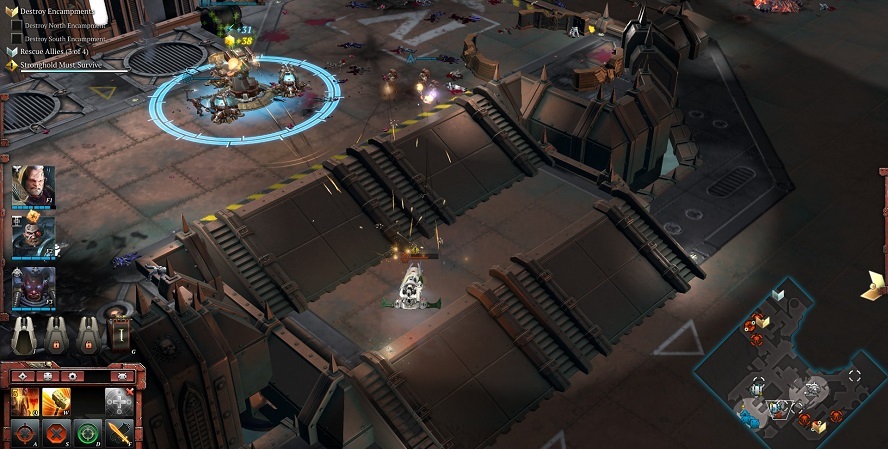 There is not really all that much that I like about this game, unfortunately. The story is a very lacklustre and timid affair with underwhelming writing across the board. The gameplay requires a level of micromanagement from me at a speed which I simply do not find fun to maintain. The sound design for playing the Orks is perhaps the one stroke of brilliance which gives this game any redeeming value for me. It breaks my heart to say this, but I cannot recommend Dawn of War III. I say that as a fan of the series and the 40K universe and although I wanted to love this game, it simply had very little to offer me. I would have preferred that this installment had either done more with the MOBA elements it had brought in or worked in other areas to mix up the gameplay but as it currently stands: it simply isn’t fun for me.
Capsule Computers review guidelines can be found here.

Dawn of War III is a disappointing entry with few virtues to speak of in a much beloved series.
2.5