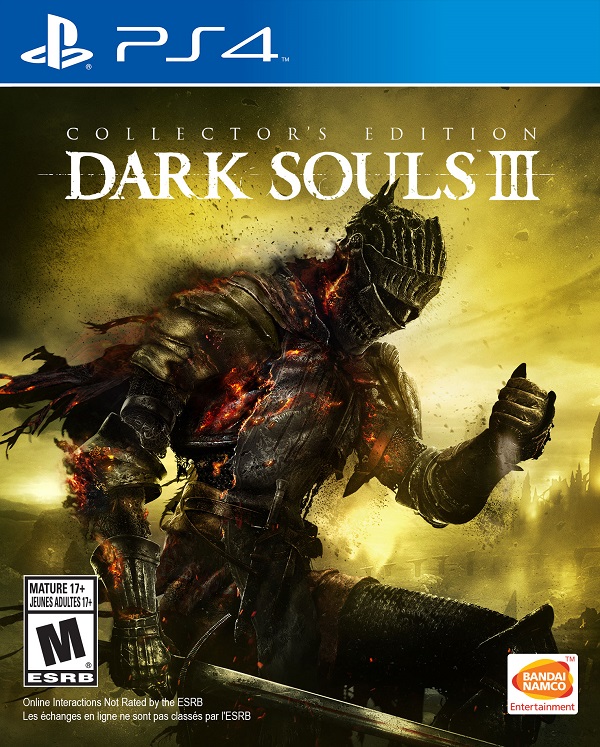 Once more From Software is back with another journey filled with death and estus filled flasks. After spending some time away from the series to work on Bloodborne, the company has returned with Dark Souls III. When the company first began these types of titles with Demon’s Souls, few could have seen the popularity that the franchise would achieve and now that the third game in the Dark Souls series has been released, is it what fans are looking for?

Players take on the role of an undead soldier known as the Ashen One and are informed that there is a threat to the first flame and if nothing is done, tit will be snuffed out. Set in the land of Lothric, players must travel the realm and find the Lords of Cinder who have neglected their duties and defeat them in order to potentially set what is going wrong with the world. 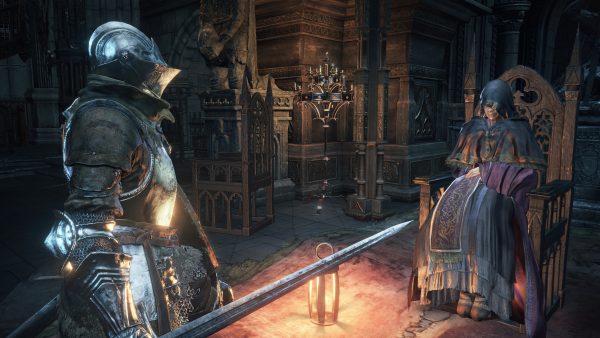 Now if this sounds fairly ambiguous then there is a good reason for that as we don’t really wish to spoil too much of Dark Souls III’s plot which, like previous games in the series, is spread thin and is mostly told through item history and various backstories that players will need to look into. In fact, this game feels as if it has the most fleshed out world in the series so far and that is thanks to a few aspects.

First and foremost, the side-quests that can be triggered in Dark Souls III are woven into the story in a better manner than they previously have been. Sure it is entirely possible to miss certain events which means that side-quest will just abruptly end and while there are fewer this time around, the way they are handled is much better and have some fairly substantial pay offs especially in regards to certain bosses and even the game’s ending. 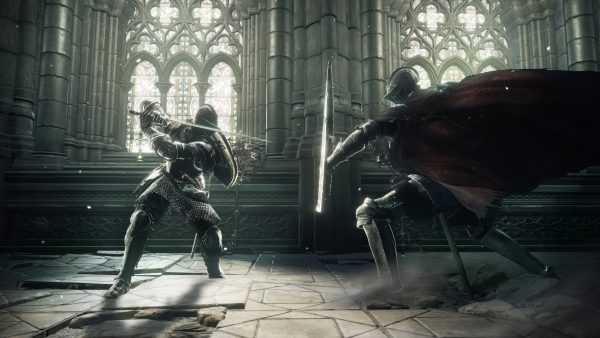 The other aspect comes from the fact that Dark Souls III is tied so incredibly closely with the world from the first game in the series. This does mean that those haven’t played the first Dark Souls will miss out on specific references and even characters that may or may not still be around, but for those who have there are plenty of nostalgic moments that will be occurring throughout the game. The title even answers a number of mysteries that have been hanging over the series for some time, though attempting to figure out everything that the story has to tell will require some close examination of aspects of the world that are quite easy to miss, but help tell a tale in a way that only From Software can.

In many ways Dark Souls III takes advantage of the various advancements that the company has made throughout the series by taking mechanics from both of the first games and enhancing it. First of all a mechanic taken from Bloodborne comes in the form of being able to charge heavy attacks with your equipped weapon and now each weapon that the player will find as they progress throughout the game has the ability to perform certain weapon arts and many of these techniques allow players to chain together faster and more interesting combos though since most of these systems require the weapon be wielded with both hands, players will sacrifice their chance at blocking attacks with their shield without quickly swapping back and forth. 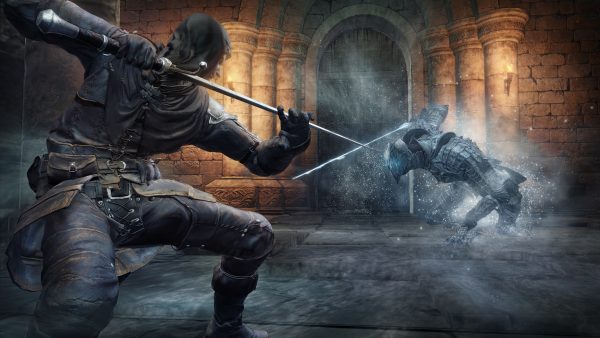 It is worth noting that some shields allow these weapon arts to be used while holding a weapon with one hand, but this is usually at the cost of being able to parry with said shield and considering the nature of being able to properly time parries in combat to turn the tide of battle instead of simply rolling out of the way to avoid harm, this comes at a price.

In similar fashion, players now also have to worry about a new gauge since magic spells no longer work on a charge system. Not only are players given your standard health healing Estus flask in Dark Souls III, they are also given an Ashen Estus flask at the start of the game. You see, the FP (Focus Point) system has returned and this means that not only are the aforementioned special attacks often a drain on this meter, any miracles, pyromancies, or other magical spells will drain this FP pool.  This means that while you may have spells attuned and the proper tool to cast said spells, if your FP pool is dry then it can only be refilled by resting at a bonfire or drinking from the blue Ashen Estus flask. With players now having the option to allot Estus charges between healing and FP, it often becomes a balancing act on how many times players will want to heal versus the spells they wish to cast or special moves they wish to use if they are more of a melee fighter than a spell cater. 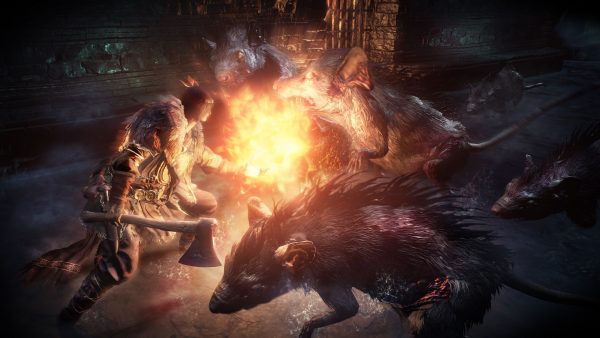 Various other aspects of Dark Souls III remain fairly similar with the player’s equipment load reaching over 70% resulting in slower rolling and thankfully one aspect that appeared in Dark Souls II has been removed entirely. Standard enemies will no longer disappear from an area like the previous game as they will continually respawn no matter how many times they are slain. This is a boon for both those who wish to grind in case they get stuck and also for those attempting to get rare drop items such as powerful equipment or useful items from certain enemy types.

Covenant factions have also been changed a bit this time around as players will find that they are no longer locked in to a faction. It is worth noting that joining a certain faction can lock you out of a separate one entirely unless approached in a certain manner, but factions are now handled as banners that can be equipped and swapped out in the menu. This means that players can freely swap between how they wish to act in Dark Souls III’s co-op and PVP systems without much of an issue. 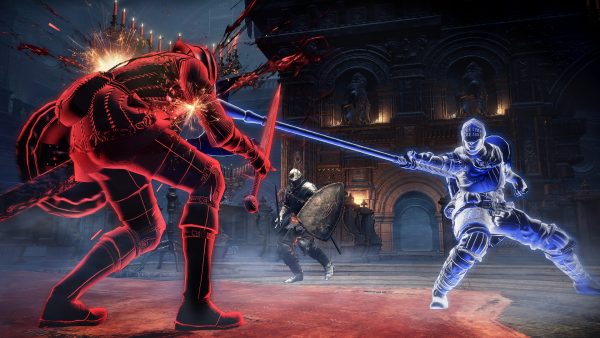 Speaking of that, unlike past games that featured things such as Humanity, Dark Souls III focuses on Embers. Players will find that after they defeat a boss, or use an Ember item, they will gain their Ember Form which provides a boost to their health bar and open them up for the game’s abundant online activities. You see, while Embered players can summon NPCs as well as other players into their world to help take on bosses or simply fight alongside one another and hostile players can also choose to invade you. Those who are without ember can roam without worry of invasion but you can invade others to try and steal their Ember as a hostile phantom.

Speaking of boss battles, players will be happy to hear that this game sports quite a number of unique feeling battles against all manners of creatures. There are various strategies and weak points to target as well as numerous optional bosses to take on if you feel like taking on a challenge, especially since one of the optional fights feels as if it is the toughest boss of the entire series. That being said, many of the bosses do seem to have smaller health pools than one would imagine and I found myself eliminating a few bosses without a single death. 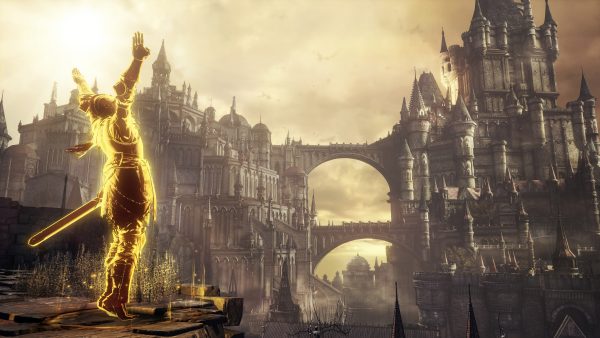 This leads to another aspect that is both good and bad depending on how you look at it. Dark Souls III feels like it is perhaps the easiest experience of the series so far. Sure this game is still incredibly hard but the layout of the levels and bonfires often provide the player with numerous outs. Shortcuts are oddly spaced out, with some shaving off no more than a few seconds or slipping past a few foes while others can clear out entire sections of a map. Sure it is always possible that players may miss these shortcuts, but exploration is key in these games.

As far as the bonfires are concerned, there are often numerous checkpoints scattered throughout an area and many of these are so close together that you can literally see the next bonfire point from where you previously rested.  This lowers the tension of the game but thanks to the unpredictable nature of enemies, don’t think this is a cakewalk by any means. 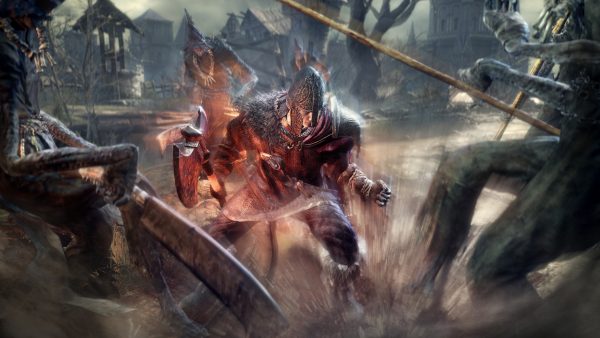 While Dark Souls III features a number of great advancements in the series, there are still a number of drawbacks. Poor camera controls remain an issue that plagues the game while locking onto opponents is also frustratingly difficult thanks to the game constantly losing a lock on whenever your target decides to move any faster than a crawl. It also is worth noting that the game’s servers are still rather rough and although the issue did appear less often later in the game, that any time a disconnect with the server occurred the game would immediately boot back to the menu, leaving my character in a potentially deadly situation beyond my control.

Although players will find that they are often returning back to the Firelink Shrine which serves as a central hub where players level up, purchase items, upgrade weapons, etc., the level design in Dark Souls III remains almost entirely connected. Every zone that players will be traveling through will have multiple paths to explore and while they will almost always lead to the same area, its finding the secrets and items hidden in these different paths that are part of the fun. 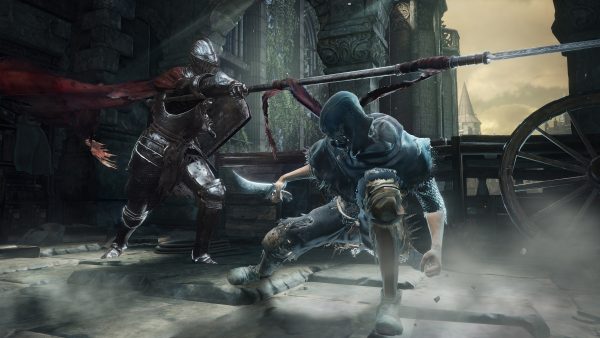 In fact, the levels are so nicely designed that players may find themselves facing off against bosses in a completely different order than others since some foes can be completely bypassed if you don’t take a certain path at first. This level of detail to the level design is reflected with some amazing looking boss designs and standard foes as well, though it does feel like there could have been a bit more variety with standard enemies as some foes are repeatedly scattered throughout various stages.

The soundtrack in this game is also very fitting for what From Software is known for. This title features some extremely impressive sounding boss battle themes that add an extra layer of intensity to every fight. As for the voice work, the minimal amount that is presented is handled well by the voice actors.

Dark Souls III may be a bit easier than some were expecting and depending on how much of a challenge you find it, you’ll likely only clock in at around thirty hours before finishing the game the first time and that is even counting exploring optional areas and bosses, but this is a finely crafted experience that fans have been hoping for. With fine tuning to the combat system, extremely impressive level design, and plenty of nostalgia for longtime fans Dark Souls III is a game with so much detail that it is easy to get lost in while trudging onwards towards the next challenge.
Capsule Computers review guidelines can be found here.