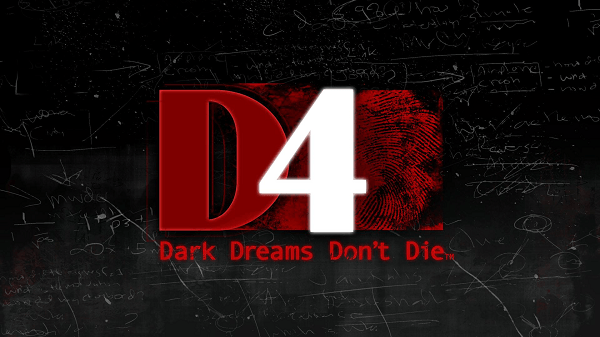 Overview
There are many types of games in this industry, but few titles blended together wacky ideas and a serious storyline together as well as Swery65 managed to with Deadly Premonition. Since that release, Swery has been off the radar for a bit until it was revealed he was working on a new game, D4: Dark Dreams Don’t Die. Being a game that can be played entirely with the Kinect and also one that was given a sudden release, does D4: Dark Dreams Don’t Die deserve your attention?

Story
David Young is a former officer with the Boston Police Department but when his wife, Little Peggy, is killed thanks to a new and strange drug called Real Blood circulating in the streets, David quits the force in order to become a private detective whose only goal is to solve the mystery of his wife’s murder. With his only memory from the night being Little Peggy’s final words, “Look for D,” Young closes himself away from the world. 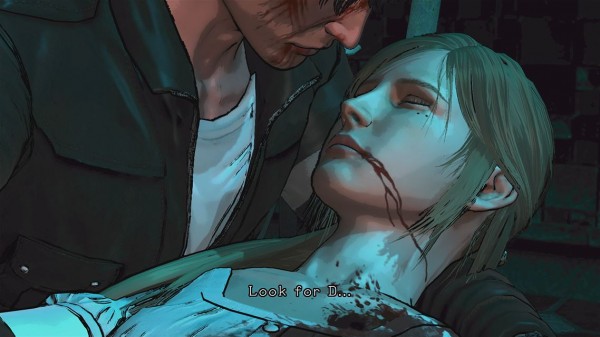 While this may sound fairly straightforward and is a common theme for cop revenge stories, you forget that this is Swery65. Not only does David have the ability to “Dive” into the past with the use of items called Mementos, but it appears that he might even be able to change the way these events unfold. While that may sound strange, it is only the tip of the iceberg when you realize that David lives with a freeloading girl who acts like a cat and picks up groceries and is helped out by a man capable of destroying a pantry full of food in under a minute.

While the majority of D4: Dark Dreams Don’t Die takes place within David’s apartment and on a plane during these initial episodes, the way the story is told through David’s eyes is superb. He continuously battles with haunting memories of Little Peggy as he hallucinates her existence and even while you explore areas, tidbits of information can be revealed about even the most mundane objects in David’s life. As you walk around his apartment, both your partner and the aforementioned freeloader freely move around the house and can even leave the area and return, giving a lifelike feeling to the world. 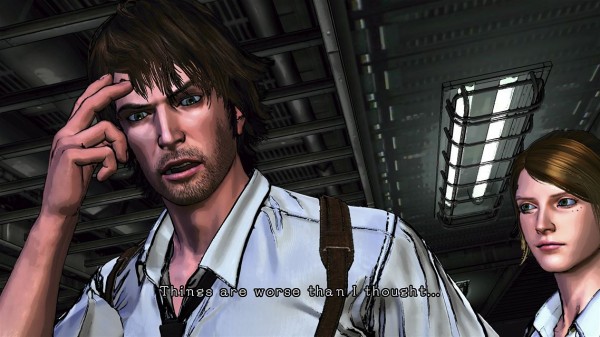 The odd and quirky nature that Swery is known for runs rampant throughout D4 and it is a joy to behold, even though there are some segments that are a bit of a slog to get through. With plenty of great comedy, an intriguing storyline with noteworthy twists, and outlandish characters that are given more depth than you would expect, D4 is off to a great start here. Of course, if you happen to have a low tolerance for strange things you might not enjoy the random and wonderful things that occur throughout the story, but let me say that you are really missing out.

Gameplay
Now D4: Dark Dreams Don’t Die can be played with either the Kinect or with the controller and players are able to switch between each control method at any time. In essence, D4 is a point and click adventure game where the player must navigate through their given area, interacting with what is available while completing various objectives. 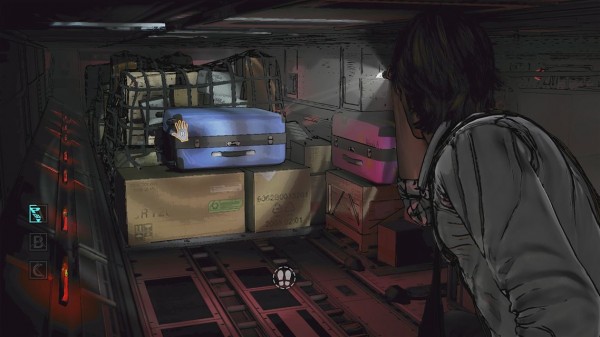 What makes this a fun task is the fact that the Kinect works wonderfully with D4. Opening doors, flipping through paperwork, lifting items, and more are all done with a swipe of the hand. Want to observe an object or push it away? Simply close your hand or push forward. The game responds to both the player’s left and right hands so you can choose your dominant hand if you so wish. The only part that is slightly annoying when it comes to the Kinect navigation is that to turn left or right, the player must swipe at the edge of the screen where with the controller, turning is as simple as pushing a shoulder button.

As David explores, he will interact with numerous simple objects, all of which have extra pieces of description as mentioned earlier, as well as some of the craziest NPCs in recent memory. Talking with these characters and participating in their “side-cases”, which range from answering plane trivia to running up and down aisles to check for dangers, is a delight, even if they can be a bit repetitive. 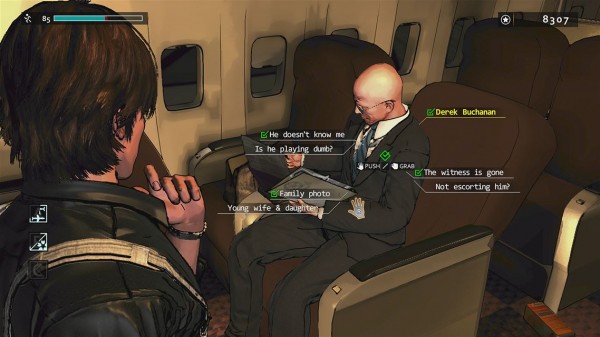 When you are investigating, you can activate a “Vision” mode which will highlight objects that can be interacted with as well as the next clue in the case. But be careful, every action takes some of David’s stamina and if you run out, it is game over. Both Vision and Stamina have meters that can be refilled by drinking fluids or eating food respectively and although they aren’t really a bothersome mechanic, they feel a bit unnecessary, even if food is readily available from a cat.

The girl at your apartment and this cat sell everything from food and alcohol to clothing and additional records from the game’s soundtrack. Players can not only purchase clothing to change David’s look, which boosts and lowers his stamina, health, and vision meters depending on the outfit, but also change the look three other main characters in the game, adding some nice motivation for completionists. 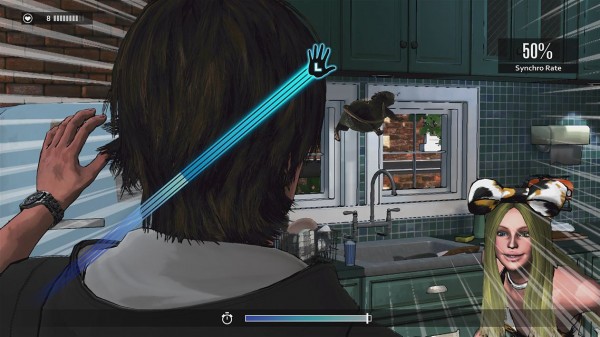 Outside of gathering items and completing objectives, the best part of D4: Dark Dreams Don’t Die involve the action sequences. These are QTE moments that are absolutely wonderful to experience with the Kinect, and actually a hassle to try and complete with the controller. Rarely do Kinect games that require fast motions work well, but D4 pulls it off expertly. Players will need to swipe at the screen to knock objects out of the air, mimic grabs and dodges, and more to finish off these hilarious action packed sequences.

Visuals & Audio
D4: Dark Dreams Don’t Die uses a cel-shaded comic style design throughout the story and it works to the game’s benefit. While not the most awe inspiring level of detail is available through this art style, the humorous nature of the events that occur throughout the game really work well with this style. The aforementioned action sequences are also hilarious to watch as the ridiculous action choreography really shines in these moments. 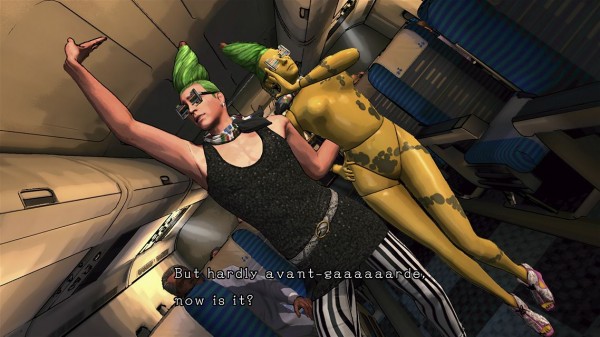 The title also boasts some outlandish, but fitting, voice acting. Not only does David feature a perfect Boston sounding accent, but many of the strange characters you come across have their own, just as odd sounding, voice work. It also helps that the title sports an amazing soundtrack that ranges from fitting atmospheric tones and piano laden themes to even rock sequences that play out during action scenes.

Overall
It came as quite a surprise when D4: Dark Dreams Don’t Die was released suddenly, but it shouldn’t come as too much of a surprise to learn that Swery has not lost a step when it comes to creating an enjoyable quirky storyline with enough twists and a unique enough look to really stand out. Add on the fact that the Kinect really shines with D4 and you have a story that will hopefully be continuing sometime in the future, especially since this one happens to end on a cliffhanger.