Cubemen is a strategy game crossing the RTS (Real Time Strategy) and Tower Defence genres. This game does away with the trappings of graphics and animations and goes for pure strategy; treading just this side of the line between abstract and realism.

This game is all about the strategy. You create men by spending points, and gain points by taking down the opposition. As time goes on, and you accrue more points, you’ll be able to send out more powerful units to defend your base from the oncoming waves of enemies. 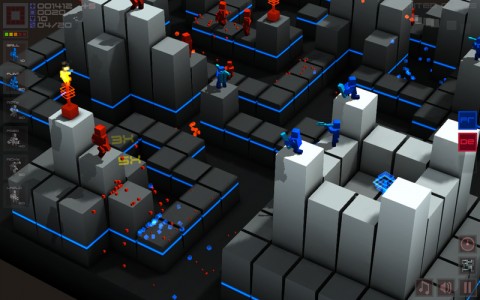 There are a total of 7 different units at your disposal, costing progressively more, and becoming equally more powerful.

Each unit has a numer key associated with it, letting you quickly and easily deploy your men onto the battlefield. Once you select which unit you want to place, any tile he can access will be indicated by a blue square in it’s centre. Select the destination by clicking one of these tiles. While the path-finding AI of the game is usually fine, there are some levels with a particularly tricky layout, causing units to attempt to scale unscalable walls or the like.

As soon as the unit is created, he will move to this target position, and fire upon any enemy within range. You can select him by clicking on the tile he is currently on. This will show you his health, as well as his range (as a circle) and current direction he is facing. While selected, you can then tell him to move to a new position, or, using the controls shown on the bottom-left of the screen, switch between “furthest enemy” and “nearest enemy” targeting modes. There are times when it looks like a unit is just about in range of an enemy unit, but doesn’t fire, which can be a little annoying.

A total of 20 waves of enemies will assault your base, sometimes from more than one spawning position on a map. Each wave’s units will increase in their ability to defend themselves, staring with helpless little guys, and ramping up to giants who call down a rain of fire on your units. Once you’ve got the basics down, however, these will become no match for your tactics. 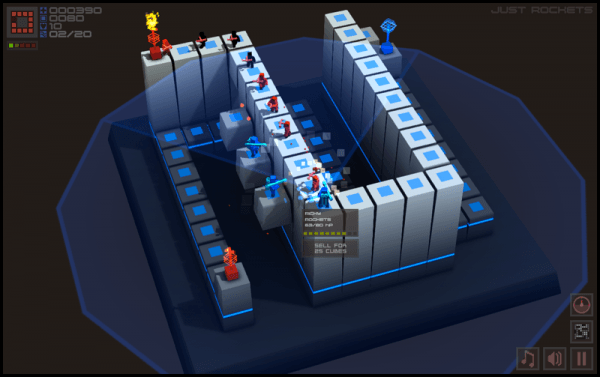 The levels are varied, and numerous, each posing a new challenge to work around; a new type of enemy, a problematic layout, or just more enemy units to defeat with each wave. They are ordered in ascending difficulty, and are marked from “Easy” to “Insane” as you progress. This ordering, however, is a little off at times. Certain levels, while they may seem more complex and challenging, end up being easier than others in the same difficulty category. There are also one or two levels in the “Easy” category that I found impossible until I’d played through some of the harder levels, and figured out the basic strategy of the game.

Some maps are also simply too slow, or too hard, to have the patience to beat. When it takes you half an hour to figure out that you’re going to lose, it can be hard to give it another go. At the same time, most of the other levels, once you’ve got into the groove of the game, are just too easy.

There is also a “Skirmish” mode, in which you play against an AI bot, or player online, as equals, both sending out units, and at the same time, automatically sending out waves to attack your opponent’s base. There is a key difference here, however. You may only place units at certain positions. This leads to a certain amount of line-drawing, you pushing to take a position here, and falling back in retreat there.

Unfortunately, because you are both so equally matched, games can get very even, leaving you playing for quite a while without any meaningful progress. That, paired with seemingly no one else actually playing online for you to play with, makes for quite a dry experience in this mode. Now, I have heard talk about player-created maps, and I’m sure as the game picks up popularity the lobbies will start filling up with people ready to take you on.

While playing, you can rotate the camera around the level as well as zoom in, which is useful. Playing the windows version at least, I found I had to tweak the settings to let me do this with any speed, however. Also, at times the zoom feature wouldn’t let me get any closer to the action, even though I was still a ways out. At times, this made it difficult to select a particular unit I needed to move. 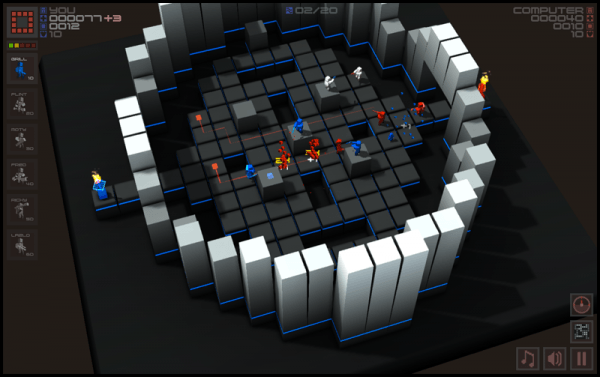 The art style of this game  is simple and to the point. It’s called “Cubemen” for a reason. Everything, from the level and units, even down to the particles and projectiles, there’s a lot of cubes in this game. Everything has a classy, soft, yet precise style, keeping everything clear, but looking nice. The particle effects look great, and the way every fired projectile is a translucent cube shows a nice attention to detail, and committal to the style.

The music was passable, but very quiet, and with no way of turning it up. The sound effects were simple and got the job done. They can both be muted on the main game screen using two simple buttons.

You can also switch views using a simple button press, toggling “top-down” mode on or off. There’s also a button for increasing and decreasing game speed. I always moved it up to top speed, though; on some levels, the waves take a long time to get anywhere near your units, and speeding up the gae took away some of this tedium.

It’s hard to rate this game. On the one hand, the gameplay itself was pretty fun. The mechanics worked well, and the strategy element was well realised. The game also has a lot of problems, however. With more than a few bugs, as well as some odd control and design choices, make it hard to wholeheartedly recommend this game.

It was originally created for a competition, and it feels like it lacks the polish of a fully-realised (and finished) game. If you like your strategy, and are interested by the cross-genre mix of RTS and Tower Defence, then by all means, pick this one up. But if you’re looking for something to suck your time away, then you might be looking for something a little more… complete.