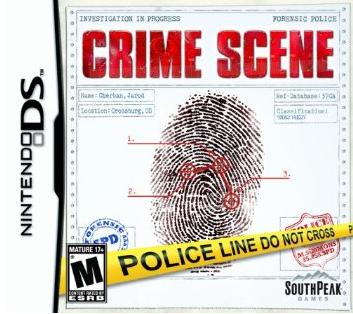 You play as a freshly hired forensic detective, Matt Simmons.  The whole problem is, the only reason there was even a job opening in the first place is because the man who did your job before you, is dead.  Not only that but your first case is to figure out exactly what happened to the man and his wife.

You are not alone however, as your partner Pete have a large amount of tools to discover what crime took place.  In this game be prepared to find out that not everything as it seems, as nearly every case is different than the initial analysis.

The characters themselves though that you will work with and interview are unfortunately very bland.  Their personalities are far from unique with many of the characters suffering from extreme similarities that you will be wondering who put on a disguise in this mystery.  It would have been more interesting to see characters with a full range of emotions dealing with some of the crime scenes and discoveries throughout the story. 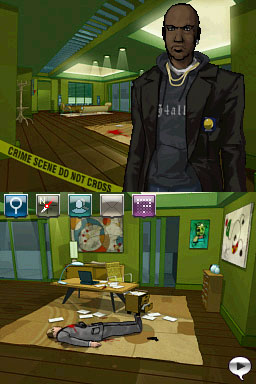 Also there is no fluid storyline throughout the game beyond the characters in which you play.  None of the five cases themselves have any connection with one another which is a shame due to the fact that it could have been much more intriguing if it ended up becoming some sort of conspiracy.

Graphics:
The crime scenes you will experience are about as dark and gritty as you would find in a real life crime scene of that nature. Couple that with the extensive amount of tools at your disposal that look just as their real life counterparts everything in the game has an acceptable appearance.  But the characters themselves never move.  There isn’t even a bit of mouth movement on said characters, they are simply a bit of still art.

Sound:
As far as sound goes in the game there are no voice overs provided.  Being that the game is very text heavy, sufficient voice over work would probably have pushed the limits of the DS but it would have been a nice addition to help break up the monotony of the background music.

If you’ve ever stayed in an elevator for a long enough time you would hear plenty of various bits of music you’d hear in this game.  The music is completely in tones without any actual instruments playing so it is hard to call it an instrumental.  Then again there is also no vocals; while this doesn’t take away from the game or distract from solving the mysteries it would not hurt to put some form of variety in the music department. 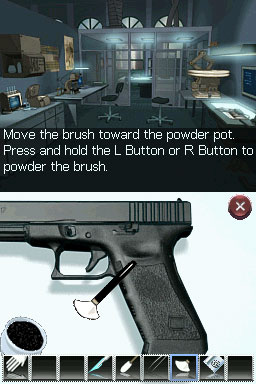 Gameplay:
Now if you have played any point and click adventure games in the past, you should know roughly what to expect in South Peak’s Crime Scene. Though they have also included a variety of mini games to help solve the crimes as well; by gathering evidence, analyzing it, and even reporting it to your boss.

Unfortunately due to the fact that you are newly hired, there is literally only a tad bit of information given to you on how to perform said mini games. Your partner will walk you through the finer points of each bit of evidence gathering and introduce new tools which will be unlocked as you go along. This is a problem however as when you first begin to learn how to use a brand new tool; you will make a lot, and I mean a lot of mistakes. There will be times that you will follow the first set of instructions only to mess up later on due to the simple instructions provided.

Now this is all well and good, if only there was not the factor of credibility involved. As in any job in the real world if you make too many mistakes there are consequences and the same can be said for Crime Scene. When you begin a case you have a blue bar that contains a certain amount of credibility, and when you perform tasks incorrectly the bar drops down while performing certain tasks correctly will raise your credibility. 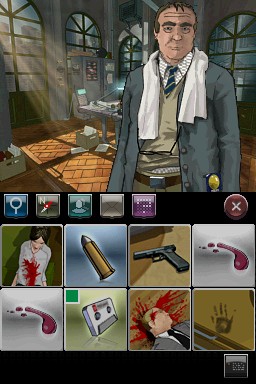 Not only that but you will be graded on the end of each chapter of a case by how much credibility you have remaining. This then equals out to be your final grade for said case. Not only that but due to the demanding need for accuracy in a forensic detective’s line of work if you’re credibility falls to zero, you will be fired and it will result in a game over.

Thanks to the trial and error way of learning how to advance through the mini games, certain parts will require multiple attempts simply due to failing too many times. This could have been solved if there was an additional tutorial mode or practice mode so players have the chance to actually learn how to perform the actions in the game without worry of losing credibility.

Of course enough about how your colleagues see you, how about how you see the outcomes of the crimes? Arriving on the crime scene you will find quite the gruesome scene. Though you must progress by looking around the screen with your stylus and zooming into various parts of the scene when the pointer turns into an eye to investigate further.

You can only investigate areas that will contain an important clue towards the case and then begins the various mini games. Each mini game will contain a variety of forensic tools to find the evidence for the case. Such tools are cotton swabs for fluids, a pair of tweezers for bullets and fragments, fingerprint dusting kit, and a scalpel. Later in the game your tools become much more high tech, including a light to detect dried fluids, and to pull footprints off of a floor. 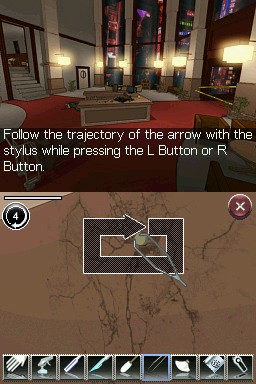 Of course pulling various bits of evidence out of the crime scene is all well and good but what do all of these various clues mean? After gathering all the evidence available, you must analyze the clues you have found. This is done through another set of mini games, such as taking pictures of a bullet and analyzing the ballistics to determine what type of firearm it came from. Then comparing various charts to match the pictures together and determine a murder weapon. Or matching fingerprints with those in a database, requiring exact overlays of the two prints to determine whom they belong too.

These mini games work well within the game and even with the large amount of time you will spend playing they will not begin to feel boring due to the sense of urgency you will feel to solve the case. There is another issue however; due to the fact that the DS is not the most accurate of touch screen recognition with the stylus. Precise movements on the touch screen will sometimes falter and result in credibility loss when you yourself performed the action correctly. The tweezers and the cotton swab are the most criminal in this case. Both of these tools require precise motion which is in turn can force many credibility losses.

Overall:
Though it has its flaws, Crime Scene by South Peak is a point and click mystery game with quite the adult feel to it. There are some problems when it comes to recognition and the various characters you will meet in the game have as much of a personality of the bodies you are investigating. The surprisingly gritty storyline is a major draw for this game due to the amount of realism shown throughout the game.

I give Crime Scene for the Nintendo DS