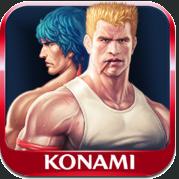 Overview
Contra is one of the most known and loved franchises in this entire industry. Just saying the name to specific groups will instantly start chatter of speed-runs and memories of the classic, which is the main reason I was so excited to sit down with a brand new re-imagining. Punchbox have brought us Contra: Evolution for the iOS marketplace, with improved visuals and more accessible gameplay. Does this new version pull off a modern, touchscreen play-style, or is this platform just not cut out for a game with such high expectations. Let’s find out.

Gameplay
I really don’t have to detail a story for this title, as if you don’t know the small plot going on within Contra by now, you need to go back and play the original or one of the many ports before even touching this remake. I don’t mean to come off as elitest with that statement, as in all honesty, you would have had to have played the classic to appreciate the offerings within Evolution. Red Falcon is attacking the Earth, and Lance and Bill are humanity’s last hope. As usual, the objective is to kick ass in style, with two buff protagonists that are now world famous in the gaming scene. 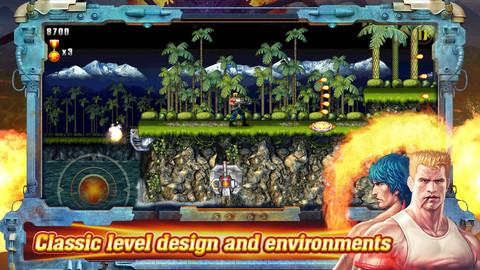 The iOS is a tricky platform to port any game like Contra on however, but being a remake, exceptions can be made for this version’s shortcomings. To better explain, the run and gun action has been left nearly untouched and each stage feels the same – gameplay wise, aside from a few tweaks to difficulty. Players can access most of the weapons they need to from the start, using a new currency system based on coins and gems to upgrade. Sure, its not what we are used to, but this is the iOS, a platform made for short-burst gameplay sessions – it is completely forgivable. Hardcore fans will notice quickly that the difficulty of the game has taken a massive nerfing, with less flying bullets and a quicker progression rate. With this change comes the greatest sin one can do to a classic however, and that is to apply micro-transactions for extra lives and more powerful weaponry.

Every single time you lose your little stockpile of lives, the game will try to persuade the player to buy more gems and coins to make their life easier. I could understand this slightly if this were a freemium title – even though I don’t approve of the idea of it, but at times Evolution feels like it is a casino, charging an entry fee for the player to lose money. Evolution has been made more accessible in several ways, but throws the modern idea of a save or checkpoint system out the window in order to get the consumer to pay out of pocket. Sure, when you start – you already have some gems and coins to work with, but you can go through those quickly, meaning the further you get – the more you are going to want to pay once your loot has run dry. If you say no to these tactics, well….its game over, friend. I could write on and on about how sad it is to see a publisher like Punchbox Studios do this to a classic – and a well structured version of one at that. This review is meant to speak about the work of the developer however, so let’s get to the good stuff. 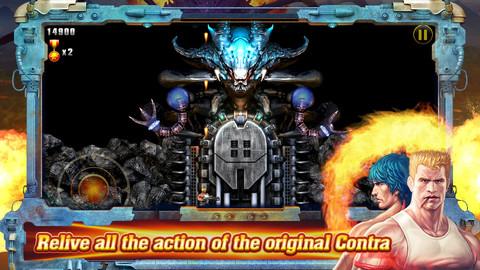 The control system is one of the finest features of Contra: Evolution. Is it perfect? No. There are three different schemes to pick from, with a fixed and loose analog, as well as the classic D-Pad. The D-Pad, being touch driven can be a bit of a headache, as it has problems when Bill or Lance are trying to precisely jump diagonally. The fixed method is much better, but leaves some of the stage blocked due to your thumb covering it up. The loose method however allows for placement to be anywhere on the left side of the screen, and provides a much more fluid experience as a result. Yeah, I had a few moments of frustration as Contra is a game that demands tighter controls and is not and will never be fit for a touchscreen device, but the choices given and decent performance of the game as a whole allow the player to pick their own preference and run with it. Despite my own complaints, most of these layouts can easily be adapted to as auto-fire is on by default (and can also be turned off if you are up for the challenge), which means you will spend less time worrying about tapping the right portion of the screen, and more time aiming that gun at the next target. 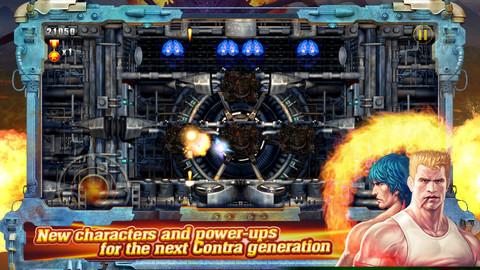 Mission Mode comes as a bonus, which is more for score driven gamers out there that want to test their skills on three different difficulty challenges. If this is your thing – than have at it and enjoy. Otherwise, some could think of this mode as a supplemental addition that serves little purpose other than increasing the chances you will spend money on more lives and upgrades. On the upside, there are a few bonus unlocks such as characters and other quirks, so you are being rewarded at times, just not as much compared to other remakes such as Double Dragon Neon.

Visuals and Audio
The most exciting experience of this new breed of Contra is seeing how the new stages and even character models look. Instead of the 8-bit sprites of the past, Bill and Lance have been given an incredible facelift that stays true to their characters, with a heavily detailed, slightly cel-shaded model ready to tear through the game. The stages look just as good and have been remade from the ground-up, bearing a heavy resemblance to the past title to keep that nostalgic vibe, but pulling off a much more polished and colorful look that is pleasing on the eye. 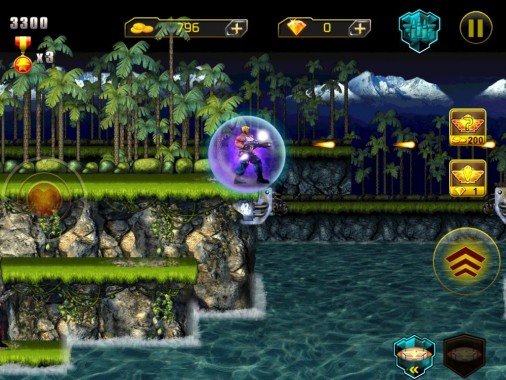 The soundtrack is made up of remixed tracks from the classic- and all were done quite well and fit with the new art style perfectly. The only problem is that these tunes are all short, and looping is apparenent each time the track replays. Not a big deal, but still noticable. Sound effects sound as they should however, with guns and bullets blaring out effectively, and explosions setting the scene yet again for one crazed battlefield that our heroes must run through.

Overall
Contra: Evolution has almost everything we would want in a remake, as minor flaws aside, it plays better than most of these types of re-releases on the iOS and the work of the developers shine through when it comes to the heavy amount of control customization that the player can choose from. The downside is that retro gamers are going to be the audience here – and when you replace the Konami Code with a very expensive in-app purchase, you have sucked a good amount of spirit out of the classic. Contra has evolved over the years, but Evolution should not mean that an old favorite should adapt to deceitful and borderline offensive tactics. If you want to see a solid recreation, by all means pick this title up as the price is right. Those who are wanting to find a better experience however that doesn’t try to trick your wallet should grab that old cartridge and blow out the dust however, as this remake’s charms are only available to the highest bidder.