Overview:
In a world where games seem to be becoming more and more complicated every month that passes, the pure joy of dungeon exploration has become something of a lost art. Though those who enjoy wandering through countless dungeons and doing battle with the creatures inside of it should rejoice because ClaDun x2 was released by NIS America to the PlayStation Network in NA just a few weeks ago.

A sequel to last year’s ClaDun: This is an RPG, ClaDun x2 does a few things different from the original title, but with a name which is short for Classic Dungeon you know that there is going to be some good ol’ fashioned crawling involved. Now with more customization than ever and a few changes to the basic structure, how does this dungeon crawling RPG fare?

Story:
The world of ClaDun x2 is one that takes place in the land of Arcanus Cella. The place seems normal at first minus the mystical portal that transports the player to various dungeons. There are a few strange things about Arcanus Cella though, namely the fact that anyone who manages to enter the world is imprisoned there due to the fact that there is simply no way to escape.

Players are introduced to this alarming fact by a strange character named Parchmin who is only the tip of the iceberg as far as strange characters go. You are informed that there is no way out of Arcanus Cella and that most people spend time going through the dungeons. Which means that there are dungeons to be explored and levels to be gained, but all the while the player must seek a way to escape from this land they have no memory of entering. 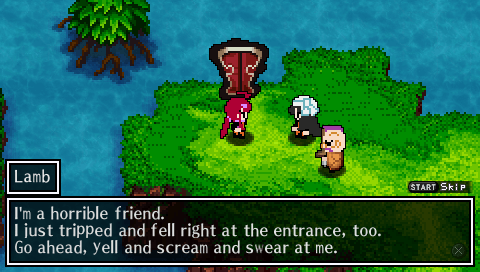 The story is unfortunately rather simplistic at surface value. However the personalities of the various characters you will meet up with do more than make up for the basic storyline. The character dialog is perhaps some of the funniest and most life-like you can find in a game such as this. As you progress through the storyline the characters become quite fleshed out and quirky. It also helps that their tiny pixelated forms are so opposite of their realistic characteristics.

While the characters are the highlight of the story, the pacing is absolutely terrible. At the begging of the game things move at a decent developing pace, however then you will stumble upon one of the bigger shortcomings in ClaDun x2… the fact that you could travel through numerous dungeons and complete them only to hear absolutely nothing about story progression.

Then after going through a drought of development, you will be slammed with a lot of information at once and details that could have easily have been fleshed out over the past few dungeons to help break up the constant exploration. Now many may enjoy venturing through dungeons for a long time without story development but others will simply be trudging through levels hoping to hear more dialog from the unique characters, which may pad the game length a bit is something of a drawback. 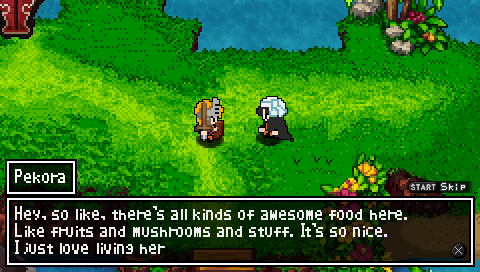 Graphics:
Initial impressions some may have of seeing the art design for ClaDun x2 is either falling immediately in love with the game’s retro style or hate it. Everything is designed in retro pixilation with every character looking like something someone zoomed in on in paint and drew dot by dot. While this may drive some away, those who can appreciate the art style will find that the game pulls off everything amazingly well. The pixilated characters have as much life in them as you would find in a game with modern graphics, though it does hurt a little as none of them have facial expressions besides two eyes.

The world of ClaDun X2 is quite impressive looking and there is a decent amount of variety in the dungeons that you will be spending most of your time crawling through. The enemy monsters have a large variety but do suffer from color palette changes, though the game explains this by saying certain colored monsters are stronger (somewhat poking fun at itself). For those that can appreciate the retro graphics for what they are, they will find something of a work of art, especially when they begin to dabble in creation themselves.

Audio:
There isn’t a whole lot that can be said about the game’s voice acting, simply because there isn’t any. The game makes up for it however with some rather impressive background music. Players are given a choice in the option menu as to whether they want to listen to retro music or real music which definitely provides two different flavors. 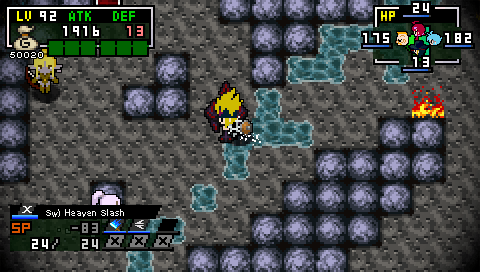 Real music will sound like other NIS America games and have an impressive adventure feel to them while Retro will sound like something you would have heard back during the Super Nintendo days with retro renditions of the real music. The retro music does lend itself well to the overall aesthetic of ClaDun x2, but modern gamers may enjoy hearing modern music as well which makes this a great option for NIS America to have included.

Gameplay:
Now before you begin your adventure in the world of ClaDun x2, you have to create your character. Of course you will need to name your character whatever you want to choose or cycle through a random name generator which will likely be something you will end up doing later on. After picking your name or making your own you will need to pick a gender and basic appearance as well as a job class to specialize in. Each class has special strengths, affinities for weapons and special skills that can be learned.

Of course that is only a drop in the bucket of how much customization is available in ClaDun x2. While you can pick any type of hair style, skin color and clothing options for your character you can even go to the point of completely designing your very own character from scratch through the customization feature. This means you could make your very own original creation or make a character similar to something you may remember from childhood. Hell, you could even do other video game characters if you promise not to tell.

If you could only customize your character that would be enough for some people, but there is much more to create than that. ClaDun x2 contains an amazing amount of customization options which allow you to edit everything, you can change the way your weapons look and your armor even which means you could walk around swinging a giant piece of tuna while wearing garbage can lids if you wanted to design that. The creatures shall fear your fishy weapon of destruction. 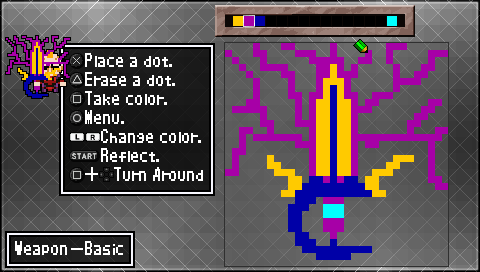 Now the dungeons you enter will contain plenty of winding paths and various details which will be chock full of monsters and NPCs that you can speak with. Killing enemies is done through simple combat that can be either hack and slash or magic or even special skills that your character can learn for specific weapon types. Combat can be rather basic at times, mostly involving hit and run tactics but can be very enjoyable, if not a little frustrating at times when the difficulty spikes.

There is much more to combat than skills and hack and slash however. There is also something known as the magic circle feature. While you can only actually enter a dungeon playing as one character at a time, you will have a whole group of other characters in your magic circle which will not only provide you extra bonuses but also level up these side characters. The player will have access to the magic circle grid and can place their secondary characters, which again they create themselves, onto specific parts of that grid.

Depending on the secondary character’s position in the circle, they will take damage in that direction as well as help out your main character in a number of different ways. Plus characters can have extra items attached to the grid which will increase various stats that will help out your character in the long run. Also the characters that you bring in to fight with you as a part of your magic circle will level up as well, which will make them not only stronger for when you have to use them, but provide an extensive amount of micromanagement.

Besides the storyline dungeons, which occasionally don’t do much to advance the story, there are also other dungeons which are designed specifically for people who want to tackle a challenge or venture into an extremely long dungeon. Players can enter a randomly created dungeon which will be 99 floors long and will get more difficult the further along you get. There are also dungeons which can contain amazing loot, but also ridiculously strong monsters which can end your character quickly making the player have to balance the risk and reward for entering such a place. These dungeons are completely optional but are a very nice option to have for those who just can’t get enough dungeon crawling. 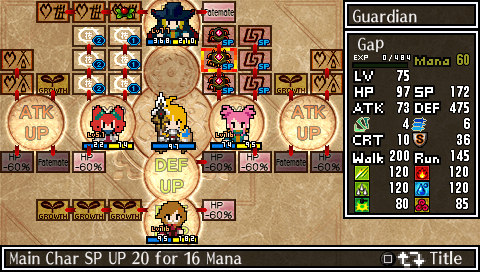 Now while the game may not sound too complicated, it is all an allusion. There is plenty of customization and deep amounts of gameplay but unfortunately the game does actually very little to explain to you how everything works. There are in-game explanations of the features but they are very shallow at best and there are a lot of details that can be left out. This means that there are plenty of things that will be confusing at first and some gamers may just never figure out as they make their way through the game which is something that is quite frustrating.

Overall:
ClaDun x2 may not be a very long game at its core, clocking in at around nine or ten hours for a basic run through of the story there is plenty of side things that can be done. Players can spend hours going through the optional dungeons looking through the best loot, or even editing their entire party of characters to become whoever they want them to be.

Sure the title is a PlayStation Network only release, but at only $19.99 it is also a very budget title which sports amazing characters and an extensive amount of dungeon crawling that has plenty of detail to keep those looking for an engrossing RPG experience happy.