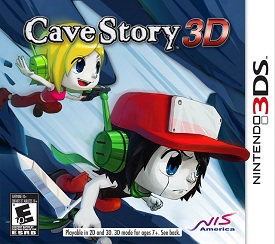 Overview:
Quite a few years ago Cave Story popped up on the internet for PCs as free game. The title itself was the creation of one man named Daisuke Amaya or as he liked to be called, Pixel. Pixel spent many years working on the title and the series saw widespread acclaim in the indie world. Then just one year ago the first ever version of the title outside of the PC realm was released and that was a minorly enhanced version for the DSiWare and the WiiWare.

Over a year has passed since that port of the title and now we have Cave Story 3D which has been brought to us by NIS America. With a new portable platform and a complete upgrade to the game’s graphics, plus the inclusion of 3D capabilities… how does Cave Story 3D fair? Let us find out.

Story:
Players will fall into the shoes of a robotic looking main character who happens to have absolutely no memory of who he is, where he is or why he is there. With no knowledge of where he even is, the player must make their way through a short series of areas before discovering a village of small bunny like people named Mimiga. However it seems that the main character isn’t the only person who isn’t a bunny, but he can’t meet this person so easily without the help of a female Mimiga who has become friends with this person.

In fact, as soon as the main character thinks he will be able to meet with this person, two lackeys of the “Doctor” who terrorizes and kidnaps Mimiga for his experiments appear and kidnap the female Mimiga right in-front of his eyes, taking away one of his few chances to find out more about what is actually going on. With the Doctor and his crew rearing their heads at nearly every turn and the Mimiga suffering under his reign, what can our main character do? 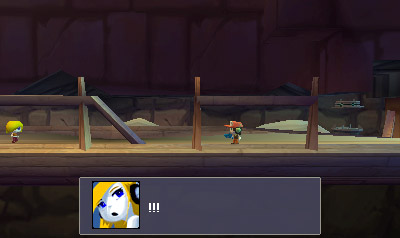 Now one of the strongest points for Cave Story is in fact, its storyline. There are few details given to the player at the start of the game and going into too much detail would take away from the clever twists and turns that exist within the story of Cave Story. With the players controlling a nameless main character, one of the biggest mysteries is of course who they actually are playing and why does he look like a robot?

Of course this is only one of the mysteries that are wrapped together in the very impressive story. While at first glance this title may appear like some simple platforming shooter, there is a reason that this is called Cave Story and not Cave Shooter you see. With memorable characters and a lot of unique twists that you won’t find elsewhere, Cave Story’s narrative will keep players wanting to keep adventuring through the various stages just to try and solve one of the stories many intertwining mysteries.

Graphics:
Perhaps the biggest reason to pick up Cave Story 3D if you have already played the other versions of the game is to see the title in its ultimate form. You can feel that this is what Pixel originally wanted for his Cave Story creation to look like if he only had the ability to do so back when it was first released. Now with Cave Story 3D, the titles true potential has been realized. 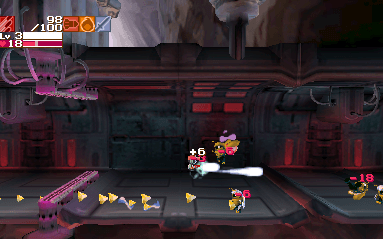 The environments will still be familiar but that familiarity is only a shadow of what they are now. This is because they have been revamped entirely, providing a full 3D world even though the game progresses along a 2D plane. The backgrounds and the environments themselves are absolutely gorgeous with tons of details and designs that help add to the atmosphere of the title, which is essential considering the variety of places you will be seeing. Though the details do sometimes make it difficult to judge the distance of a jump and can cause unnecessary falls due to the way they look.

Now as for the 3DS’ 3D capabilities. It is rare that you find a title that doesn’t make you want to turn off the 3D effects after a few minutes of playing. And a title that has pulled that off is Cave Story 3D. While most of the time in the past, I’ve had to turn off the 3D due to it either becoming obstructive or just did not increase the gameplay experience. However Nicalis has put an amazing effort into making sure that every little detail pops out at the player.

The 3D effects do a great job of creating depth for the stages with plenty of pieces of the environment sticking out of the screen. The foreground is obviously the best part of this, but with the depth of the background now it truly makes it hard to believe you are still running along a 2D plane. Still, there is one problem with the 3D and that is that the title is rather dark, and with the 3D turned on it can be even darker. So the only way to counter this is to turn up the brightness on the 3DS and therefore punish your battery life more, making players need to have to go charge up the 3DS before long and have to take an unwanted break from Cave Story 3D.

Audio:
Unfortunately there are is no voiced dialogue in the title and while there were no voices in the past iterations of the title, this is a bit of sad news as it would have been interesting to see what some of the characters would have sounded like. But considering there aren’t any voices, the title does a stellar job of making up for their absence with a rather impressive soundtrack which has been upgraded from the original. 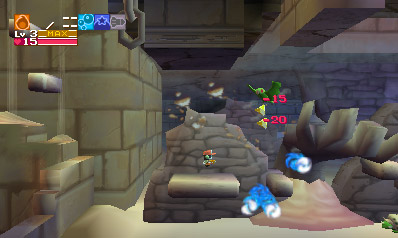 Now in the past versions, players were listening to chiptune like music that sounded like something from around twenty years ago. Now while that sounds like a bad thing on paper, the audio was so well done that it felt nice and nostalgic. That is why when the developers upgraded the soundtrack for Cave Story 3D they knew what they were doing when they hired Danny Baranowsky to do the upgrade. For those unfamiliar with Baranowsky’s work they need look no further than Super Meat Boy to understand what his music sounds like.
Baranowsky’s skill with more retro sounding music creates an exceptional mix of an upgraded soundtrack that still retains most of its feel from the original while sounding a whole lot better. This was done by keeping the production rather simple and only allowing a few flourishes of sound while keeping very close to the original, creating a combination pleasurable to both old fans as well as new ones.

Gameplay:
For those concerned about the way the game plays, there is no worry whatsoever as the title has retained all of its old style side-scrolling platforming along with plenty of enemies to shoot. For those who don’t know, Cave Story 3D is a side-scrolling title with platforming sections and they will need to shoot and eliminate various enemies who can kill them if they happen to take too much damage.

You will be doing plenty of damage to enemies with quite a unique variety of weapons. Of course players can only carry around five weapons at a time, though there are ten to find overall. The player will stumble across a number of these weapons without much searching but there are also a few hidden ones to help provide a challenge. Now the interesting thing with the weapons in Cave Story 3D is that they upgrade in level separately from the character. 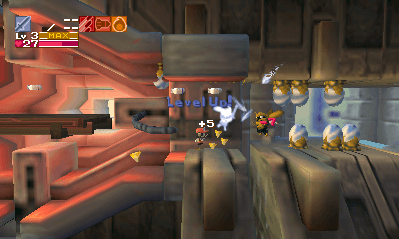 While the character finds HP upgrades littered throughout a level, weapons are upgraded through killing enemies and collecting the energy crystals that drop from them. The interesting thing here is that if the player happens to suffer damage of any kind the weapon they have equipped will drop in experience slightly. When a weapon upgrades a level they will grow stronger in some form, usually increasing in damage, range or even how the projectile itself looks.

One of the biggest challenges in Cave Story 3D is managing your weapons well enough that by the time you reach the boss battle near the end of an area, you still have enough to be able to take it down quickly and effectively. That is because the boss battles can be extremely difficult in Cave Story 3D and often rely on quick reflexes to avoid being damaged and potentially killed by the enemy. The game does a well enough job of walking you through most of the mechanics at the start, including a simple boss fight but grows to be much more difficult early on.

Now as a whole, Cave Story has five main areas with various hubs and mini zones linked to those areas. The stages you visit even end up changing over time as you progress through the story, so a visit to one area could be completely different from the first time around. This diversity is only helped by the fact that each section has some unique feature that forces the player to play differently due to either level design or the enemies placed on the stage. This keeps gamers from growing tired of the title quickly and always keeps them on edge. 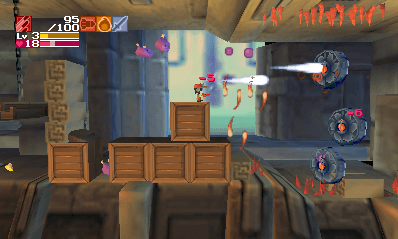 On the other hand, as far as new content goes there really isn’t a whole lot added into the title from its original counterparts. There are four new areas that have been added into the title which can be explored and they are integrated seamlessly into the title without any noticeable problem. Plus if you decide to adventure into one of these new areas you will walk out with a nice little NIS surprise to go along with your main character from then on. Still, with Cave Story 3D being a completely upgraded title, the low amount of new content is questionable.

Overall:
Cave Story 3D can be seen as the ultimate form of Cave Story, with a massive increase in the visual department and a few bonuses added on, players of the older versions will find themselves enjoying every second of the title despite playing it before. Newcomers will be able to experience the 2D side-scrolling platformer in lovely 3D as well, though it is definitely concerning as to why there isn’t any more bonus content added onto the title in the end.

In the end however, Cave Story 3D may give you a reason to take that 3D slider and turn it all the way up and leave it on finally, as it harnesses the best of what the Nintendo 3DS’ 3D capabilities have to offer and provides not only a fun experience but one that can be played multiple times over as you explore the world multiple times simply to make sure you see everything that there is to see.