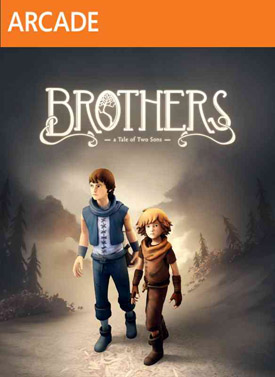 Brothers: A Tale of Two Sons is story of two brothers who set off to find a tree which can cure their sick father. In this modern fairytale, you control both brothers, solving puzzles and heading across the game’s vast landscape. The game is filled with beauty and horror, love, loss and sadness and is an experience unlike any other on Xbox. Unfortunately the game is ultimately let down by its frustrating controls, which results in an experience that is far more fun to watch than it is to play. 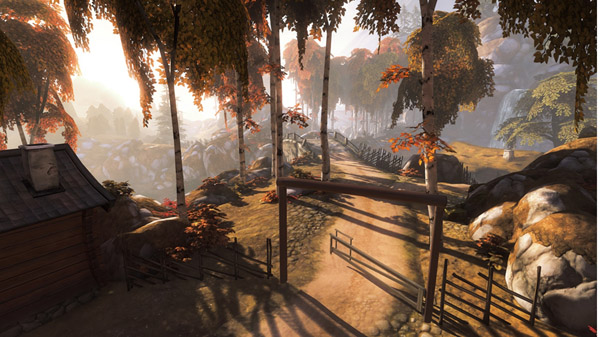 Brothers is a modern take on the fairy tales that your parents used to read to you as a child. It has all the things you would expect; trolls, rolling countrysides, big bad wolves, giants, and a life lesson about the world around us. Although the game begins with a tragedy, the beginning sequences are still brightly lit and have a kind of charm and carefree nature to them that makes you feel safe and happy. This false sense of security makes the game’s eventual turn into dark territory really jarring.

The game’s pace is fantastic, and the sudden shift in tone isn’t jarring because it doesn’t flow with everything beforehand or anything like that, but simply because the developers wanted you to feel safe in this world, and that is suddenly stripped away from you. The point that I noticed that “We aren’t in Kansas anymore” was when I saw a man tied to a tree preparing to hang himself. Having just come from saving a happy duo of trolls, this was quite a shock and even without the game prompting me, I rushed towards the man, even though it was completely out of the way of where I was supposed to be heading. 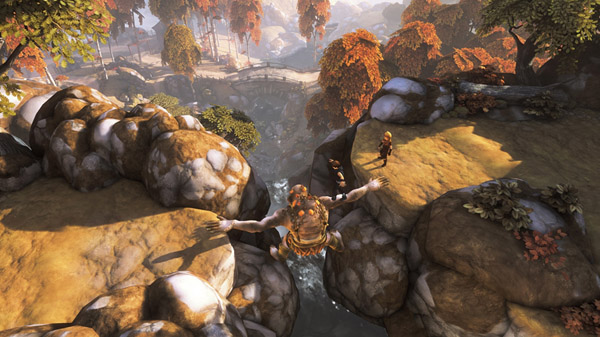 Moments like this happen several times through the game (usually accompanied by an achievement for you hunters out there), and they are the kind of moments that allow you “take the good with the bad.” a brightly coloured landscape may have a man about to hang himself, but a dark and twisted forest may lead to something beautiful.

There is no dialogue in Brothers, not a single bit. The closest you get to actual speaking is when the brothers talk in a nonsensical language (without any subtitle translation). I initially was taken back by this, and was disappointed in it. However as I got into the game, I saw that the non-verbal communication plays a huge part. Everything from how the brothers react to certain objects, through to characters and threats looming in the distance. Brothers masters the art of the non-verbal communication, and this allows the player to flesh out the story on their own, as well as projecting their own imagination into the setting.

The brothers each act differently to any situation, which allows character building and depth to shine through even without a single word being uttered. Be it mourning over the death of a friend, or playing basketball with a kid from the next village, the brothers react differently and uniquely to the situation at hand. This becomes prevalent later as the game goes on its dark path. 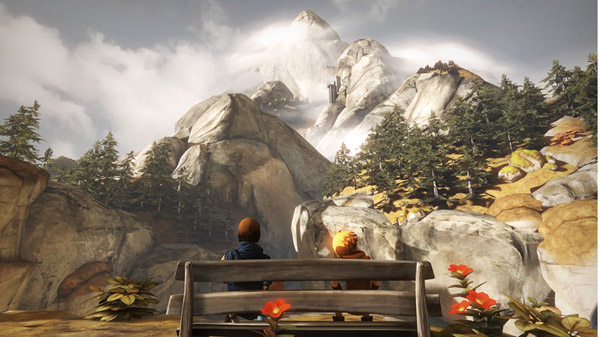 Underneath its vibrant, fairy tale setting, Brothers is a puzzle game. You control the two nameless brothers on their journey across the land, utilising their strengths and weaknesses to solve puzzles and get ever closer to the tree that will save your father’s life. There is no real combat in Brothers, where even the boss fights are simply just puzzles you have to solve more expediently than others.

In order to solve the puzzles, and traverse the game’s surprisingly large world, you control both brothers simultaneously. That’s right, your job is to maneuver two players simultaneously. Each brother’s movements are mapped to a different thumbstick, which they also have their own interaction button. ‘Older Brother’ is controlled using the left side of the controller, while ‘Younger Brother’ is done using the right. The controls are simple, fluid, and responsive but they do suffer from one huge problem: they are incredibly frustrating. 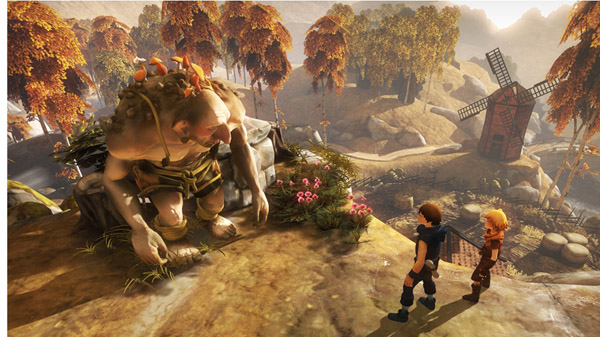 Despite the ease of control and the simplicity behind the game, moving the brothers along feels like rubbing your stomach and patting your head at the same time. You will probably think to yourself that it is an easy thing to move two characters at once, but you couldn’t be further from the truth. All it takes is the briefest lapse of concentration and you will be running one of your characters into a wall, or dropping him from a ledge, putting a premature end to the puzzle you are trying to solve. While I was playing, I was trying to tell myself “it is ok, you’ll get used to it,” but you just don’t. Moving two completely different characters at the same time is foreign and the brain and fingers just don’t like it. It is especially bad if for some reason the brothers cross paths on screen, my brain flipped out whenever it happened and it took me a few moments of wagging my thumbs around on the control sticks to regain proper control.

I also had some troubles trying to get used to how the camera moves. Camera controls are mapped to LB/RB and rotate around in a circle when you press the corresponding direction. The problem is that (for me at least) the direction the camera moved felt awkward. Pressing LB would cause the camera to spin anti-clockwise, while pressing RB moved it clockwise. It, much like the other controls in the game just felt foreign and unintuitive. 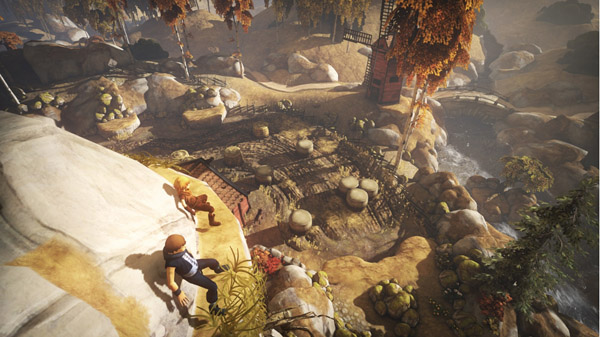 The landscapes and backdrops for Brothers are to put it mildly; absolutely beautiful. From a viking/nording inspired township through to cliffs littered with the corpses of fallen giants, everything looks like a wonderful piece of artwork. There were many times through the game where I would just stop and stare off into the distance, taking in the beauty and wonder that the game was showing me. 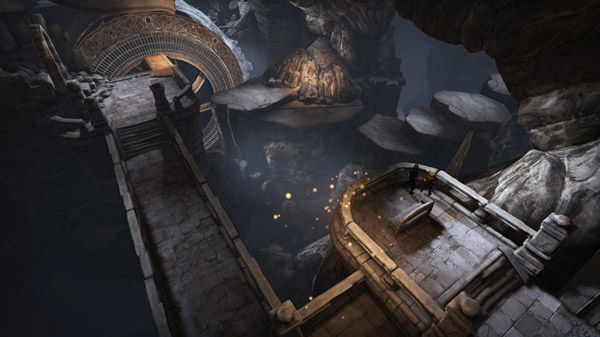 Lighting plays a big part in the game’s beauty. Even though the game had a distinctly cartoonish feel, the golden glow of a sunset against the leaves of a tree just looked so real and natural. The beauty of the landscapes also allowed for some amazing juxtaposition with the darkness of the world, and vice versa. There is a definite emotional feeling after overcoming a hardship, to be greeted with a beautiful sight, and Brothers catches it perfectly.

The only problem with the visuals is that the same love isn’t put onto the character the models. Although the brothers in particular still look great, they are no where near as refined and great looking as the world around them. Usually this is not noticable as the camera stays a nice distance away from the brothers, but still those moments where we are looking at their faces and clothes up close make them look flat and uninspired. 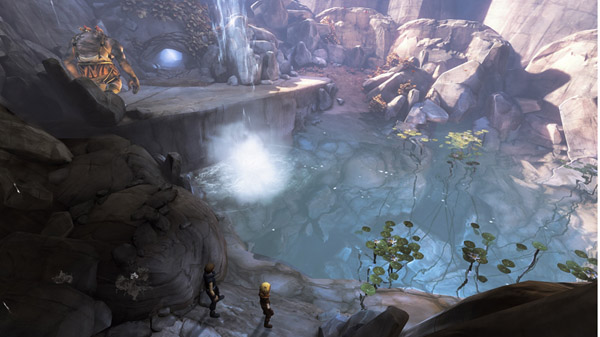 The music for Brothers is expertly composed, and insights the same emotional experience that the visuals do. The combination of a beautiful backdrop and soft, humbling music is enough to just make you stop and stare for minutes on end. Conversely, the feeling of a brightly lit, colourful area can be sapped immediately by somber, depressing music.

Music captures people in a way that no other art form can, and its use here proves that. Without the background sounds, the game would just simply not be the experience that it is. 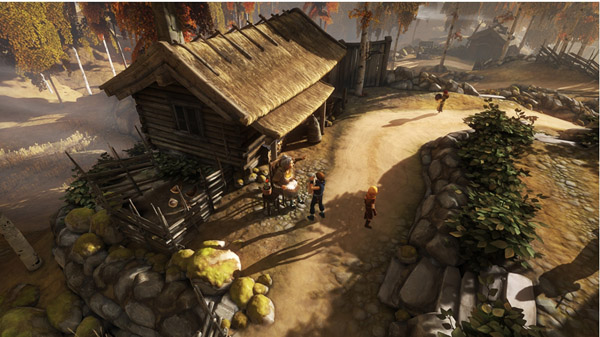 With its themes of love and loss, as well as a story that is largely left up to the player to interpret, Brothers: A Tale of Two Sons is definitely a modern fairytale in every sense of the world. Its gorgeous backdrops and engaging characters make this not only a worthy title to download, but make it more than worthy of being the first game released in this year’s Summer of Arcade. It dares to be different with its controls and gameplay, and although it doesn’t always hit the mark, kudos have to be given for trying. Brothers could very well be Xbox’s answer to Playstation’s Journey, a unique experience unlike anything else available on the console. Sadly, I think that Brothers will always be remembered for its shortcomings, which is a shame because what it does well, it does really really well.