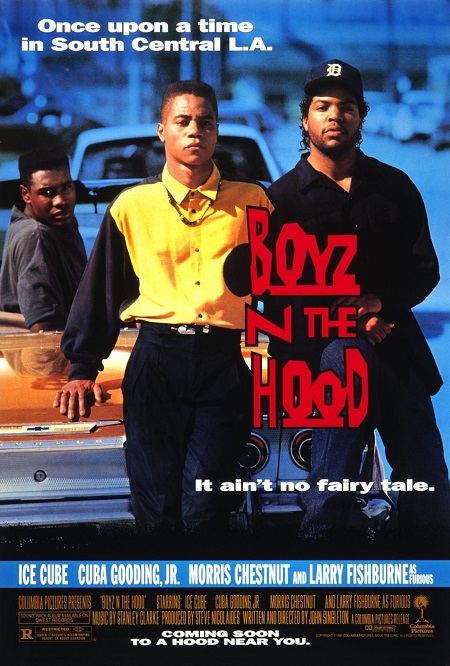 Before being called up to review Boyz n the Hood, I had never heard of it nor knew of its prominence. I’m a fan of television dramas such as The Wire and the recently released Luke Cage which both deal with life as working class/underclass African-Americans but somehow missed hearing about this film which was written and directed by John Singleton. In consideration for the recent political and social upheaval in the United States today, thanks in part due to movements such as ‘Black Lives Matter’ raising awareness of police injustice against African American citizens, a classic such as this deserves to be screened once more in a theatre. Not just as a celebration of its craftsmanship or its status as a cult film, but as a reminder of how little things had changed in regards to the lives of African Americans living in the United States in over two decades. I walked down to George St cinemas to watch the In the House screening.

The MCs for the evening were David ‘Quinny’ Quinn and Jason ‘Jabba’ Davis who started off the evening by having a quick game of ‘heads or tails’ with the entire audience. After a couple of rounds, the lucky winner walked away with tickets to go jetboating Darling Harbour. An unusual, but welcome, addition became introduced when Quinny and Jabba sat down to talk about the film. One of the audience members on the night was (I believe) a former journalist who was in the United States during the events of the Rodney King beating and the subsequent Los Angeles riots. He provided an interesting perspective on the themes and narrative elements of the film which I would not have otherwise experienced at a regular screening. An advantage I would not have experienced without the audience interaction which In the House facilitates. 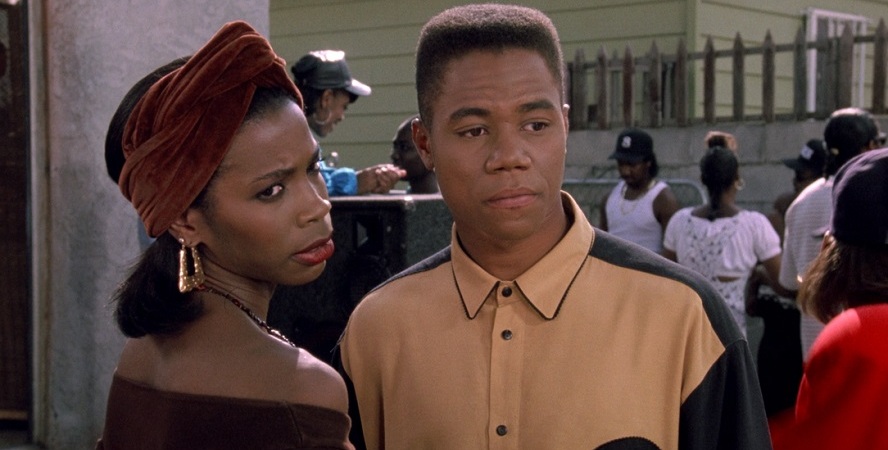 The film follows the life of protagonist Trey Styles (Cuba Gooding) from childhood to young adulthood as he grows up in South Central Los Angeles. Life in these rough and tumble neighbourhoods is far from ideal as we see Tre and his friends, Doughboy (Ice Cube), Ricky (Morris Chestnut), and Chris (Redge Green), as they navigate the dangers of living in this dangerous environment. Luckily, with the guidance and support of his father, Furious (Laurence Fishburne), Tre is able to grow up into a well-educated and conscientious young man. When tragedy strikes, however, Tre is forced to make a choice between the values that his father taught him and the values which he was exposed to while growing up in the hood. 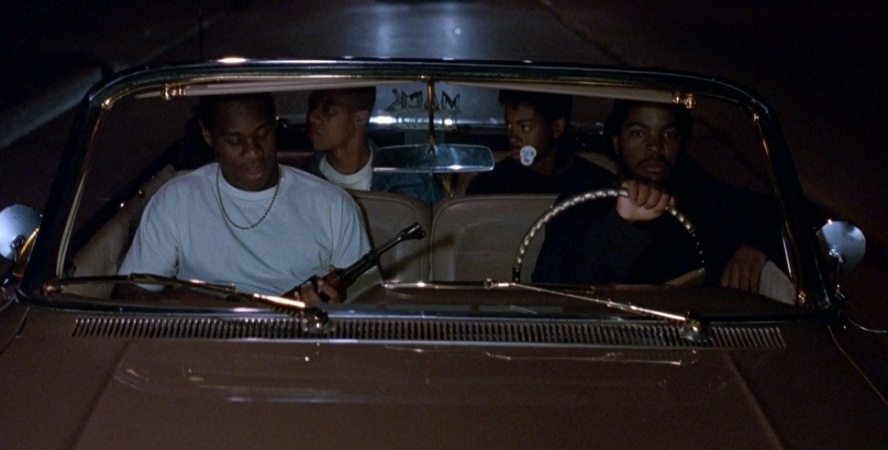 I absolutely loved the script of this film. The narrative has all the hallmarks of a Classical Greek tragedy on the same level of Oedipus Rex. There is an overarching sense of inevitable doom which hangs over the heads of all the characters which evokes the destined downfalls of the protagonists of those classic stories. The dialogue itself was very naturalistic with characters engaging in the African-American street slang which I’ve gotten used to since my foray into The Wire. It grounds the characters and action in a sense of realism which heightens the emotional effect of the narrative. As characters talk about everything from women to sport to the gentrification of African-American neighbourhoods, it all feels like it has a greater purpose and an impact upon the wider plot. The personal drama we see in the hood becomes representative of the systemic inequality which African-Americans face.

The performances from the cast were strong throughout with a couple of actors standing out. Fishburne in particular does an amazing turn as Furious by giving him an intellectual gravitas which is still very much grounded in the reality of the street. Furious is equal parts street smart and politically astute as he gives Trey (and the audience) pearls of wisdom from his experience of growing up in the hood. Gooding also does a good turn in giving emotional depth to Trey as we seem him grapple with the conflicting facets of his personality. On the one hand, we see Trey as the ‘street’ side of his personality as he postures for his friends but we also see his vulnerability when he breaks down to his girlfriend. Both of these actors had the acting chops to create a strong onscreen presence which made for captivating cinema to watch. 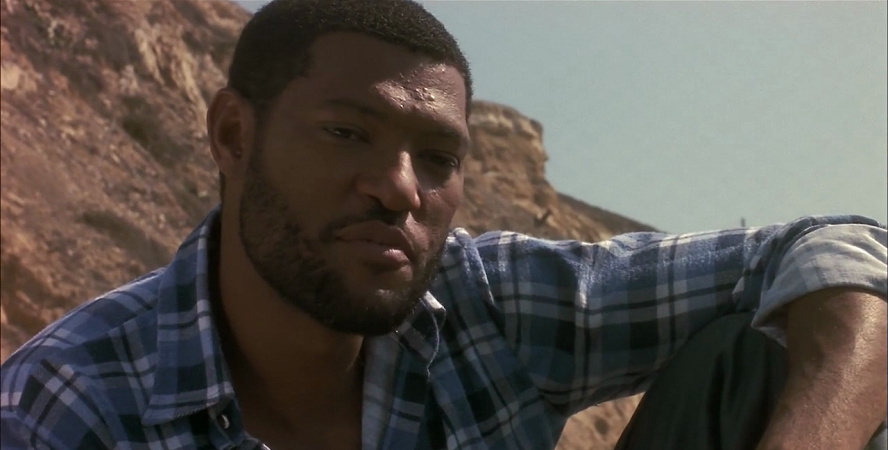 The visual style of director, John Singleton, is quite creative with his use of montage to create tension. The scene where the film’s penultimate tragedy unfolds in quick cuts between shots of the possible victims and their rescuers trying desperately to save them. The quick cuts followed by the slow motion as the anticipated event finally unfolds is a harrowing experience with tension ramping up to the sequence’s climax. It helps us to see these moments from multiple perspectives and give a sense of uncertainty which a more linear sequence would not have given. 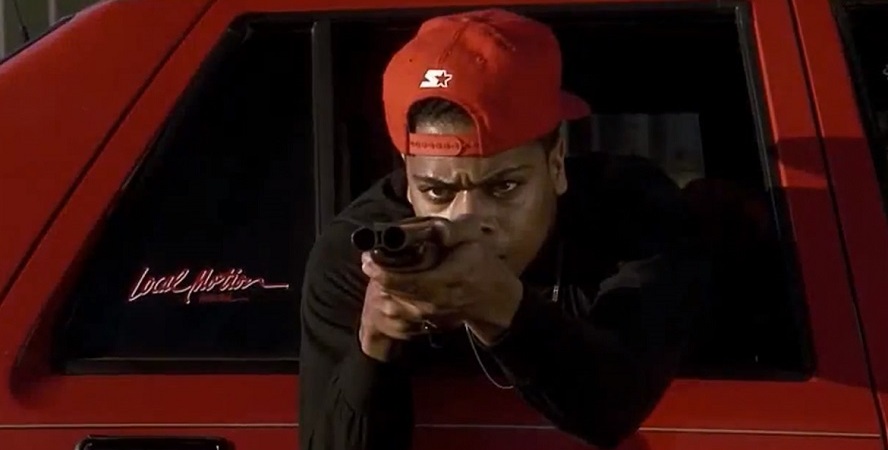 The film’s score features an eclectic mix of jazz and more urban pieces. A lot of the diegetic music fits the tone of the misé-en-scene with the heavy use of Rhythmn and Blues, Rap, and Hip Hop. The films creates a soundscape for the street and the ‘hood’ by using these pieces as an audio cue for its audience as well as paying homage to the musical works which manifested in these environments. The rest of the score features a brooding jazz score to generally heighten the tension the audience feels as the story unfolds. 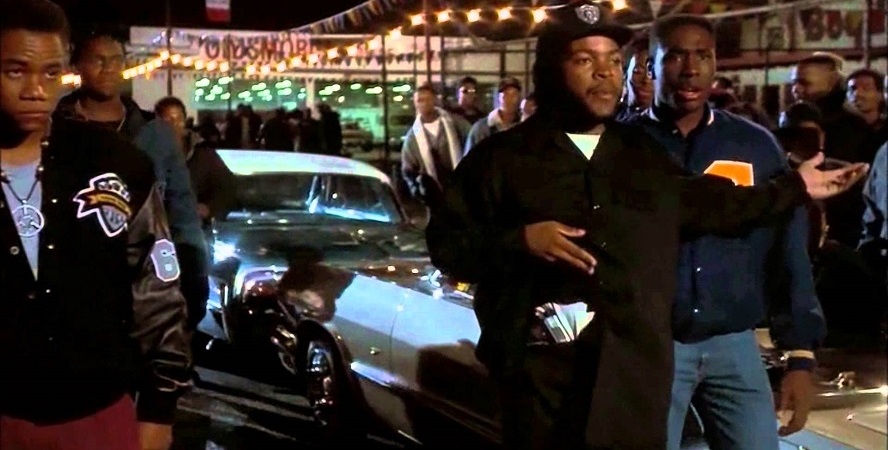 I very much enjoyed this film and was very glad to see it up on the big screen. The story may set itself in the poorer neighbourhoods of L.A., but its soul comes from the same tragic line as the works of Sophocles. The director’s visual style helps to reinforce the tension of the film’s narrative with montage. The film’s soundtrack similarly reinforces the tension and themes of the narrative through a mix of jazz and hip hop pieces. This film gives a confronting account of life in these marginalised, African-American communities but does so with great style and talent. This film is a masterclass on how politics and the cinematic art can come together to make a statement about the world we live in. It’s a film which I’ll definitely sing the praises of to my friends, and one that I have no problem recommending to anyone who wishes to watch drama which is a bit heavier. Kudos to the In the House for screening this film!

Boyz n the Hood is a modern masterpiece dealing with the systemic problems facing African-Americans living in the US.
9